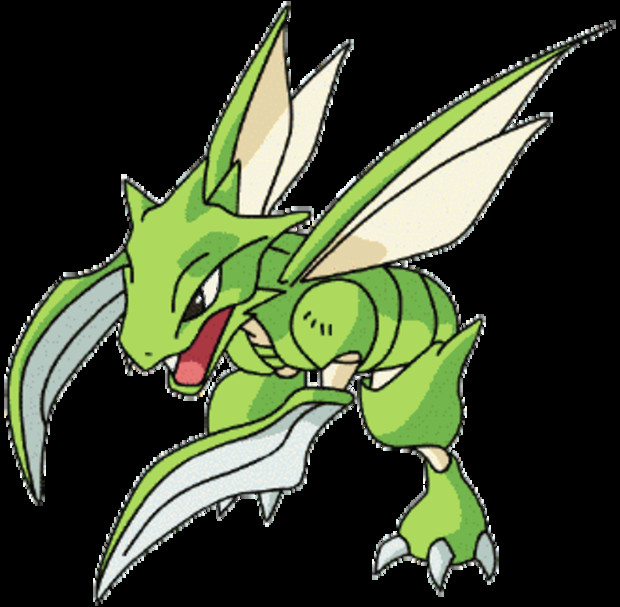 Scyther (ストライク, Sutoraiku?, Strike in original Japanese language versions) is a mantis Pokémon. Its English name was originally going to be Stryke, as revealed in the 1999 Nintendo Official Magazine Pokémon Special #2. Scyther's most impressive feature is its scythe-like arms that can easily cut through metal. Scyther is also noted for its agility. While hunting in the wild or in a battle between trainers, it relies on its speed to strike quickly and to avoid being struck in return by its foe. Its high-supernatural speed can make it seem to be in more than one place at once, or to seem invisible as it moves in, strikes, and leaves the opponent before he can feel the blow. Scyther's wings are capable of flight, but this is rare; it is not a fast or an agile flier, and it is a better hunter on its own feet.

In the anime, Tracey Sketchit catches a Scyther in the Orange Islands. It is aged and was recently removed from its clan by a younger, stronger Scyther. The bug Pokémon reconcile their differences through the interference of Team Rocket, and Tracey's Scyther is allowed to leave with him with its conflicts fully resolved. Tracey's Scyther is incredibly strong-willed, preferring to keep watch over the travelers while they sleep, as opposed to staying in its Pokéball. In the Johto arc, the Azalea Town gym leader, Bugsy, uses a Scyther against Ash, But this Scyther uses Sword Dance to repel fire attacks. Ash had Cyndaquil jump and use a Flamethrower from above Scyther when he was using Sword Dance to beat him.

GamesRadar described Scyther as one of their office's favorite characters, praising its abilities and adding "plus he just looks cool", adding that it continued to look fierce even after its evolution into Scizor.[9][10] IGN noted their various weakness, though descrbied them as "so popular it's sickening" and praised its design, naming Scyther the best of the Bug-type Pokémon to appear in Pokémon Red and Blue and made stronger with its evolved form.[11][12]

Scyther is my favorable Pokemon and if you disagree with me then you can die off because it's my opinion and not yours. True story, in Pokemon gold I transferred a weak level 23, yes I remember, Scyther to my team early on and dominated the game with him.
#AboutDestructoid    #Community
Login to vote this up!