Without Slenderness, there's something missing. 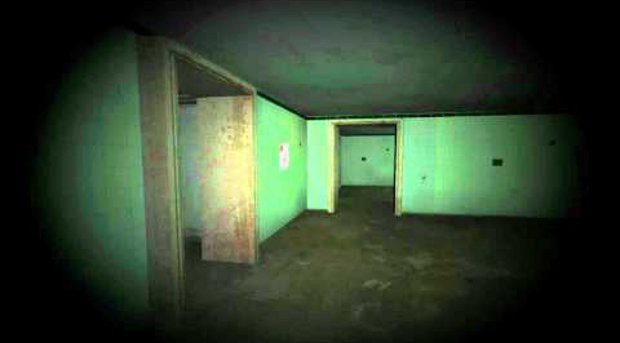 Hospice, on the other hand, is much more labyrinthine, with same-looking rooms in a crumbling, medical residence facility making things that much more confusing. There are some select landmarks that help a bit, and the addition of a stash of eight glowsticks to the player's inventory seems meant for leaving a trail or marking already-visited rooms, but the facility is sprawling enough that such a Hansel-and-Gretel move is only slightly helpful. This time around, the notes in question comprise lines of a poem about Slender Man you're attempting to complete, which is displayed as far as you manage to collect following your demise.

And Elementary, the third offering from Slenderman's Shadow, takes place in an abandoned school building, expectedly enough. With an introduction accompanied by a recitation of Ring Around The Rosy, a creepy mood is set right off the bat, and is quickly ramped up once you find yourself searching for teddy bears that have been impaled on brutal-looking hooks on the walls of certain classrooms. Other hooks feature human bodies, presumably some of the teaching staff, and there are clear signs of violence and struggle in many areas, in the form of bloodstains and scattered furniture. One of the best parts, however, is the wide, open courtyard in the center of the level, which offers a clear view of the darkened sky above and is just cluttered enough to offer Slendy plenty of places from which to pop out.

On top of what they've delivered thus far, the Slenderman's Shadow crew have at least seven more maps due to release by the end of 2012, including Mansion, which is expected as soon as September 8th. Clearly aware of and engaged with their fanbase, their site also features a tiered donation bonus table, from getting your name on the donors list for as low as $2.50, to letting contributors suggest and help design a level if they have $100 sitting around. They also feature a sizable archive of reaction videos and a few vids documenting their design process, and are open to submissions from pretty much anyone.

It was surprising enough to see the rise of the Slender Man mythos in and of itself, and it's exciting to see the games that have spun off the original meme rocketing into their own cult following in a similar fashion. Between Slenderman's Shadow, and forthcoming projects like The Intruder, it seems as if Slender Man has single-handedly (or single-tentacledly) brought about a renaissance of survival horror, even as the stalwarts that created the genre of the first place (like Resident Evil and Silent Hill) collapse into relative mediocrity. If you're looking for some solid spooky, check out Slender and the Slenderman's Shadow selections, and make sure you play with headphones on and the lights off.
#ShareonCommunityBlogs
Login to vote this up!