There are two kinds of people who don't have the r-word in their vocabulary. 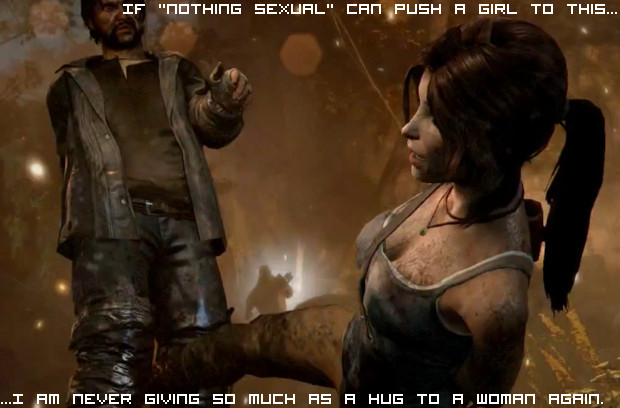 That, along with several other reasons, is why I don't think games are a medium yet equipped to address issues of sexual violence, implicitly or explicitly. The bulk of games that have dealt with sexual themes, even on a consensual level, tend to treat the subject as a throwaway in already mature-rated games, and do little more than attempt juggle and justify the addition of such content rather than actually legitimizing it as an element of story or gameplay. Watching the reactions all of fifteen to twenty seconds of footage from a teaser trailer grow into a PR circus is a pretty solid indicator that, while they wanted to push some buttons, and maybe even sincerely address a serious, real-world issue in Tomb Raider, no one at Crystal Dynamics was actually ready to discuss it. It's a damn shame, too, because aside from all this nonsense, the game looks pretty good.

If you're not prepared and equipped to to defend a choice to include a hot-button issue as a key element in your game in the face of inevitable scrutiny from fans and media, or you're simply ignorant of the likelihood of such inquiry and/or backlash, then maybe, just maybe, you should reconsider including that content in the first place. I, for one, am all for games trying to do new, different, and possibly controversial things for the sake of progress and expression, but if such things are being done without genuine concern for the topics at hand and lack cohesive support from the creative minds trying to do those things, then it's all for naught.
#ShareonCommunityBlogs
Login to vote this up!