The streets are empty, the doors are all locked. But something is at large. Something is running through the alleyways, rummaging through the bins, clawing at the brick work. Close the curtains, check the doors are barred and pray, pray for those brave men and women who defend our city. Defend it from the scourge, the beasts; those which keep us locked away at night, which persist the curfew. Those which might, any minute now, tear through the barricades which bar your windows, through the thin veil of your curtains, and gorge on your blood.

When watching The Boxtrolls the other night it struck me that it was very similar in setting to Bloodborne. A grotesque gothic city, a mysterious plague of monsters, curfews, malicious hunters, a high society conspiracy. But it also made me appreciate the unusual place Bloodborne story starts from.

While The Boxtrolls is all about saving a city from a horrifying situation, Bloodborne’s city of Yharnam is presented as far less salvageable. Or at least, the plot and protagonist – the player – is, to begin with, not in the least interested in solving the problems Yharnam faces. Instead, they’re looking for a cure to their own affliction; some kind of blood disease, we can suppose. And that’s their impetuous: a personal quest for a cure, leading us through the blood-soaked chaos of the city and the surrounding countryside. 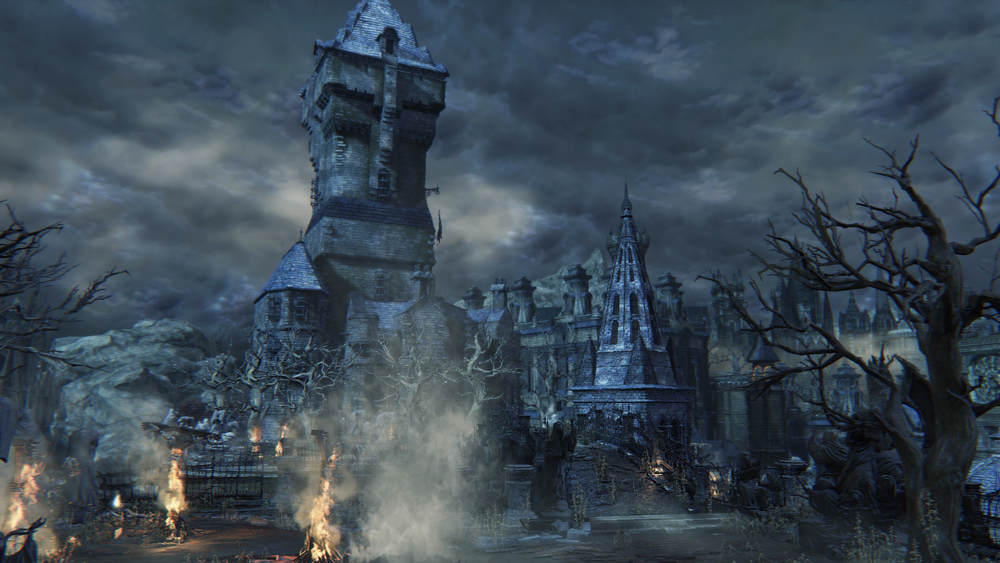 Yharnam itself feels like a city at war. As soon as you step out into the streets, it’s clear that there’s some kind of conflict happening. The place is alive with disorder – and disturbingly foreign! The locals are a spiteful, unwelcoming lot; often unwilling to offer any refuge nor any sympathy for the outsider. There’s a sordid ignorance at work throughout the city, made all the more disturbing by the unexplained and violent rituals being carried out on the streets.

The sense of oppression in Yharnam is incredibly palpable and to my mind not only is it one of the most densely designed locations in one From’s Action RPGs, it also shows the studio at their best in terms of world building.

Our protagonist, being the foreigner, has no one to turn to. Unlike The Boxtrolls, where our main protagonists are already settled in their own social groups (ready for the story to pull them all apart), Bloodborne’s Hunter is alone. Showing a refreshing generosity with their NPCs, From Software develops this city of hidden, suspicious citizens; racked with fear and distrust. Violence is a staple of From’s ACRPG games, but in Yharnam, more than anywhere else, it feels like this violence has a substantial impact on the world. People are cowering here. They are psychologically disturbed by it.

It’s a shame that this dense multi-faceted world building isn’t be maintained at this level throughout the game, and noticeably drops off when the player leaves Yharnam. Instead, the game gives us more of the direct violence. This, I should remind myself, is the staple of these games – they are ACTION RPGs after all – but sadly Bloodborne starts to feel more and more like a hack-and-slash-game the further you go.

Unlike Demon’s Souls and Dark Souls, Bloodborne provides the player with enough ‘stamina’ to attempt most fights without thinking too much about it. Though the game still requires stamina management, there is less chance of it being drained by blocking with a shield and more emphasis on avoiding enemy attacks – which in this game requires less stamina. This is not an objectively bad direction to go in, especially considering that many players had mastered Dark Souls enough to play the game without a shield. Equally, and perhaps more critically, Bloodborne is clearly a game designed around quicker movement and reflexes, rather than blocking attacks and deciding the next move. Often the best course of action is to rush enemies, stun-locking them before they can attack you.

This is Bloodborne though and it cannot be marked down for encouraging the player to be more violently aggressive. And in theory I like that, I like it a lot! On a thematic level as well, the fact that the world of Bloodborne requires such aggressive, unstoppable violence is pleasantly ironic in a morbid, thin-curled-grin sort of a way. There’s a sense of poetic irony to the Lovecraft protagonist who, after months of isolated study and reclusion, is finally devoured by some violent beast (see The Hound). And that same sense is to be found here too.

Bloodborne’s plot also involves an intellectual, theological pursuit. A theological pursuit GONE WRONG, no less! Academics and theologians have studied the heavens and delved deep into the Earth to ascend Man’s paltry understanding of the world, to gain a higher form of knowledge. And here we are, following the bread crumbs of their cerebral investigation, coated (literally, graphically) in blood and guts.

And finally, when we find the answer to this religious conspiracy, it is a sorry looking thing; or a flailing beast. What, then, is there to ascend to?

I think that Bloodborne, like many works of modern horror, is really about how inescapable the human body is. Here it has become fetishised by Yharnam culture – the blood, the eyes, the bodily transformations; but also there is a mad need to escape. The upper echelons of the society, who all want to ascend in some way or another, are the ones who bring about this body-madness in their citizens. It’s body-horror, but on a grand, societal scale. And we must cut our way through it all. 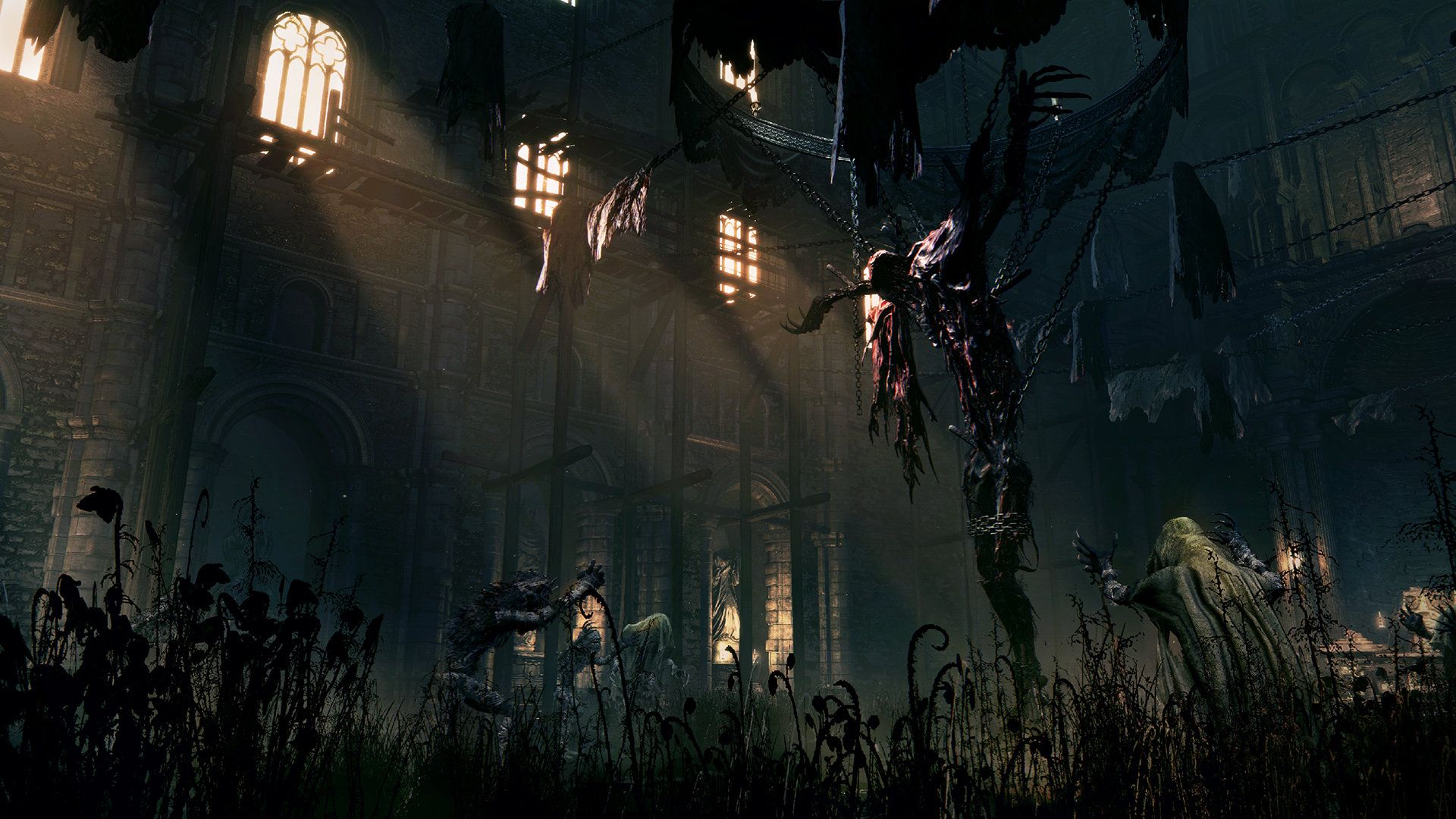 On a practical level however, I found the combat tiring. Like I said, after Yharnam, the game starts to feel more and more like a mindless hack-and-slash game. Certainly, stamina management does alleviate this a bit, but not to the point where combat feels as dynamic as Demon’s or Dark Souls. The best strategy is often to rush forwards and attack quickly, but after a while this becomes exhausting. For me this exhaustion is most easily attributed to the game’s sound design, which spends most of its time battering the player with wild screams and the sound of skin tearing. By about halfway through the game, these sounds had all but coagulated into some kind of eldritch ectoplasm, dribbling out my ears. Enemies scream at you, bosses scream at you, and then you rush forwards and rip them apart – whilst they scream some more. This comes to a head in the final boss of the game’s add-on content, which is by far one of the most unenjoyable challenges in this thematic franchise.

It is however, by its nature, an abrasive game and as such my criticism that it is too much so – especially in the sound department – is not going to be the same for everyone. I do think, however, that they could have provided more variety in gameplay. Bosses for instance, have, in Souls games past, provided these moments of difference – either in scale or by encouraging (or requiring) unique strategies. As a studio they’ve never been hugely successful at this, but it has added at least a different dynamic to the player’s adventure. In Bloodborne, it feels as if they wanted the player to perfect a particular type of combat – that this provides enough depth of experience to carry the game. Personally, I could have done with a few more unique encounters to punctuate the journey.

That said, Bloodborne, by most metrics, is a significant achievement in horror. For horror videogames it is a certifiable epic. I would have preferred more variety to the gameplay, something which I really hope From Software will explore in their next game, Sekiro. But in terms of visual design and plot this is one of the studio’s most accomplished games.

[All the images from http://bloodborne.wikia.com/wiki/Bloodborne_Wiki credit to whoever created them.]