A look back at Far Cry 1

2004's Far Cry certainly stands out nowadays as one of the more unique entries in the series. It was the first game Crytek had ever worked on, and it certainly was quite a leap in tech compared to its competition. Yet despite how much of a splash it made back then, nobody really mentions it these days. With Far Cry 6 scheduled for a 2021 release and how popular the series has gotten over time, it seems rare to see people acknowledge the original game much these days. It’s this lack of interest that made me curious enough to check it out, and the results were certainly interesting to say the least.

What makes Far Cry 1 so interesting to look at now is just how little it has in common with the series as it currently stands. The plot is pretty basic, with Jack Carver roped into an undercover CIA operation to take out a mad scientist called Dr Krieger and his mutated experiments known as the Trigen. There’s the odd twist here and there and it does a nice job building up a sense of mystery in the game’s opening levels, but storytelling definitely wasn’t Crytek’s priority here. Most of the plot was told through radio chatter and the odd cutscene, though it makes up a very small portion of the game’s runtime. It’s not anything really memorable but I did like the cheesy action movie feel since it never itself too seriously, which made the journey a fun one at least. But the gameplay was where Crytek put all their effort in, and it’s here where opinions will be mixed about the game.

The best way to look at Far Cry is as a rough draft for the original Crysis. There's no open world to speak of but much like Crysis the levels it has you explore are downright massive, with plenty of paths to go down and approaches to take. That's not the only similarity though, as both games have a mix of stealth and action, a slow introduction of new weapon/enemy types, and both games can put up quite the challenge on the higher difficulties. While the AI here isn't the smartest, you'll still need to keep up your guard up since enemies are sometimes positioned throughout the levels in ways to keep your guard up.

In a way it's kind of amazing how much Crytek's first game has held up over time. Now familiar tropes like tagging enemies with your binoculars so they show up on your radar was introduced here. Guns sound good to use and they feel great thanks to satisfying ragdoll animations, and there's a decent weapon selection to choose from. Sound effects still sound nice and clear and while the music isn't anything groundbreaking it definitely suits the action happening on screen.

And you certainly can't talk about a Crytek game without mentioning the game's graphics, which all things considered haven't aged that bad. Some parts of course, they certainly haven't held up over time, but for the most part the game's outdoor environments still look great. They're nice and colorful, and feel almost dreamlike like something straight out of a Windows XP wallpaper. Character models are about on par with what you can expect for a game around this time, but stacked up against its competition and Far Cry arguably stands tall as the most visually appealing of the bunch. Not everything has held up though, as certain elements like the stealth system definitely feel unpolished. You can hide in tall grass and throw rocks to distract enemies, but it never really works out in my case. Throwing a rock immediately put all the enemies on high alert, to where I found that it was a bit easier to poach them from a distance. You do have a stealth meter but you’re not really given a ton of options to take a stealthy approach, you get a machete and a silenced SMG, and that’s about it. Even then stealth becomes pointless anyways in the later levels since you’re almost always forced into gunfights.

It’s here where the game starts to dip in quality, since the Trigen become a common enemy type at this point. The humanoid jumpy and stealthy variants really aren’t a big deal, but little ones are fast as hell and they’re able to take you out in just a hit or two, which makes it more annoying when it feels like they can take almost a full rifle magazine before going down. The worst of the bunch were the ones called the Fat Boys, who spam rockets and are massive bullet sponges. On top of that more heavily armed soldier variants show up with RPGs and sniper rifles, which make some of the later levels a chore due to a lack of quicksaves.

A few of the levels also become more claustrophobic due to taking place in labs or bunkers, and dealing with these instakill or rocket spamming enemies doesn’t really play out that well in tight indoor environments. Thankfully these indoor levels don’t make up a huge chunk of the second half, and there’s definitely some cool setpieces like the Trigen VS soldier fights, or one in the beginning of chapter 18 when you’re wandering around a forest armed with nothing but a machete and an empty rifle. But while there’s moments of greatness there’s plenty of frustrating ones or underwhelming moments, like a disappointing boss fight or a terrible vehicle section. 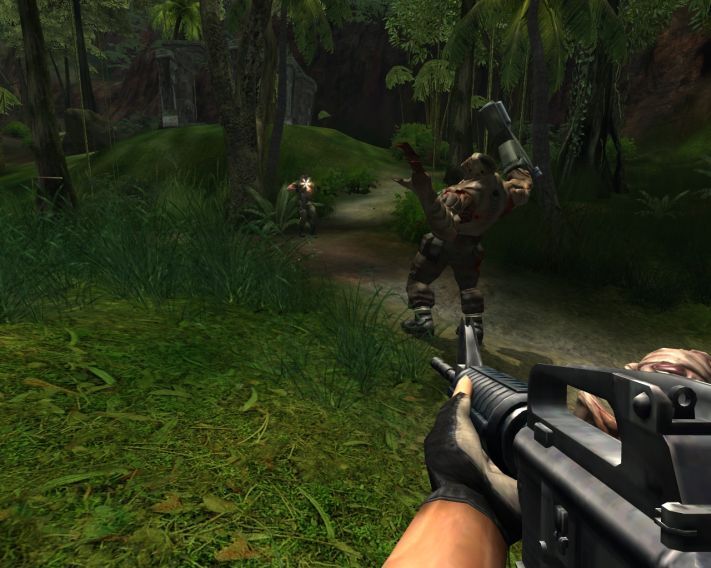 Far Cry was definitely inconsistent in terms of quality, yet there's some magic to it that kept me hooked. There’s just some sort of frantic pace to it not found in some of the later sequels that’s kind of hard to describe. It just throws so much at you that it makes for some great action scenarios when you’re barely limping away in one piece, and there’s definitely a sense of accomplishment in overcoming some encounters like the Volcano level at the end. I know for sure I’ll never forget that.

Singleplayer isn't the longest at 8-10 hours but you're certainly getting quite a bit to work with. Statistics mode unlocks once you clear the game but it doesn't add much save for a results screen at the end of each level. What keeps you coming back is the sheer amount of user made creations made over the years, from total conversion mods to gameplay over hauls. There's still a hardcore community still making content to this day, which certainly is a testament to how much some people love this game.

I'm not really one of them though, sadly. It's definitely not a game that aged poorly but I couldn't really get into it due to it's difficulty and rough nature, though that’s only to be expected as the first entry in a constantly evolving series. Mistakes were made and Crytek themselves even admitted in a 2006 article that it was rushed to compete against games like Doom 3 and Half Life 2. While I don’t necessarily love this 2004 shooter though I still respect it as a landmark title that helped paved the road for both Crytek and Ubisoft. Not anything I’d call a must play today, but it’s worth a look for hardcore shooter fans or gaming historians that experience a developer's rough start.

Images were used from the Far Cry 1 storepage on GOG.com