Ah yes, Taka-Arashi. The sumo who made his debut in Virtua Fighter 3 and the one character that put emphasis on the weight class system in 3D fighting games. It’s an interesting case that we’re talking about this character because he was the first character in the series to miss out on the sequels up until Virtua Fighter 5 R. Before we get into his explanation on why he missed out on VF4-VF5 Vanilla, here’s a backstory on the character.

Taka is a sumo-wrestler who is well-known for his brutal fighting style. In VF3, he beat up a man who was famous in the underground fighting scene while he was entertaining in the USA. He returned to Japan and notified his boss that he would be leaving the world of sumo wrestling behind. That would be the same day in which he would enter the 3rd World Fighting Tournament via invitation. 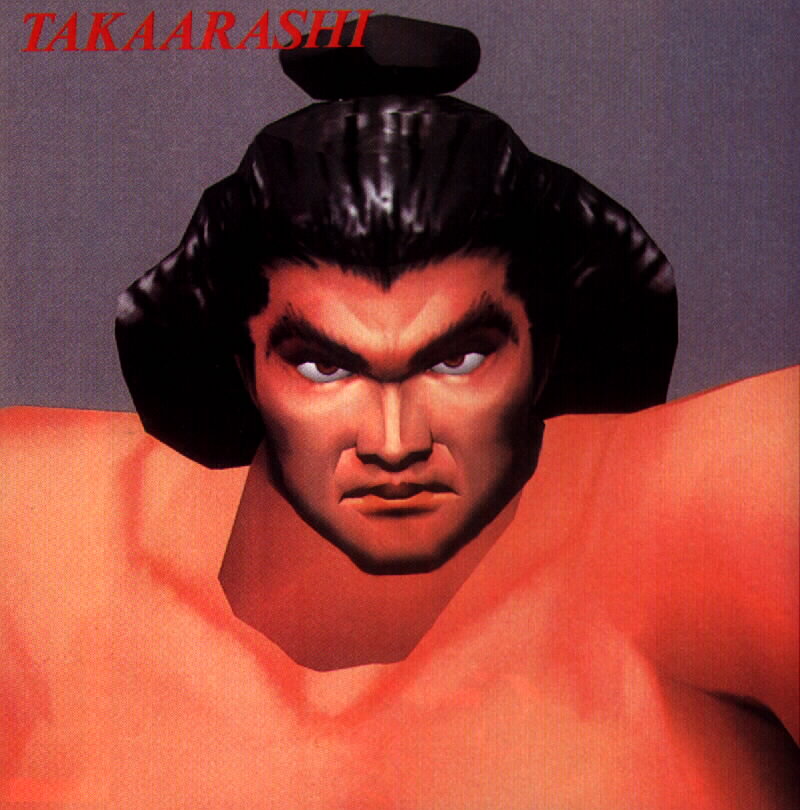 VF5R would explain his absence due to his failure in the third tournament, since Taka wasn’t familiar with the fighting styles of his opponents at the time. It sucked for him because sumo has always been a part of his life and he was an undefeated sumo-wrestler since he was a kid. His humiliating loss caused him to leave the sumo world and he lost his motivation to compete until he was saved by a sumo coach who was an ex-worker in his stable.

Thanks to the sumo coach’s encouragement, Taka’s motivation came back and his undefeated streak continued to rise in the sumo world. He made it to the finals of the sumo tournament, only to not show up at the last minute. The reason for that is because he received an invitation to enter the 5th World Fighting Tournament and decided to compete there instead. His sumo coach smiled and wished him the best.

So now that I talked about his background, let’s talk about Taka’s gameplay and why it’s different compared to the entire cast. While every character can be easily launched, Taka cannot be launched at all due to his physics. He can’t be knocked down by some moves and the character’s throws will change animation (and sometimes damage) to reflect on him being a super heavyweight character. For example, Kage’s 46P+G throw can launch his opponents high, whereas against Taka: he just flips him over.

This goes into the question everyone is wondering: Why was Taka missing during VF4, VF4 Evolution, VF4 Final Tuned, and VF5 Vanilla? The reason behind that is because he was deemed too difficult to animate during the development process of VF4, especially under a new engine that was being worked on. Another reason why he didn’t appear is because the AM2 was trying to go for fast-paced gameplay with VF4, which could have caused more problems during gameplay. By the time VF5R came out, AM2 had the technology that would support the character as a whole. SEGA did an interview with the developers at AM2 that explains their decisions.

I will say that it was clever of the AM2 to explain why Taka didn’t appear in the sequels, similar to how Siba (or Majido) didn’t make the cut due to being disqualified from the tournament due to holding a weapon. Taka has been an interesting case to explain, but he made sure that weight classes were just as important as a tier list in 3D fighting games.