So, I took a detour from my DOOM-a-thon to check out a little game called QUAKE that some of you recommended. An FPS from the minds behind DOOM in full 3D where you can actually look up? Given that DOOM 2 had pushed the game's auto-aim to its absolute limits it was the natural evolution for the team. And maybe they can learn a thing or two about level design along the way! Dangus evidently really likes QUAKE which is why it gives me great pleasure to make this announcement:

I didn't enjoy QUAKE at all. I think it's unfun and bad, and I'd happily play any of the previous DOOM games before walking anywhere in the vicinity of this three-dimensional turd ever again. It's one huge technical leap forward with a bunch of game design steps back that make QUAKE a chore and a slog, and if you all are going to recommend games to me in the future please be sure to not suck about it. Thank you very much.

Let's start with what I like about the game. The soundtrack is good. It's moody, more horror-tinged, and blasts into industrial heaviness at just the right moments. It's more spare than the previous DOOM soundtracks but more polished and interesting. I also didn't really get lost on any of these maps. They're certainly nowhere near as well-crafted as DOOM 64 with a bunch of text boxes giving you pertinent information as bandages over still pretty sloppy design, but hey progress is progress! 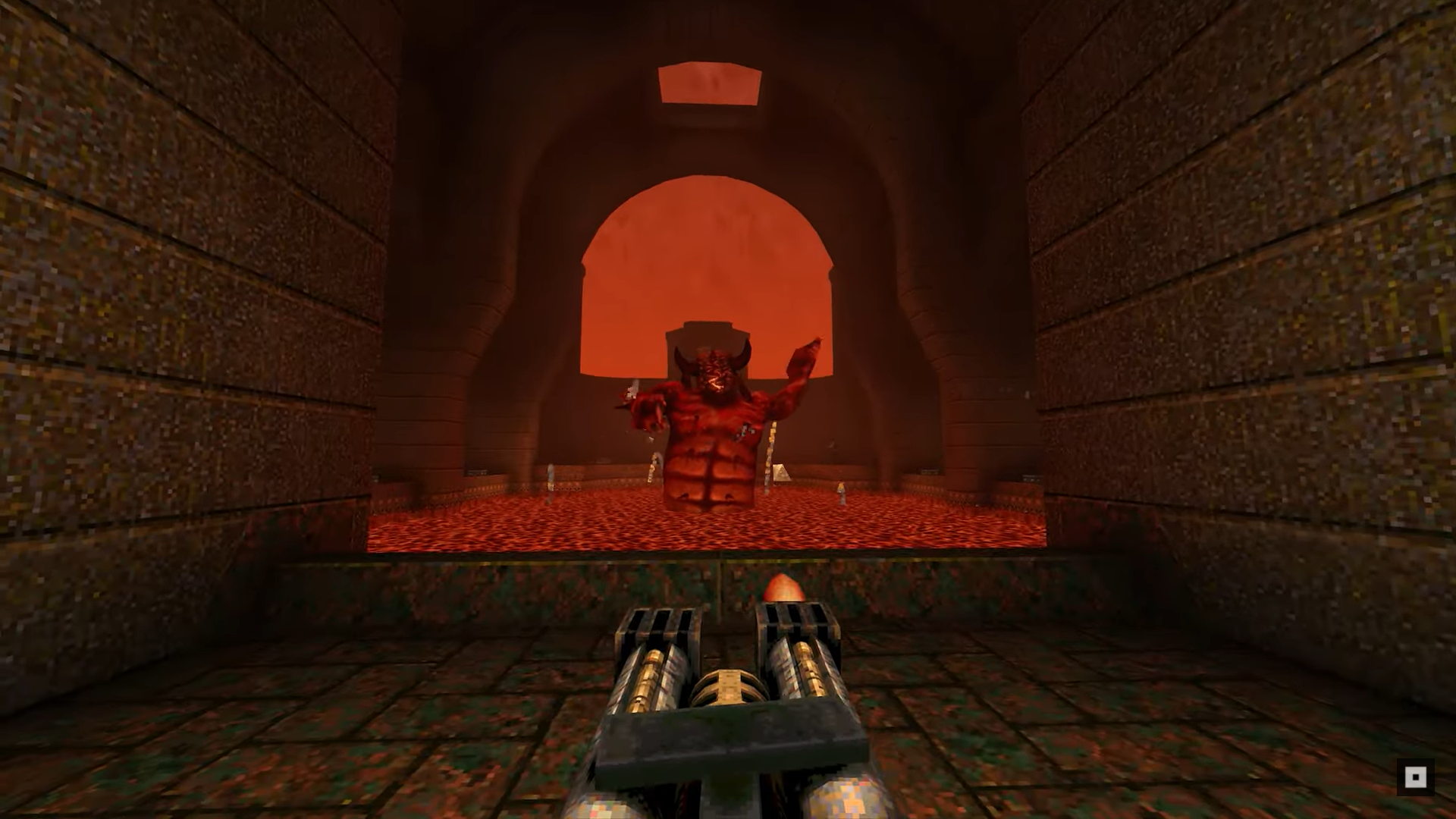 The art design sucks. You got soldiers, knights, zombies, and otherworldly abominations--and they're all rendered in a muted pallet of browns that sucks all the variety from them. Most of the monsters follow the same design philosophy of flesh-colored glob. That's it. You got a flesh-colored glob that jumps, a flesh-colored glob that flies, a flesh-colored glob that stands still, a big flesh-colored glob that shoots lightning, and not much else. The knights are vaguely more interesting, and the chainsaw dude looks okay, but they just get lost in a bland sea of clay shades. And despite the art being such a mishmash of disparent themes, the levels visually run together. They're mostly variations of castle or cavern that do little to spark the imagination. Full 3D arrived, but at what cost? You put this shit up against Duke Nukem 3D, and I'm picking the Duke on colors alone, technical leaps be damned.

Art on its own doesn't make a slog of a game, though. No, QUAKE went out of its way to forget everything that made DOOM fun from a gunplay perspective and instead crafted a plodding drag of an experience. DOOM at its best sees you rushing around, blasting enemies, switching weapons, and having a great time. One notable weapon was DOOM 2's impressive super shotgun which could blast even the most hardened enemies into gooey gibs. So, how does the same weapon hold up in QUAKE? 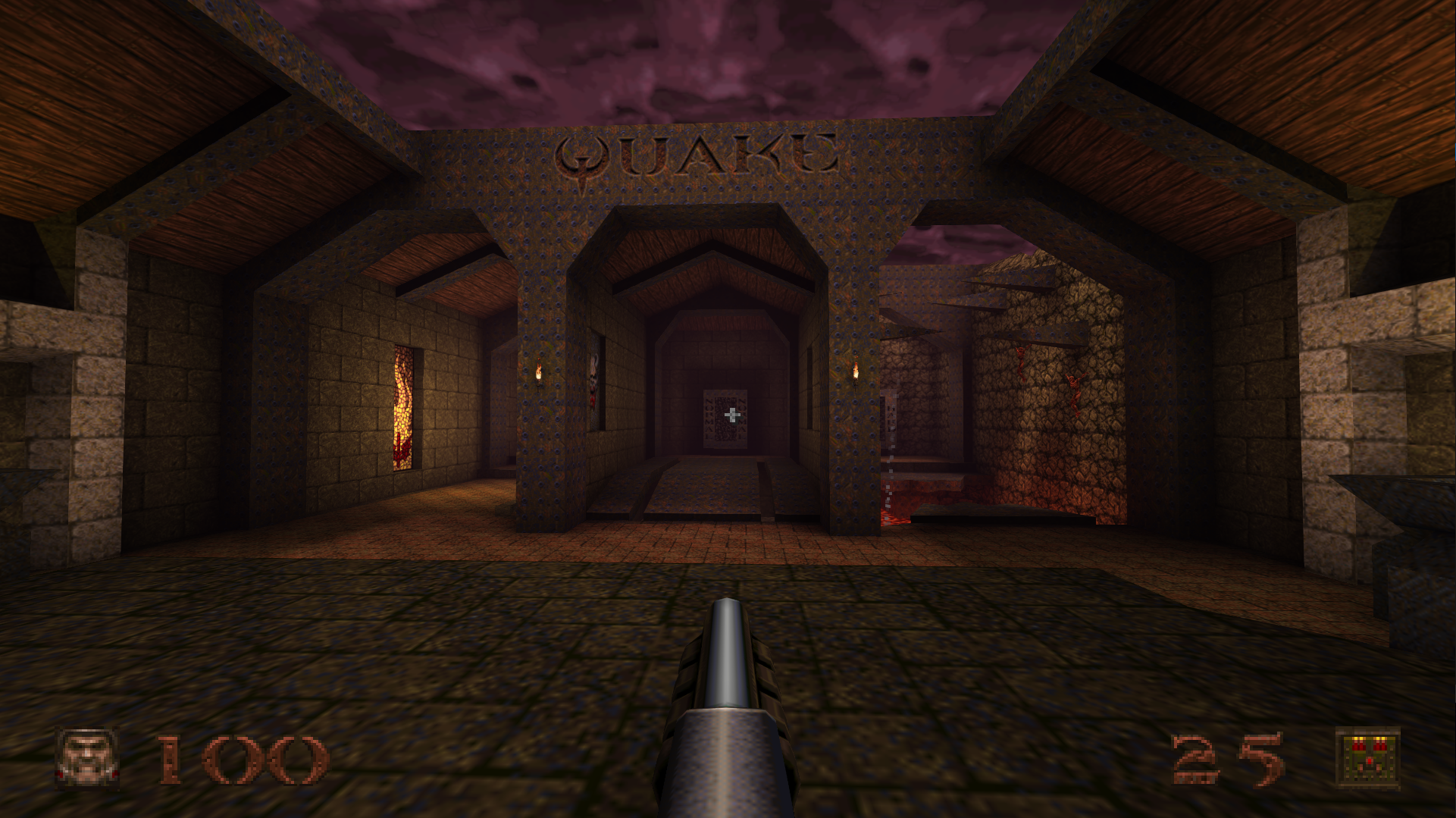 Why did they do this? They made the shotgun a terrible choice in just about any scenario. Few times will it take under four shots to kill anything, and with a gun that slow it's bound to mean you're going to take a hit or two. The nail gun is a nice weapon, but it runs through its Nine Inch Nails-branded ammo so quickly that you're bound to fall back to the crummy ol' shotgun. I have no idea why its capacity maxes out at 200 when similar weapons in DOOM could carry as much as 600. Really, the combat doesn't open up until you get the rocket launcher, and at that point there's little reason to use anything besides that and the lightning gun.

And that's my biggest problem with QUAKE. At the end of the day you have two weapons that do the job better than anything else, so you're incentivized to never use your lower-tier weapons if you can avoid it. In DOOM every weapon had a decent use. The shotgun was a great default, sure, but the machine gun helped with far away enemies, the energy rifle could make mincemeat of tougher dudes, the BFG was great against unruly hoards, and even the chainsaw could stun-lock enemies and save precious ammo. I used every weapon in DOOM's arsenal. In QUAKE I tried to avoid using most of the arsenal as much as possible. That's just no fun.

The bosses also suck. One you beat by running over switches. The other you beat by teleporting to the position of yet another flesh-colored glob, and if you're inside the boss you win. What a weird and bad idea.

So you could say QUAKE did definitely not leave me SHOOK. Now that I got that bullshit out of the way it's back into the bowels of DOOM with DOOM 3!