So, sometimes someone tells you that a game has more polygons than it really does. Sometimes, a guy tells you and his bosses that he totally didn't spend his budget on a different game. Sometimes, a developer tells you that you can play a game with your friends when actually what he means is that you can play by yourself, because he knows you have no friends, you momma's boy loser-face. Sometimes, a game developer man promises a game will make you its bitch only for you to find that you don't want to be the game's bitch, so you hang up your gimp suit in shame.

Those are lies, sure, but quit bitching, you baby, because they never brought shame to their entire nation.

Oh, do I have your attention? Does your taint tingle with anticipation? Good! Then, buckle up, bakaroo, becasue shit is getting weird. 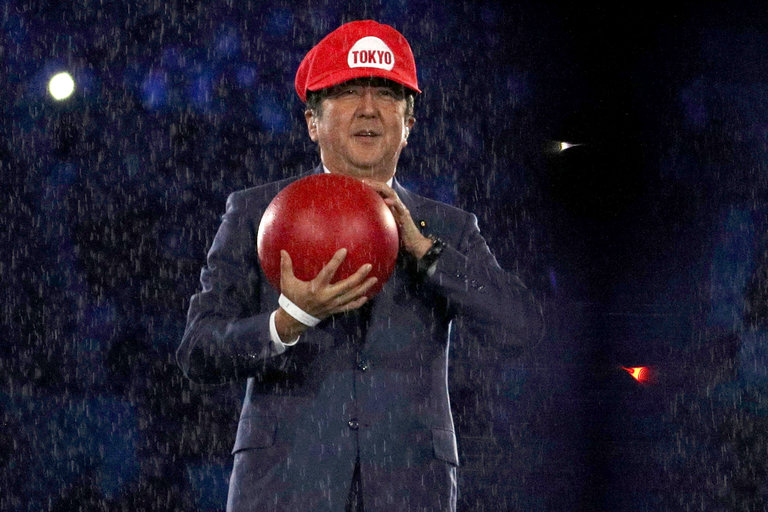 Look at this dude. You might be shocked to find out this isn't the actual Mario, but Japanese Prime Minister Shinzo Abe. He showed up at the Olympic Closing Ceremony this year to announce Tokyo as the host for the Summer Olympics in the auspicious year of 20XX. This brought me around to fantasizing about a sweaty dude dressed as Sonic the Hedgehog from the Sonic the Hedgehog video game series taking home the gold in sprinting. But this also reminded me of a time way back in 2014 when Japan, the Olympics, and dirty fucking lies were all pan-seared together into a stew of shame, the stink of which still fills the kitchen of video game history to this day.

Let me tell you a story, kids. So, sit down, take your pants off, and let's all do things that we regret.

The year was 2014, the Winter Olympics were in France, and a figure skater named Daisuke Takahashi was about to hit the ice and do something that I won't make fun of, since the dude could cut me in half with his feet. But he was supposed to do this routine to a song called Sonatina for a Violin-- Pictured: Daisuke Takahashi being very macho and masculine in front of millions of viewers.

But then CONTROVERSY! DRAMA! INTRIGUE! Something so damning was about to occure that a press conference was held.

So, what the flippity fuck happened, you might ask, because you're a Nineties Kid, and that's how we talk. Well, slow your roll, young buck. Don't worry. I'll get you there. You won't need to edge for long.

Which brings us to this particular video game, one which you could say got a bit famous for its music. A little title known as Resident Evil.

The man credited for the complete OST for the Dualshock Edition of Resident Evil was none other than Mamoru Samuragochi. This man, who had lost his hearing completely by the time he was 35, was dubbed Japan's Beethoven and reveared for his symphony to those who died in the bombings of WWII titled "Hiroshima." So, what's the big problem?

The dude's the liaringest liar to ever liar. This all started to unravel for the filthy falsehood fibber in 2013, when he started answering interview questions before the signer had finished translating for him and even almost sat up for the doorbell. This sounds like some shit out of a Will Ferrell comedy, where he'd realize his mistake halfway through standing and then make a big deal about how his ass was going numb to cover up while promising everyone that he's as deaf as a doorbell--he mean's knob! Deaf as a doorknob!

Just another tragedy of WWII.

That man was Takashi Niigaki, and he claimed that for the past eighteen years--eighteen fucking years!--he had been writing all of Samuragochi's music while taking no credit and getting very little compensation in return. So, why would he compose all of the music that this not-so-deaf musician-who-can't-play-anything claimed he was doing on his own? Well, Samuragochi basically trapped the at-the-time struggling composer. He'd call him with a job--like the one for the Resident Evil soundtrack for Capcom--give him just ten days to make it, and then take all the credit. The deal was already set in stone, and Niigaki found it impossible to say no.

And Samuragochi went on to make up lies and stories and pretend that he was deaf to escape questions about composing music. He even stole parts of Niigaki's life to use in his own autobiography. The dude was mental, and when Niigaki couldn't stand it any longer and told him the shit was off, Samuragochi handed him a letter, alegedly written by his wife, claiming that if Niigaki revealed their secret, the Samuragochis would kill themselves.

Remember when you were a kid, and your mom told you to take out the trash, and if you didn't she would bury your cat underground for ten minutes to teach you a lesson? Of course you do. But this is a whole new level of guilt trip.

But in 2014, Niigaki couldn't handle the secrets any longer, since an accomplished and virile skater would be performing to a song that he had composed and didn't want the man to skate to "a fraud."

Whew! What drama! The only way Tokyo's 20XX Olympics will reach that height will be if Mario does the shot put with Peach's decapitated head. Here's hoping! 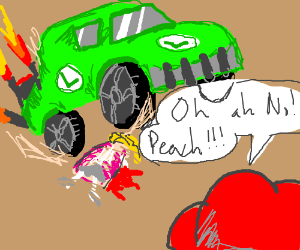 Anyway, in summation liars almost always win, but in this case one didn't, so if you're going to lie make sure either no one else knows you're a liar or that you can keep any accomplices under your thumb.