It only took them 63 attempts, but somehow the fine folks at id finally figured out how to design levels! It's crazy walking into DOOM 64 and seeing densely packed, thoughtfully laid-out designs that make traversal a sinch and exploration more fun. Does this mean I found even a quarter of the game's secrets? No. But I almost felt like I wanted to, and that's a feat of its own.

But I should step back for a second and talk about the two most obvious changes--the graphics and music. There is essentially no music in the game (or my version of DOOM 64 is fucked up). Instead, there are ambient noises that help add a layer of horror to the experience, but honestly, I was missing some of the DOOM 2 headbangers--especially since now I wouldn't have had to listen to the same song loop for twenty minutes as I searched for the right wall to hump to escape the Citadel.

The graphics were more jarring. We went from pixel sprites to these globby abominations that could only have been a product of the N64. Let me start by saying that the imp looks terrible. Second-biggest visual downgrade of the game. Everything else looks either fine or a bit scarier. Only in the case of the Screaming Skull Spitter did the devs outdo themselves. Now, it's this two-faced monstrosity that is a glorious horror to behold. I love it. 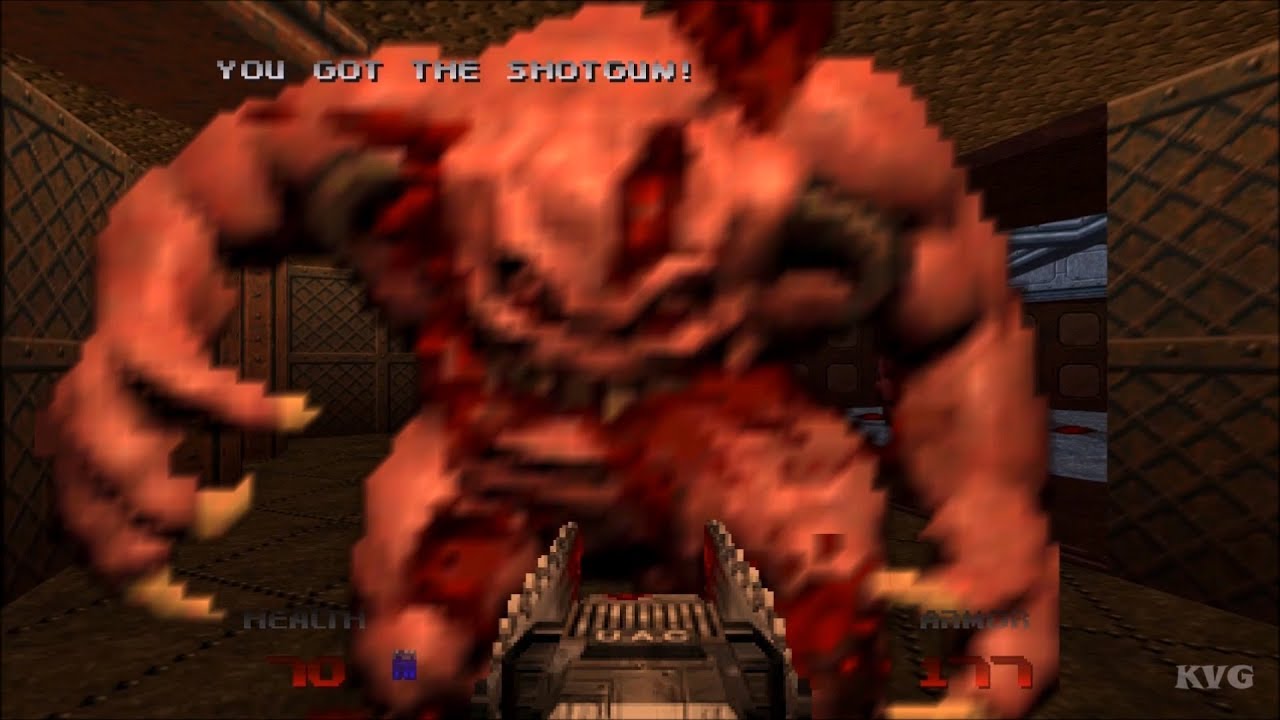 The biggest downgrade, however, is in the weapons. They just went ahead and stripped any semblance of animation out of them. Out goes the satisfying Super Shotgun reload and in comes the barrel just sort of moving a little bit. It sucks. The only gun that looks cooler is the Gatling gun. I hope whoever decided to give it a blue muzzle flash is currently running the company.

The newest weapon, the UNMAKER!!!! is fine. I used it pretty frequently, because it's faster than the usual energy rifle. Of course, it just means that the energy rifle no longer gets any use. It doesn't add anything to the arsenal so much as it exchanges.

But back to the levels! They're all so fucking good! Someone who played Mega Man joined the team because id actually learned how to organically show the player what they need to do through level design. There are two platforms that need to be lowered, but the only switches are far away. But oh, look! through this window both switches are perfectly placed and tilted so you can shoot at them. Go figure! Gone are the archaic guessing games and portal memorization of yesteryear and in are real honest-to-god puzzles with reasonable solutions! Honestly, I spent a while wandering some levels, because I just assumed there was some nonsense wall I had to grunt against to find some hidden switch I needed to open a room across the map--but that was my fault! Almost all the means to open doors are in the same general area, and so many levels have central hub zones that each path wraps back toward that even if you are searching for whatever door a switch opened you're bound to find it fast. 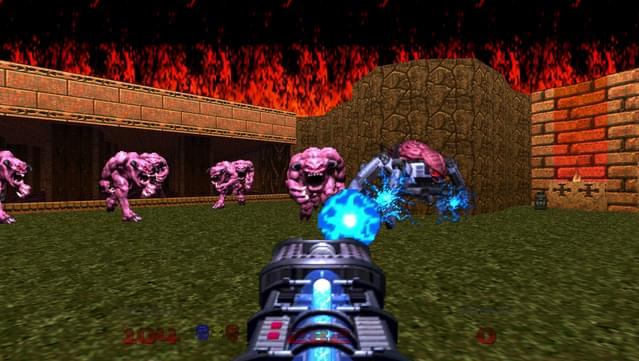 I was getting so pissed in a level where there were two locked gates with symbols for the red, blue, and yellow keys next to them. I had all three keys. I found a room where I could hit three switches showing those symbols. Sometimes, it seemed a minotaur spawned for no reason, and another time a single gate dropped. I ran around bitching myself up for almost ten minutes until I realized that the combination of the red, yellow, and blue symbols beside each gate was the combination you had to plug into switches in order to open each gate and plugging in a combo that didn't match anything spawned the enemy. It was some simple logic-based reasoning and sign-posting that I simply didn't expect from a DOOM game. Amazing!

Even enemy placement is leagues better in DOOM 64. There were no points where I regretted not being able to look up. The auto-aim always did as needed and made shooting smooth, fast, and fun. It's just good, man.

My only gripe is that I wished switches that could be shot had a different texture from ones that couldn't, but it was rarely a problem. 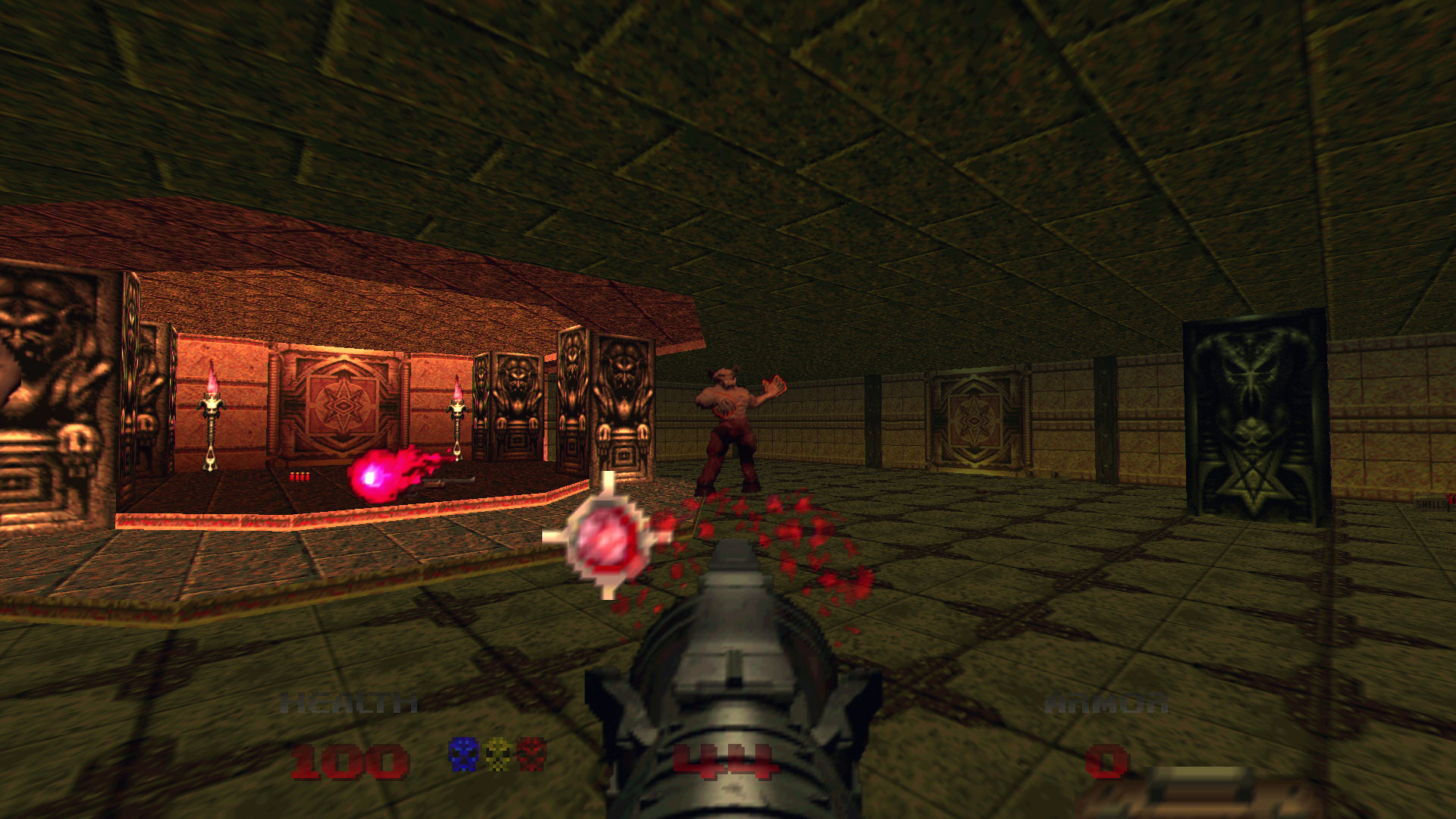 The last boss, though, does suck. I didn't find any of those special keys you need to I guess make the fight easier. The only way to beat it in that case is to position yourself behind a wall, so the rockets it shoots at you explode against it, and then you edge yourself out just enough to see the boss. Then, don't move a muscle except your trigger finger and fire away until dead. It's not fun. Maybe someday id will learn how to design a boss.

Overall, DOOM 64 rules, and it's the only one I'm very likely to go back and play again.