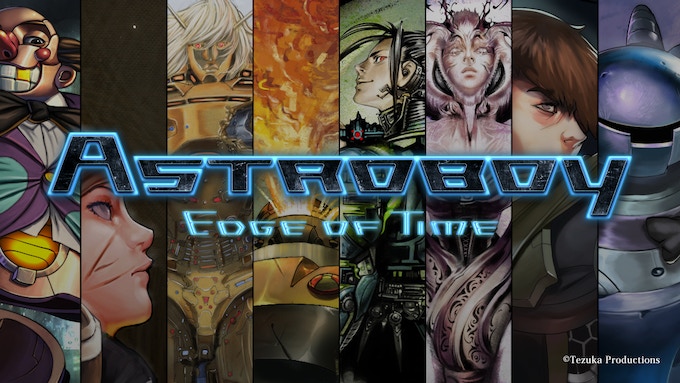 During the course of the week of before August 21, many had their eye on a teaser website for a game called 'Astro Boy: Edge of Time'. While only brief glimpses could be caught, visitors could clearly see Astro Boy and other familiar characters in the art style of their creator, Osamu Tezuka. Several big names were teased to be a part, and many hoped that we were getting another game like Omega Factor, which featured many of Tezuka's works crossing over.

Then August 21 came along, and we learned that the game would be a digital collectible card game, as well as a radical shift in art style would be happening. In addition, it wasn't a guarantee either, as the game was fully revealed via a new kickstarter campaign. In the initial campaign and announcement video, Astro Boy himself was nowhere to be seen. For many, including myself, this was a major turn off, as the original art style was what gave many of these characters the charm and personality that people fell in love with, much like Wind Waker for example. In addition, there is no shortage of digital CCGs on the market, with Hearthstone, Magic, and Pokemon all having digital versions and Elder Scrolls: Legends and Gwent soon to be released as well. Along with numerous smaller ones such as Deckstorm, this means the game itself would have stiff competition. 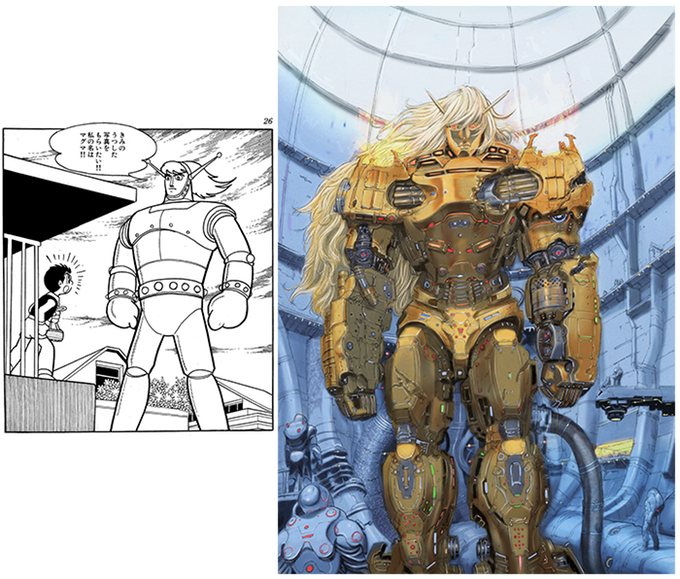 However, the team made the right move and also released a free demo, in order to show off more of the art assets as well as let players experience the core systems at play. I gave it a whirl, because it wouldn't hurt to see what they had planned. It also wouldn't hurt to give the art more time to shine, to see if it would grow on me.

The demo itself is very minimal. There are no settings for it in any manner, not even an option to go between windowed and full screen modes. It opens up with a screen focusing on Magma, prompting you to click. Once you do, his eyes light up red, and the screen fades to black ominously. Personally, I hope that's not a sign that Magma may go evil or rogue during the story mode that will be in the final product. You'll then be taken to a menu containing four deck options. Each deck belongs to a different in game faction, more on that later, and each one follows a certain archetype, such as rushing the opponent with low damage, cheap units or controlling the board. All decks have a description and a difficulty rating, which also helps the player find a good starting point to ease them into the mechanics.

One thing that the demo does, and that I am really fond of, is that there is only one AI opponent with only one deck. As a result, after a few rounds, it allows the player to focus more on the mechanics of the game and the flow of each decks, rather than having to worry about what the AI is using. Some may see that as a drawback due to eventually being able to predict the AI; however it is only a simple demo. For someone like myself who hates trying to learn a deck archetype while a different deck gets used by the opponent every time, it's perfect.

Update: Turns out the AI does rotate through multiple decks, the same ones the player can choose from. It appears that for the demo, or at least my copy, seems to be heavily favoring giving the AI the Gearworks Revolution deck for one reason or another. A bit of a bummer, but at least it only rotates through 4 decks that you will eventually come to know. 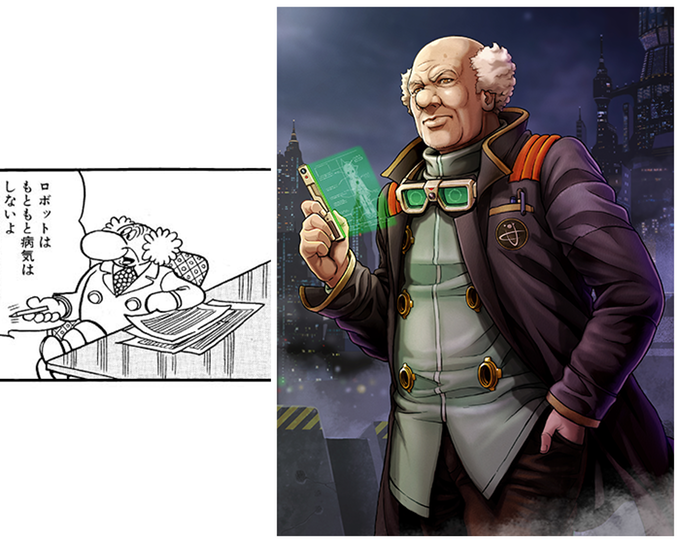 A match starts with both players being dealt an initial hand of 4 cards. Players can choose to discard and replace any number of the 4 cards once. Decks contain a total of 30 cards. Afterwards, the match starts. The first player to be reduced from 25 health points to 0 is the loser. Decks are also not unlimited, but it is not clear what the consequence/punishment of having no cards left to draw is. The game also doesn't mention this, but there appears to be a maximum hand size of roughly 10 cards. It's very rare to encounter that however. The only time I encountered it was due to pulling a total of seven cards in a single turn.

All cards need a set amount of a resource called 'quantum' to be played, which could be compared to land in Magic the gathering. Unlike Magic however, players start with one quantum at the start of the match, and gain one additional quantum each turn, eventually reaching the maximum of ten quantum. Personally, I like this approach, as it removes the classic problem of not pulling needed resources as the game goes on, effectively reducing the RNG factor in winning and losing.

There are two types of cards: Units and Gear. Units act as your standard monsters in other card games, acting as your main means of offense and defense. Units can have additional common effects, or unique ones that fall under Construct (takes place when unit is summoned), Shatter (takes place when unit is destroyed), and Strategem (more on that momentarily). Gear on the other hand are one time use cards that are used for permanent buffs to units, draw cards, deal damage to enemy units/players etc.

When a player goes to summon a unit, they have to choose one of two rows: either in the Enforcer row, or the Guardian row. If a unit is placed in the Enforcer row, they are able to attack. If they are placed in the Guardian row, then they act as a line of defense, preventing the opponent from directly attacking you, as well as able to active Strategem abilities if they have them, one time activation abilities. Some units have abilities that will only trigger if placed in either row. Units cannot move between rows without the appropriate abilities or gear cards. However, a unit cannot attack or defend the turn it is summoned unless it has an ability that says otherwise.

Note the 'ZZZ'. They indicate a unit that was just summoned and can't take any actions.

Combat also has an interesting difference from Magic. When two units engage, damage is dealt simultaneously to each other. However, if a unit survives combat, the damage it sustained will carry over to subsequent rounds. As a result, there is no near impenetrable defence, as players can continue to throw unit after unit, gear after gear, at a specific target until it's gone. An unstoppable offense doesn't exist as well, as Guardians will slowly chip away at it every time they block the attack.

There's also an additional mechanic I didn't play with during my time, which was faction cards. Each of the four factions has a unique card that can be obtained during a match at any time. What the player must do is click on their faction icon, choose a card from their hand to discard, and then they will receive the card. At no point during my time did I feel safe using this due to not knowing what the cards were and still getting a hang of the core game itself.

During my time, I played with the decks for two of the four factions. 9 Kings Syndicate and Gearwork Revolution. The 9 Kings deck was focused on rush down. It possessed units that could get out quickly, increased damage by meeting criteria, that punished the opponent with additional effects when damaged, gear cards focused on clearing units from the field, gears to switch what row a unit is in, and even units with effects that dealt damage to the opposing player for drawing cards. It was alright, but generally the rush down archetype isn't really my jam so there may be some bias and inexperience in general at hand here. 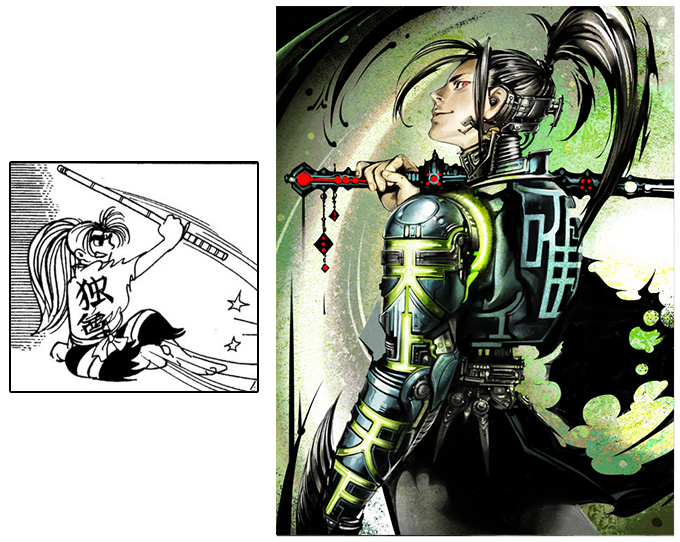 Meanwhile, Gearwork Revolution had a different approach. Its robot filled deck was focused on getting robots out, especially powerful ones, and buffing them. There were cards that reduced the quantum cost of playing robots, buffed all units currently in a row by +2/+2, could spawn more robots under certain conditions, were buffed by the number of robots in play at the time. It was quite frankly a scary deck once I figured out how it flowed. Blue Knight is a part of this deck for those curious, and is a scary late game one. It's also the deck the AI runs from what I can tell. I really liked this deck, playing the majority of my games with it.

Matches flow fairly fast, due to no resource starvation, quick animations, and a rather fast AI. The only time I ever had a problem with the AI was when it initiated a board wipe and it was stuck processing its next move afterwards. As in, stuck to the point where I had to shut the game down. Which was fine, as the game would have been worn next turn by me via gear cards. I'd say matches took roughly 10-20 minutes, mainly due to me still getting the hang of things, and one of the Gearwork mirror matches turning into robot spawn hell on both sides. All matches were closely matched as well, with both of us usually in the single digit ran of health.

The music during the demo was quite pleasant, being sort of an electronic pop/funk I think? Don't ask me to identify genres, I'm horrible at it. I liked them and that's what mattered. There were at least three tracks in the demo, and it actively looped through them during matches. This resulted in a more upbeat feel which helped break up the monotone that's plagued me when trying other digital card games. According to the kickstarter, the music is already funded and done, and outside of the title theme, is being done by Akira Yamaoka, the man responsible for the music in the Silent Hill series and now the head composer and sound designer at Grasshopper Manufacture.

In the end I thought it was a solid little demo. Was it mind-blowing? Not at all. Would I have preferred the artwork to be more in line with Osamu Tezuka's? Absolutely. However, I enjoyed my time with it, and I wouldn't mind giving my time and money to the finished game if it's anything like the demo. I feel that what they have there has the potential to be very solid, and I'm considering backing it myself. Which is a surprise even to myself since I'm not too big on card games. If you would like to download the demo and find out more about the game, such as the planned story mode, the music, along with the artists involved with the artwork such as Suda 51, then head over to their kickstarter page.