The Gift of Gaming: A Happy Ending

WARNING: There are spoilers ahead for Persona 4. You have been warned.

Our story begins in the summer of 2012, a terrible period for myself. Having just failed a semester of engineering at university, and the second one in two years, I returned to my parents home for the summer, planning out a plan for the future. What seemed like a bad start would only go downill from there.

Over the course of that summer, a dumptrucks worth of bad luck would slowly be unloaded, causing myself to spiral into a state of depression and misery. The money I had in the bank at that time slowly began to dry up, causing my job search to become more desperate with each passing day, leading to many a sleepless night. While I did everything I could in my job search, no lead was unused, I gave a resume and cover letter to every location in town for any job and position, I did not hear back from a  single employer, even those I had worked for before, one of the worst things that can ever happen in a job search, demotivating myself and my causing me to think less of myself.

In late May/early June, the decision was made, by myself and my parents, to stop going to the university and try something else, a local college, becuase it clearly wasn't working out for one reason or another. This may not have seemed like anything, except one of the hardest parts of this was getting over the fact that I'd most likely never see anyone that I made friends with from there again(and I actually haven't to this day), as well as the only 'friend' I had from high school. The only time I ever heard from the people I lived with was when they learnt I wasn't coming back and were worried about the rent. Nice guys, I know. Just like that, I'd gone to being a loser, a momma's boy, a stereotypical nerd.

In late June, the bad luck train continued, in an unexpected way. A bat got into the house at some point, and proceeded to bite me. It was unknown how and when it had gotten in. During the process of dealing with it, it's skull was cracked open. For those that don't know, if the skull is opened up, it contaminates the brain, making a rabies test impossible. Meaning not only did I have to wait in emergency to get rabies shots(a painful process), but over the course of the next two weeks, I'd have to travel to the hospital for additional shots. On top of that, because no one knew when the bat got in, and rabies tests couldn't be performed on the bat, no one knew if our two dogs had been bitten, and if they had, if there was a risk of rabies or not. This resulted in a quarantine of a month for the dogs. This meant no groomers, no pet hotel(fancy way of saying kennel), no walks, nothing. Those dogs were stuck on our property with leashes and if we had company, they had to be put away and no where near them. It also meant the family vacation had to be cancelled.

This scared the daylights out of me and I felt horrid. One of our two dogs was just a puppy we'd gotten at the start of the summer, and had been the sole object in my life at that time giving me any positivity and hope. I'd been the only one home that day when the bite occured. Had I not been a fucking idiot with music blasting in my ears to the point where I couldn't hear my own thoughts, I could've noticed the bat sooner, perhaps even when it got in, I could've made sure the dogs were safe, I could've dealt with it sooner, prevented that quarantine from happening, possibly been able to prevent myself from being bit. But no, I had to go do something that I had been warned repeatedly would backfire on me one day. And as a result, I ended up cooped up with the dogs, responsible for watching them while my parents were at work and my sister was at camp, unable to do anything.

And it all could've been avoided had I just listened.

Then August came along. Other minor things had occured along the way, my former landlord angry I was terminating the lease and threatening legal action, learning that my wisdom teeth would have to be removed, finding out we burnt through my savings for school(different account) and I'd have to get a loan from the bank.

At this point, I was not in a great state of mind. I basically retreated to my room, only ever coming out to play with the puppy, when no one was around, and for having meals, putting on a facade to hide what was truly going on inside. I began to think of everything as unfair, bullshit, stupid, worthless. I saw no reason to continue with this. The world was useless. It didn't care for me, and I no longer cared for it. The thought of ending it all crossed my mind a couple of times but was never acted upon.

And then Persona 4 entered my life.

At first, I just watched the animation. Afterall, I didn't have the funds to actually get the game nor a system with it. It was one of the most upbeat things I'd seen from a game in a long time. But most importantly, it's main cast, supporting characters, and its themes were what did it.

First off, and this must be said, Yukiko is best waifu. That is all.

Now back to my point. As I watched, the cast grew on me. Their individual quirks, the way they joked with each other, their individual interests. I found myself able to relate to each and every single character in some way shape or form, something I hadn't been able to do for a very long time.

But there was one thing all characters had that I could certainly relate to. Issues. Every single one of them had issues, problems they kept bubbled up inside, that they didn't share with anyone else, just like I was at the time. Yu being afraid of being alone, Kanji's fear of rejection, Yukiko feeling like she was trapped in a cage due to being expected to inherit the inn, etc. These very issues came back to bite them in the butt in the form of their shadows, because they wouldn't accept that was a part of them, that they wouldn't acknowledge it.

However, I didn't fully realize this at that time. I was in cosntant denial over this fact and refused to acknowledge it. It was only when the plot progressed, when the killer was revealed, when he showed his true side. That was when the wake up call happened.

"The world is full of shit."

If there was any part of Persona 4 that was a wake up call for me, it was Adachi. While I did relate with the cast to some degree, Adachi was the character I related to the most at the time. And not just pre-reveal Adachi, I'm talking post reveal Adachi. The one that felt the world was full of shit, that could care less if everything disappeared, the one that was 'a child throwing a tantrum', the one who thought no one else knew that he'd been through, the one that had been a two sided liar, the one who backstabbed the man who thought he was his friend, the one that was ready to shoot himself when it all failed.

And deep down, it scared me. The entire reveal, I found myself agreeing with almost everything he said, before realizing what the hell was happening after the dust settled. Much like Adachi, my sitatution had partly been brought on by the world yes, but it had also been brought on by myself. I willingly chose to basically sever my ties with my family and the rest of my friends. I chose to keep all my issues all tucked away, allowing them to boil up to this point. I threw a tantrum and blamed the world instead of assuming control of my situation to the best of my ability. Some who, a gifted and social person, allowed himself to become a former shadow of that.

I let it sink in, understanding everything I had done that summer, understanding how wrong I'd been in my actions. Understanding how the team and Adachi differed in that the team confronted their issues and accepted them, working towards improving themsleves instead of letting them consume them, and passing the blame onto others like Adachi did. Realizing that I didn't want to become someone like Adachi, I wanted to be someone like the team. Someone who accepted their issues, regardless of what they were, and faced them head on, instead of running away or blaming others for them.

And that meant accepting the truth.

The next day, I left my room early, asking my dad if I could speak with him. This surprised him as not only was it unusual for me to leave the room for that reason, but we also had not had a 1 to 1 talk since the start of the summer during the ride back from the school.

For the entirety of the talk, I told him the truth. How I felt about my actions, what was going through my head, about the future. Everything.  He looked at me, nodded his head, and thanked me. He had been worried about me the whole summer and was actually about to approach me that day. This was the first step to repairing our replationship, and over the course of the next several months, returned to what it formally was, along with my relationship with the rest of my family.

The week after, we went on the postponed trip across the border. While we were there, we stopped by a Gamestop, and found a deal on used vitas(after the overall pricedrop mind you). My father surprised me and bought a Vita for me along with Golden. My mother told me later it was his way of expressing his gratitude for me opening up about my problems to him.

The summer ended on the happy note of Golden and a new school, new program, new people. As of today, I am still enrolled in that program and currently going to pass my third semester, I have a consistent job that works with my schedule and is relevant to my field, new friends, a healthy relationship with my family, and a more positive outlook on life. Everything has only gone up since I realized my problems and acknowledged them.

Almost everything about my current situation I owe to Persona 4 and it's cast, especially Adachi. I honestly don't know if I'd be who I am now without that wake up call. It was easily the single greatest thing gaming could've given me. Thank you. 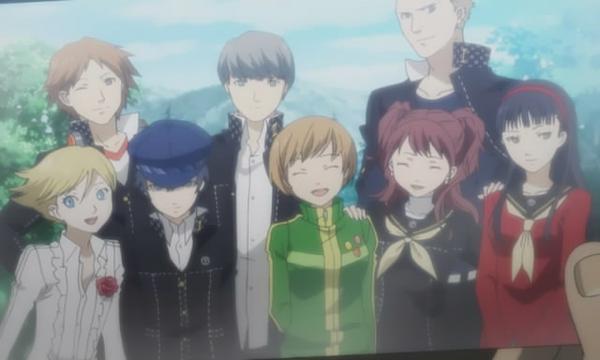 Now that I've gotten that out of the way...

Edit: Modifying the top image because it was super blurry.