Killing Time: Too Much Time 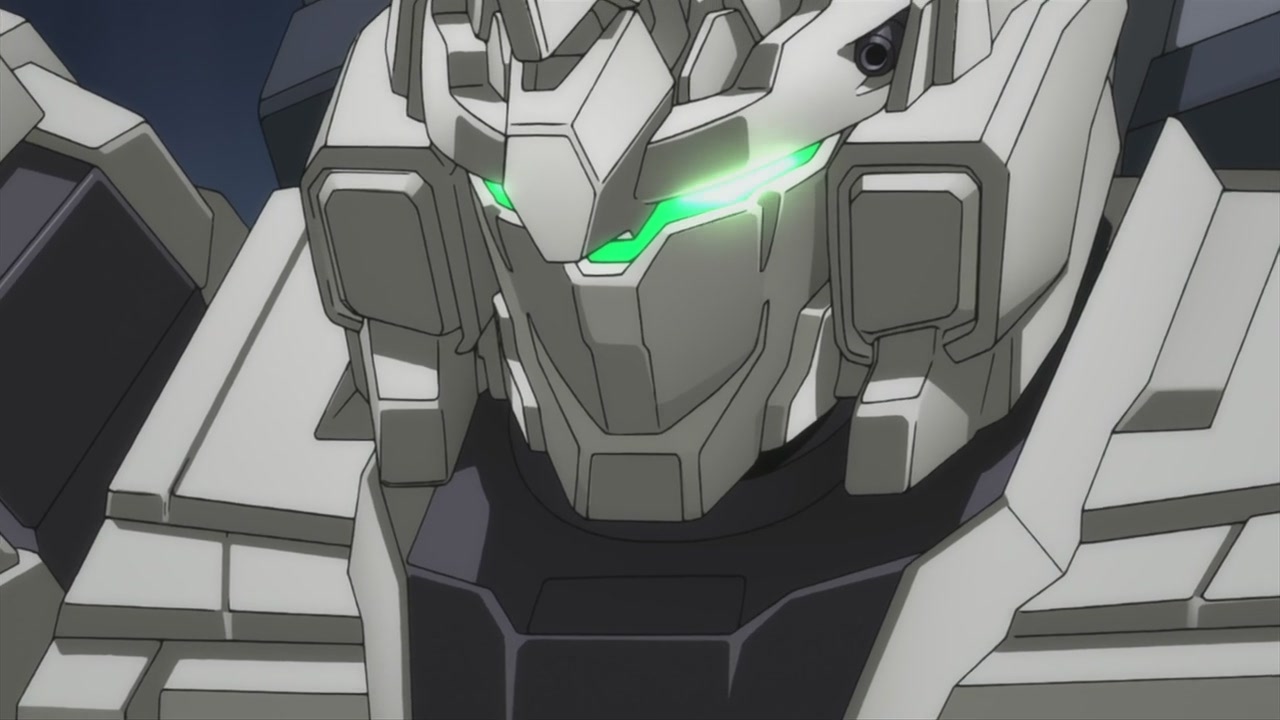 So as those of you that may have seen in the community discord or quick posts, I'm an unemployed man. I went to work temporarily for the government, couldn't get anything lined up before then. It's a weird moment in my life, not in a bad way by any means. I've completed college, meaning for the first time in my life I'm going into a September where I have no schooling to look forward to or deal with. I live with the folks since it results in less financial stress since I'm very carefully balancing out my savings and poking away at the big old student debt that can only shrink from here on. Of course, a man can only put out so many resumes in a day without burning out and feeling like he's going nowhere, which leaves a lot of free time. So what does Torch do with all that time?

Right now I'm plugging through two games I've just purchased, and most likely my last full price purchases for this year until I'm employed once again. Those two games are Super Robot Wars OG: The Moon Dwellers and Gundam Breaker 3. Both of them were lucky enough to receive English releases in Asia, and while I was heavily anticipating Moon Dwellers, I had just recently gotten into Gundam and others that had played it heavily recommended Breaker 3, so I ordered it when I preordered Moon Dwellers. So far I'm heavily enjoying the two, and I'm actually really enjoying Gundam Breaker 3 a lot more than I was expecting. I'm not sure why, but something about it just connects with me in a way a game hasn't for a long time. I just completed it this week, and immediately jumped into the new difficulty that was unlocked. I'll definitely be going after the Platinum trophy, as well as playing with the customization options, which can churn out some pretty cool stuff. Like a Gundam that looks like Goku! 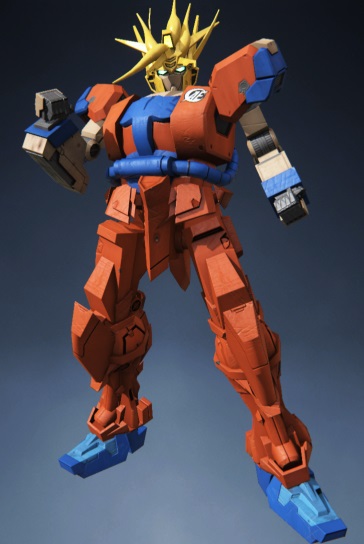 Give him the appropriate skills and he can glow like a saiyan too.

After I'm done with those two, I'll most likely start picking titles out of the backlog and finishing them up. That's the great thing about having a backlog in my opinion. If you ever end up with free time, with nothing coming out you want or you can afford, then you have that to fall on and keep you busy. My backlog is probably pretty small compared to many on the site, but it still has a couple of big ones in there. Xenoblade Chronicles X, Yakuza 5, Persona Q, Valkyria Chronicles Remastered, Shin Megami Tensei IV, Twilight Princess HD, Super Robot Wars Z3: Tengoku-Hen, Final Fantasy X-2 and more. My consoles, both portable and home, have no shortage in games to work through still, and that's not even including the steam backlog of at least 50 games, nor any new games via Playstation Plus. I have no reason to go out and buy new games, I have enough to play through already.

I'm also not really the type of guy to replay games. There are very few games in my library that actually have been replayed for one reason or another, with the exception of the Wii and Gamecube libraries which were replayed while I was at University as roommates had never seen them before and were experiencing them for the first time. I generally find it boring, as often times my memory of the game comes back and I lose interest or find it easy. At the moment, I'm taking the time every so often to replay Megaman Starforce 3. I'm finding everything about it to be about what I recall from when I first played it, but god damn it feels easy and it drains the entertainment out as a result. It might be because Starforce 2 and 3 were some of the first games I've played to 100% and then some. As in, I had played enough that the games started to lose their challenge, and I was going after postgame bosses with basically the equipment set from the start of the game and nothing more. Yeah, that's why I don't really replay games often, especially those I've played to or near 100%.

When I'm not playing through games however, for one reason or another, I'm doing other things to pass the time. Mainly because, while I love video games, they become boring real fast if that's all you do in your free time, as I've experienced at several points in my life. As of late, one of those things has been watching anime. Beginning with G Gundam, I began to marathon the Gundam series, partly due to interest from seeing various entries in Super Robot Wars. After G Gundam, I began to focus on the  shows in the Universal Century timeline in order, building up to a rewatch of Gundam Unicorn, the first Gundam series I watched. Currently I've just wrapped up Zeta, and I'm quite surprised at the jump in quality from the original Mobile Suit Gundam. It also strikes a really nice balance of politics, action and character development that I'm enjoying more than I thought I would. However, the final episodes and conclusion of it just tore my heart apart, harder than anything else has before. There were clear signs in hindsight it would end that way, but it still hurts. I'm also having those moments where, as I watch the series, something in Unicorn comes to mind and clicks into place, slowly getting me excited for the rewatch, much like watching other mech shows brings to mind moments of Gurren Lagann with the realization that Gurren was paying homage to that. Being an older show, it also has its fair share of jokes floating around the net, including the infamous 'I came here to laugh at you'. However, my personal favorite has to be the one below, mainly because Jerid, the archrival to the protagonist, has been nothing but a prick to Kamille and a monster in general, and it feels so right as a result. 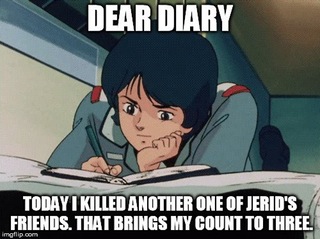 I will admit I am a bit hesitant to move into ZZ, the next entry in the UC timeline. My viewing plan was to watch that, then the various OVA's before, during, and after the events of the original, Zeta, and ZZ, then watch Char's Counter Attack, and then finally Unicorn. However, with Zeta, I'm feeling a bit burnt out by the amount of lore, characterization and world building that Zeta and the original have done. Zeta's ending, along with how I've felt as of late, have left me in a bit of a downer mood, and I'd rather a pick me up anime than more of a serious one at the moment. I'm thinking of putting a hold on the UC timeline and instead watching Turn A Gundam before resuming. I've been informed it's a more light-hearted show, and it was produced by Tomino, the director and creator of Gundam, at a time where he was creating more lighthearted shows such as King Gainer, so I'm hoping it'll be a nice pick me up, much like Persona 4's anime was. If you want an idea of how lighthearted King Gainer was at times, here's a gif some of you will be very familiar with.

Outside of that, I kill time with blogs about games here on Destructoid, just like this one. Sometimes I start shitstorms, sometimes I have nice little ones. I like to think that I throw out a decent variety in what my blogs talk about. I also have three blogs I have in mind and/or in progress at the moment. One is a review of Gundam Breaker 3, while the other 2 are a midway impressions of Moon Dwellers, and eventually a review of it. Hence why I didn't go into too much detail for them, otherwise this blog would bloat into like 4000+ words. I will admit that, while writing and working on these in my current employment status, I wish I could get paid for them. Yes, it may seem selfish, maybe even greedy, but even if I was paid like $50, or whatever the bare minimum is, for just the reviews I'd be happy. I'd like to think it's not too far of a stretch given that some western sites reviewed Dead or Alive Xtreme 3, but Gundam Breaker 3 is far past its English release date, and I have no idea how to go about proposing that to sites that would be interested. It does seem selfish, but when you have no income, the thoughts of what you could do for a bit of money do creep through your mind at times. I also had an idea for a fourth blog that's more community based, however it's very reliant on Gundam Breaker 3, and I'm not quite in the position in game to say what I plan to do quite yet, despite having beaten it. However, I will give a hint, and it has to do with the Goku picture.

The only thing I have left really to kill time with is my gunpla. Back in July, I ordered a gunpla, essentially a model kit, of Gundam Unicorn in its 'Awakened' state. While a normal Gundam wouldn't be so bad, Unicorn has quite a bit going on with it in terms of design due to a transformation. It also doesn't help that it has a ton of weaponry since it was the full armor version. For reference, even just an arm required 30 different parts. I managed to get through its upper body and waist, not including weaponry, backpack,etc, before stopping, due to not being home long enough to focus on it during August as well as feeling down and a little unmotivated as of late. I'm slowly feeling the drive come back to finish it however. It sits there on my desk staring at me, waiting to be finished, to have the little bumps and stubs ironed out for a more finished look. Perhaps I'll finally have the drive to complete it as the marathon goes on, I can feel it coming back. 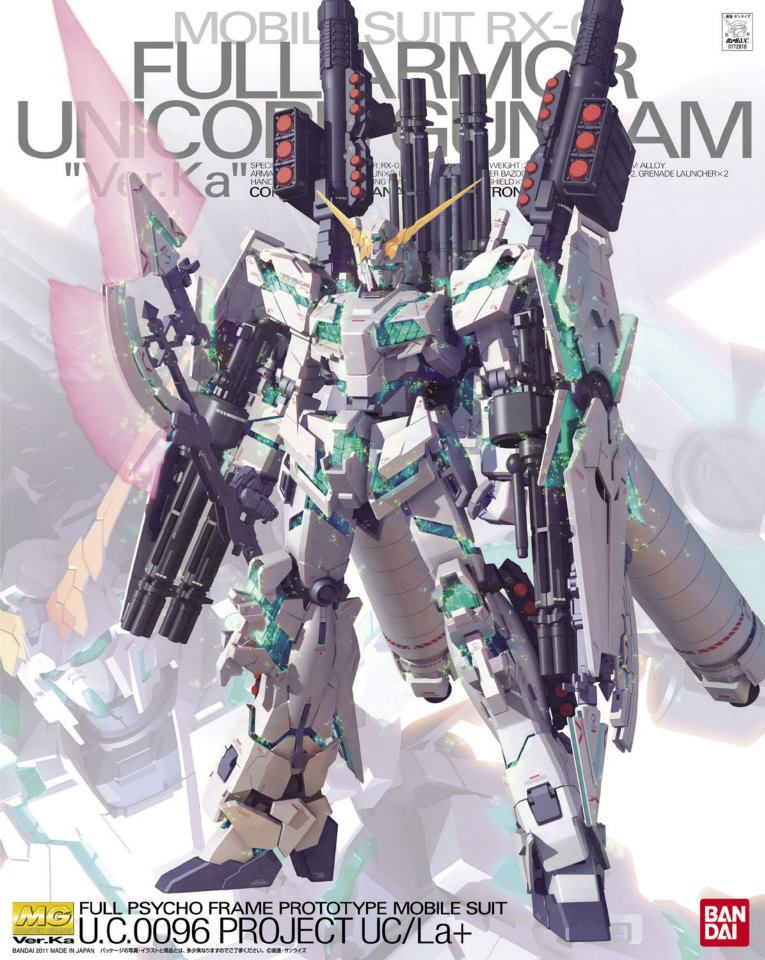 I wish I didn't have so much free time, but that's the hand I've been dealt. It's not like I'm sitting here doing nothing about it either. I have been putting resumes out, to jobs in my field as well smaller full time and part time jobs, in order to get my name out there and secure some type of income. I've also started looking into getting the A+ certification which is an industry standard maintained by the Computing Technology Industry Association, as well as ones in networking and security. The more attractive I am to employers, the more likely I'll hear back from them after all. I'm sure something will come my way eventually and I can move forward in my life. Until then, I'll just have to pass the time with my video games until then, and anime on the side as well. This also includes the blogging I can do thanks to Destructoid. Thanks for taking the time to listen to me go on about my personal life and what I do in my free time, as well as getting some things off of my chest as well!