So I've made yet more Destructoid cards

It's been forever since I made Destructoid-themed Magic the Gathering cards! Since I've been in a trading-card game mood lately with my review of Fable Fortune and Magic the Gathering Unstable drafts, I figured I'd give this a go again and give cards to community people who haven't received some in the past. This time around, I went with enchantments since the previous two blogs featured planeswalkers and creatures. As always, feel free to make your own if you have Magic Set Editor installed. It's very easy to learn and use, and you can just download the first set of cards I made as a tutorial of sorts.

As a quick recap, first Magic the Gathering has 6 colors of mana, each with different playstyles: blue, red, green, white and black... And colorless! Colorless enchantments are the worst idea, however, so I'll stick to the five basic colors of Magic.

Since by now you're all Magic the Gathering masters, I have an announcement to make: The following set of five cards is rather terribly designed, for three main reasons. I want you guys to try to guess what's so bad about them before reaching the end of this blog.

Roses are red, Anthonies are blue 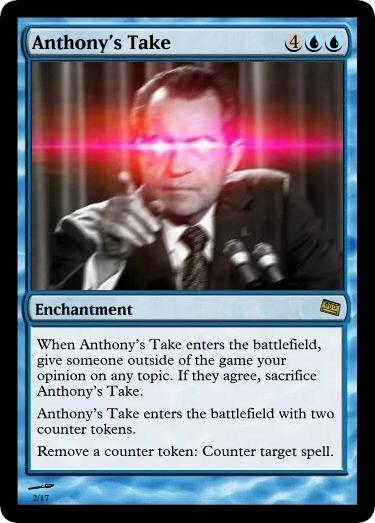 Ah, Anthony. Weeb in denial, and now blue-player in denial. When I made this card, I really wanted his terrible takes to be a main focus of the card. In order to play the card, you must fail to convince people that, for example, Inception was a terrible movie. Due to peer pressure, it's very difficult to come up with opinions people will outright disagree with... I'm kind of curious to hear the strategy you guys would use to play this card.

To compensate for the high probability of the card doing nothing, I made the effect pretty darn strong. Being able to counter a spell is really strong, and this is a really, really strong way to counter a spell. Normally, canceling an opponent's spell is valued at three mana and a card... Here, you get counters at the cost of three mana and half a card. Beyond that, counters can get countered themselves, while your opponent cannot react to the counters on Anthony's Take if the card is already on the battlefield. It's good countering yo. Anthony is a good blue boy. 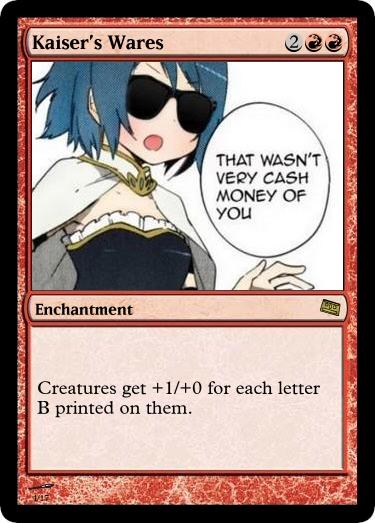 Anyone remember this classic moment? 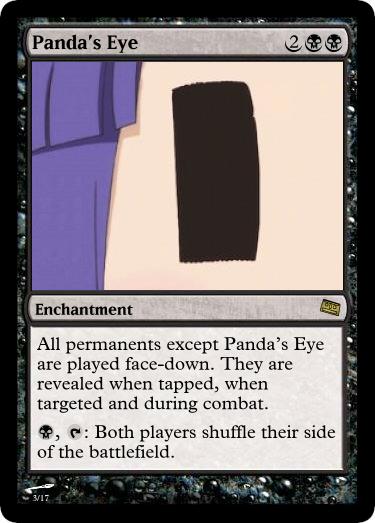 Panda is very shy and basically appears at the worst possible times so I can basically never talk to her... So I made a card about hiding stuff! I think it's pretty flavorful and also people will either love or hate it when you play this card.

Vxxy is not only a birthday boy but also a good vibes boy. He's always showering me with hugs and hearts. In private messages, in my mail, under the sheets. 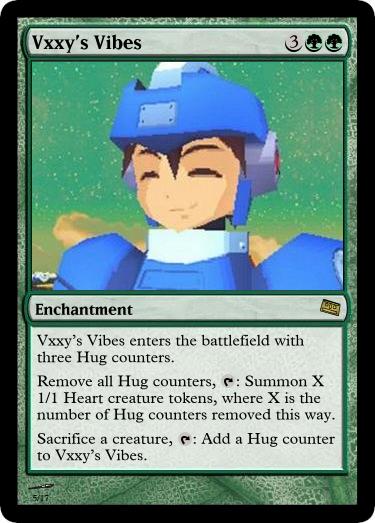 Well, sometimes he's also a bully, and that's also featured in this card. He can unleash his hugs to give him an army of hearts, and he can take them back at any moment to unleash them later on. It's an environmentally-friendly, recyclable card. 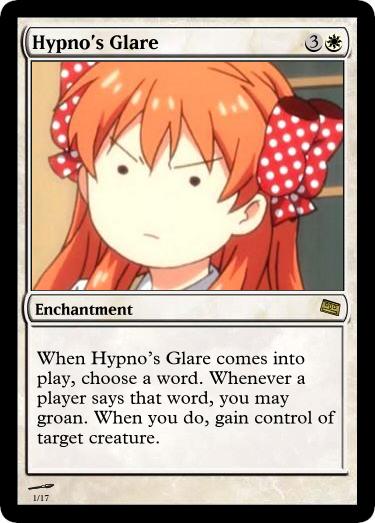 I made this card to celebrate Hypno's cop status. No fun allowed when the pigs are around!

Well, this wasn't so bad, right? I do think I did a pretty good job at giving the cards abilities that matched the community members.

But, like I said, they're terribly designed Magic the Gathering cards. Mistakes are even better for learning than miracles, so let's take a look at why this shit doesn't fly, alright?

These issues target certain cards in particular, not all of them. Kaiser's Wares is definitely red, the color of aggressivity. Anthony's Take is definitely blue, the color of mischief and control. Panda's Eye sort of gets a pass... While black likes revealing cards from your opponent's hand which is the opposite of what's going on here, the card does fit a decay/obscurity flavor.

Vxxy's Vibes really feels like a white card more than a green card. White loves playing cheap, weak creatures that overwhelm the enemy. But sacrificing a creature is a black mana thing... If Vxxy's Vibes gave +1/+1 counters equal to the number of Hug counters, then that part would feel like a green card... But then if you don't sacrifice the creatures you summon with the card, you're definitely in black mana territory. So the card feels like it could have been either white/black or green/black, instead of just green. But I decided to make these cards mono-colored, and I was going to stick to it.

Hypno's Glare is a total mistake, color-wise. Mind control cards are typically blue, because they're mischievous and, you know, control... They can also be red, typically if it's a case of temporary mind control. It just fits in a theme of quickly dealing damage to the opponent, you know. In any case, Hypno's Glare is definitely not a white card... It's just that blue and red are already taken by the two cards that obviously fit their colors in this set.

There are many card types in magic. Lands are typically how you'll pay for spells. Creatures attack and defend. Instants and spells do something and then go to the graveyard. Enchantments and artifacts are pretty similar, in that they're like instants and spells that stick around, but their philosophies are pretty different. Artifacts are these sacred items that you use to do something, so they typically have an element of interaction with them. Enchantments, on the other hand, are meant to be modifications to the game state. They're like weather effects in Pokémon. Once they're there, you shouldn't interact with them.

As such, Kaiser's Wares and Hypno's Glare are fine enchantments. Anthony's Take, Vxxy's Vibes and Panda's Eye, on the other hand, require interaction from the player. You remove tokens from one, you tap others. That's not what an enchantment does. They should be artifacts, but I made these a bunch of enchantments instead. As such, the difference between card types is confusing to the player... it's important to keep the role of card types clear to a player. Plus, mixing things together like this totally lacks flavor. But hey, I wanted to make sets of 5 cards of the same type with these blogs.

3) Panda's Eye is confusing in many ways

Panda's Eye is a mess. But it's a funny mess, and it references a fun photo.

I hope these Destructoid cards have made you smile, or at least think a bit about card design! See you in uh... Rayman 4.