I'll be honest, I've been stumped for a while trying to come up with a fitting theme for this Destructoid Draws. So far, the Encore series has been trying to mirror the original one. Dream Crossovers was the tock to Favorite Franchises' tick. Favorite Sidekicks naturally followed from Favorite Villains. And, uh... we did Guilty Gear twice. As a treat.

But this time around, I did not know how to follow up the fourth ever Destructoid Draws: OC Mega Man Robot Masters. That one was something special. We were able to let our inner kids loose -- and it resulted in a ton of great designs like Net Man, Soda Man, and Ocean Man. Where do you go from here? Was there anything that could give us the same mix of creative freedom and thematic consistency?

Well, Cactooze came up to the rescue, suggesting Shin Megami Tensei for this installment. It clicked instantly. SMT is already a fascinating mix of characters from across humanity's myths and stories as is.

So without further ado, let's get into what members of the community came up with! 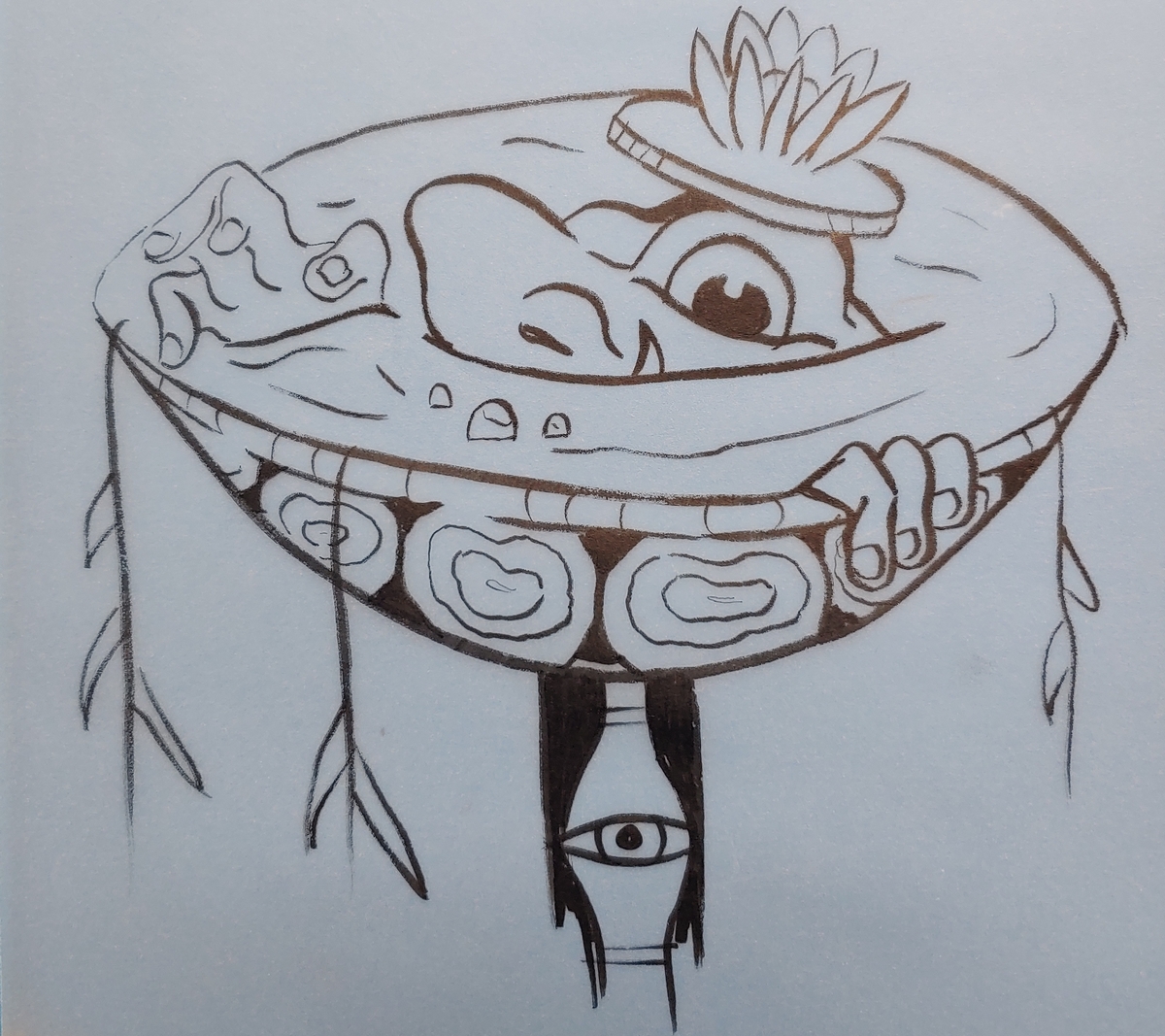 The Vodyanoy is sort of like a Slavic Kappa, so I mixed them a bit. It drowns people for fun... pretty fucking metal. It would have access to the Bufu tree because there are no water skills in this series. Let's also give it a gun since that's a thing too in these games!

(Editor's Note: This is another reason why Persona 2 is the objectively superior Persona, it has the Aqua line) 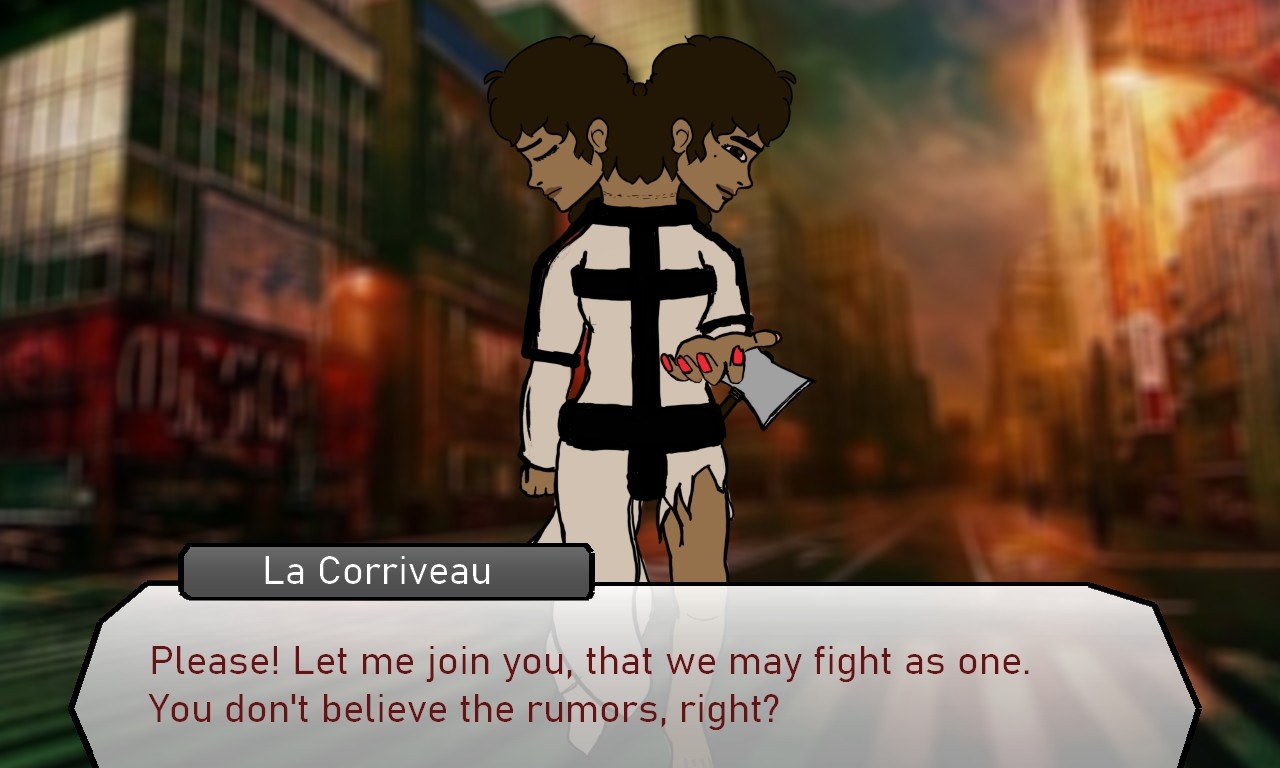 Be careful of the Corriveau's wiles, lest you end up as another dead husband in the pile. Or, so the legend says. A popular character in Québecois stories, the only clear-cut fact of Marie-Josephte Corriveau's life is that her husband was found dead shortly after New France fell under English rule. The death was first found to be an accident, then investigated as murder with the Corriveau's father found guilty. Just before his execution, however, he confessed to being an accomplice to his daughter. In the end, she was executed and put on public display, while he got off without a sentence...

This public display after the execution was striking, leading to a distortion of her story. Mentions of the Corriveau in tales and songs often mention as many as seven husbands murdered in cold blood, a number sure to bring chills to children and adults alike.

It would be interesting to represent her duality as an SMT character. She's after all a potential victim, of the treatment of her husband, of the accusations against her if she was innocent, and the twisted way her story has been twisted posthumously. But as far as SMT goes, she'd have to be representing the impression she left on the collective unconscious. She'd probably be an early-to-mid game demon using Marin Karin to charm party members along with some beefy physical attacks. 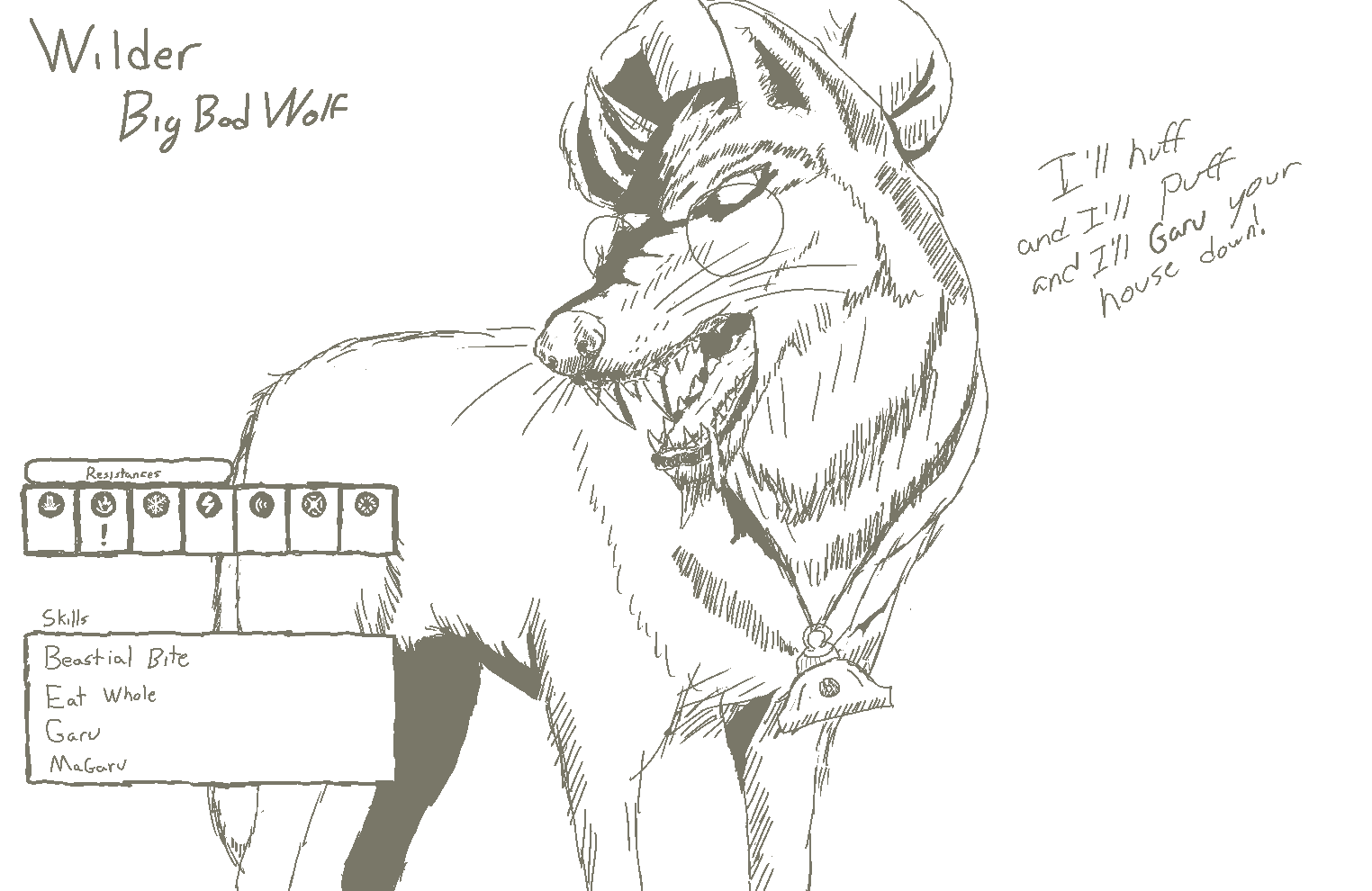 I tried to incorporate elements of each of the stories this wolf has appeared in into the design. He has wind attacks and is weak to fire. He wears Little Red Hood's grandma's glasses and bonnet, and a shepherd's whistle from that boy who cried wolf.

I'd imagine he'd be an early game demon (likely the lowest level Wilder, and early game Garu/Zan user). Their interactions could be like: "Why do you smell like a human?" - Because I ate one - "Yeah they taste good, hard to keep in your stomach though!"

The Grim Reaper is reimagined as a bratty skater kid. I have been drawing variations of this guy on my notebook in high school back in the day when I was trying to make metal album covers for the band I never formed with my friends. 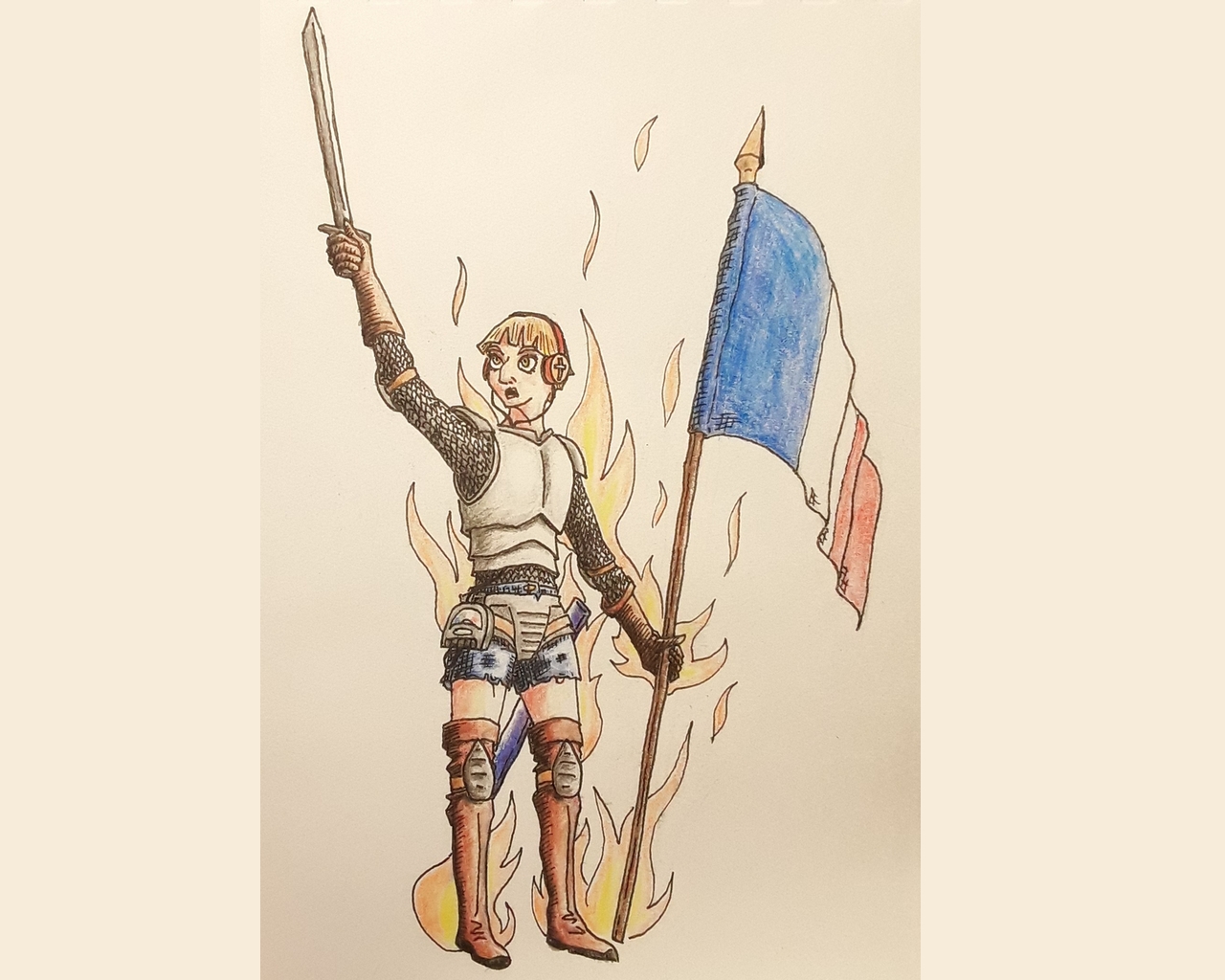 Jeanne d'Arc's a figure of French history, a young maiden who led an army against English invaders after hearing a message from God. She was later sold out and burnt at the stake, before getting canonized as a saint by the Catholic Church.

I see her as leading a mostly human army for a Law faction. She would probably be an early mandatory mid-boss/boss. While fighting she would be joined by several Archangels/Powers who would protect her by taking damage instead of her while she buffs them. She would also occasionally attack with Light magic. Even though I drew her surrounded by flames she is actually weak to Fire (it would feel so wrong to not get a press turn when casting Agilao on Jeanne) and Dark while being immune to Light and Ailments.

The design is inspired by the song Bigmouth Strikes Again by The Smiths. I found the idea of her with some headphones rather funny. The cross on them suggests that they may be the origin of the message she heard. 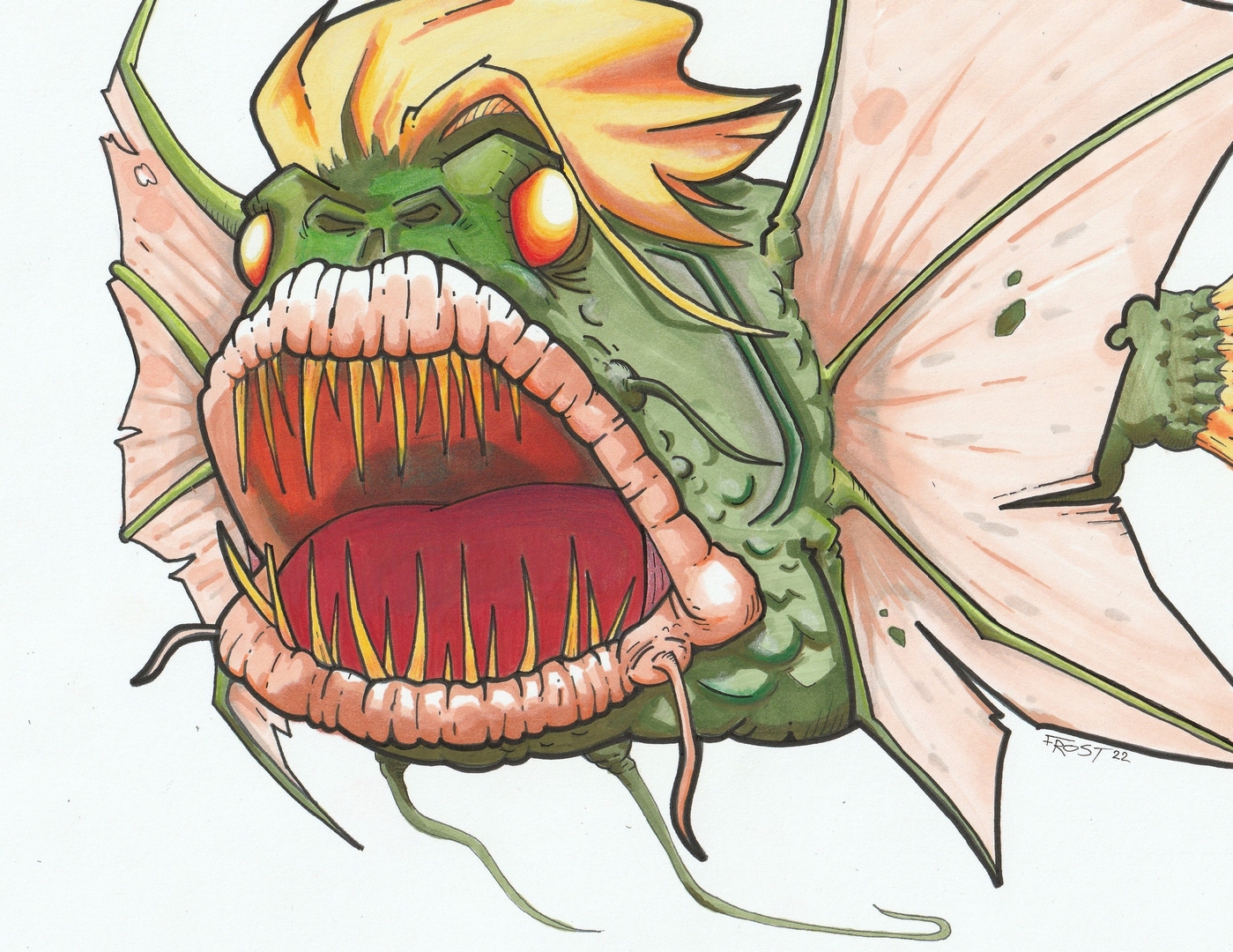 The Mazomba is a giant fish in the mythology of the Chaga people of Tanzania. I don't much about it, and it's hard to find much about it either online, so I'll just make its description up.

It is a neutral deity only taking action when its life or home is threatened. The people of Tanzania worship Mazomba for its beautiful blond hair and its near-encyclopedic knowledge of weeb shit and Magic cards.

(Editor's Note: I can't help but shape this feeling... Like there's an imposter among us.)

Whew! Things got a bit weird there at the end, but I hope you've enjoyed this edition of Destructoid Draws. Maybe you even learned a thing or two this time around? As always, if you have an idea of a mythological figure that would fit well with Shin Megami Tensei, please feel free to participate in the comment section!

Hungry for more Destructoid Draws? Check out the previous installments: