Castlevania: LoS - A Close Look at a Flawed Gem

9:19 AM on 07.07.2013 (server time)    0
I recently finished Castlevania: Lords of Shadow. It was a very interesting game, and I found it gave me a lot to talk about. While this could be taken as a review, I'm approaching this more as an in depth critique, covering everything I think is worth mentioning, both good and bad, in much depth.

Let me start this by saying that I am not a Castlevania fan. My experience with the series is limited, although I still have respect for it. The only traditional Castlevania game I have played is Symphony of the Night, and as of yet I haven't really been able to get hooked on it. I am, however, a big fan of technical action games, so that is the perspective I'm approaching this game from.

Although I've had interest in Lords of Shadow since its release, I didn't actually buy the game myself until relatively recently. Although it somewhat spoiled the first game for me, seeing the E3 trailer for Lords of Shadow 2 is what spurred me to finally dive in to this one. I have been pretty impressed with what I have found, but the game is by no means perfect. It has some rather big problems, but a lot of great positives too. 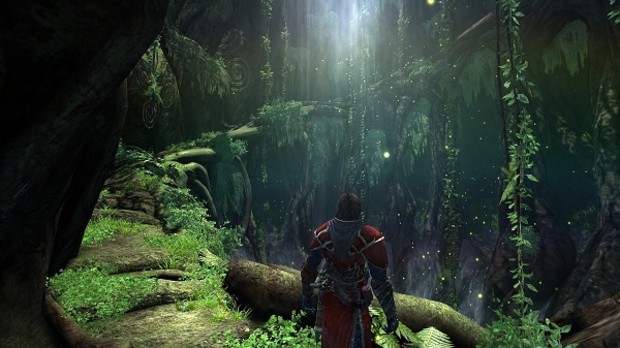 There's some lush foliage too.


And as I mentioned before, some of the bosses have some interesting stories to them. In particular, the Lords themselves. While saying anything more would be too spoilery, I have to say that they are some really interesting characters, and how they came to be is a cool story and one of the many exciting twists of the narrative. And talking of twists, the ending is fantastic. I thought that seeing the trailer for the sequel would have totally spoiled it for me. I was wrong. Although there were some vague clues through the game, I was genuinely surprised by the reveal at the end. It was very well handled. It also included some of the best moments for Gabriel himself.

Overall I really enjoyed the game. There were some frustrating parts, and aspects of the story could be much improved, but the game got it right where it counted. It also created a beautiful and intriguing world that I'm eager to jump back in to. Lords of Shadow is a prime example of a flawed gem.
Login to vote this up!