When I was a wee lad, a buddy of mine had a portable Pac-Man machine that bore a surprisingly close resemblance to the original arcade version. Released by the late, great Coleco, the gizmo used vacuum fluorescent display (VFD) technology—an early precursor to the LED—to provide a crude but playable approximation of its arcade big brother. I was fascinated by this little facsimile, but in retrospect, it was the relatively faithful reproduction of Pac-Man’s arcade artwork that was truly impressive. How awesome would it be to have the entire line of Coleco’s mini cabs adorning a shelf or some center showcase? It’d be a miniature home arcade that anyone could afford to own! 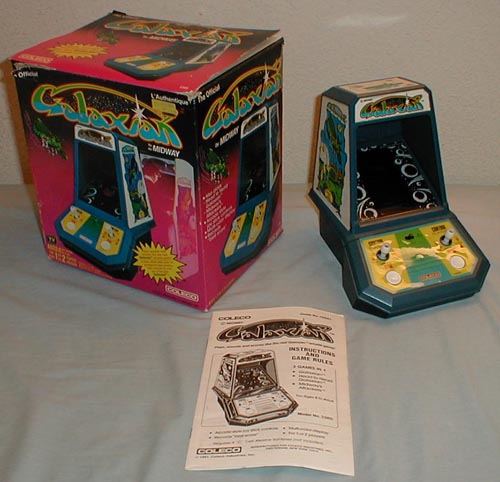 Well, I never did get my own Pac-Man portable, nor any other for that matter. But years later, around the turn of the century, I began thinking about that tiny replica again. It was so cool! Why hadn’t another company come around to do the same thing in recent times, releasing similar replicas now built around the magic of modern technology? Well, jump ahead another fifteen years or so, and my wish finally came true. Walking through my local Wal-Mart one evening, I found one corner of the toy department crowded with something I hadn’t seen in eons—rows of squat, five-inch arcade cabinets bearing the likeness of Centipede, Q*bert, and a bevy of other classics. Even better, their displays now utilized true LCD tech that played actual ROMs (albeit of sometimes indeterminate origin). It was like someone had finally heard my prayer! 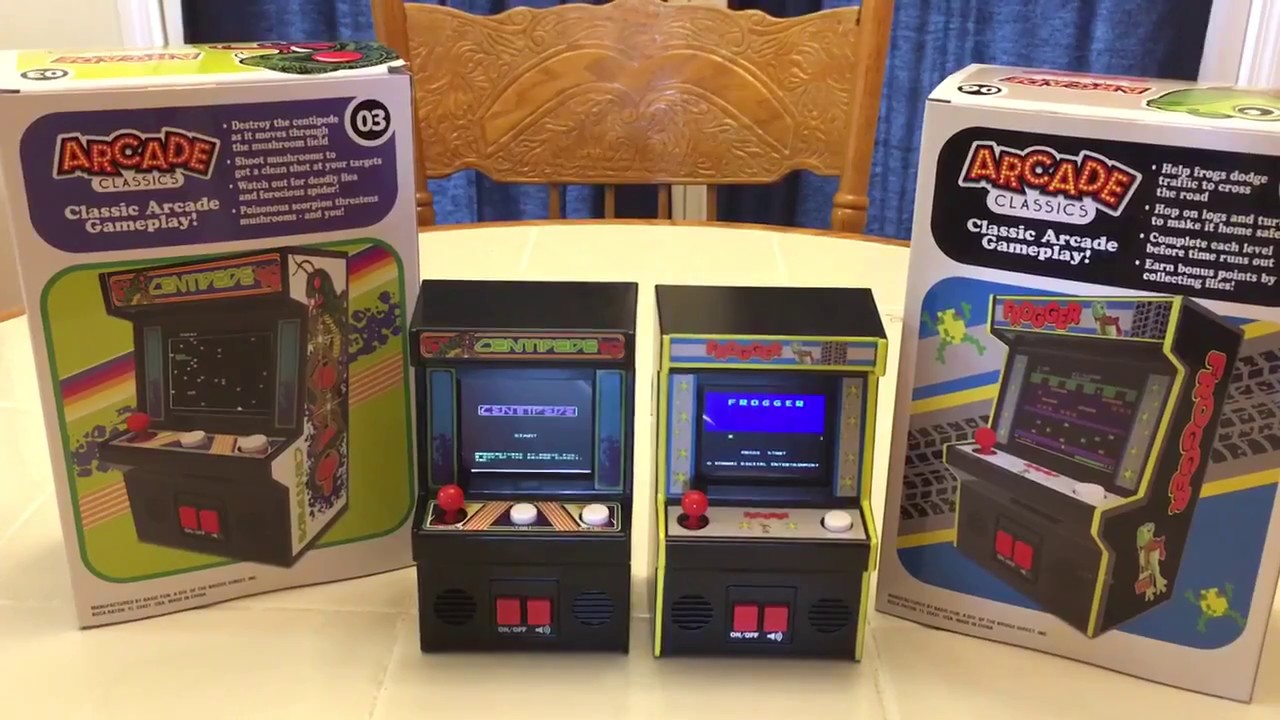 Except, it was more than one answering angel. Indeed, a legion of other companies have now entered the market with their own arcade miniatures of one kind or another. Arcade1UP specializes in ¾ scale machines than come closest to matching the full-blown experience of the real deal. On the opposite end, Super Impulse is sprinkling retailers with its Tiny Arcade line, which comprises teeny, Christmas Tree ornament-sized baubles that can barely be played given their puny dimensions--but at least they look neat and cost pennies by comparison. My Arcade sells slightly superior, snazzier versions of Basic Fun’s machines. New Wave Toys’ Replicade series tries to simulate the original arcade experience as precisely as possible, but within a 1/6 scale design. And Numskull, deeming those original arcade cabinets of yesteryear to be works of art, is doubling down on the aesthetic element, recreating ¼ scale wooden cabinets that, in theory, should be nigh indistinguishable from their grown-up counterparts (dimensions aside).

Thus, enter Galaxian: Numskull’s latest in what some might call its "Namco Vintage Collection"; Pac-Man, Galaga, and Ms. Pac-Man “Quarter Arcades” have already seen release by the British-based company, with each machine receiving fair to positive reviews from the enthusiast collective at large. In truth, I’m still waiting for my Ms. Pac-Man to arrive, but in the meantime, I’ve decided to briefly evaluate the Galaxian cab that came adorning my doormat during the Christmas break. Enjoy the following splurge of pictures! 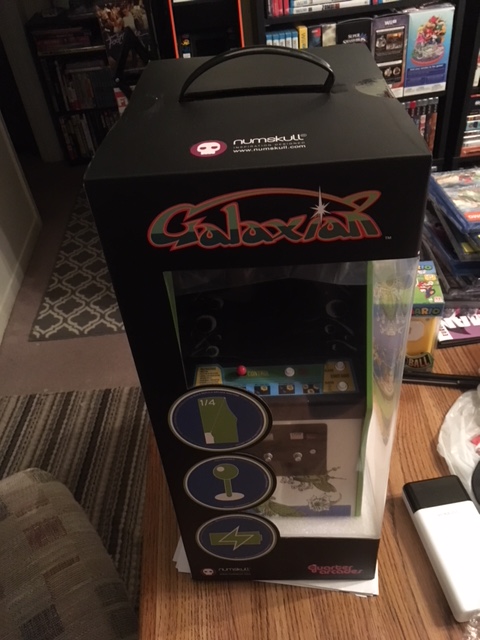 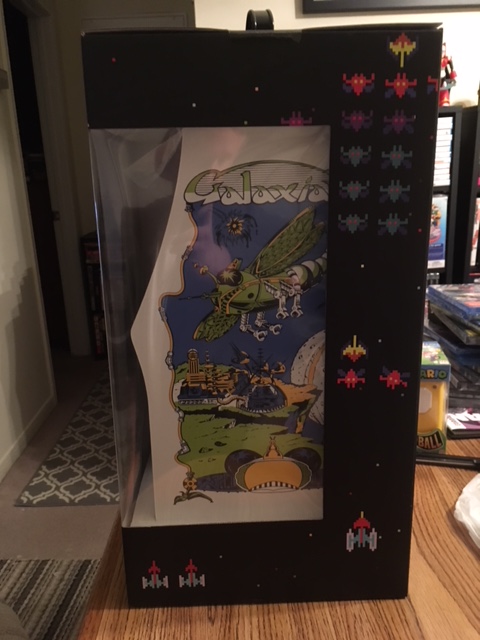 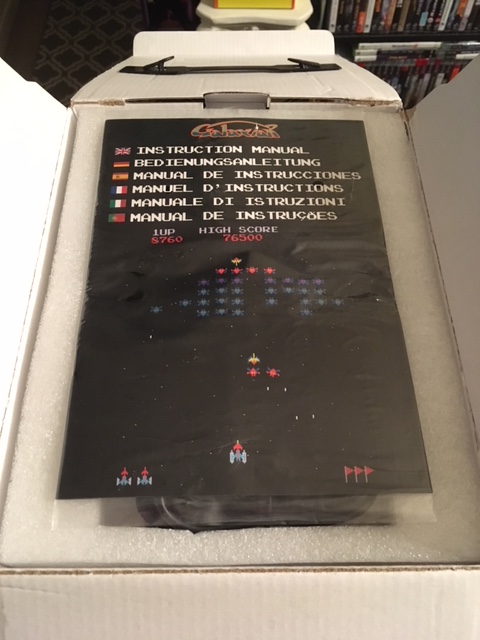 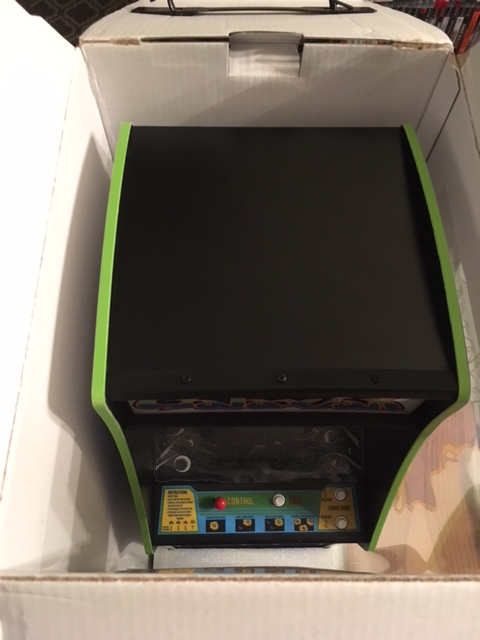 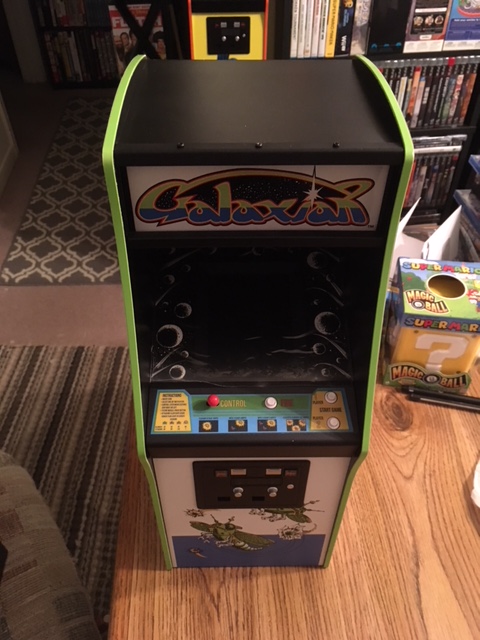 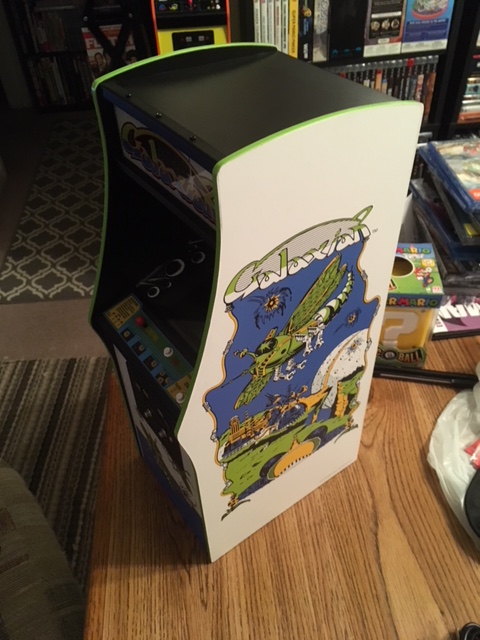 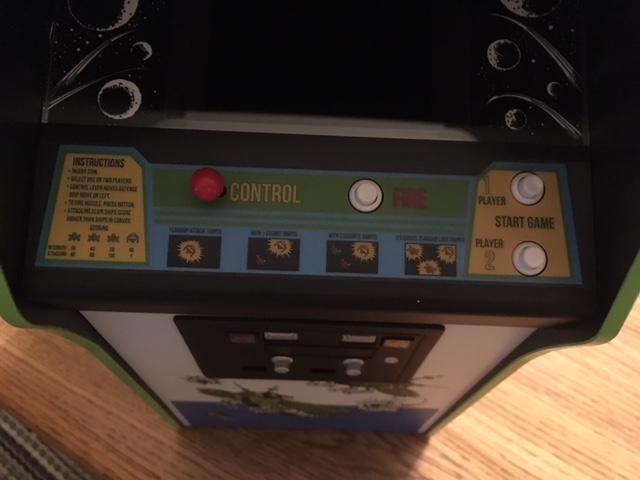 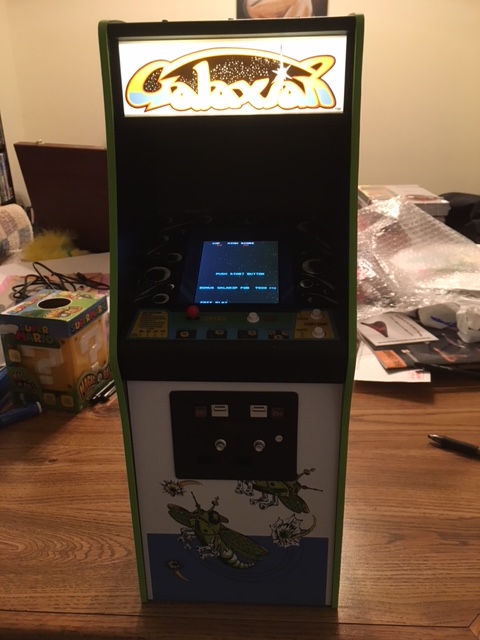 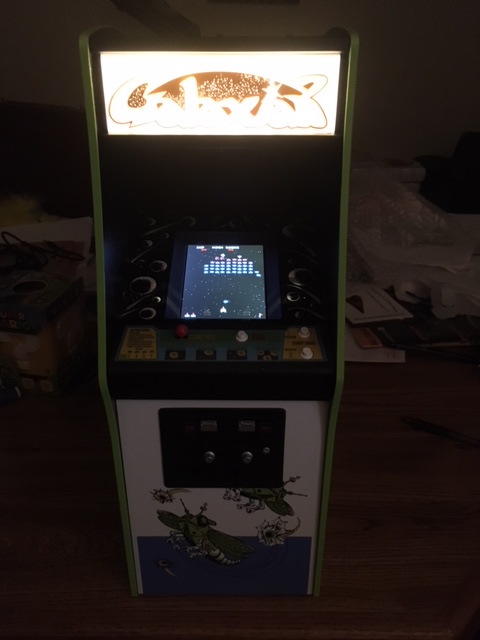 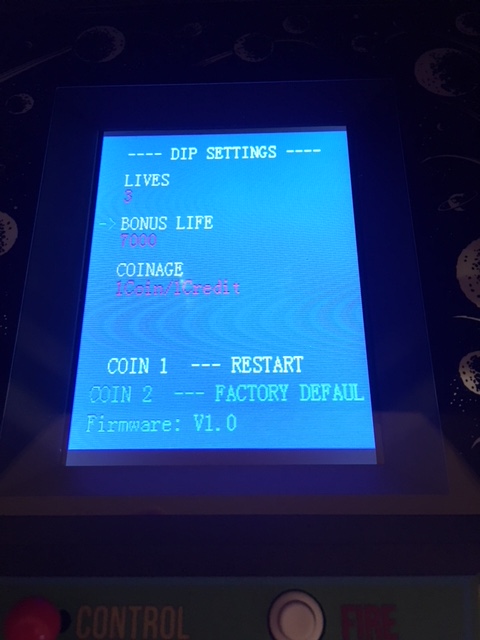 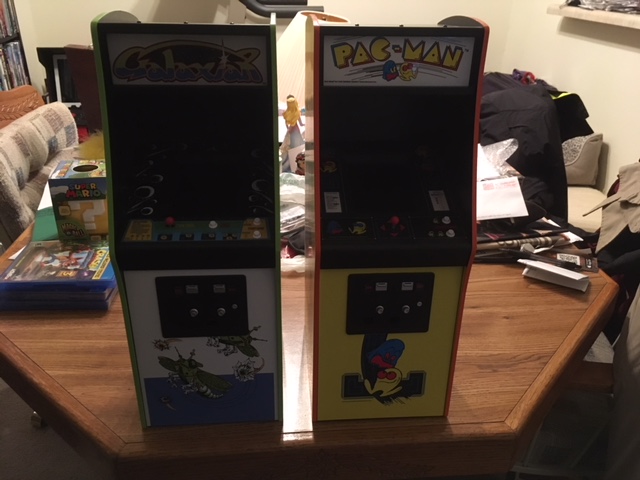 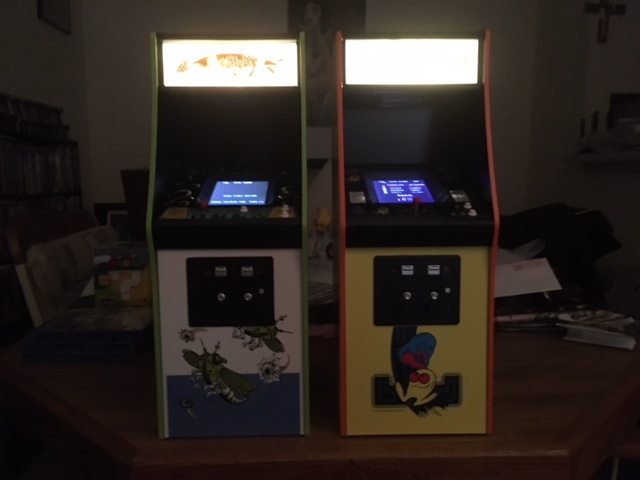 The positives are obvious—true to Numskull’s word, the cabinet is beautiful, with a stately trim and bright, clean artwork, a glowing marquee, and zero blemishes from what I can see. The little joystick sports a nice “click” and doesn’t wobble when tugged left or right. The screen itself, although not extremely high quality, seems to scale the graphics properly (despite a subtle shimmer to the ship itself) and looks authentic when observed head-on. Likewise, the audio is robust and can be adjusted accordingly. And for the true enthusiasts out there, the game does offer access to its dip switch settings, although the options are so meager, it almost doesn’t matter. The built-in battery also holds a decent charge.

The downsides are mostly nitpicks. Although the screen is vibrant and looks authentic to casual observation, enemy bullets do bear a slight flicker/shimmer that wasn’t present in the original. This makes discerning/dodging the bugs’ attacks just a touch tougher than ideal, a problem that isn’t helped by the tiny joystick that can’t be manhandled in the way its arcade counterpart could. Strangely, the beautiful marquee bears its own setback—its light bleeds onto the screen via a hidden vent tucked into the “ceiling” of the cabinet, a grate that only exists for decorative purposes! Fortunately, a piece of well-placed black tape will fix the issue. The biggest complaint shared by most, however, is the machine’s inability to save high scores, which is a curious oversight considering it does retain changes made to the dip settings (which are software-based) after shut off. Personally, I would have liked a quick reset option for those games that go awry early on, and perhaps a weighted base to prevent the cab from tilting back and forth during intense play sessions. And lastly, there’s a faint pop or crackle sometimes evident in the audio for those with perceptive ears. I only noticed it when playing the game at near/full volume, but again, in an ideal world, the sound would be completely clean.

But like I said, the complaints are minor, maybe even petty, for what is generally a striking homage to one of gaming’s greatest early classics. Unlike Numskull’s Pac-Man release, I’ve been playing this Galaxian cab almost daily, with a current high score of 27,940. It’s an undoubtedly fine, tiny distraction, and worth the $100.00 I paid for it. (Prices vary depending on retailer and occasion.)

Nevertheless, the real reason to get one of these units is not for the gameplay, but for that pristine exterior design. In other words, these are meant to be displayed more than to be played; if you’re searching for a commercial grade build of Galaxian to bang around on, I would not recommend Numskull’s offering. It’s an art piece first, video game second. (Arcade1UP’s Countercade line might be preferable to those favoring the latter.) Indeed, Numskull's 1/4 scale design might be the ideal happy medium amongst an increasingly crowded field of miniature machines built for different purposes...and budgets.

Thanks for reading! And if you want to learn more about Numskull and the mini-arcade scene in general, feel free to check out my weekly podcast.

Thanks to bigmansavagedan81 and handheldmuseum.com for the Coleco and Basic Fun pics.