"While the SNES was a constant presence in my childhood, I never had a large collection of games for it. In fact, many of the games I played I still don't know the names of. It wasn't until I say the uproar over Breath of Fire 6 that I knew I played Breath of Fire 1 in the SNES.

After reading the excellent top 100 SNES games list by IGN:

I decided to go back and play those 100 games and review them. Well, as I looked closer at the list, I realized that there are many genres that did not age well from the SNES (racing, sports) and many other genres that I am simply not good at (shmups, arcade shooters) and others that I need other players to play against for an accurate representation (fighters). Also, I played many of the more well known games such as Final Fantasy and Super Metroid."

We finished with the legacy reviews, so we are beginning with the reviews after my hiatus. Please feel free to give me advise on my reviews, as I always look for improvment.


Also, here are a number of extra rules for Destructoid:
-If you have any suggestion of a game that is not in the IGN list that I should review, please suggest it.
-Make a bet on each game to check whether Chris Charter played it or not. 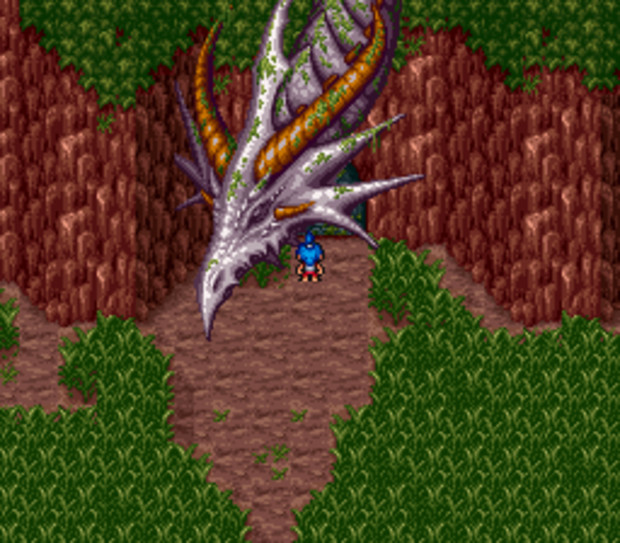 "Grandma, can the both of us unite with him, he is so handsome"

With turn-based battles, the best innovations come in the form of preparing for those battle outside of combat. BoF answer to that challenge is the Shaman system, where player characters are fused with the female shamans (hence the joke) to get some enhancements. The most basic of those enhancements is rudimentary statues boost, but different Shaman-character combinations get different results. With more effective fusion, the character changes color, and with very effective fusions the character completely transforms into a much powerful version.

Taken by itself, this system could be the best customization system in SNES RPGs, with a caveat. Yes, it shall become apparent that many of BoFs systems are accompanied by caveats.

First, the last shaman who is responsible for the transformation of at least 3 characters is only introduced before the final dungeon.

Second, each character loses their fusion if they die or get to a low HP.

These are frustrating limitations to deal with. Having to go back all the way to your village to fuse again just because you got beat up a little screams of bad game design.

"Hey Ryu, I am looking for a home, can I live in your village?"

Speaking of "your village", BoF2 had a citizen recruitment system 3 years before the first Suikoden. At one point in the game, you get control over some village, and you can invite homeless NPCs to your village. These NPCs pay you back by performing a range of services, from the useless job of guarding your town (which is never needed), to selling you the best equipment in the game. Of course, the system comes with its frustrating limitations.

First, you can only recruit 6 out of 27 NPCs, and even then, each set of NPCs are randomly assigned to one of six houses which makes recruiting the best ones a pain.

Second, once you recruit one you can't kick them out of your damn house. You recruited the thieving bastard, well, tough luck.

Again, BoF2 frustrates us with another confounding limitation. What could have been a fun way to liven up your village by getting mostly useless features is now a village filled with the same useful people in most game saves. BoF2 could have started a village building tradition, but instead gave us a half-baked idea.

If the above two section did not convince you of the prevalence of Caveman design in the BoF2, then the lack of a dash button will. Everything in BoF2 takes more time to do than it should. From navigating the menus, to walking in the street. It takes forever to reach any place, as the encounter rate is through the roof. The game lacks polish in many of its areas. It lacks polish in its hinting and fishing minigames, the droprate of items from enemies is ridiculously low, and there is no monster book to keep track of them anyways.

The backwards design of BoF2 is nearly summed in my final moments of the game. I was with my full transformed party in the last levels of the final dungeon, just before the final boss. There, I encountered a story sequence, and when it finished I was surprised that my party lost their transformed form. It had nothing to do with the story sequence. I had to escape the final dungeon with an Exit spell, reassign the transformation, then slog back all the way down. There was a town in the middle of the dungeon, but I couldn't "wrap" to it because the Wrap spell wraps you just outside the towns, not the towns themselves.

I had to slog through the obnoxious final dungeon twice just to face the final boss with my preferred party. Elsewhere in the game are more evidence of bad design. Direction are misleading and rarely helpful, so you find your destinations with a guide or by trial and error. In one instance, the game flat out mistranslates your destination and you are left to luck and heaven. I counted 35 translation errors by myself.

Ultimately, this is a game plagued by the worst of SNES design. And if I actually played it in the SNES, I would be less favorable towards it. As it stands, playing it with an emulator (Wii U or otherwise) is the sanest thing to do.

Caveman Design: -5 if played in an emulator, -10 in the original version

"There won't by any orchestration of this soundtrack anytime soon"

It can be said that RPGs strongest asset is in their ability to convey emotion, drama, excitement, and adventure with their music. It can also be said that BoF2 music conveys non of those. It is a completely bland and forgettable soundtrack. I can only say that 2 or 3 tracks are noteworthy, including and okay intro theme.

By the time I finished the game, I realized that them music was singularly uninspiring. From the basic town music, to the boring final battle theme. This is one game where the music was just written to check a box. It follows no style or genre, and it flows randomly with little direction.

Nobuo Uematsu of Final Fantasy fame expanded SNES FFs into a third dimension with his music. BoF2 music only glory is that it didn't drag the rest of the game down with it.

First, let me get other things out of the way. The combat is regular tbb, but the varied characters with their unique skills and attributes make it fresh and unique, however those skills are never explained and you are left to your own devices with only a poor text explanation to aid you.

The many towns and villages are interesting and help underscore the story, it is even easier to go to those towns by their description than by their name, mostly because you don't get the name of anyplace you visit like a normal game should.

As you can see, BoF2 is clearly a flawed gem. It is a great game encased by a thick shell of backwards design. I now understand the fondness fans had for the game, for its characters and story. I also understand why it never had much success, as it must have tested the patience of many who played it. BoF2 could have been another pillar for Crapcom to then deface years after in its current form as Crapcom, but it never was a pillar. BoF6 might be another loss for gaming, but BoF2 not being as great as it could have been was a bigger loss in itself.

It is very surprising how different BoF 1 is from 2. While 2 went in a much better storytelling direction, it took a nosedive mechanically for some reason. Bof 1 is the more accessible game, but it is a much weaker story.

I realized that I would want a more comprehensive look at the top 100 games of IGN. Therefore, I decided to revisit the earlier numbers of the list and review titles I would not normally have reviewed. I will therefore start at #100 Fina Fight and see if it deserves opening the list.