This is one game on the Saturn I played knowing pretty much that it would be good. After all both Shining Force games on the Genesis were very good and are among the top 10 games on that system.
Originally, I wasn't planning to review any import games for my Saturn Reviews series. However, the reputation of Radiant Silvergun was so glowing that I didn't realize that it never was actually released in the West. Apparently, the game was imported to a wide degree back in the day, so much that mainstream review outlets actually gave it glowing reviews.

So, in a way, I was tricked into reviewing this game by its lofty reputation, both breaking my no-import rule and my lack of proficiency with the genre. I am glad to be breaking both those rules now. 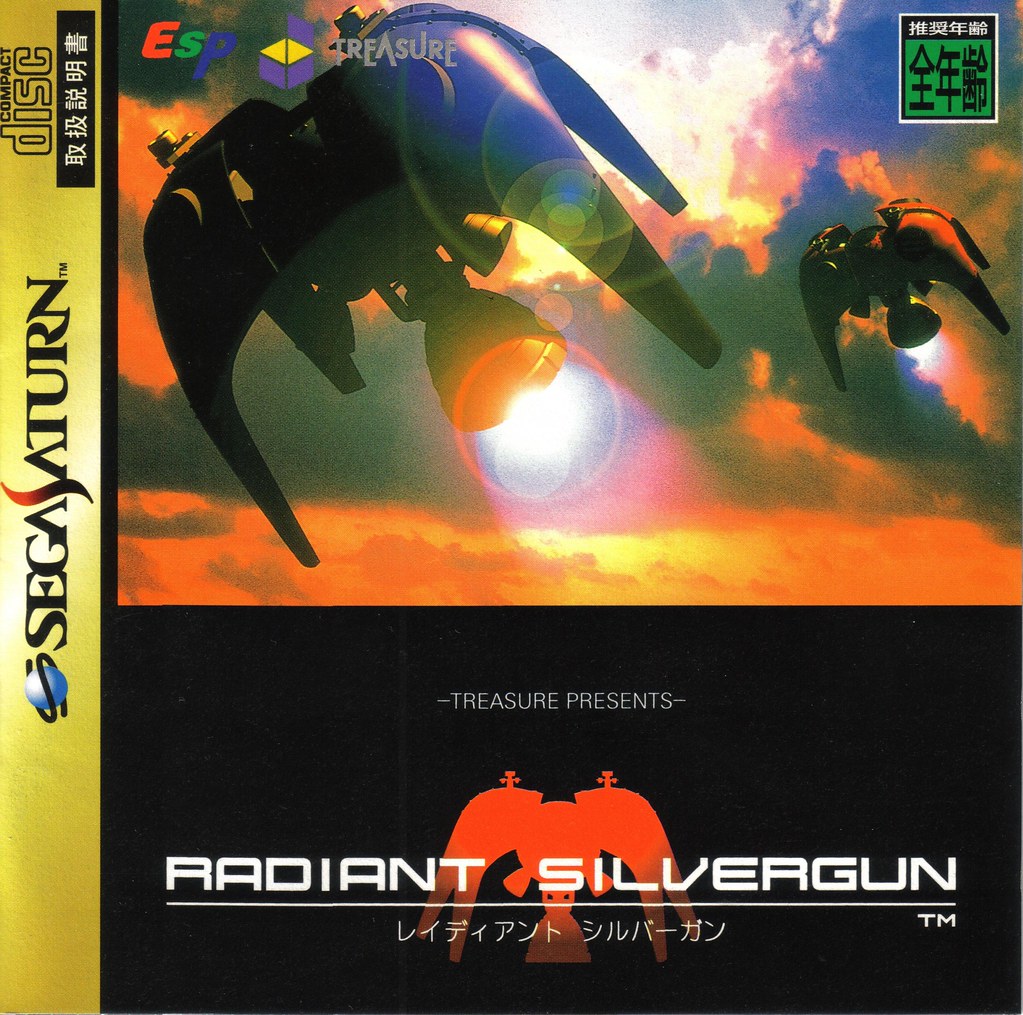 "I gave you life so you would make good progress. But you couldn't understand"

Being an imported title, I am immediately at a disadvantage to get anything from the story, which appears to be a respectable effort by Treasure. Starting with a great opening Anime sequence, the game aims to have some narrative pull, unlike some other purely Arcade Shmups (the Arcade version of this game forgoes the story).

At the beginning of each level, which for reasons I don't understand are not in a linear sequence (level 3 coming in before level 2), you can see that there is some narration to build up the story as well as dialogue between the game's characters. 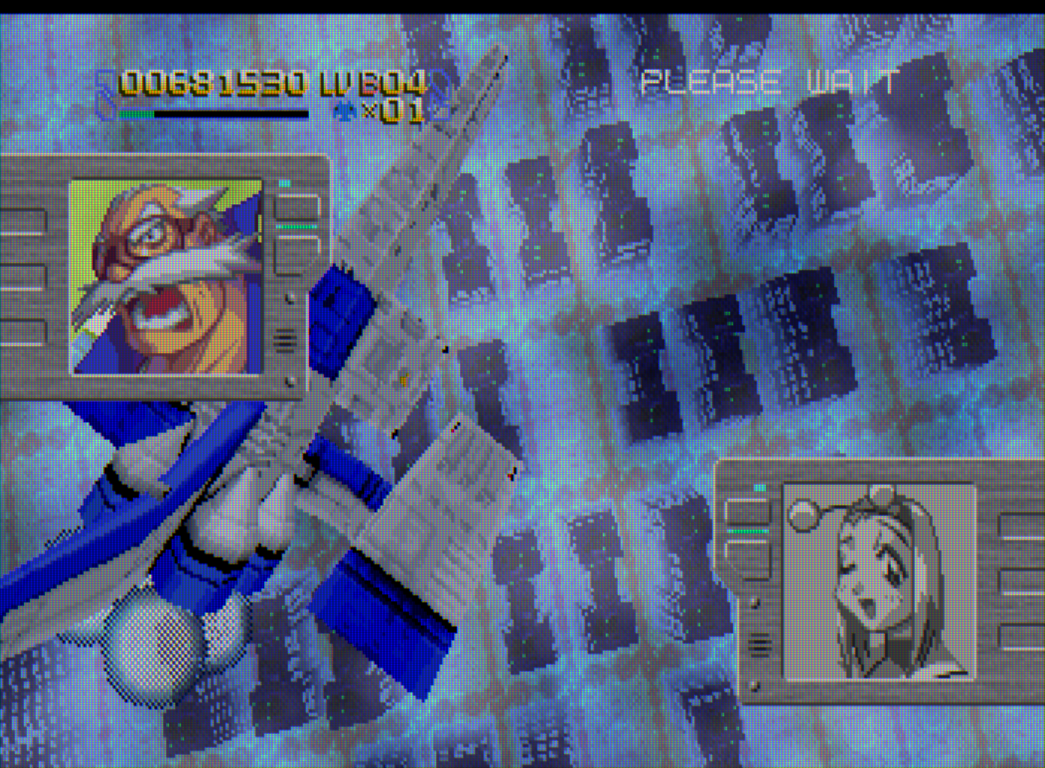 The dialogue only happens at the beginning of each level, so it doesn't distract from the action gameplay

From what I understood, there is a large prism monolith of some kind that is destroying Earth because of humanity's sins, which I guess based on the Anime shows of the time. As the pilot of the "Silvergun" aircraft, which is supported by a bigger aircraft piloted by a cool-looking old captain, you are tasked with stopping this prism monolith.

Again, my lack of Japanese language abilities significantly curtails my abilities to appreciate the game's story, but I am confident enough to know that it is acceptable window-dressing at most, as this is not the type of game to be driven by its narrative.

No, this is the type of game to be driven purely by its action, and what sublime action it is. On the surface, this is just another vertical Shmup with all the genre's associated qualities. However, Radiant Silvergun differentiates itself with both its added complexity and its sheer competency.

Complexity in the game is in two forms:

First, there are many weapon options you have at the forefront. Immediately equipped with seven weapons, you don't worry about finding power-ups during the level. Instead, you need to learn how each weapon is best utilized, as that could be the difference between death and victory. Each weapon is useful in a certain situation and giving you access to all weapons at once allowed the developers to craft specific bosses and situations which force you to utilize different weapons, for example encouraging you to use the spread shot instead of the Vulcan or homing shots. 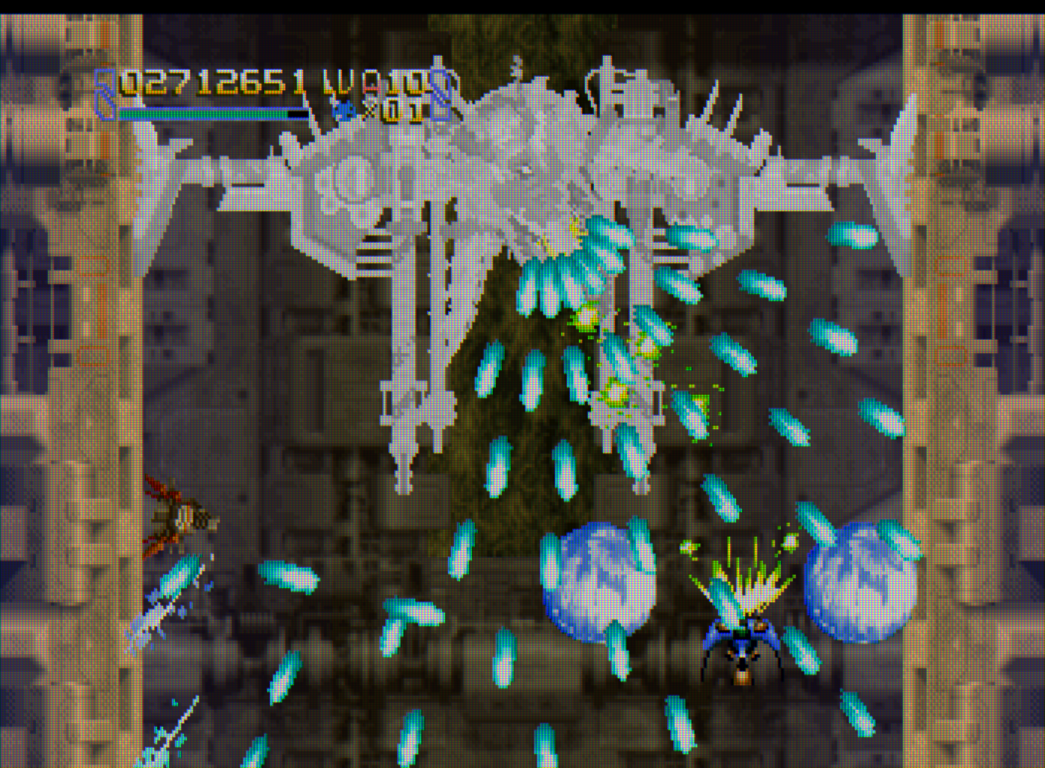 Second, this being a Treasure game, amazing bosses do not simply show up at the end of each level. Instead, the game is made-up 70% from bosses, as each level throws those amazing fights at you, each with their own unique twists and complexities.

As for competency, that is actually best demonstrated by the fact that this is one of the most accessible Shmups I ever played. It has a gentle difficulty curve before things quickly ramp-up in the second half, and it is built in a way that you feel every situation is escapable without the need to memorize patterns, only the skill to identify them during the fight. At least, that is what I felt before the final level, where things got chaotic, almost close to bullet hell levels of lunacy.

Here is where I admit that I a not particularly good at the game. Sure, I beat it on Normal, but that was with extensive help from save-states. Wishing to get a clean and honest victory, I tried the game again at the easiest difficulty with the maximum number of stocks.

Unfortunately, I only reached half the fifth level before getting my first game over, depleting more than thirty lives in the attempt. It became obvious that I wouldn't be able to do it unless I dedicated serious practice time. 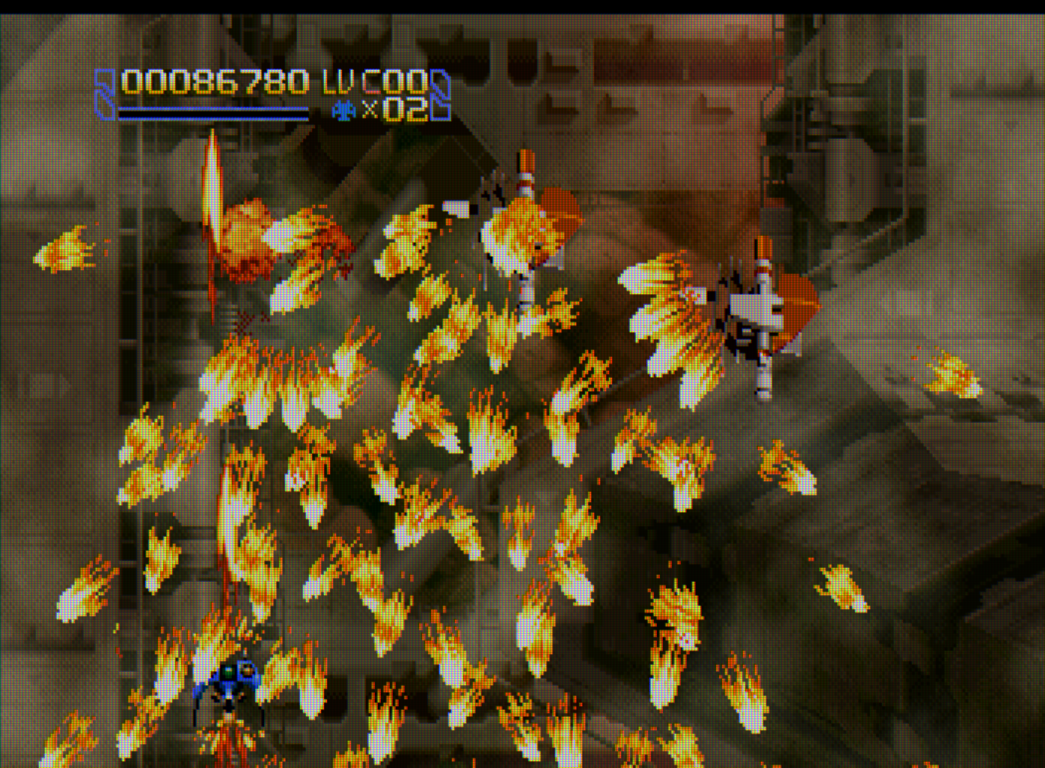 You might not believe it, but there is an escape in this situation

What usually turned me off the genre is still the same for Radiant Silvergun. This is not a game to be experienced or "beat". It is one to learn and to "master", always improving and gradually progressing. The game can take less than an hour to finish, yet it took me much more than that with save-state. However, I would bet that it would take weeks if not months to gain the necessary skills to actually finish the game with no cheats whatsoever.

"Be attitude for gain"

While Radiant Slilvergun may be regularly celebrated as one of the best Shumps on the Saturn, you know that it's not being so celebrated because of its looks.

That doesn't mean that is bad looking at all. Far from it, the juxtaposition of really well designed polygonal models into 2D backgrounds work surprisingly well, which is actually responsible for the silky smooth animation and the many incredible boss fights, many that change forms mid-battle in a variety of ways. 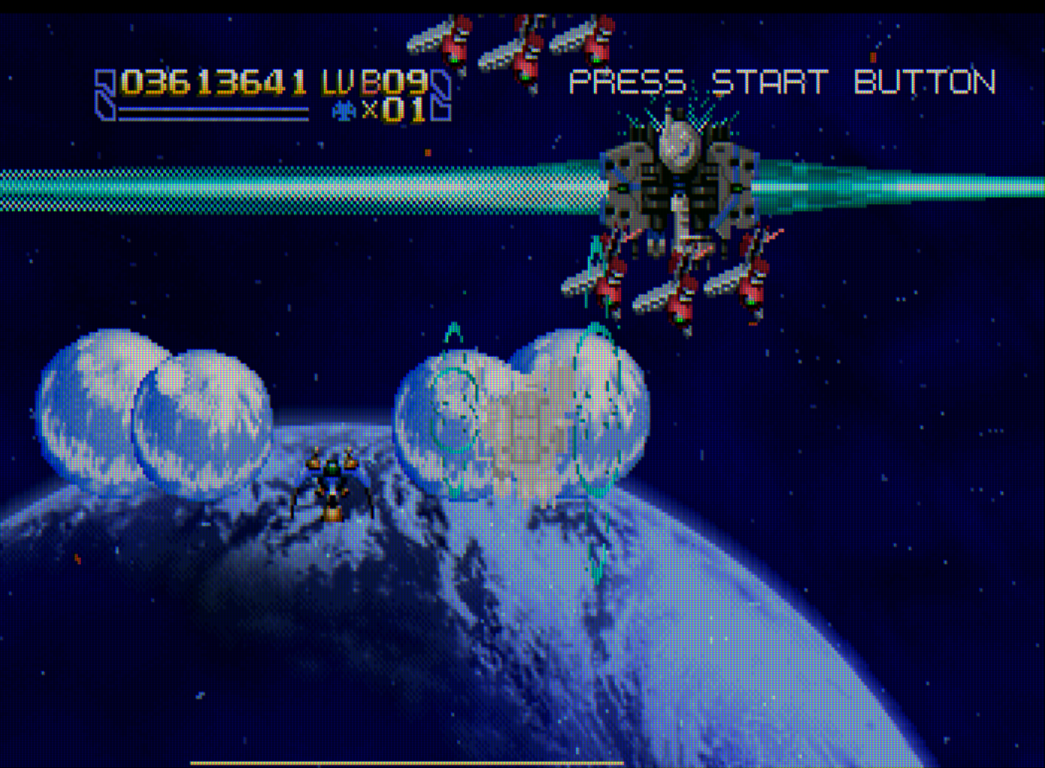 The game also has some moments of serene beauty, before the chaos of bullets ensues

It is just that the 3D polygons don't look as good in comparison to the crisp sprites of the best looking Shmup games out there. However, it should be noted that the added animation possibilities of the polygons more than makeup for the relative visual downgrade.

The same can be said of the game's soundtrack, which is a solid work by the famed Hitoshi Sakimoto. The soundtrack is great at times, but many tracks bleed into each other without a lot of differences (which is especially jarring in a genre that demands repetition) and it doesn't always have the addicting energy of some other Shmup soundtracks, and here I am mainly thinking of the Thunder Force series.

Watching experts play the game on Youtube, I am astounded by the poetry in action, seeing these players consistently do things that I know can be done in the game (I managed my own share of wow moment), but doing it consistently throughout the game, playing with perfect focus.

Based on its ability to excite even a non-genre fan, Radian Silvergun is obviously a special game. It is accessible enough to pull you in, but there are such many complexities that you will need to dedicate serious time and energy to be able to conquer it.

Which, to fans of the genre, is perfectly acceptable because the game gives as much reward as you the effort you put into it, throwing more amazing boss battles at every point, true to the Treasure name. 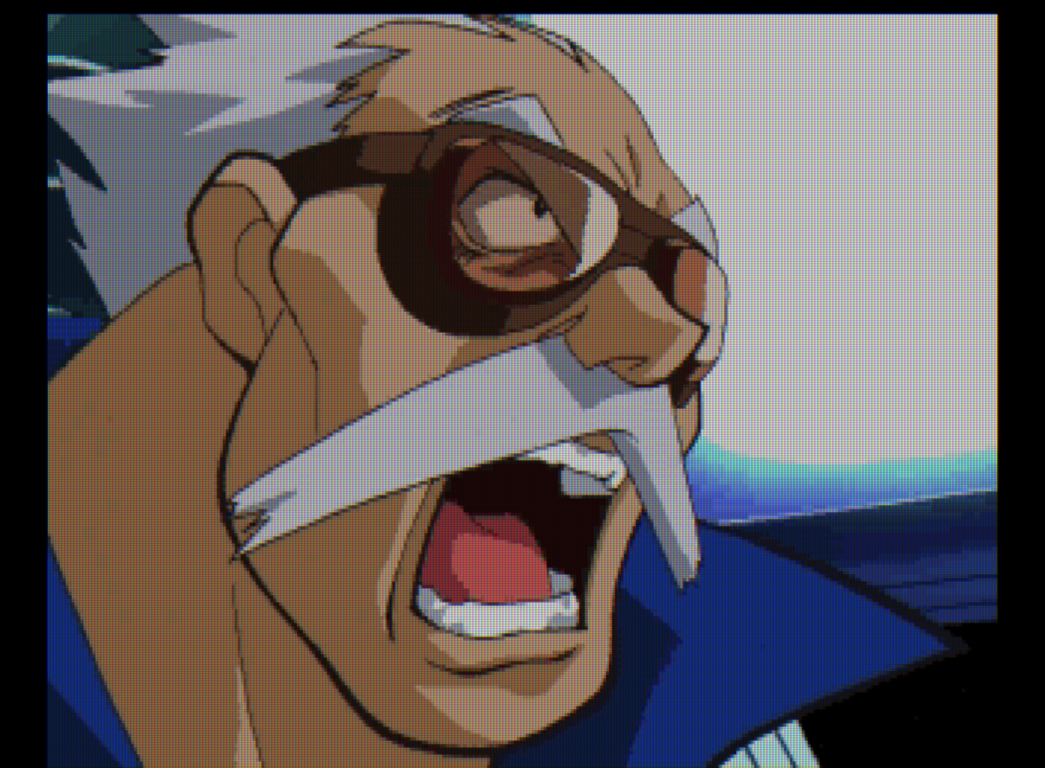 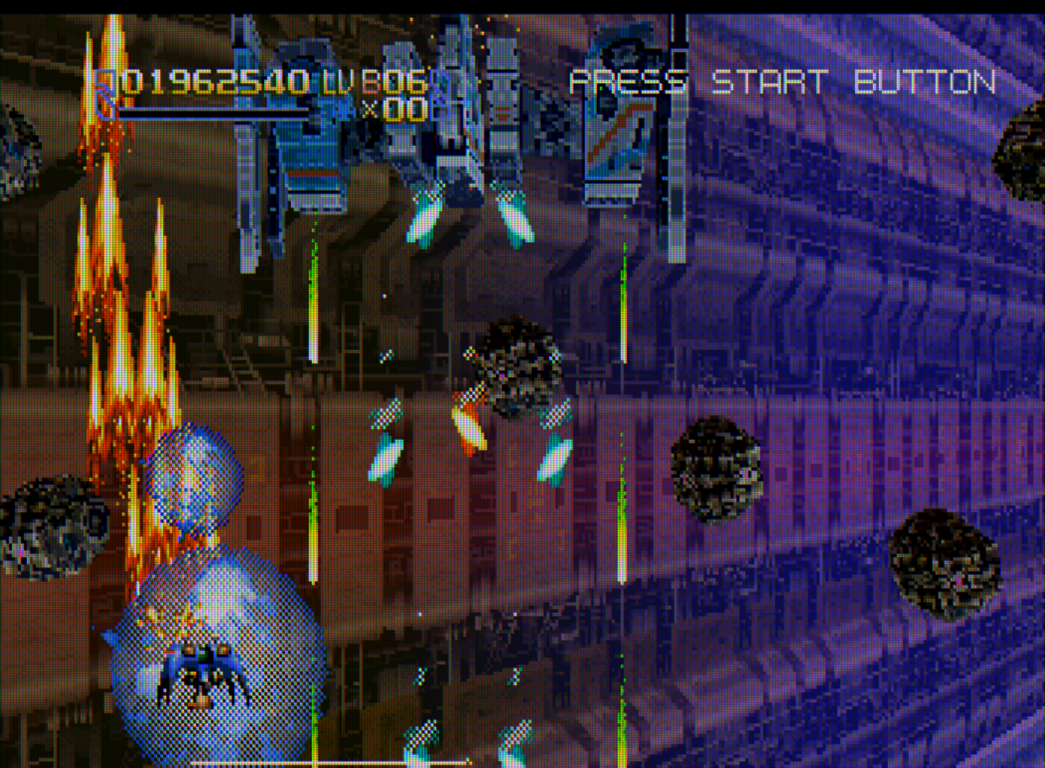 1- Learn the pros and cons of each weapon you have.
2- Use the sword to destroy the circular pink projectiles, this also charges up your super attack.
3- Use the super attack when you need to avoid nearly inescapable danger.
4- To upgrade a weapon, continue using it for an extended period until you see the weapon upgrade bonus.
5- Tap the spread weapon button repeatedly to create a shield in front of you.
6- Alternate tapping two weapons to fire a variety of projectiles.
7- To get the destruction bonus at the end of each boss, destroy the parts before destroying the main core.
8- The best way to evade bullets is to keep your eyes on your ship, not on the incoming bullets. 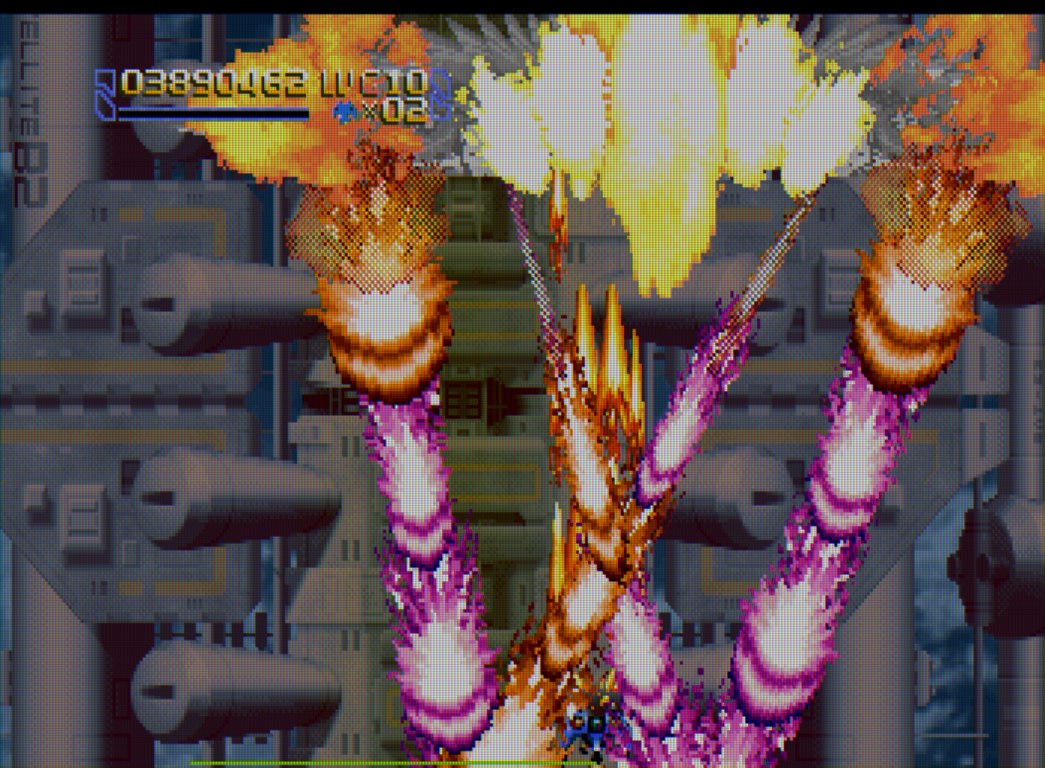 You might not believe it, but I actually escaped from this situation with my life

So I ended up reviewing one import game for the Saturn Reviews series. Thankfully, that happened to one of the console's widely regarded "must-play" games, and I ended up liking it despite not being very good at it.

Next to be reviewed is one of the most famous Saturn games, Nights into Dream, which is at number 5 on the Retro Sanctuary list.