Saiyuki: Journey West is one of the rare titles that deserve the "hidden gem" classification since it fulfills both parts of that qualification. It is hidden in the sense that few people have heard of it, with fewer actually playing it. It is a gem because it is actually a really solid game.

It is a Tactical RPG made by Koei, the masters behind the massive strategy series Romance of the Three Kingdoms, that is inspired by the Chinese epic, Journey to the West. With decent gameplay and a surprisingly good combination of story and characters, there is much to love about Saiyuki.

Yet, despite that, the game doesn't pull as much as it should. I don't feel compelled to continue going forward and feel I have to force myself back to the game. That lack of a pulling factor ultimately keeps the game from being a particularly shiny gem, but it is a gem nonetheless. 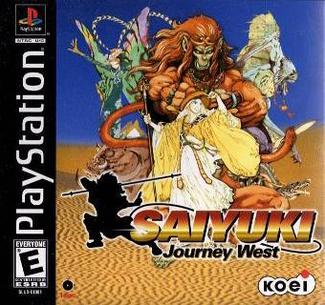 The story, as the game's title suggests, is loosely based on the famed Chinese epic. It stars a female or male monk, needs Sanzo, as he is tasked by the gods to journey West from China to India. At the start of his journey, he is given a magical staff and is accompanied by the magical monkey warrior, San Goku.

Throughout the first chapter, Sanzo meets the rest of the party, which is all compromised of magical beast warriors like San Goku. These beings are called "were" in the game's world, and they have the power to transform into terrifying monster forms. Being a good-hearted soul, Sanzo is not frightened by these "monsters", and he can accept them for who they are beneath their monstrous forms. 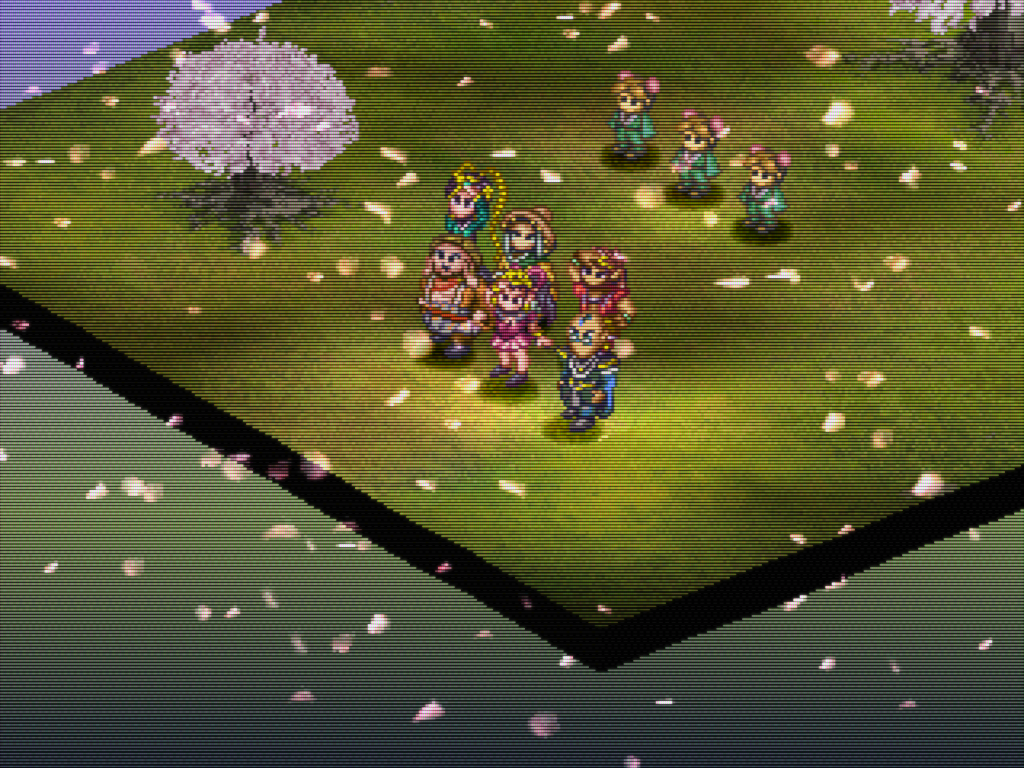 Deep down they are really kind people

These characters form the backbone of the game's story, and their interactions together are frequent, funny, and work well in fleshing them out. Outside of the main party, some optional party members join along the way, but these don't get as much focus as the first six party members, and I didn't use them as much for gameplay reasons.

At each "level', the party encounters a minor disturbance to resolve, and while most of these are simple bandit attacks, some actually offer some interesting story bits and lessons. In fact, these minor stories are generally better than the overall story which involves a one-dimensional evil "demon" threat".

Overall, the story is decent, but it is elevated by a surprisingly good cast of characters that I will remember for some time.


"Sanzo, those are the Devils. They oppose the Lord Buddha. They bring destruction"

In its gameplay department, Saiyuki offers two unique gameplay elements that are heavily linked to its story. First, Sanzo can summon Guardians that give a passive bonus to all allies for three turns. Second, each of your allies has a "were" transformation that can massively turn the tide of the battle.

Both elements are balanced in a way not to break the game but are absolutely needed to win some of the tougher battles.

The Guardian summons wastes a turn for Sanzo and their passive bonus is affected by proximity to the hero. Also, you can only summon one Guardian at a time, which means you cannot activate all passive bonuses at the same time.

As for the "were" transformation, only one character at a time can engage it, and there is a universal "were" meter that governs how many moves you can make in that form (with more powerful moves costing more meter). 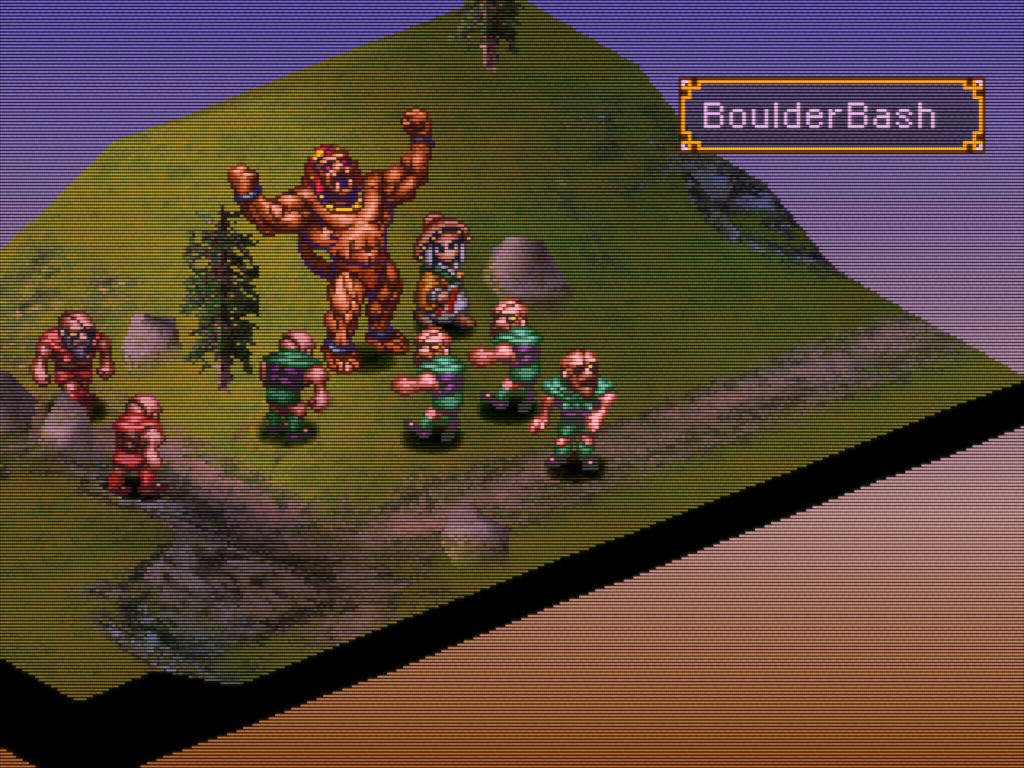 Were forms can extremely devestating

It's great that the game has these two unique systems because it otherwise is a relatively slow and simple TRPG. Maps and objectives are similar, and the gameplay is slow that I must recommend you to stop all battle animations to enjoy the game.

A big reason for that sluggish aspect is the low movement stat of most characters except San Goku and Ryorin. San Goku has an excellent teleportation ability that allows him to cross vast distances, and Ryorin is pretty mobile in both regular and "were" forms. The others are significantly slower, so much that it forces you to slow the entire battle so as not to isolate your two faster characters (or have them hog all the experience).

It is worth noting that this doesn't become an obvious issue until the latter third of the game, at which point there is already a feeling that the story is a little bit longer than it should have been.

Outside of battles, there some other gameplay and story activities to take part in. Each city has several stores that offer some side story tidbits, with some composing a series of sidequests that can help you gain special spells or equipment.

Some of the bigger cities have "job posts" which allow you to do bounty missions to gain money and experience. Another way of getting experience is competing in each city's "dojo" and challenging the master of those dojos.

Unfortunately, this means that most of the side activities will require you to engage in just more of the same battles, which become boring over time. In fact, I would argue that this ruins the balance of the game to a certain degree, but is needed to keep your equipment up to speed with your progress. 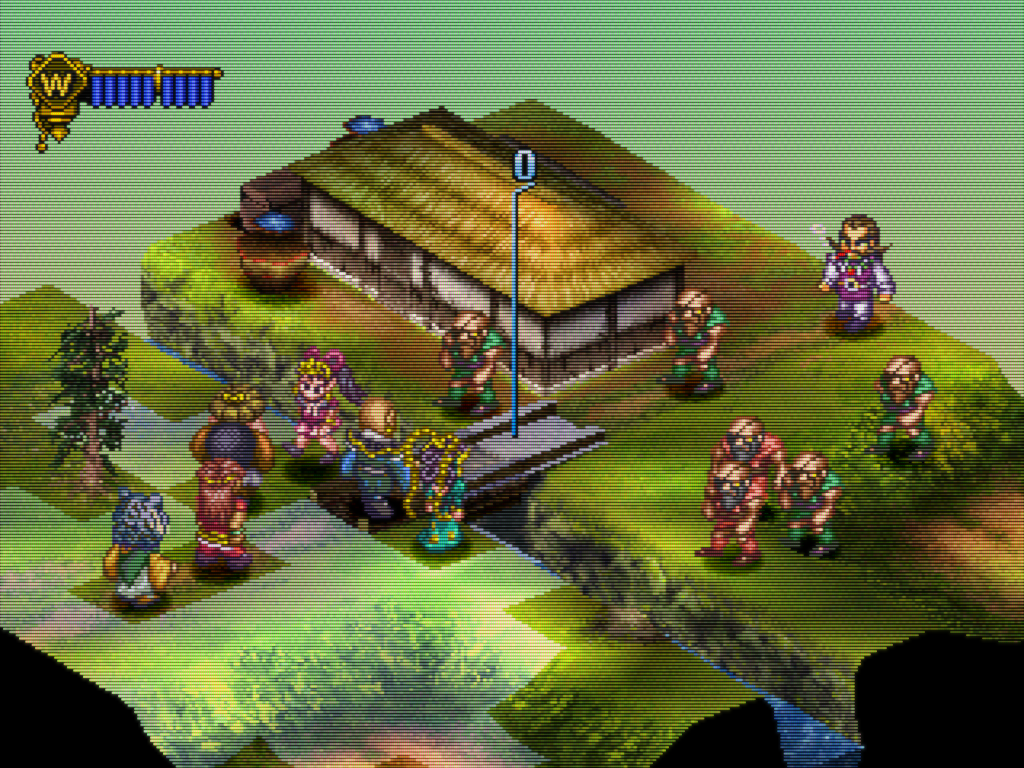 It sucks if a nice map is then used several times

It's never a good sign that playing more of the game can be considered a negative, but that's the case with Saiyuki, as it is a perfectly good game for two-thirds of the time but it drags on wastefully at times.

Thankfully, there is also an admittedly fun card game that can help you get some great equipment, and some of the optional story bits are charmingly funny.

Like many of the PS1 games that ignored the trend for fully polygonal graphics, Saiyuki is a much better-looking game for it. The sprite graphics are really good, and the character's designs really show in the design of these sprites as well as their animations.

Of particular note is the gorgeous large portraits that are normally made by Koei for the Romance of the Three Kingdoms games. These portraits are not only really beautiful, but they are varied and convey emotions really well.

These emotions are then conveyed in the sprites themselves, which look great, but not spectacular. Something that should look amazing is the "were" transformation for each character. However, these outsized sprites did not properly enlarge and their blockiness is apparent because of that. 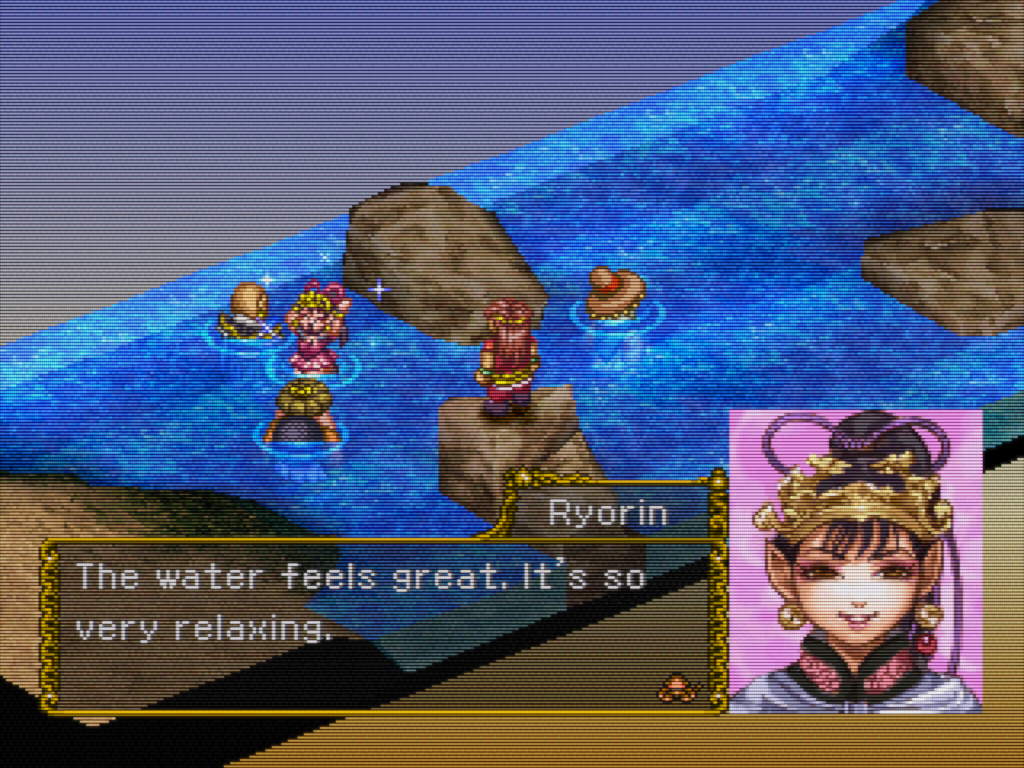 The beautiful character portraits and sprite animations are always in sync

It is worth mentioning that the special effects for transformations, spells, and various special attacks are really good. However, to speed up battles, I wholeheartedly recommend you turn them off.

What you shouldn't turn off is the game's soundtrack, which has some really good music. Of particular note is the heroic theme "Ally of Justice" and the battle music "The Strangest Monkey in History". These are some really nice tracks that are demonstrative of the general style of the game.

True, there aren't many tracks considering the length of the game, but what's in is worth listening to. That wasn't immediately apparent given the terrible music in the game's Anime opening (which is awful in a rendering 90's way).

When the biggest complaint about a good game is that there is simply too much of it, then it means that game is probably worth at least giving a try.

In the case of Saiyuki: Journey West, here is a game with an interesting story and characters and some really solid production and gameplay. Sure, the game does wear its welcome a bit, but that didn't ruin the fun I already had with the game. 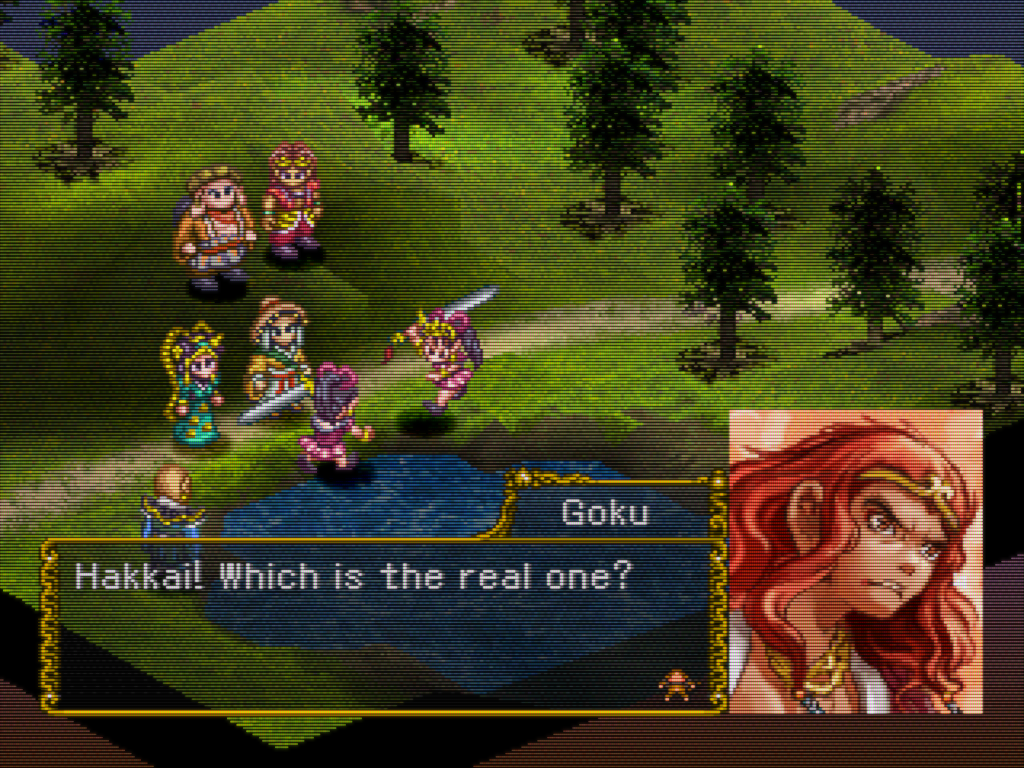 1-Utilize the correct "were" form for the situation, you can only engage one form at a time.
2-Use the dojo to get exp.
3-Use the post to get money.
4-Turning to "were" damages nearby enemies and helps expose item chests.
5-Turn off attack animations to save time (you will thank me for that).
6-Customize your key party members to have one elemental magic (always upgrade the spells for everyone except those with low MP).
7-Learn how to use San Goku's cloud ability to the max. 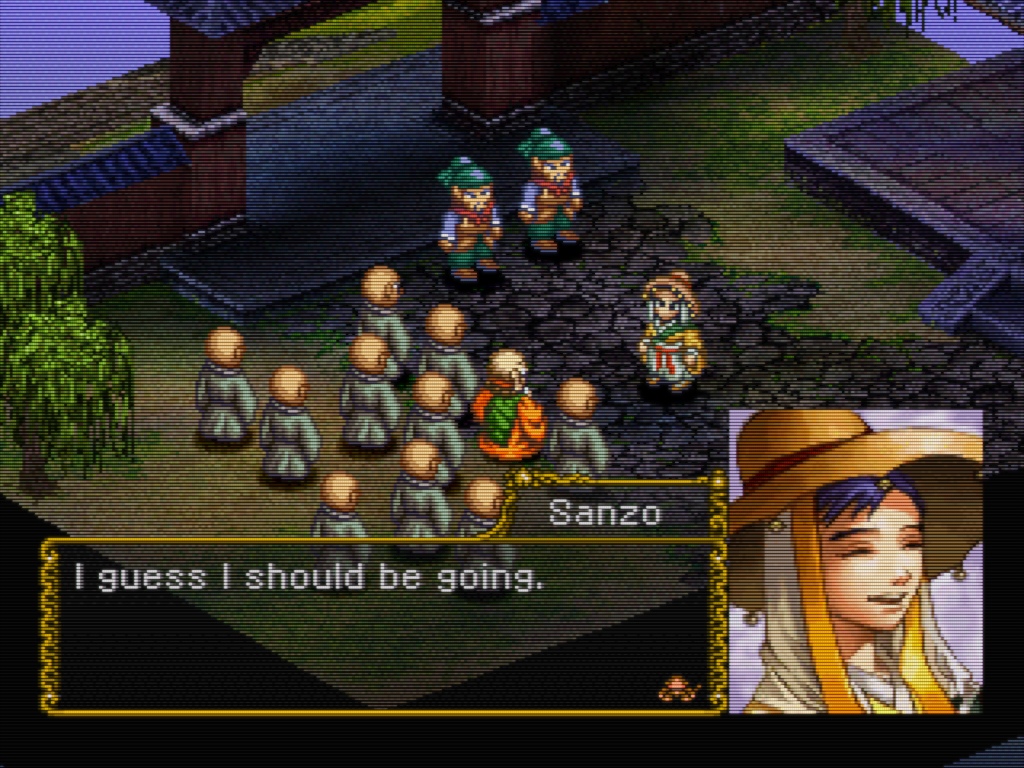 I guess you should 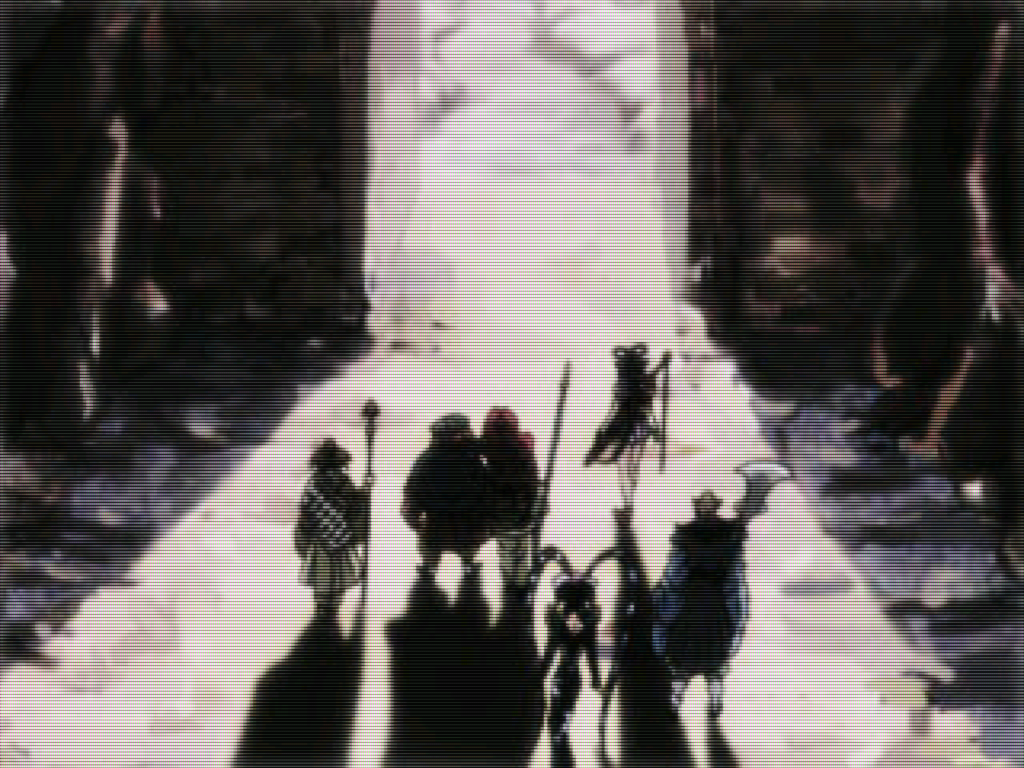 The few anime scenes we get are pretty nice

I a glad that I played Saiyuki: Journey West as part of this review series since I wouldn't have otherwise been exposed to it. It truly is a hidden gem, and I can imagine loving it much more if I played it when it was first released. However, I cannot ignore some of its faults at my current level of experience.

Next on the list is another game that I would have probably loved to bits back in the game but is famous for being a flawed gem; Saga Frontier. Initially, I was going to cancel this review since a "remastered" version of the game is being released on the Nintendo Switch. However, since the game is built for multiple playthroughs, and because the smoothed sprites look bad on the remastered version, I am going forward with playing this game.