20 or so years ago, I was a young boy enamoured with the bourgening world of video games that was opening itself up to me. Back then, it felt like there was always a fresh experience for me around the corner, be it behind a visit to a classmate or within one of the rare games I was gifted each year.

Helping keeping my horizons wide was the proliferation of demo discs, an art lost to the ages, both due to the advent of digital distribution and the realization on the publishers' part that letting people play their mediocre sludge before deciding to buy it or not is bad business compared to a delicate balance of lies and FOMO.

Being a kid affords you an interesting set of abilities when it comes to experiencing media. It's simply not the same to wake up on Saturday mornings to watch cartoons as a kid as it is to binge something on Netflix as an adult. Having time is a big one, of course, but not the one I want to highlight right now. Instead, let us talk about novelty.

Something novel is something new and something new is exciting. Be it a genre of game, a style of song or a way of cooking, novelty lights our brains on fire and we spend a decent chunk of our adult lives chasing that high by rummaging through the stuff that once had our attention in full. I don't know why that is, and I'm frankly not interested in such a discussion right now.

What I am interested in however, is discussing a certain something that caught my attention when I perused those demo discs I had, which my very young brain thought more novel than anything else:

That, was a gameplay trailer for Legacy of Kain: Soul Reaver set to Sanctus Christus, a dramatic choir piece composed by Chris Payne for his Horror/Gothic/Modern album in 1995. And I am captivated by this trailer to this day.

Looking back on it now, it is not a very well-composed trailer, as it hurridly showcases the standout elements of the game (the executions, some environments, setting enemies on fire, absorbing souls, shifting the world and gliding on broken wings) using some simple cuts with no context, hoping that the shoddily captured footage set to the bombastic music will sell you on an epic and exceedingly violent action adventure with a tone that the actual game doesn't carry. And by god, were they correct.

I don't think I ever watched this trailer more than once or twice back then, but it still stuck with me for a long time. I remember thinking along the lines of "Oh man this is so violent, it's disgusting, I really shouldn't watch this. But it's so awesome, I can't look away."

I've already detailed my relationship with violent video games here, but in short, I was very much against them on principle until I played Uncharted: Drake's Fortune and was forced to confront some mature content I was very much not primed for.

But that trailer was different. There was something spellbinding in the aesthetics that gave me pause, that X factor which presented itself in a more intriguing manner than the likes GTA or Battlefield ever did. I've named this aesthetic "Eloquent Edge" as I think it perfectly captures the essence of Soul Reaver, a game that revels in its macabre nature without falling into the trappings of 90s edge and its progenitors.

A decade passed and I carried on the memory of that trailer and eventually found my way to the Youtube channel of LeadingManAE, who just so happened to specialize in the Legacy of Kain games. It was then that something utterly magical happened.

Second-hand, I consumed the series 10 minutes at a time through his channel, trying my damndest to apply my then-blossoming English skills to the maximum. In doing so, I was absorbed into the world of Nosgoth and the story it had to tell. I had gotten into a couple of book series by that point, but nothing my feeble brain could conjure up compared to the presentation of these games.

It was simply delightful to engage in the setting, its story and its characters. So much so that the faux-Shakespearean dialogue the series is famous for informed my mastery of the English language, something I hope is evident, given that I've been playing it up for more than a page already. It taught me that language can be fun and I haven't looked back since. How can someone look at a fun word like "defenestrate" or "neophyte" and not do everything in their power to make use of them properly at least once?

Eventually, I played through the series myself, about a decade after it died. Having little in the way of a fanbase to hang out with, I've had the thoughts it bore stirring within me for close to 15 years now. I cannot abide by the torment of unprocessed thoughts any longer, so I intend to pay my proper respects to this dead franchise in the only way I find suitable:

If you want something silly to read, I did write a comedic summary of the series filled with some lies a few years ago for a Cblog prompt. It was much smaller in scale compared what I'm about to dedicate myself to, but if you know the actual story you'll probably get a few laughs out of it. Unless it is terribly cringe-inducing and horribly unfunny. I'm kinda afraid to look.

It is my intent with this retrospective to detail where Legacy of Kain came from, what it achieved and what its unwilling corpse left behind. And unlike my coverage of From Software and Tales of, this will be neither comedic jank archeology, nor a series of reviews connected by analysis and series-wide rankings.

Instead, this will be a detailed look into the story, mechanics and world of all the games to the best of my abilities as a longtime fan. I'm betting there are a few other fans out there chomping at the bits, hungry for some discourse, who will enjoy this endeavour of mine. It was always my impression that the series was quite popular and that the fanbase went dormant but is still out there, waiting to be stirred back to life at the mere mention of this legendary franchise. So let us test that supposition and enter the world of Nosgoth.

We begin with the founding of Silicon Knights in 1992, courtesy of Denis Dyack, one of the key creators of of the first Legacy of Kain game. After creating two PC strategy games (Cyber Empires and Fantasy Empires) and in the middle of a third (Dark Legions), Dyack pitched the initial concept for a "vampire action RPG" to Crystal Dynamics in 1993, which he had worked on together with another key individual, Ken McCulloch. The intent being to break into the console market, since they weren't content with releasing on PC anymore.

Amidst the pitches they presented (which included an early version of the disastrous Too Human), only the vampire game "The Pillars of Nosgoth" was given the green light by Crystal Dynamics. 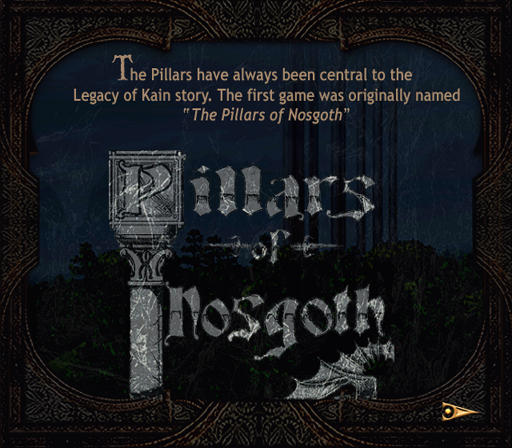 The intent with the game was to create a mature action-adventure game for adults, where every character considers the player character evil and there is no simple "ultimate" equipment. Cited inspirations include the Clint Eastwood movie Unforgiven, the Necroscope series by Brain Lumly and The Wheel of Time series by Robert Jordan.

I am not personally familiar with those properties, but thankfully Dyack explained what each one brought to the game. Unforgiven centers around a group of morally gray cowboys, which informed the approach of making an anti-hero adventure through a story with no clear good or evil. Necroscope is a morbid series about a man who speaks with the dead and fights vampires, which gives us both the subject of the game and its tone. And lastly, The Wheel of Time is renowned for its detailed worldbuilding, something that would be key to the series' success.

So, what do we end up with then? A morbid and morally gray vampire story with detailed worldbuilding. That's a sentence that perfectly encapsulates the game that The Pillars of Nosgoth became after it spent 3 years in development and released on the Playstation in 1996.

But before we dive into the actual game, I'd like to talk a little about the discared title of it. Specifically the etymology of the name Nosgoth, which refers to the setting of all Legacy of Kain games. Now, I haven't looked for proof of this, but it is my belief that the name is derived from a simple clipped compound of the words "Nosferatu" and "Gothic", which I think fits, since Nosgoth is very much "Vampire Germany", especially in the first game.

I just wanted to highlight that because I hadn't realized that it could be the source of the name Nosgoth before, which I have always found to be a very effective name that strikes a good balance between being memorable and being pronounceable. Bioware and their damn Thedas (The Dragon Age Setting) could have learned a lot here.

The nomenclature of a game is something you rarely, if ever think about, but when you're creating a detailed world, nailing that is an excellent shortcut towards making the player engaged with the story you have to tell. It's such a common pitfall to overload a game with a bunch of terrible "DM's first campaign" names that either invoke laughter or invite one to forget them immediately.

Thankfully, the upcoming subject of my attention avoided that pitfall and proudly carries the name Blood Omen: Legacy of Kain. 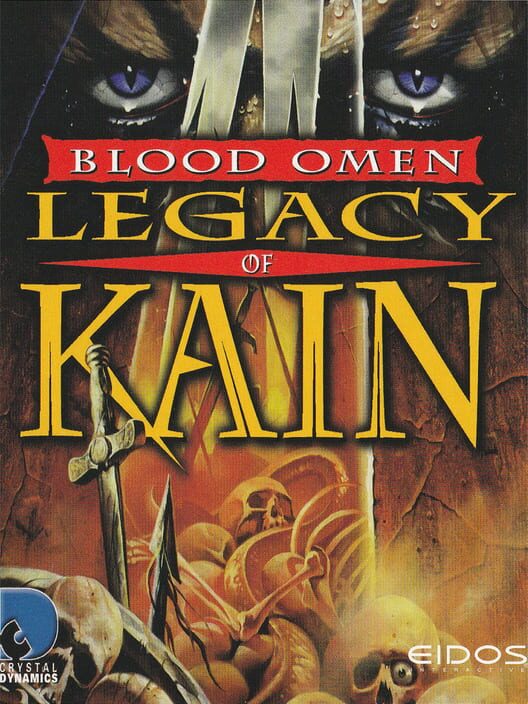 Next time, I will begin this retrospective in earnest and I hope you will join me for the long journey in Nosgoth across the ages. While I'll be going into ludicrous detail, nothing beats playing the game yourself, so if you haven't done that or need a refresher, I recommended picking up the GOG release with the GL Wrapper patch by Verok, which cleans the game up well and even adds subtitles.

And if that's not enough, you could give this wiki page (plus its sources) a look. There is also this FAQ about the game from Silicon Knights, which is well worth a read. Vae Victus!