Making video games is messy business. This much is known. But the 90s was its own beast. Creators struggled far and wide, inventing trailblazing technologies to realize their vision in a quickly changing landscape with much too limited hardware. Biggest among these technologies was the jump to 3D, which birthed as many classics as the franchises it brought to ruin. Alas, technology was not the only hurdle of today's subject.

During the collaboration between Silicon Knights and Crystal Dynamics to produce Blood Omen: Legacy of Kain, things were rough. So rough in fact, that the police had to be called once. This tension culminated an a court case between the two companies.

Details are sparse, but the outstanding investigative work of MamaRobotnik over at NeoGaf (Both their post-mortem of Silicon Knights and their research thread on cancelled Legacy of Kain games) affords us some knowledge on the matter.

Crystal Dynamics meanwhile, present themselves as a necessary element of the game's development, providing multiple people to fix up the game's structure, code and script. Of particular note were changes to the game's name and the names of multiple characters to make it more marketable. Guillaume became Malek, Adonathiel became Ariel, Infernum became Vorador among others. I am simplifying what details we do have access to, so I implore you to read the full threads on the matter.

I am keen to believe both accounts, as Silicon Knights strikes me as a studio with greater aspiraration than business sense (as proven by the later release of Too Human) and the fact that Activision did end up publishing the game, which could only have happened if Crystal Dynamics let them. As with the series itself, things are not as clear-cut as one would want, but that is life.

And then, there was silence.

The court case began in 1997, it was settled out of court, the two companies went their separate ways and Eidos Interactive somehow ended up with the rights to Legacy of Kain. All in all, a proper clusterfuck of clashing visions, greed, deceit and bad luck. And this, this is the first X-Factor that made Legacy of Kain what it is. The tragic fact that the series found itself unwillingly removed from its original creators, never to have its intended sequel ideas fulfilled.

Suffice to say, that is not something anyone could ever intend for to happen to their creation. In fact, it would not be strange in the slightest if this is where the story ended, with Legacy of Kain stuck in the IP vault of Eidos Interactive forever. But destiny had a different design, and the series would resurge two years later. 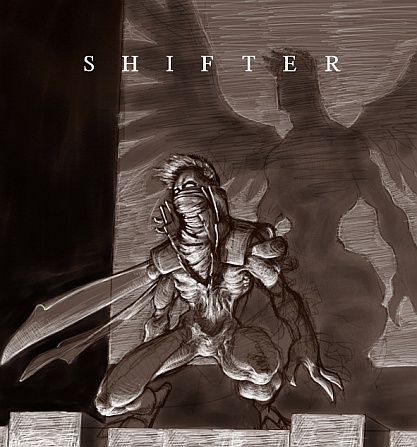 Shifter is a game that does not exist. Inspired by Paradise Lost, Amy Hennig and artist Arnold Ayala of Crystal Dynamics worked together to create a new IP for Eidos Interactive. The gist of it was the following pitch, as explained by Hennig in 2012:

"The protagonist was essentially a fallen angel of death, a reaper of souls hunted by his former brethren, and now driven to expose and destroy the false god they all served."

"The hero was an undead creature, able to shift between the spectral and material realms, and glide on the tattered remains of his wing-like coattails. We conceived the spirit realm as a twisted, expressionistic version of the physical world. The hero was bent on revenge after being betrayed and cast down by his creator"

When presented with this, Eidos Interactive insisted that the game be turned into a Legacy of Kain game, a common story in the industry in order to maximize IP usage. But unlike Star Fox Adventures and the like, Shifter was in mere conceptual stages before the desired change, making it a surmountable challenge to merge the Shifter concept with the world of Legacy of Kain.

Now, despite being a sequel to the "bad" ending of Blood Omen (mapping the "false god" character onto Kain), the resulting game would end up with a very different feel to the original. Set in the steampunk postapocalyptic nightmare future of Nosgoth, Crystal Dynamics utilized the power of the Gex Engine to present the game in full 3d using a third-person camera with no loading screens.

If that was not ambitious enough, they also managed to implement the ability to shift between the Material and Spectral planes, which, unlike the Light and Dark worlds in A Link to the Past, could not be solved by loading in completely new assets. Instead, they utilized a groundbreaking new technology to warp the vertices of the existing assets using "simple" motion tweening on the environment itself.

Suffice to say, the game bore with it absurd ambition, which when faced with the reality of the Playstation's specs, available resources at Crystal Dynamics, pressure from Eidos Interactive and the aftershocks of the legal troubles with Silicon Knights meant that the game would release unfinished with a different ending than intended and about a third of its content missing. And that, is the second X-factor that made Legacy of Kain what it is. Failure to fulfill the intended vision of the second game.

Taking the two X-factors together, we now have an utter nightmare scenario that by all accounts should have spelled doom for the entire franchise. Not only was it taken from its original creators, but when the next set of developers took the reigns, they failed at delivering a complete product with a fulfilling ending. One can barely imagine a worse place for a franchise to be in outside of explicit death.

Inbetween the black pits of these two ill-fated events, there was a path. A path Hennig and her team found and walked, somehow managing to stitch together elements from Blood Omen not designed for further use with the failed carcass of their own sequel in order to make something truly special. I can think of no greater creative achievement in the video game business.

But no. They did it with barely a plot hole to their name and managed to create my favourite story in the medium. And to understand that story, we must of course dive into the game they first created, both what it was meant to be and what it ended up being. Next time, we start going through Legacy of Kain: Soul Reaver.

Until then, keep our current quandaries in mind like usual: