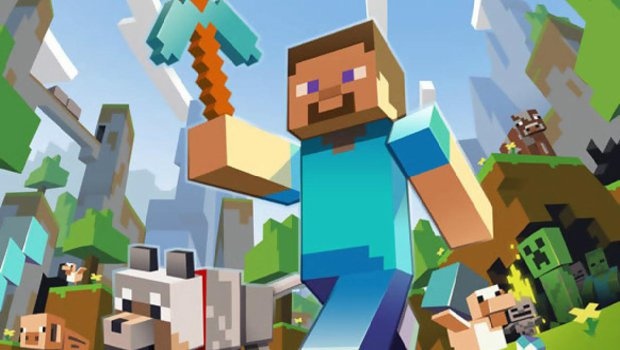 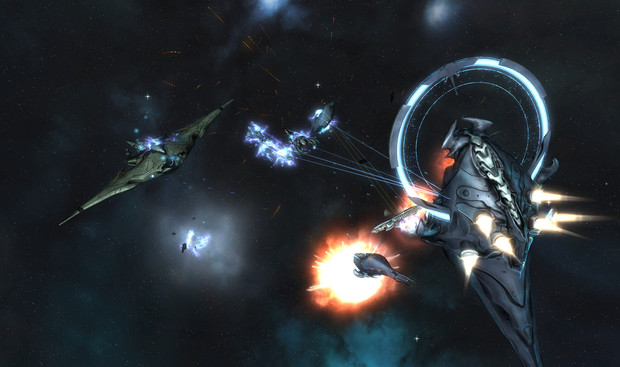 Take a look at that screenshot of Sins of a Solar Empire. It's pretty, but it’s a game I don’t like. It’s too slow, the superweapons break the balance of the endgame and Titans are just a focal point of battle created to distract players from the gaping maw of RTS design problems: reducing the whole game to a round of rock paper scissors.

Each specific type of ship is designed to take down another specific type of ship. The problem with this is that if your fleet is not specifically designed to dismantle the enemy then you are in for a long, drawn out, dull battle. Stuck, just watching as a cosmic ballet of rock paper scissors plays out for several boring minutes. At least, until you bring in reinforcements dedicated to fixing the problems of your own forces, then it’s back to watching.

In Sins fleets are largely made of cruisers and as I tend to play as the TEC faction, that cruiser is the Kodiak – no other main ships, just a load of Kodiak, a few anti-fighter ships and a couple of capital ships to tank fire. That’s all I need for most situations, unless the enemy brought lots of bombers to counter my Kodiak, and then lots of cruisers to knock out my anti-fighter corvettes – then I’m screwed. And that is the problem with strategy games based entirely on the idea of countering something the enemy has done: you will either win with ease or be crushed with ease – and anything in between becomes a dull numbers game. Where armies are perfectly matched there is no fun, only attrition as the player has to sit, watching laser beams and rockets fly at each other as no progress is made. It’s just not interesting. 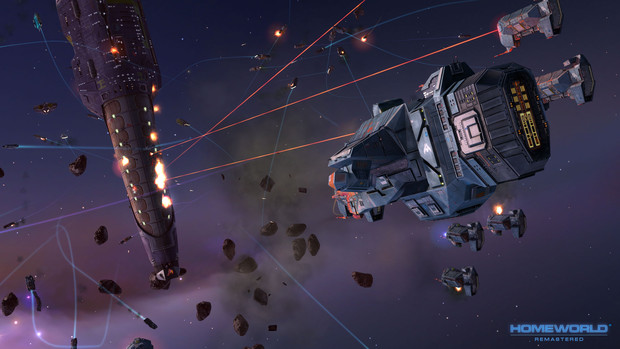 One of the easiest ways around this problem is to make the strengths and weaknesses of units dependent on the actions of the player. Rather than just having cavalry be good at killing infantry, the Total War series gives cavalry a basic stat bonus against them, but a massive charge bonus – meaning that, yes cavalry is good against infantry, but not good enough to simply waltz over them. To use the advantages of the unit to the full, flanking charges are needed on the part of the player as a charge in the flanks would trample enemy soldiers along their entire line, deliver a massive morale shock, and then leave the cavalry’s standard stat boost to finish the job. The game of rock paper scissors still exists, but it requires constant player participation. It’s no longer boring. 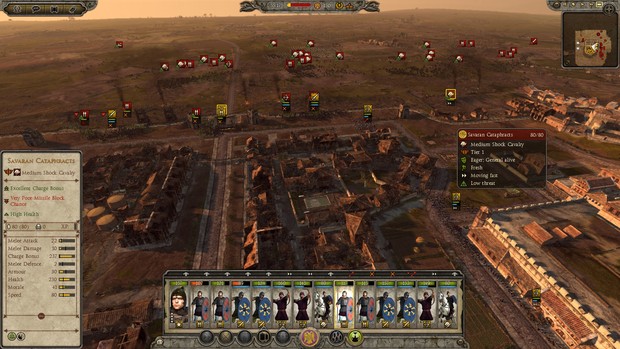 However, part of what makes it rather easy for the TW series to create interesting tactical situations like that is its reliance on history. It would be easy to make ranged infantry devastating from afar and weak up close, giving it distinct advantages and disadvantages in an attempt to balance the unit – but history does not care about balance.

For most developers, having a unit that is almost indestructible in certain situations would seem like a game breaking imbalance that must be corrected, but to a historical game it is merely the result of including the Greek Phalanx in the unit roster. If the enemy can be funneled into one space blocked by a Greek Phalanx then they will almost certainly be defeated regardless of numbers, and would need to find a way to attack the phalanx from behind in order to avoid massive losses, as was the case at the Battle of Thermopylae where 10,000 Greeks held back the entire Persian military (which was at least 200,000 soldiers in size) for 3 days until they were outflanked. Working such massive advantages into the game (but keeping them player dependent) avoids the rock paper scissors problem entirely by introducing a guaranteed victory option, as long as the situation that creates that guarantee is maintained. It places the emphasis on manipulation of the battlefield rather than purely the makeup of one’s forces. 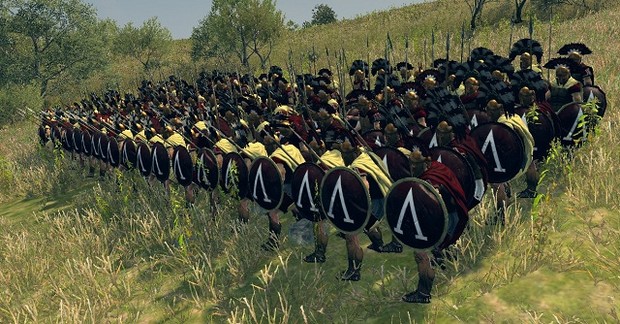 Unfortunately, working such possibilities into sci-fi strategy is a lot harder, as it must be purely the result of the developer’s imagination – which will also be focused diligently on balancing the game, hence the rock paper scissors problem.

Most sci-fi RTS games get around the problem in the same way the Greek Phalanx does: by making certain units into death incarnate in certain tactical circumstances. Case in point: Star Wars: Empire At War: Forces of Corruption – an RTS with so-so ground combat, great space combat and way, way too many colons in its title.

In SW:EAW:FOC the bomber squadrons are your friend, paired with a couple of cruisers to clear a path they can knock out the shield generators, engines and then guns of enemy ships before your own capital ships are even in range. As long as enemy fighters and anti-fighter ships are destroyed (or at least kept busy elsewhere) then the bomber becomes the do-anything unit to have, as capital ships and cruisers lack the accuracy to deal with them. Once the player crafts that situation then they can sit back and admire their handiwork as the enemy is swiftly destroyed, rather than stare at some Kodiaks going at it for 20 minutes.

But that can only apply to the battlefield – what about RTS games where there are no battles? Just a cutscene like in Galactic Civilization III. Well, that’s where the issue becomes much harder – and much more obvious as the player goes ‘oh, if only I had more of this type of weapon’ or ‘it’s a good thing I brought so many laser-bombs-of-megadeath!’ It is very easy to place too much emphasis on the specifics of weapons, rather than the combined power of a mixed selection.

There are, however, a couple of ways around the problem in space ‘em up strategy.

The first is to give each tactical asset (weapons hardpoint, ship etc.) many strengths and many weaknesses. For instance, in SW:EAW:FOC each unit has other units catagorised into ‘weak against’ and ‘strong against’. Star Destroyers can take on cruisers, frigates and corvettes but is weak to fighters and bombers, or even nimble corvette class ships. But the Nebulon-b (that ship that the rebels were on at the end of Episode V) is strong against other frigates and corvettes, but would get killed easily by bombers, a swarm of fighters, or a Victory Star Destroyer (the littler ones that chase Han above Tatooine in IV) – many strengths and many weaknesses make the combat a lot more diverse, and although rock paper scissors still exists there are, rather than one cosmic round going on and on and on for all eternity, many different games at many different times at many different places – this is much more effective where the player is involved, but still works well to keep things interesting even when all the player did was build the ships.

The second way is to give some units a sole purpose, and have them excel at it. A good example of this is the missile cruiser in Sins (it is the only good example in Sins, but still). It cannot engage any ships, only structures and planets. It’s missiles pack a larger punch than any other standard weapon against buildings, and If you wanted to smash up a planet; they are the ships to have. Their inclusion offers little tactical advantage in a ship to ship fight and so they cannot play rock paper scissors. Problem solved – though if every ship had only one purpose then it’d be about as dynamic as a sleeping snail. 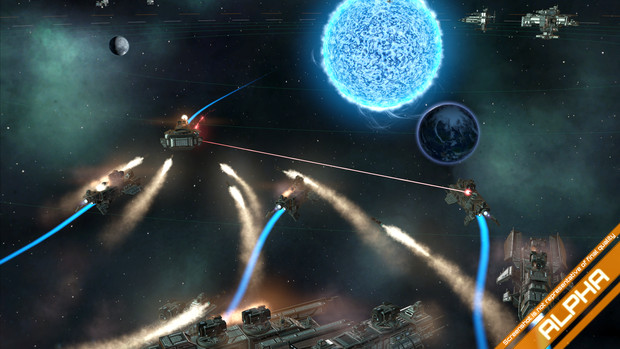 So Paradox – I’m talking to you. Do not play rock paper scissors at any point in the development process of Stellaris. That game looks like the best thing to come out of RTS in the history of laserbeams – at least according to Rock Paper Shotgun, who I both trust and is responsible for me accidentally writing ‘shotgun’ instead of 'scissors' 7 times in writing this – though I must warn you that it is a preview. If it’s all it’s made out to be, then take my money but please, please avoid reducing something of such wonderful potential down to a tedious game of rock, paper, scissors. That would be a great shame indeed.