By popular demand (2 people counts, right?), I have made my brief overview of Shantae: Half-Genie Hero's Costume Mode DLC into a CBlog. I'm not much of a writer, so bear with me here!

If I were to liken this DLC to something, it'd be the Metaknight modes in Kirby games: Similar to the main quest, but with a mostly-new moveset and some changed content. To be a bit more specific, though: 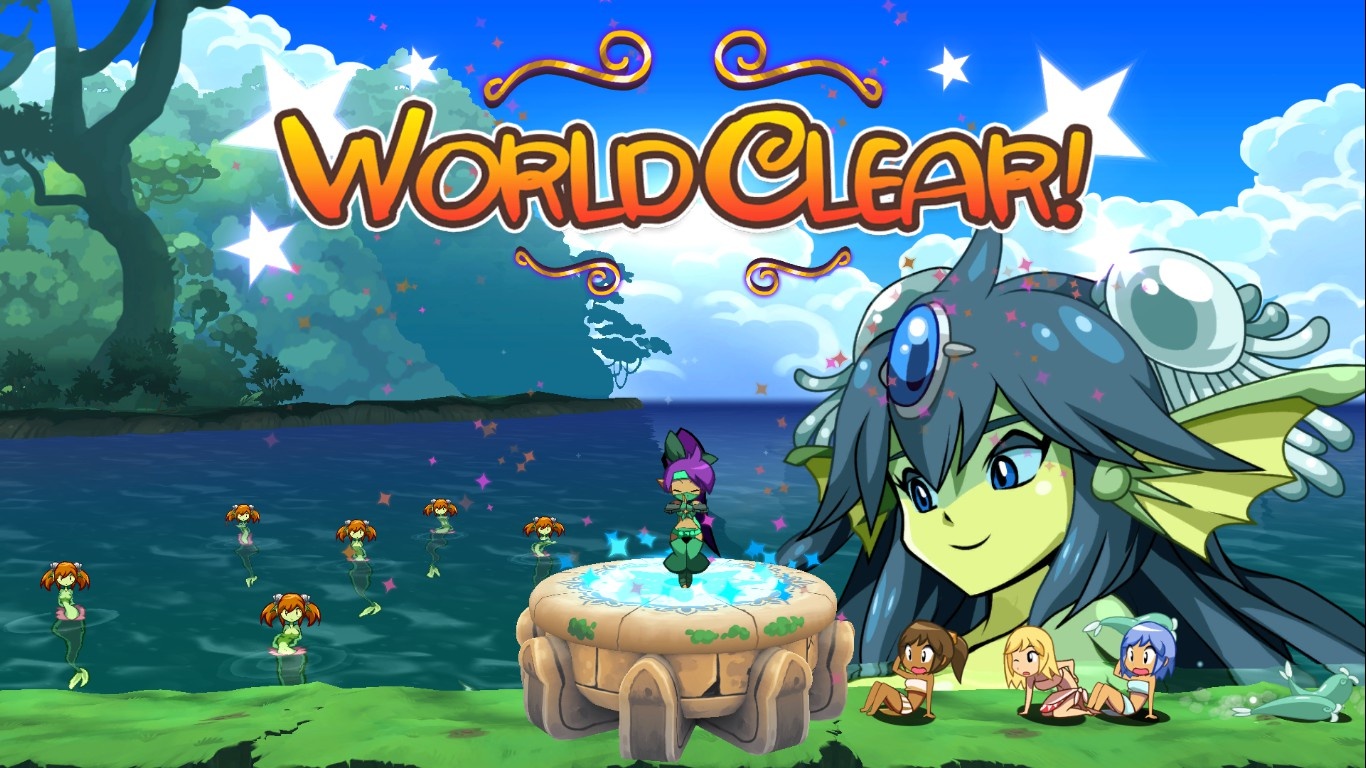 The most normal Shantae-like mode. Shantae orders a ninja suit (despite not knowing what one is) and tries to become the greatest Ninja. Cue faster Naruto runs and Ninja stuff. The levels are pretty similar to the originals, but with more enemies and some changes suited to her abilities. 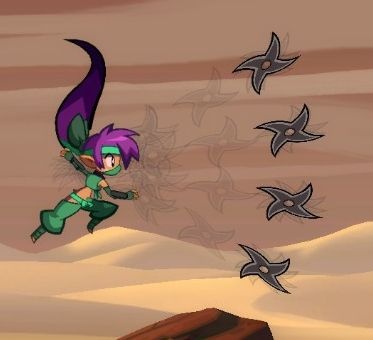 She has a katana that's basically her hair whip, kunai/shuriken that are weaker, but pass through multiple enemies, a Vanish, and a Wall Jump. 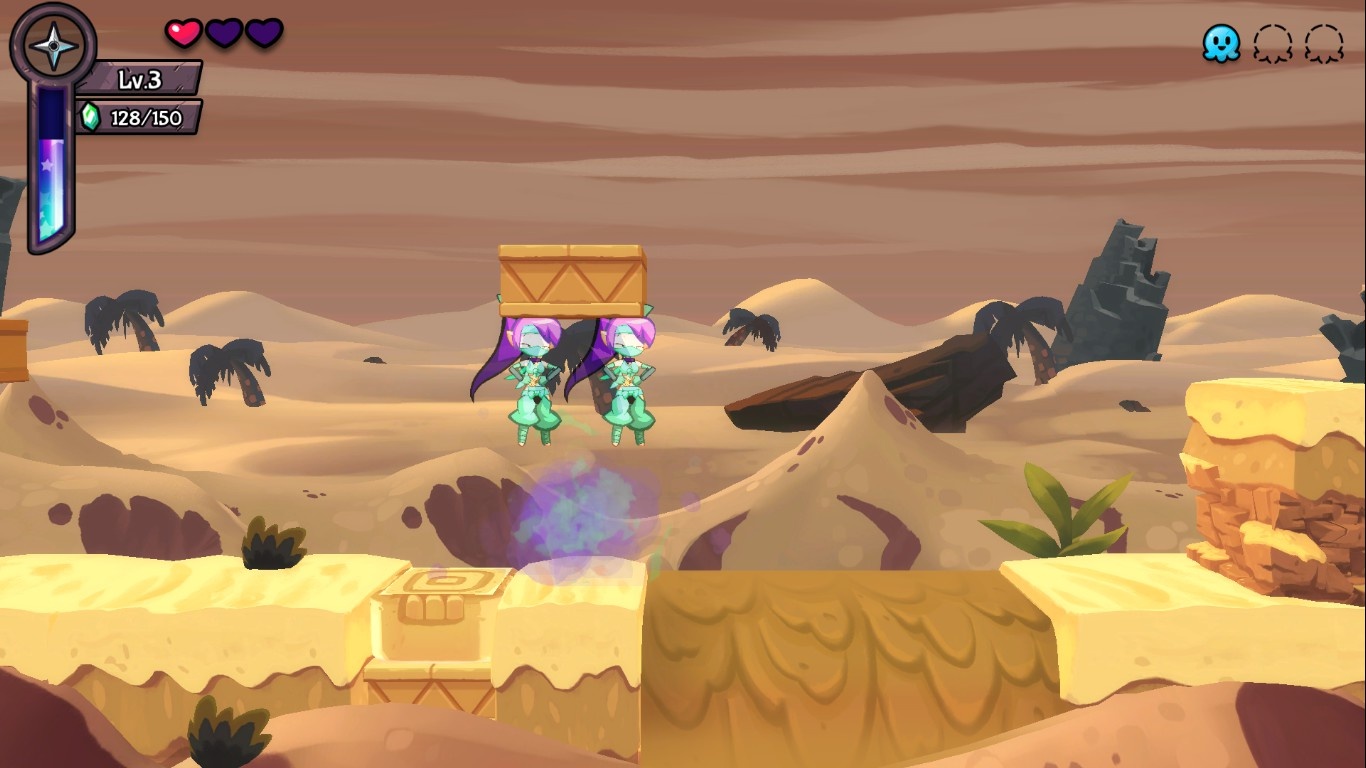 The Vanish is basically like Shiek from Smash, minus the attack. She can go a small distance, and it helps her get around. She can't go through solid platforms (the kind you can't jump down from), though. 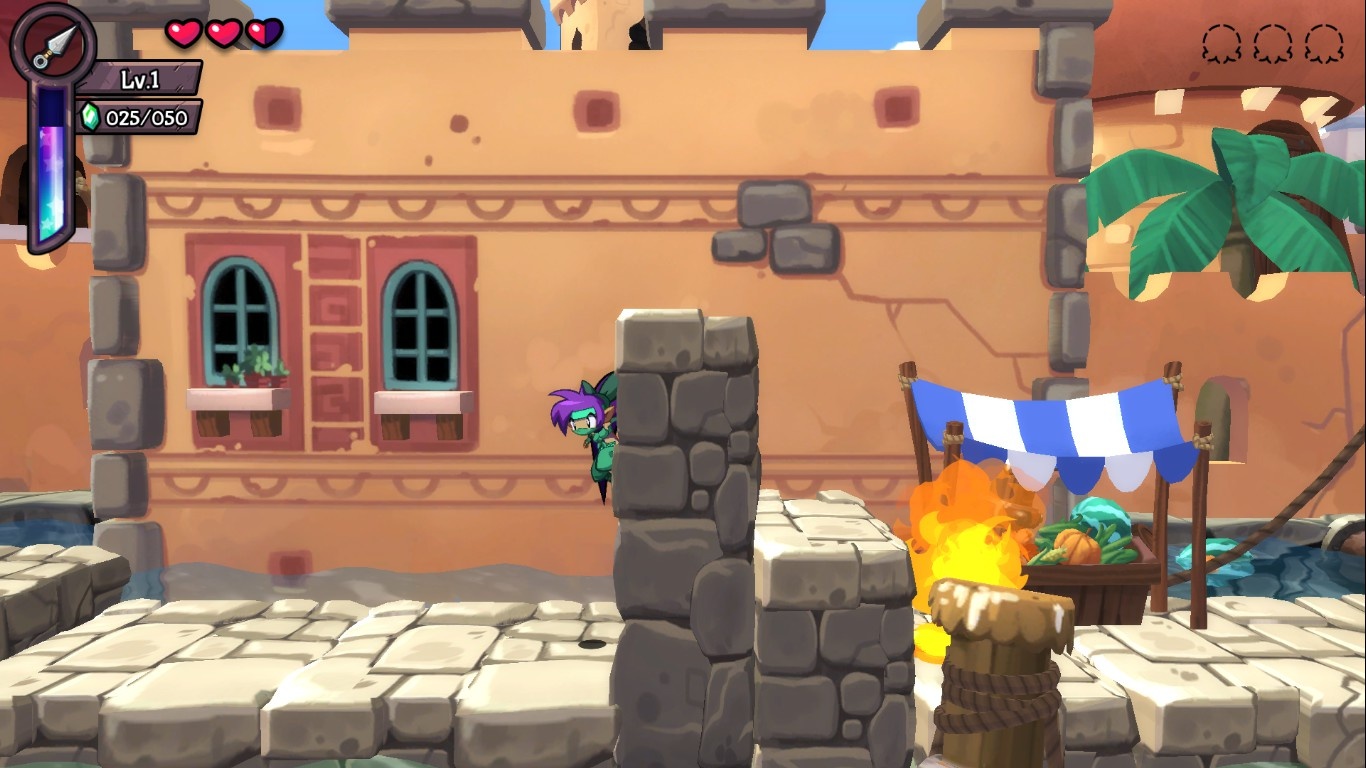 Wall Jump is actually pretty useful. You hold towards the wall and keep jumping up. You can bypass a bit of the levels with this, but it's not totally gamebreaking.

You can improve the katana and kunai by collecting gems, and you drop some when you get hit. Speaking of getting hit, try not to do that - Ninja Shantae takes quite a bit more damage. Not Hard Mode levels, but enough to where she can't survive more than a few attacks. 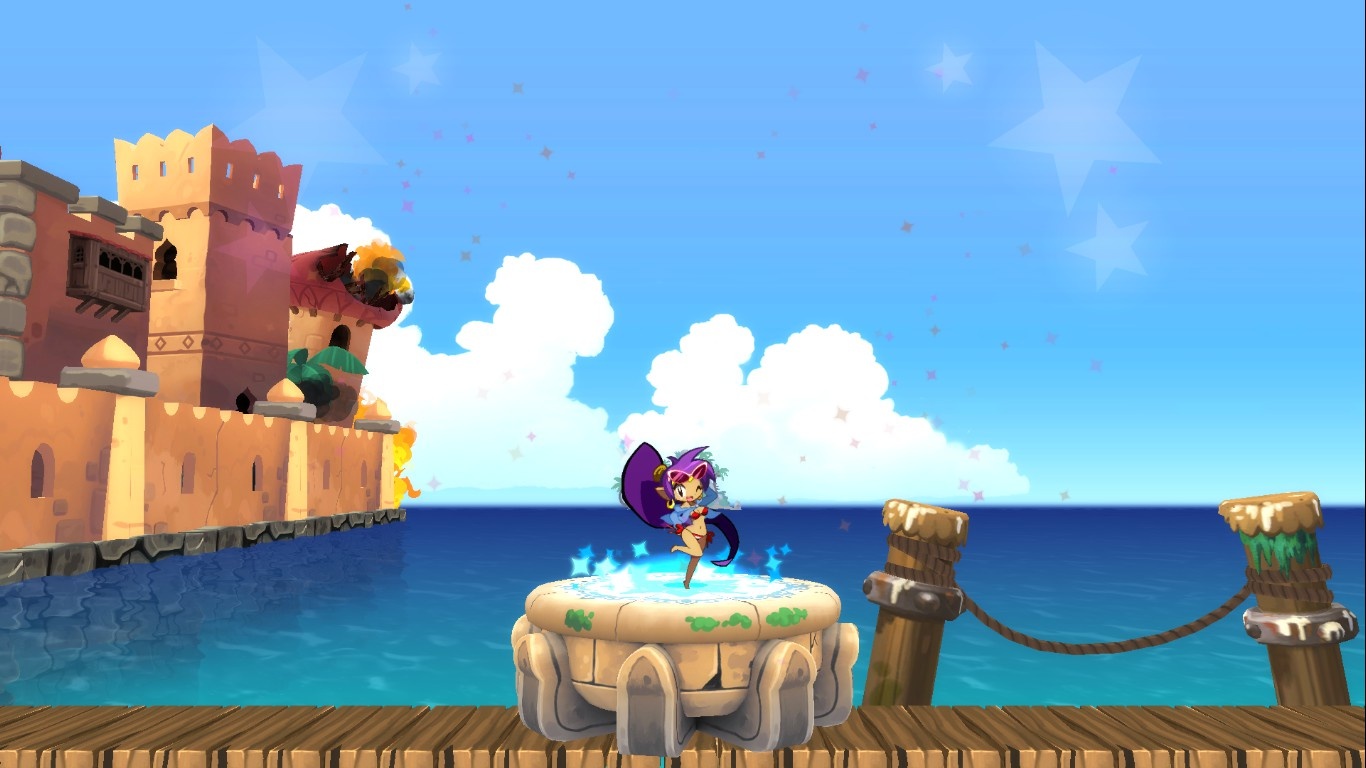 Similar to Ninja in some ways, but different. This Shantae is hitting the beach! I'm sure this will be the mode to inspire the most fanart, and Wayforward is well aware of this: 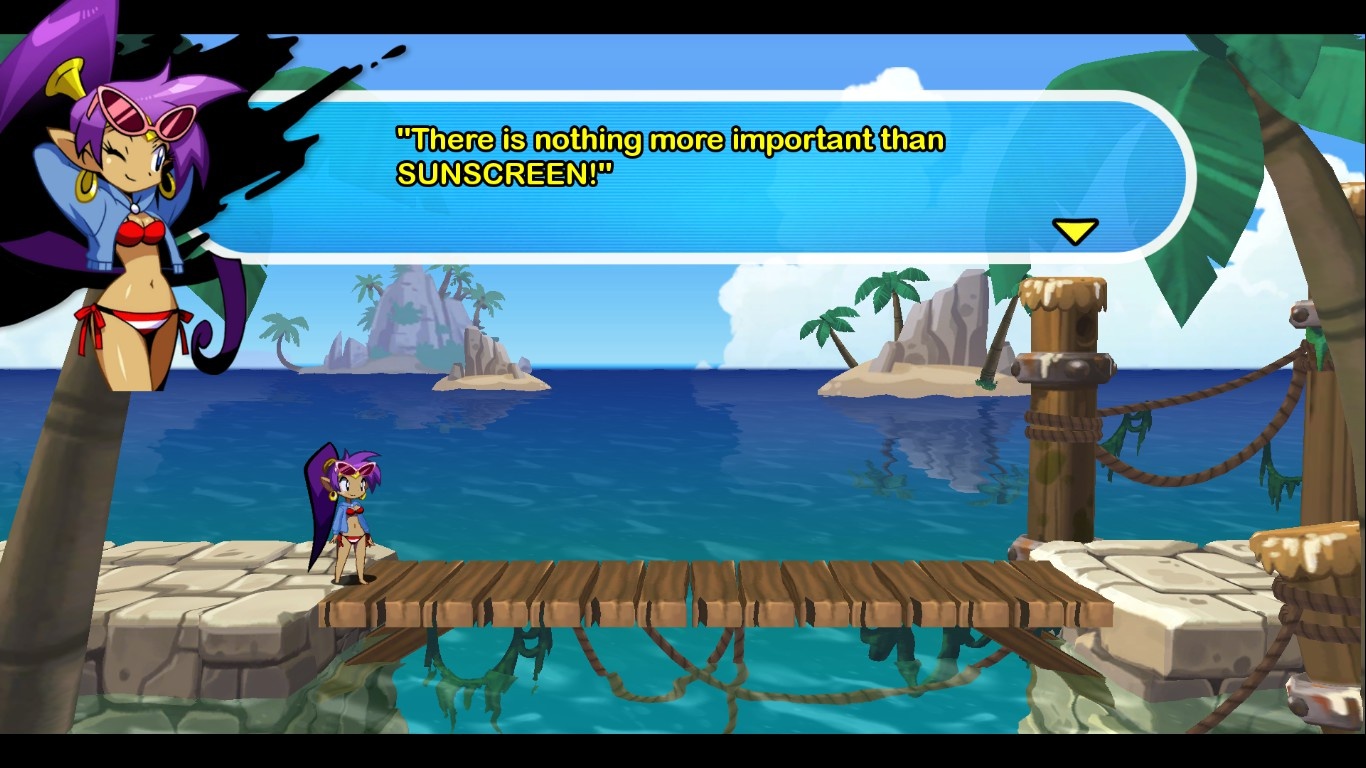 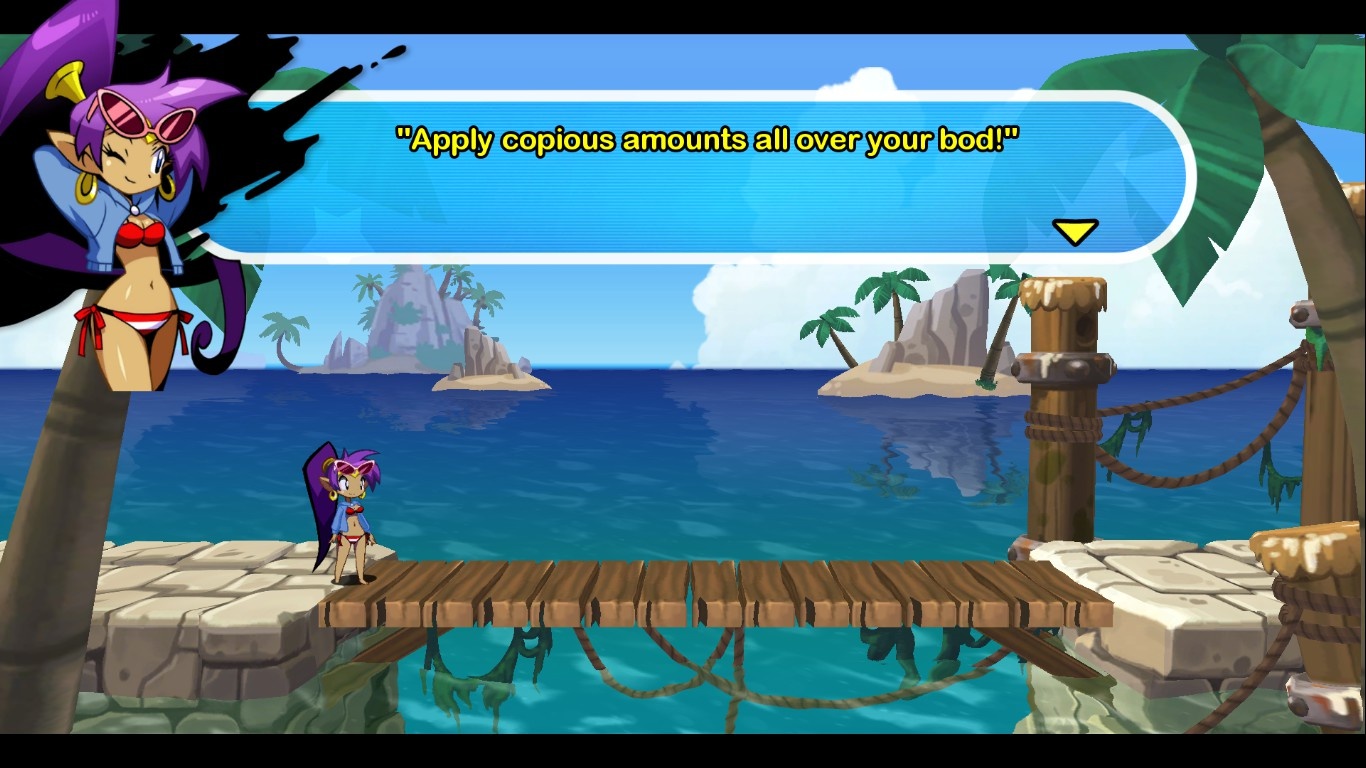 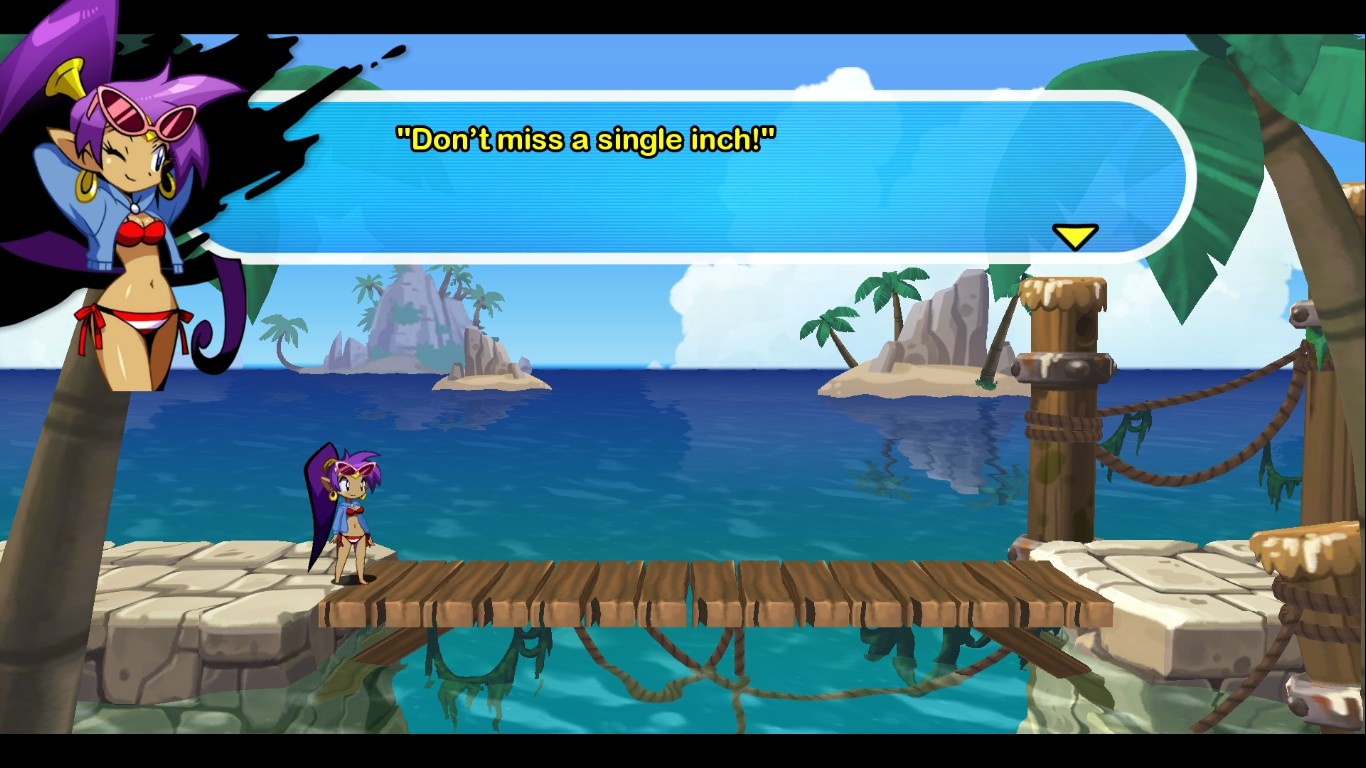 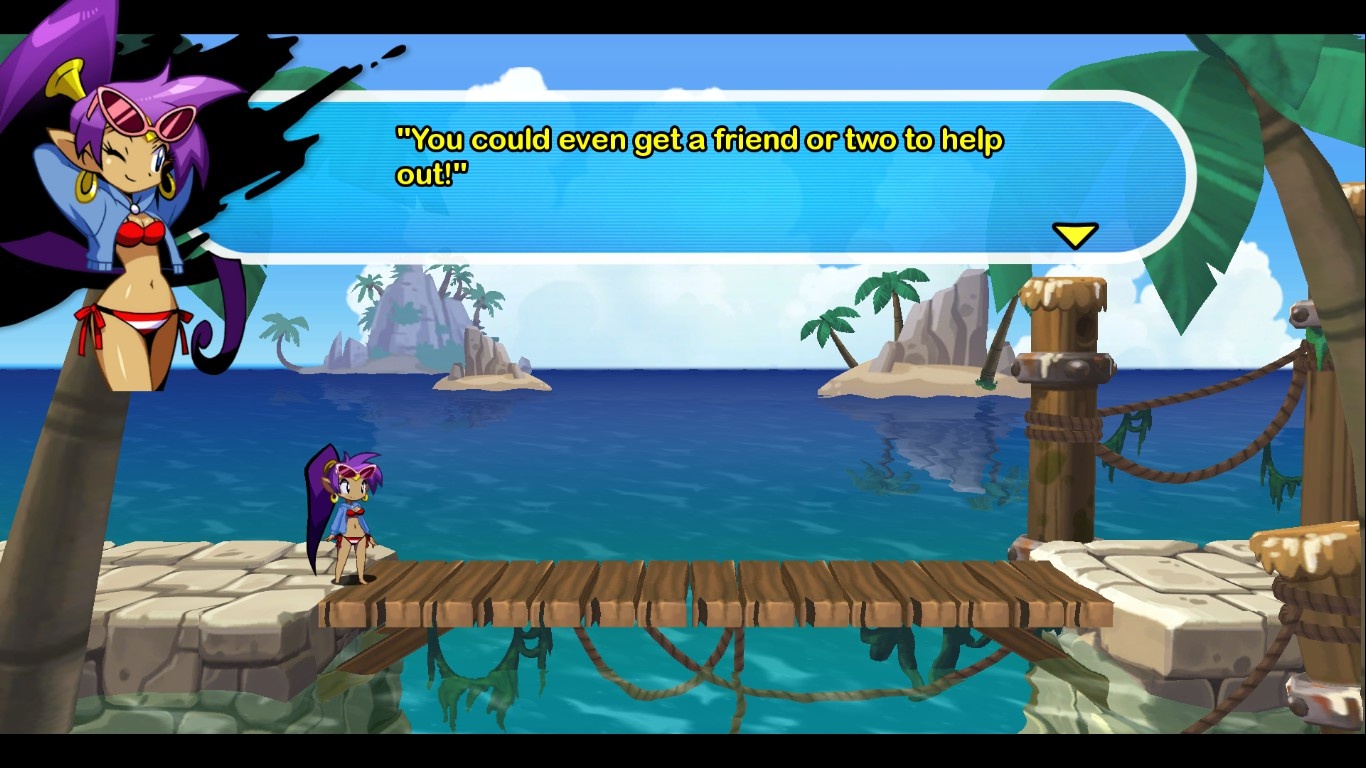 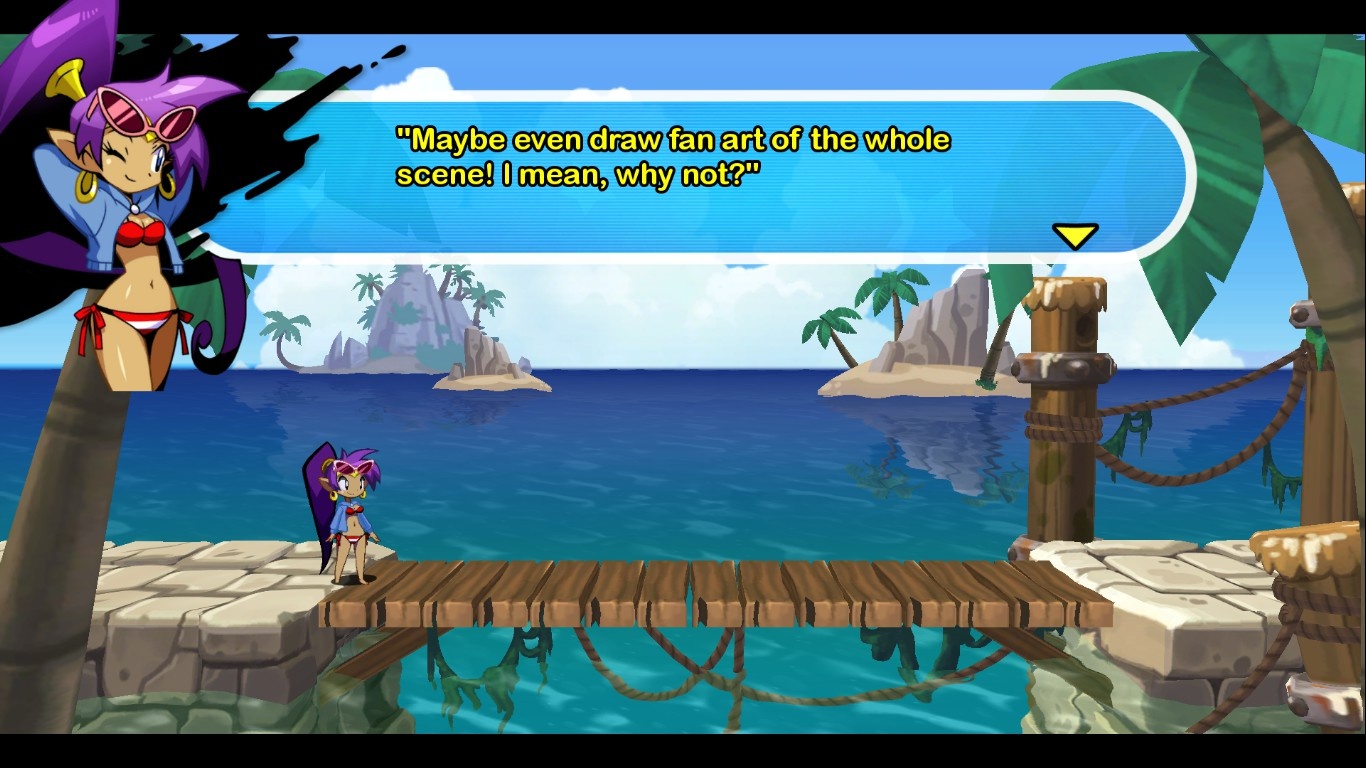 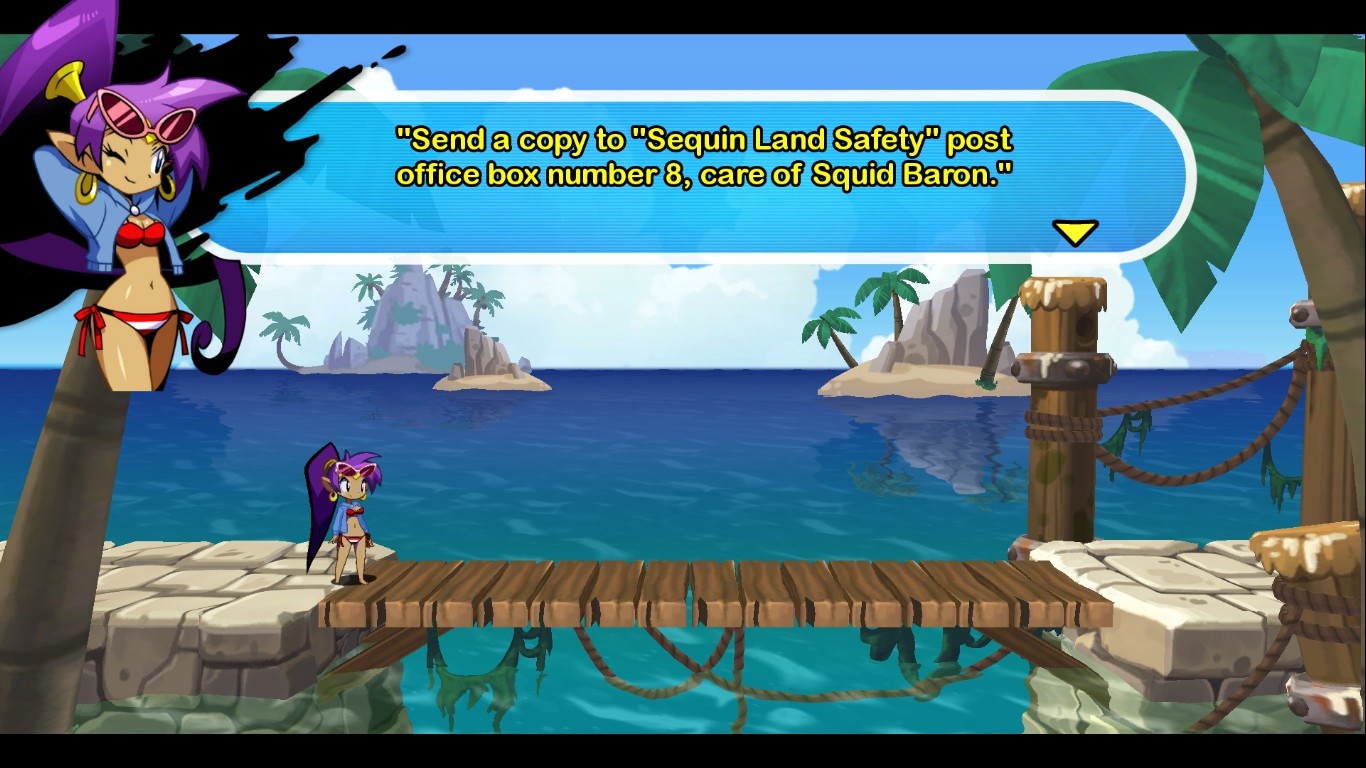 Anyway, Shantae has her normal hair whip, a beach ball projectile that bounces around the screen a few times (it's good for hitting enemies at odd angles), and a bubble move that lets her float up for a while. 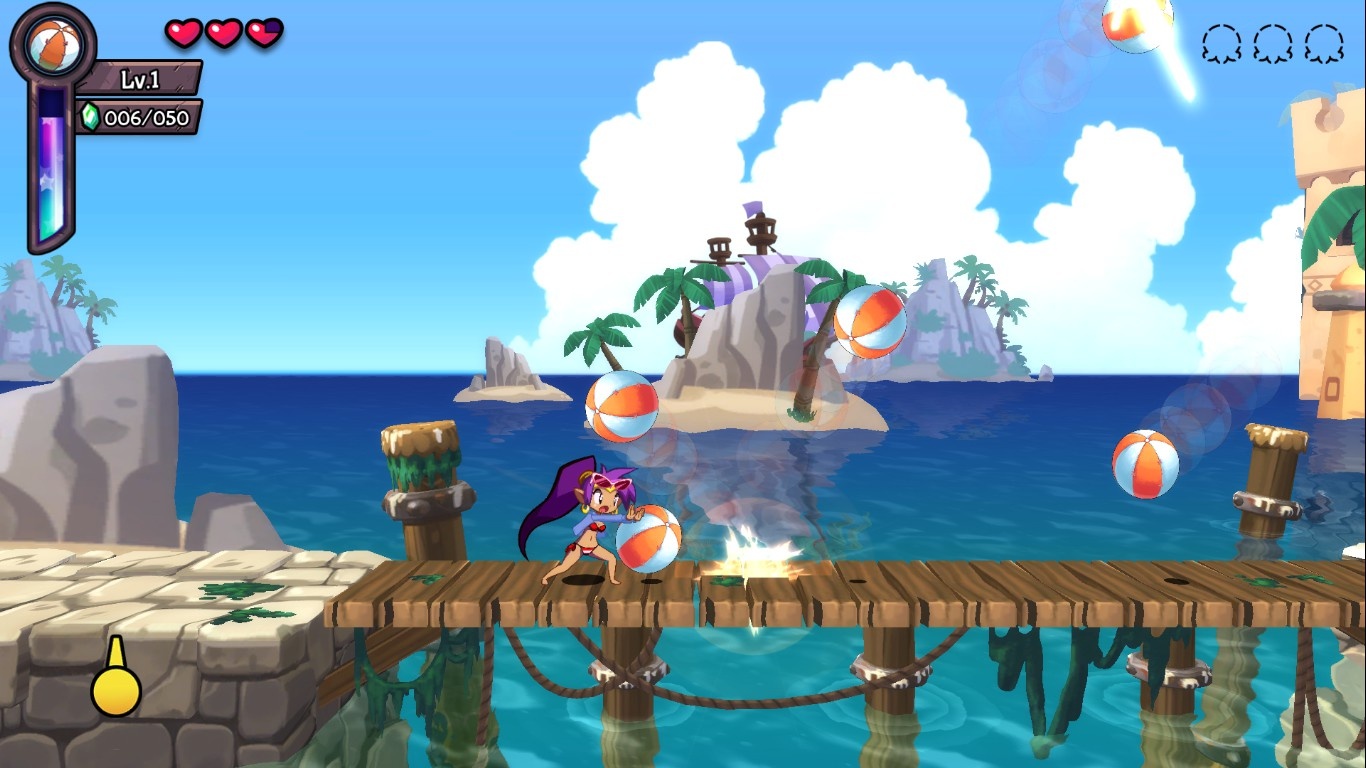 The beach ball has a small trajectory in front of Shantae, but gets most of its use from said bouncing. You can keep throwing more and more balls the more she levels up, so you can have a ton of them flying around at once. 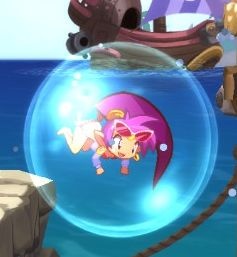 The bubble is basically just for going up, and doesn't go fast enough to be good for avoiding things.

She swims crazy-fast, too! 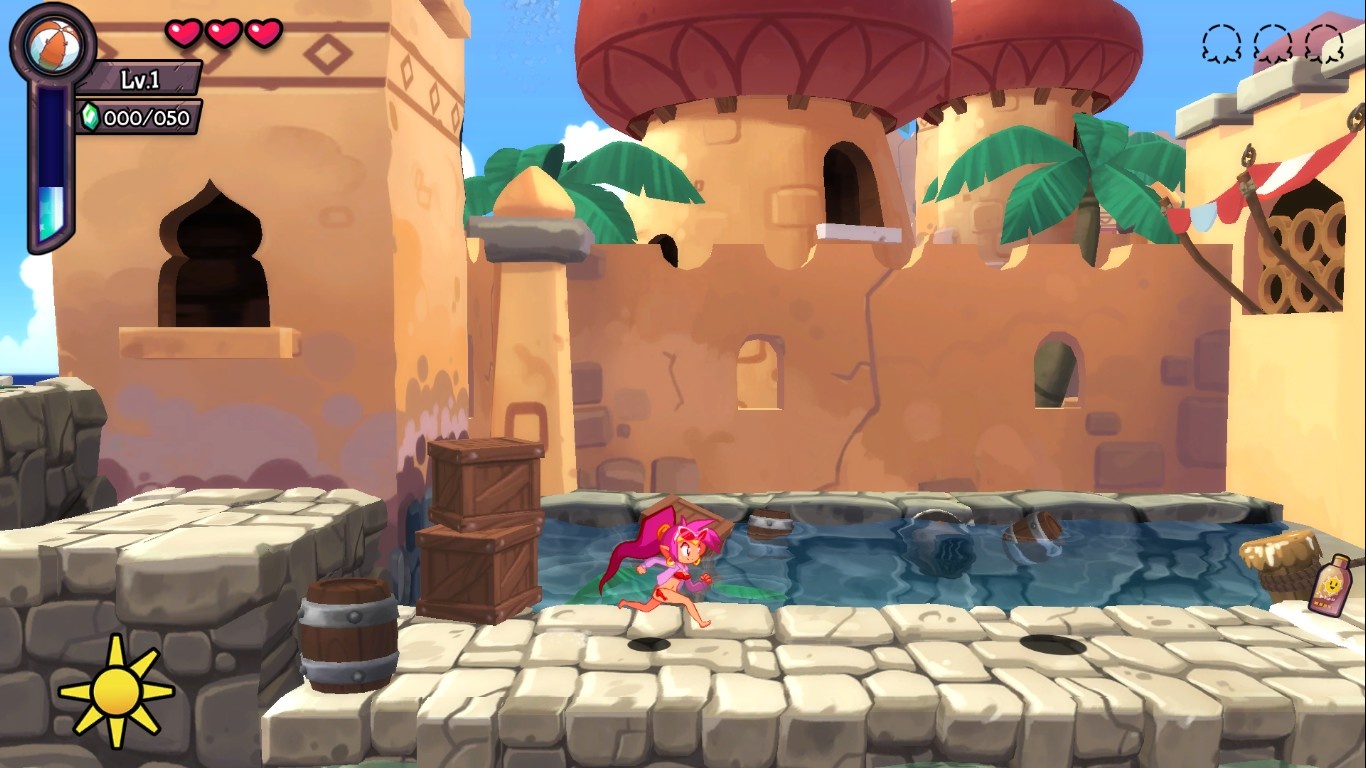 As Shantae keeps going through the level, a sun icon will start to form in the bottom left corner. Get a full sun, and she will get sunburned, causing her to lose damage over time. Add enemy attacks to that and it's easy for her to die. Think of her like Ray from Mighty No 9 Gunvolt - she's meant to be tougher to play as! A good strategy is to just keep going (Way)forward, dodging as many attacks as you can!

Collecting the Dream Squids scattered throughout the levels can unlock beach-themed win screens at the end. Good luck! 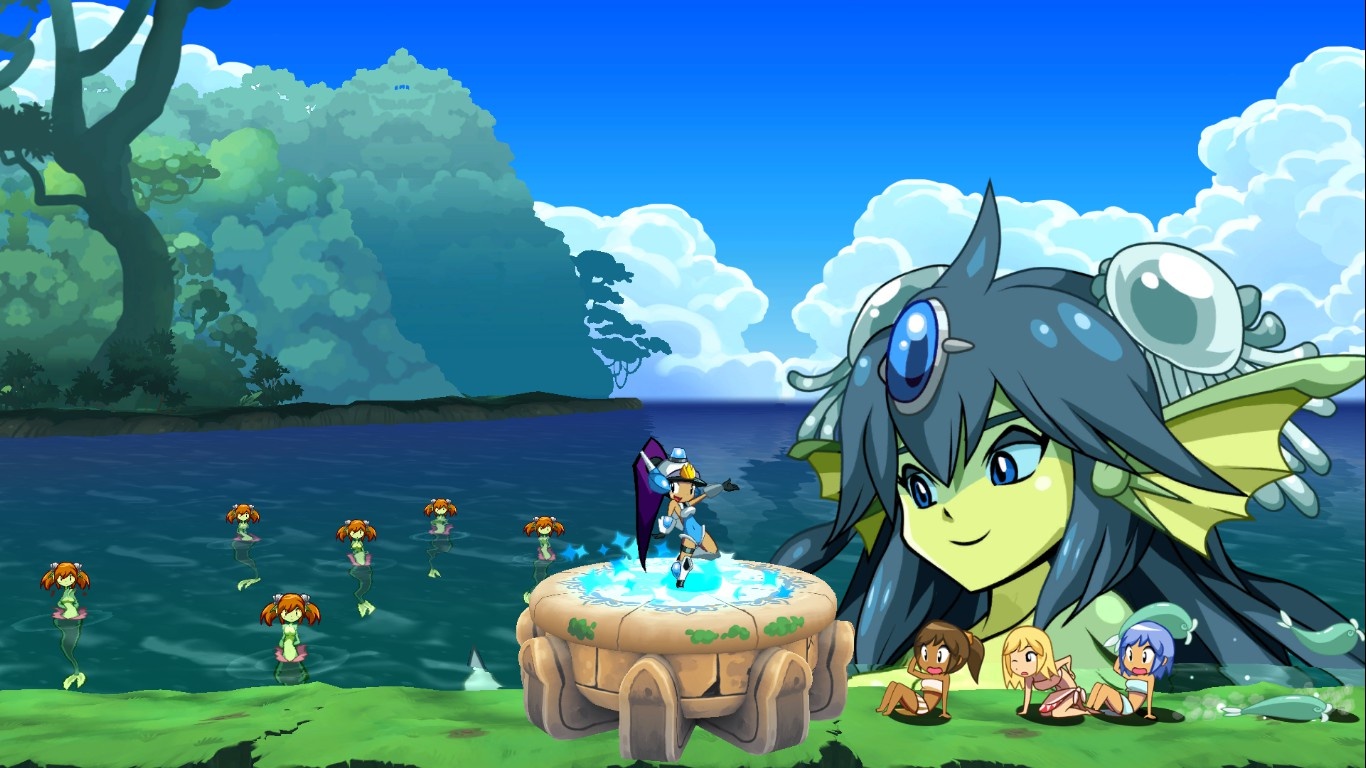 By far the best of the three and worth the price of admission (whatever that'll be). Shantae replaces Patricia Wagon and goes on a mission to capture the Hooligan Sisters (played by various Shantae girls) and save the galaxy! 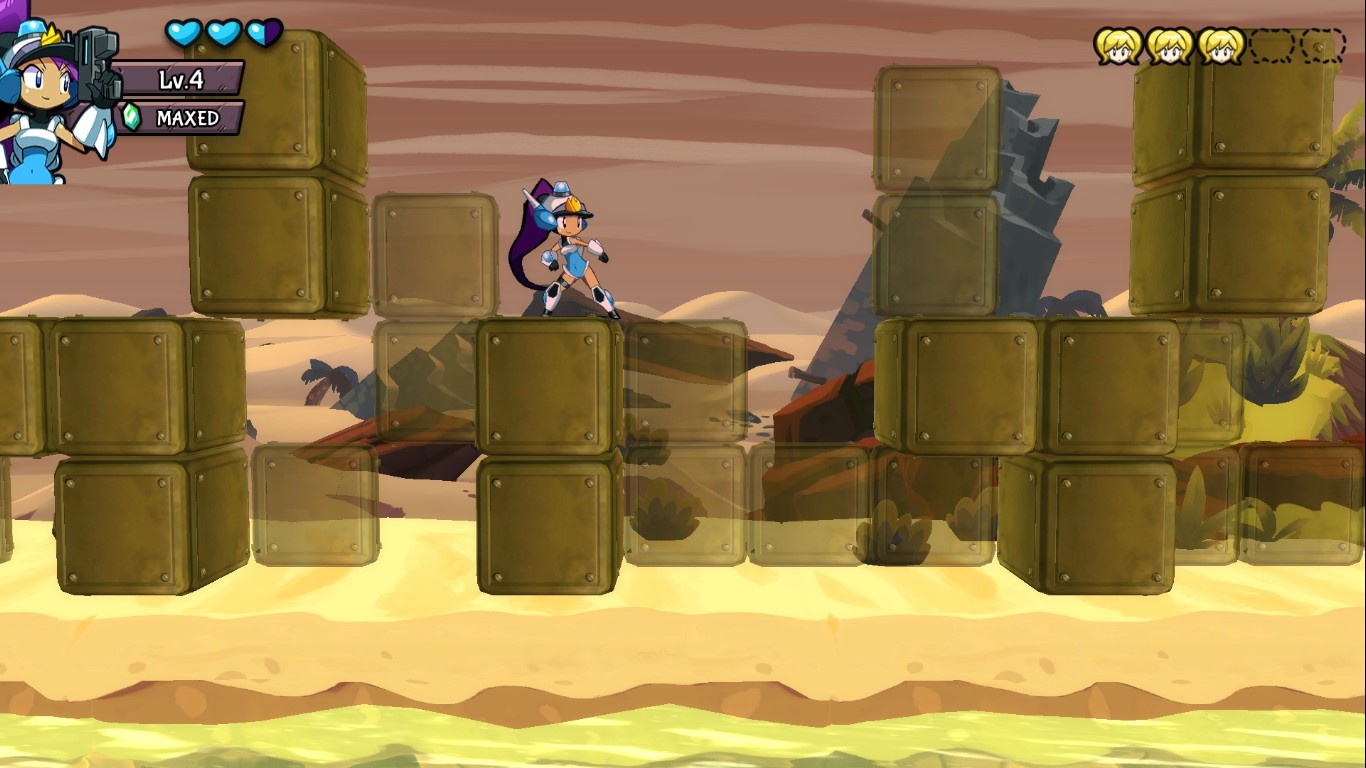 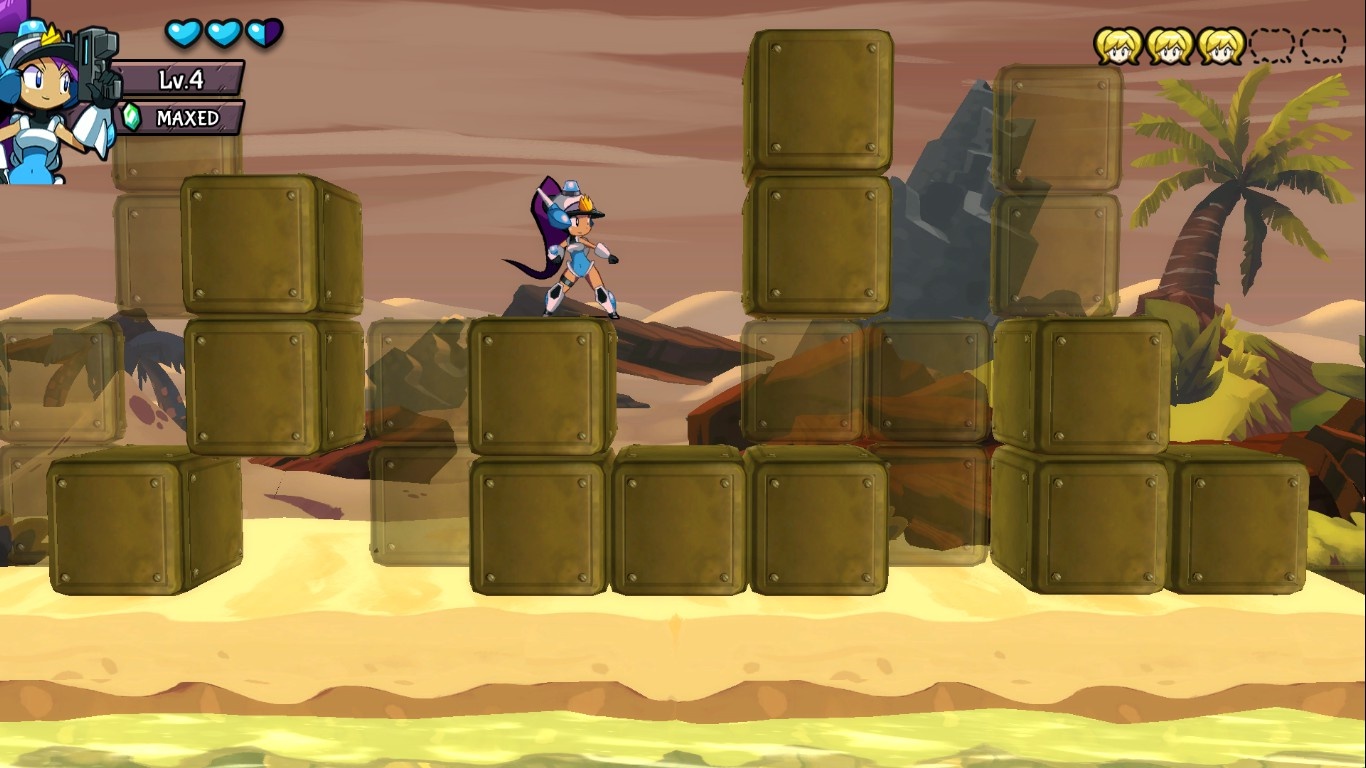 The levels are a bit different, with blocks scattered around everywhere. Much like the Mighty Switch Force series Officer Shantae will have to keep switching the blocks to not only get around but defeat enemies as well. The blocks also make for convenient defensive cover against projectiles. 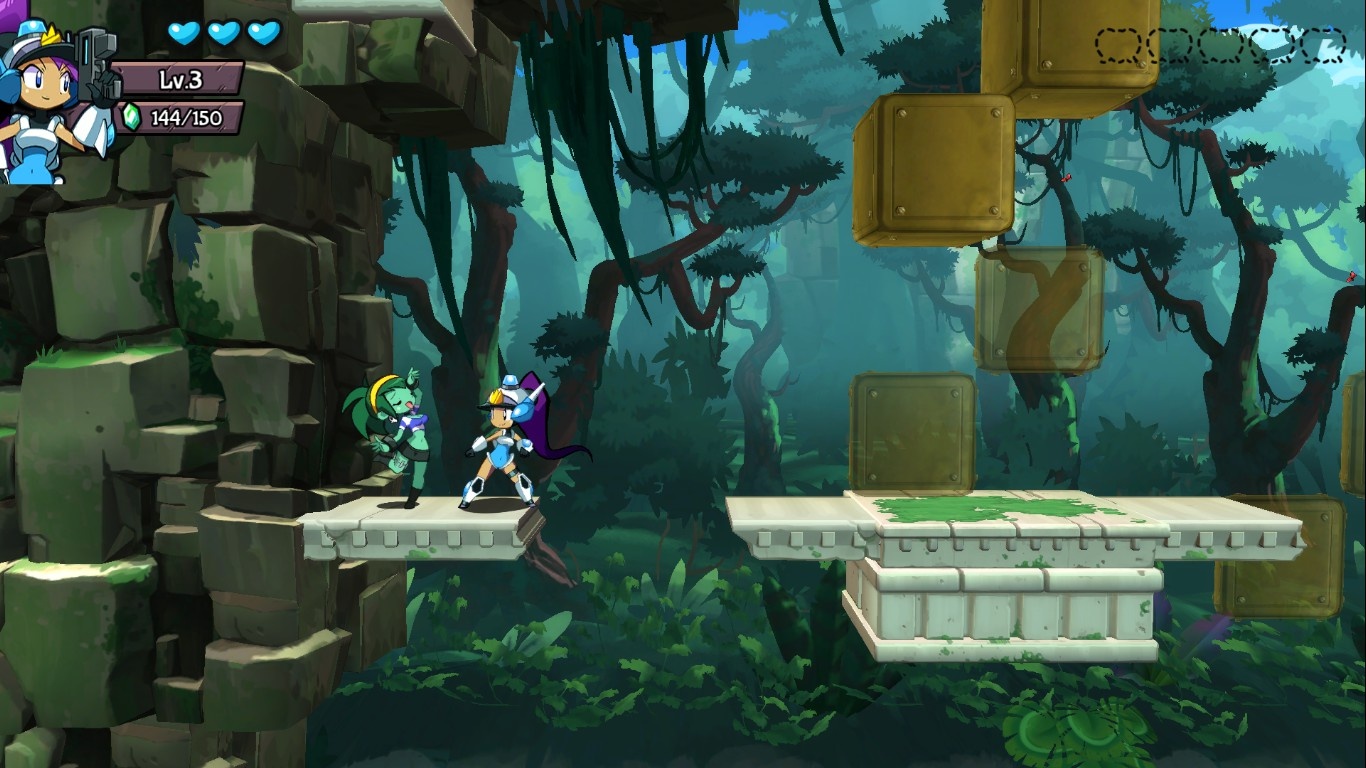 For those not in the know, the Mighty Switch Force series is a cross between Megaman, a puzzle game, and hide-and-seek. You go through each stage of the level, finding 5 Hooligan Sisters hidden throughout and getting to the end. You must also avoid being too close to blocks when switching, otherwise you'll get crushed!

Here it's not required to get every Sister to complete a stage, but doing so with fast times unlocks different win screens post-game, just like the main series. 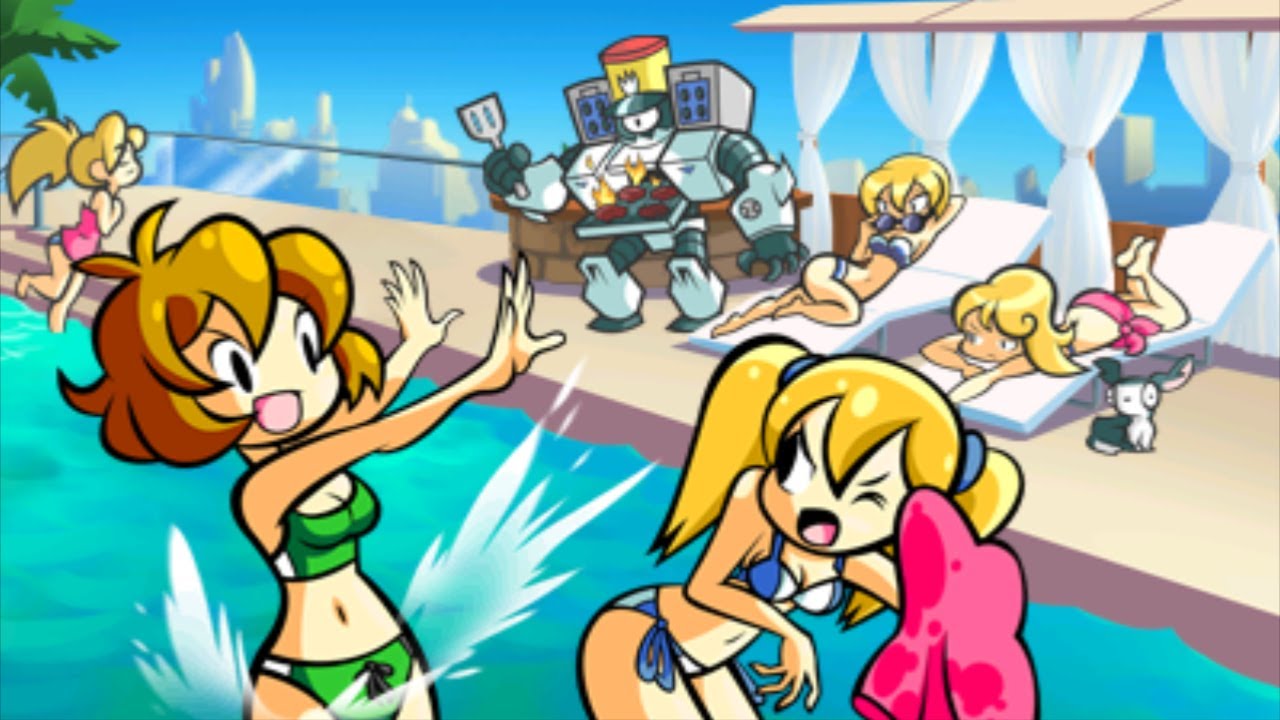 The Boss battles are changed slightly through the placement of the blocks. Against Risky Boots, for example, it's a bit harder to move up because of the block arrangement. On the other hand, having the right blocks switched on will block some of her bullets from reaching you.

Your gun can be upgraded with gems to fire larger shots and in multiple directions. Officer Shantae can't crouch, so those higher levels are great for reaching enemies at a specific angle or down stairs. Another weakness of hers is water; she can't swim! This makes using the blocks important for getting around safely, especially in the 2nd level.

An awesome bonus is that they used music from the actual Mighty Switch Force games in the levels! The other two modes don't change the main music in any way, aside from in the opening cutscene.

With all this, you're essentially playing Mighty Switch Force 3. I'd love for Wayforward to revisit the series again someday, but this is close enough for now.
____________

So yeah, those are my thoughts after playing for about two hours or so. While not TOTALLY game-changing, I think this is a neat addition to the game, and worth it for Officer Mode alone. Ninja has a bit of challenge and a different moveset, and Beach Mode is good for those who like a lot of challenge.

It's coming out on April 10th, and is definitely worth a try!