What’s this? A Cblog from Gus?

Yes, I know. An extremely rare cblog from me. Love it. Embrace it. FEEL IT. COME ALONG THE FEELS JOURNEY.

The reason for this blog today is talk to you about your first real video game. That one game that got you started down the path of immersion. It had to start somewhere, unless you just manifested your love for video games. I don’t judge. Lemme regal you with my story.

Growing up my family had your normal staple of the NES with Mario, a few other games, and that Moses game. I don’t remember where that came from, but uh it was fun.

Anyways, there are two games that really stand out to me. The first one being Nascar 95. I am pretty sure it came with our computer. It was wonderful to that fire up and hear “NASCAR RACING BY PAPYRUS.” The Excitement. The Thrill! Ah, those memories are just flooding back. I’d race normally for a few minutes or so, but that got boring. I would then, obviously, turn off damage for myself and proceed to drive the opposite and absolutely annihilate the competition leading to an easy victory. Cause where’s the fun in racing “nobly?” Lame.

LOOK AT THOSE REALISTIC GRAPHICS FOR 1994.

Many hours I spent playing that game till my young fingers hurt from pressing those arrow keys. Victory after victory, championship after championship I would rack up with my completely legal strategy. I honestly don’t know why Nascar drivers do this today. It’s makes winning so much easier. Then one day something broke on the PC and naturally dad blames it on the game. I shed many tears with the deletion of that game. Spoiler alert, the computer was still messed up and IT WAS NOT MY FAULT. I have many fonds memories of that game. Playing it when I should have been outside frolicking in the meadows with other kids my age and making lasting bonds and whatnot.

(Not pictured, but I am definitely frolicking through that meadow.)

The other game that really sealed the deal was Halo: Combat Evolved. I first played it at my friend’s house. I loved the gameplay, the violence, er uh graphics. I would play multiplayer with him and his buddy and get absolutely demolished, cause I was young and dumb and didn’t understand tactics, different weapons, map layouts, and screen looking. 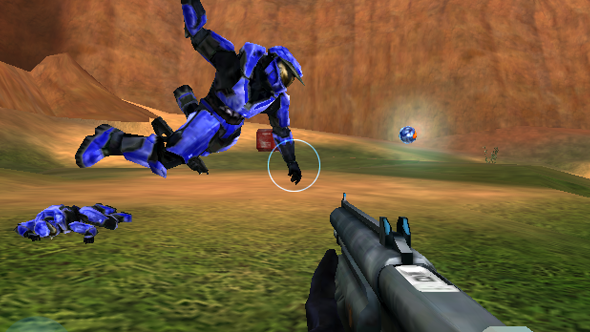 (THE OG SHOTGUN SAYS "SCREW YOU FROM THE OTHER SIDE OF THE MAP.)

It didn’t matter that I might have gotten one kill out of, I dunno, 50, it was fun. I had fun. After many many weeks of chores scrimping and saving, I finally could buy my own very own Xbox.

(The DUKE was the best controller and I wanted an excuse to include these fantastic ergonomic controllers. I don't want to hear anything different about these most epic controllers of all time and deserve their very own spot in the Hall of Fame of Epicness. Also, I love the boxiness of the OG Xbox.)

My fondest memories of Halo were playing co-op with my brother. We’d slaughter countless Covenant with wonton abandonment. Cackle with glee as the grunts fell beneath our withering fire; recoil in revulsion as we had to fight through the aptly named Flood on the most hated level: The Library; laugh together as Cortana’s succinct “Oh Hell” on the Maw when the stupid monitor butted in, finally, endlessly kill each other cause we were bored until the room we were in was filled to the brim with dead Master Chief’s cause we were bored.