Konami's Nemesis is arguably one of the most popular game series on MSX. For Santiago Ontañón's The Menace from Triton (2020), that is also a key inspiration. The author has also stated that Steredenn (Pixelnest Studio, 2015) and Z-Exemplar (Suminell Studios, 2016) were inspiration for this game. 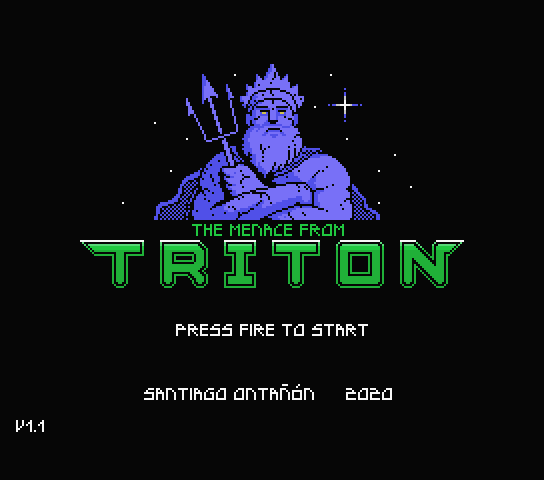 The scene for the game is simple. The Empire of Triton has decided to thwart the humanity's efforts to rule the galaxy and has attacked them. Now the player has to go and defeat the empire. That's about all the player has to know about the plot.

Triton is played on two different levels: primarily on horizontally-scrolling shmup levels and to much lesser extent on galaxy "world map". 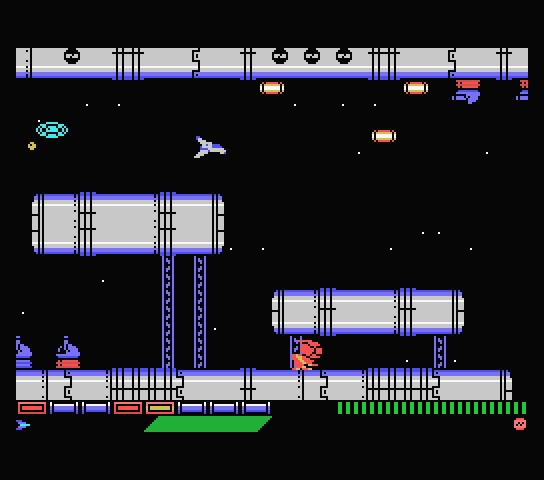 The machine/space ship "biome" in an early level. The blue vertical support beams cannot be flown through.

The powerup system can be said to expand on what Nemesis had: the player collects powerup capsules to change which powerup is highlighted and can then "purchase" it. However -- these apply only to that level, and the last powerup actually buys the player credits. Between levels, these credits can then be used to expand the powerup bar with more options and higher max level of weapons. 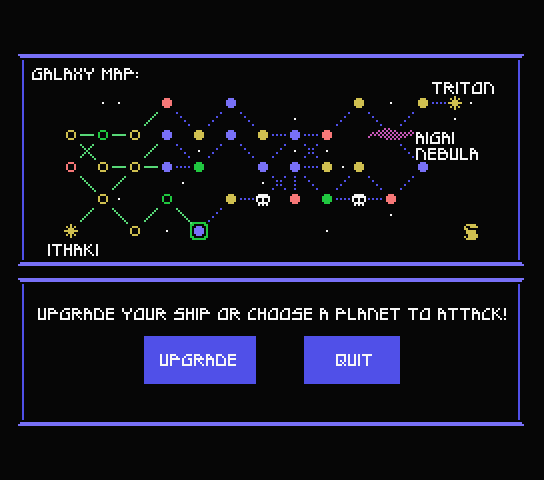 Galaxy map; the player has to make their way to the three marked bosses and then to the nebula. Not all levels need to be finished. 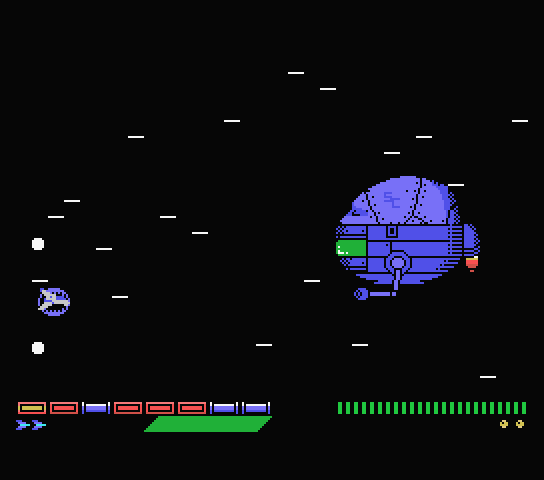 Facing the second boss, Scylla, with a ship armed to the teeth. The white stripes are just stars passing by, not bullets.

This is not to say the RNG cannot be unfavourable. Some enemy waves approach from the back, which may corner the player's ship in a bad spot together with the level geometry. The latter is also a source of annoyance when the player has to fly down between pillars and there's a turret or two below, spraying bullets at the player.

The player will need to fight the same bosses in every run before being able to cross the Aigai nebula blocking the way to Triton. The difficulty also ramps up in the same way across runs; enemies can withstand more damage and shoot more bullets at the player the closer they get to Triton.

The developer has again worked around the limitations of MSX to give the game smooth scrolling. This means the levels are bland in terms of colour to avoid the colour clash. There are still some artefacts, but they're limited to the power capsules being dynamically placed.

Given the large number of bullets on screen at once, sprite flicker is unavoidable. The "option"-replacements here are positioned at fixed locations above and below the ship player's ship, probably in part to avoid even more sprites on the same scanline.

Outside the shmup parts, the graphics are good. My only complaints are that the item purchase screen feels too cluttered and the bosses lack some detail. 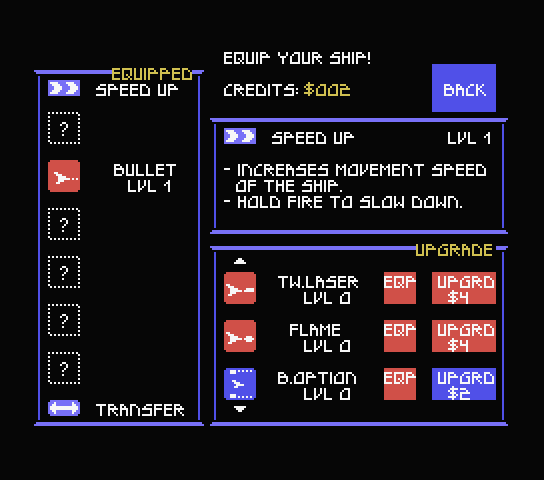 Shop screen at the start of the game.

The music pieces are rather short and simple, which is a shame. I'm not too sure about the sound effects either: it feels like a game of chance if hitting the boss in its weak spots elicits that signal.

Triton is hard. I had to use emulator save states to finally finish it. There are no alternative difficulty levels to choose from, so the end game will be brutal, and there's no RNG god to save the player.

There are some concessions to difficulty. While the game has a lives system, the lives only tell how many times the player can get hit in one level before having to restarting it. And when the player dies in-level, the player won't be moved backwards to a checkpoint and lose their powerups; only the number of collected powerup capsules is reset. And earning enough credits to make all the desired purchases isn't too hard either.

There is no scoring system in the game either, which is a bit strange for a shmup. This also means there's little reason to go after the typical big targets like Moai heads and laser snakes, since it's easier to just avoid their shots.

Overall, this is a feature-rich game that will provide a hard challenge to the players. It won the MSXdev'20, and understandably so. It looks great, plays well and is only too hard. In the end, that's not a big minus in my book.

The game's source code is available on github.

I've decided to do just write-ups on MSX hobbyist games for now, with the goal of covering one game per month. This was the first, I have not yet decided what the second would be.