Quick impressions on Evercade VS (and Evercade)

I caved in and got another gaming console: Evercade VS. Given that I play even Switch docked almost exclusively, I went for the non-handheld version, even if that meant not being able to play Namco's collections (they're blocked on the VS because of licensing reasons, I believe).

First things first -- I bought the systems and the games I have for it with my own money, and if I don't say otherwise, the opinions below are my own. There are already many reviews made by more competent people than I am, so I'll just point out my observations. 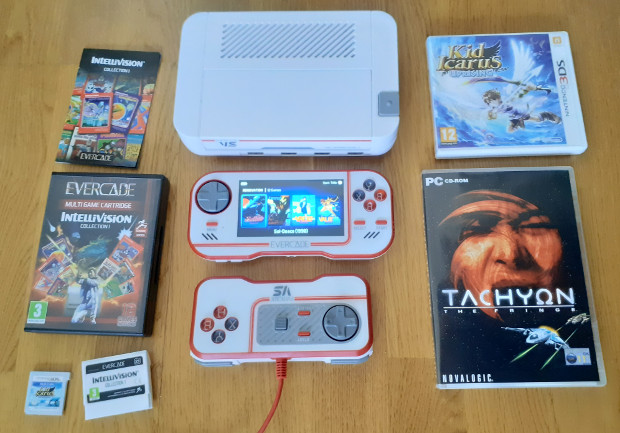 The premium pack came with the system, two controllers, a USB cord and two multigame cartridges: Technos Arcade I and Data East Arcade I. Something to note on the USB power required: it's 5V 1A, and the connector isn't USB-C but micro-B. I had to look for a different power supply since the one I had at hand was only 5V 0.7A.

The other sockets are 4 USB slots for controllers and HDMI out. Under the lid there are two slots for cartridges.

The power button is a bit unresponsive. Pressing down to hear a click and then letting it go isn't enough to turn on the system, but I need to hold it down for a while and then let it up.

The wired controller feels comfortable enough, except for the digital bumper buttons. For some reason they're as thin as the shoulder buttons and the bottom edge is on level with the shell, which makes them all too easy for me to miss -- not that I think I've ever played a game that would use those. The controller also feels light and flimsy, but I don't think my attempt to twist it in my hands made any more squeaky noises than I would've liked. Given the lack of internal battery and any kind of force feedback, the light weight is kind of expected.

Setting up the console was easy: enter the wifi password and let it upgrade the firmware. On one hand, being able to upgrade the firmware like this is easy. On the other, I'm not liking the way this is used to upload "game of the month" to Evercade VS. 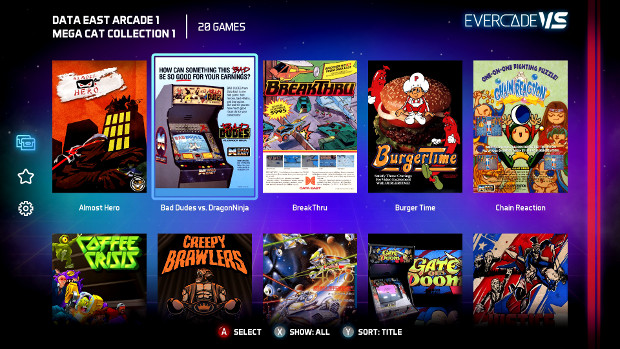 Menu on Evercade VS with two game cartridges inserted.

Since I was so taken by Evercade VS, I decided to get Evercade (the handheld) as well. In part also because I wanted to play the Namco games.

The handheld is a bit different beast to the Evercade VS. This is the "original" system; VS is a later release. It takes in only one cartridge at a time and has no built-in WiFi. To update the firmware (something not mentioned at all in the quick start guide), you need a Windows PC or a Mac, and update it via USB. The USB socket is also micro-USB as in Evercade VS. The starter guide mentions the charger should be 5V/0.5A, unlike for the Evercade VS.

This firmware upgrade process was far too fiddly, and I spent at least half an hour trying to get the upgrader program on PC to connect with the system.

The battery is not replaceable, at least not without taking out a screwdriver. I did not look at the insides for what kind of internal battery the system has, but maybe some other reviewers/users have.

At the moment of writing, the latest handheld firmware was 2.0.2, which I can see made a significant improvement in adding "pixel perfect" mode. In the firmware version my system arrived with the graphics shimmered annoyingly when scrolling.

I don't have a mini-HDMI-adapter, so I cannot test what the handheld looks and sounds like on TV. The system has also a headphone jack.

Of some relevance is that the Evercade does not have the bumper buttons (L2/R2) the VS controllers have. I do not know what this means going forward.

Something to note: Evercade uses cartridges, but they can also be patched by updating console firmware. I'm not sure if this process puts any data on the cartridge or if the patch data is present only on the console. For instance, I understand one cartridge had a demo of a game (because the full game wasn't ready by the time the game went to print), and a later firmware upgrade would update the game to its full form.

I did check that a Megadrive game had its save state and save game carried over between the handheld and the home system on the cartridge.

Another thing I've seen people often bring up are the printed manuals. Here's the thing -- they're less manuals and more booklets with one spread or less dedicated to one game. Typically this is one paragraph of background for the game and then one image describing the controls for the game. Do not mistake these for the detailed manuals in the 1980s and 1990s; these are more comparable to cassette game inlays. 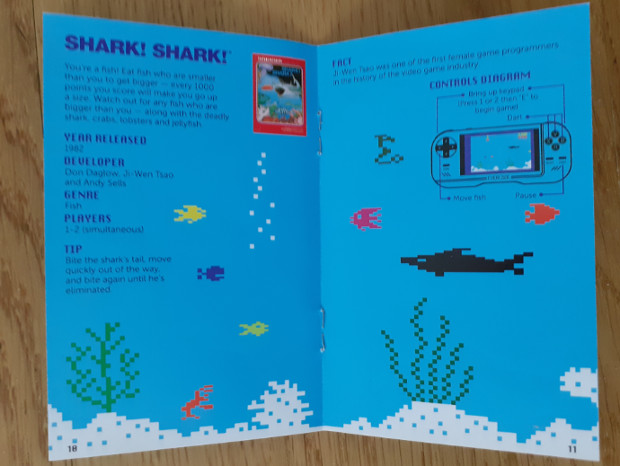 Example spread in a game manual.

In addition to the controls being described in the booklet, the system interface is also useful in reminding what the different buttons do. 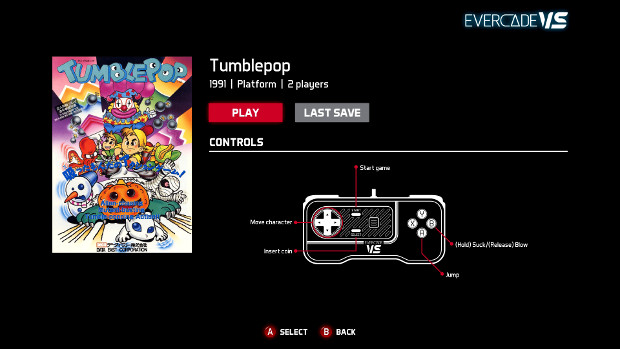 A lot of the appeal of the system are its games, and this is where your mileage may vary. I have fifteen cartridges now, and a few key commonalities pop up.

One, the cartridges have multiple games. Even Xenocrisis, which might warrant the full price on its own, is bundled with another Megadrive game.

Two, the games are either home console ports or they're arcade versions (the latter are their own series). This means NES/Famicom/SNES/Megadrive ports of Namco games in the Namco Museum Collection 1 and 2 cartridges and Megadrive ports of Cannon Fodder, Mega-Lo-Mania and Sensible Soccer. This is a problem because Cannon Fodder and Mega-Lo-Mania as computer ports really could've used mouse controls (which are not available on Evercade or VS). This also "allows" Data East Arcade 1 to have Burger Time, Bad Dudes vs Dragonninja and Chain Reaction, while Data East Collection 1 has Bad Dudes (NES), Burger Time (NES) and Magical Drop II (SNES?).

Three, many of the biggest classic game companies are absent: SEGA, Capcom, Konami, Nintendo, Taito and Activision are the first that come to mind, although I've spotted Taito in some titles. At least Capcom and Irem games have appeared on plug-and-play devices like the Super Retrocade, and there were some Activision games on some Atari Flashback plug'n'play systems, so maybe there is some hope for those three (I'm not holding my breath, though).

Four, I wouldn't say any of the cartridges are jam-packed with classics. Usually there are well-known titles but then some less-known titles that could be called stinkers. Personally, I appreciate being able to see more games I had never heard of before, even if they are deservedly less fondly remembered. This was my first time playing any Intellivision or Lynx games, and I'd say I'm happy having done that now, even if some require the use of a software implementation of the keyboard on the Intellivision controller. (Plus, Lynx's 160x102 resolution on a 40" TV takes some getting used to.) 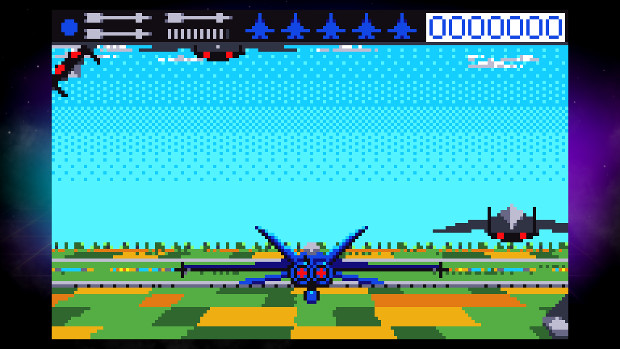 Blue Lightning on Lynx in pixel-perfect mode on Evercade VS. This time, I approve of the phrase "you can count the pixels".

Five, games that use analog controls (such as paddles) will be inferior to the original releases, since Evercade (or VS) does not have any analog controls, not even a thumbstick. I haven't played any of Atari collections, but I imagine those would be the ones with big issues here (plus the reviews I've seen of them point this out).

Six, in some cases there's an obstacle to using the original game exactly like it was, so the games are not exactly the same. Top Gear 1 and 2 are now Top Racer 1 and 2. Barkley's Shut Up and Jam is Hoops Shut Up and Jam. And so on. Some games have also their copyright notices updated (years, new IP owner, ...), and I hear that an adult game has been censored.

Seven, the controller mappings appear fixed per system. This means that to do aileron roll (which the controls page calls a barrel roll) in Blue Lightning, I should press Start despite the left shoulder being unmapped. Beside that, games that tell which button to press, may name the wrong button; Megadrive games' buttons are mapped to X, A and B, for instance.

Finally, on the cartridge catalogue...

The number of games varies greatly from collection to collection: Xenocrisis and Tanglewood collection has only two games, Piko Interactive Collection 1 has 20. Of course, Xenocrisis is a great game and arguably even better on systems that have two thumbsticks on a controller -- unlike Evercade.

What I do like is that the cartridges sometimes have also hobbyist/homebrew titles. The Intellivision Collection 1, for instance, has Princess Quest (Óscar Toledo G., 2014). Then there's the Mega Cat Studios Collection 1, which is full of indie titles for classic systems like Tanzer (good), Coffee Crisis (woeful) and Old Towers (I like it).

Personally, I'm satisfied with the system and the games. Being able to/having to try out games I had never played before is also good when I remember not all of the games should be expected to be actually good by modern standards. I still won't be getting all the collections, despite already having more than half of the cartridges.