No relation to Quintet.

Quartet is a puzzle game that has made its rounds on multiple platforms before landing on MSX in 2018, courtesy of Ilkke and bitsofbas. The original concept appears to be from a Flash game Quartet (Photon Storm, 2010). Several ports of the game are called Assembloids, such as those on Pico, C64 and Atari 2600. 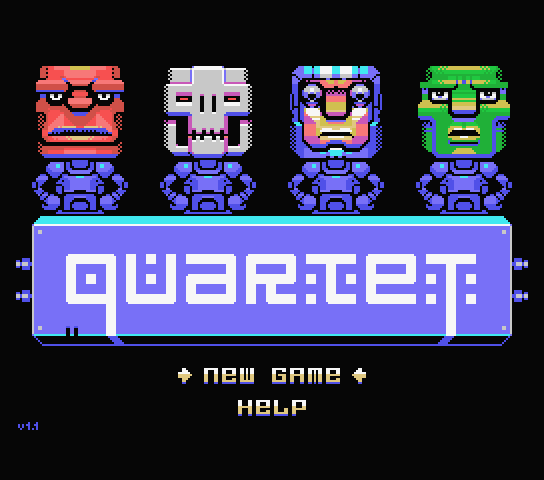 The title screen with the four faces properly composed.

This is a timed puzzle game. The goal is to reconstruct the faces from four tiles. Once a face has a piece in all four positions, it vanishes and the player scores points. All the player does is choose which of the four faces-in-progress to send the face piece into with the press of one button.

The difficulty comes from the piece being randomly chosen and from a randomly chosen face. The stick is that if the piece is sent to a face that already has a piece in that position, the player loses a life. The same applies if the timer to place the piece reaches zero. The carrot, then, is offering more points the more pieces of the constructed face are from the same original or having no loose pieces on the board.

Given how I have yet to see the game offer me a piece I couldn't place anywhere, it's also likely the game doesn't put the player in a no-win scenario either. 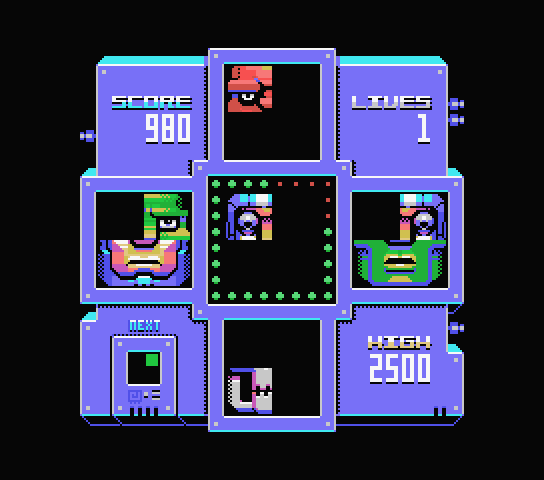 Timer is the diminishing green sequence in the middle, the next tile is shown at the bottom left. And I've made a hash of the faces I've been building...

Visually, I find the game very nice. The chosen artstyle cleanly avoids obvious colour clashes, but is still colourful and detailed. The four different faces are also distinct and their pieces are also quick and easy to identify by shape and colour. Actually, Ilkke made also the original art for the Flash game and several other ports; the characters are, indeed, often similar across versions.

(I suppose one difference between pros and sub-amateurs like me is that I wouldn't have thought of using yellow as the edge on the sides of the blue panels, and that works very well here.)

The menu has a very short music loop, but the actual game has only the timer ticking down to increase the tension. Other than the splash screen ditty, that's also all the music the game has.

In a sense, this kind of multi-platform presence reminds me of L'Abbaye des Morts (Locomalito + Gryzor87, 2010). Despite how that game may first appear, it is a game made for PC, a bit like La Mulana (GR3 Project, 2006) (someone else's longplay of the original). Unlike La Mulana, L'Abbaye des Morts has since been ported to several 80s' platorms without being a demake like the C64 version of Portal.

How does Quartet stack up on MSX, then?

I've never seen the Flash original, and given the current state of Flash overall, I don't think I will. This means I cannot judge if the original has major differences to this ports. That said, the MSX version is a solid puzzle game. As far as I know, the game has no end, just the goal of breaking the high score. The only thing I might consider the game to lack is multiple difficulty levels and possibly an in-game music.