Played on a standard PS4, screen shots captured with an Elgato HD Gamecapture, played on extreme difficulty for co-op and normal for single player.

Ubisoft for me lately has been a mixed bag of the expected and unexpected, one moment they're dishing out another Assassin's Creed, the next they're releasing one of the best competitive hardcore first person shooters I've played in years in the form of Tom Clancy's Rainbow Six Siege. Lately they've been flexing their multiplayer muscles with the release of For Honor, which you can check out our review for right here.

For Honor was another fine example of something unexpected and what my friend called a “casual filter” because everyone goes in thinking “Oh a Ubisoft multiplayer game, how fun!” The next few moments later their character's head is rolling off its shoulders while someone spams the taunt button next to their corpse. Then we have Tom Clancy's Ghost Recon: Wildlands, a large scale open world third person shooter, something most would argue falls into the expected category considering the popularity in open world games in these recent years – so let's start with that.

The open world of Wildlands 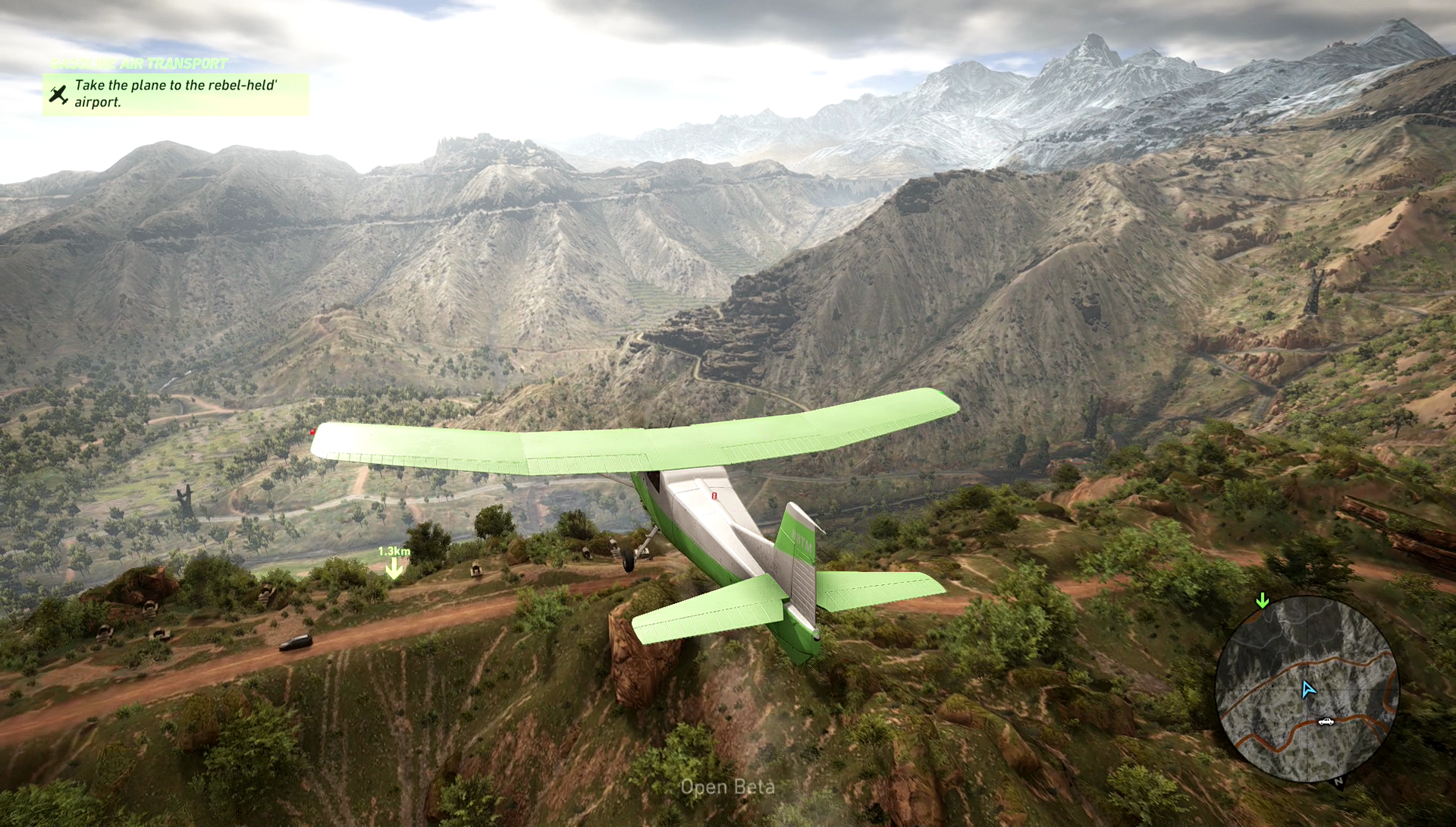 For me personally the size of an open world doesn't mean much to me, I'm more interested in what I'll discover in an open world game as opposed to how long it takes me to travel around it. Which as of late the ladder of that seems to be the goal of a lot of open worlds games and I can't say Wildlands is any different. In a lot of ways this game reminds of of Just Cause, it's big and massive but just hope to god you don't accidentally get stranded somewhere far away from roads, otherwise you'll be in for a nice long walk without much of interest to see.

Wildlands of course is damn huge and according to Ubisoft it's their largest open world to date, set in the country of Bolivia the beta features two distinct areas to liberate from the evil clutches of the cartel. However the developers claim the final game will include nine different terrains for you to explore, in the beta though one area was basically a mountainous sprawling jungle. 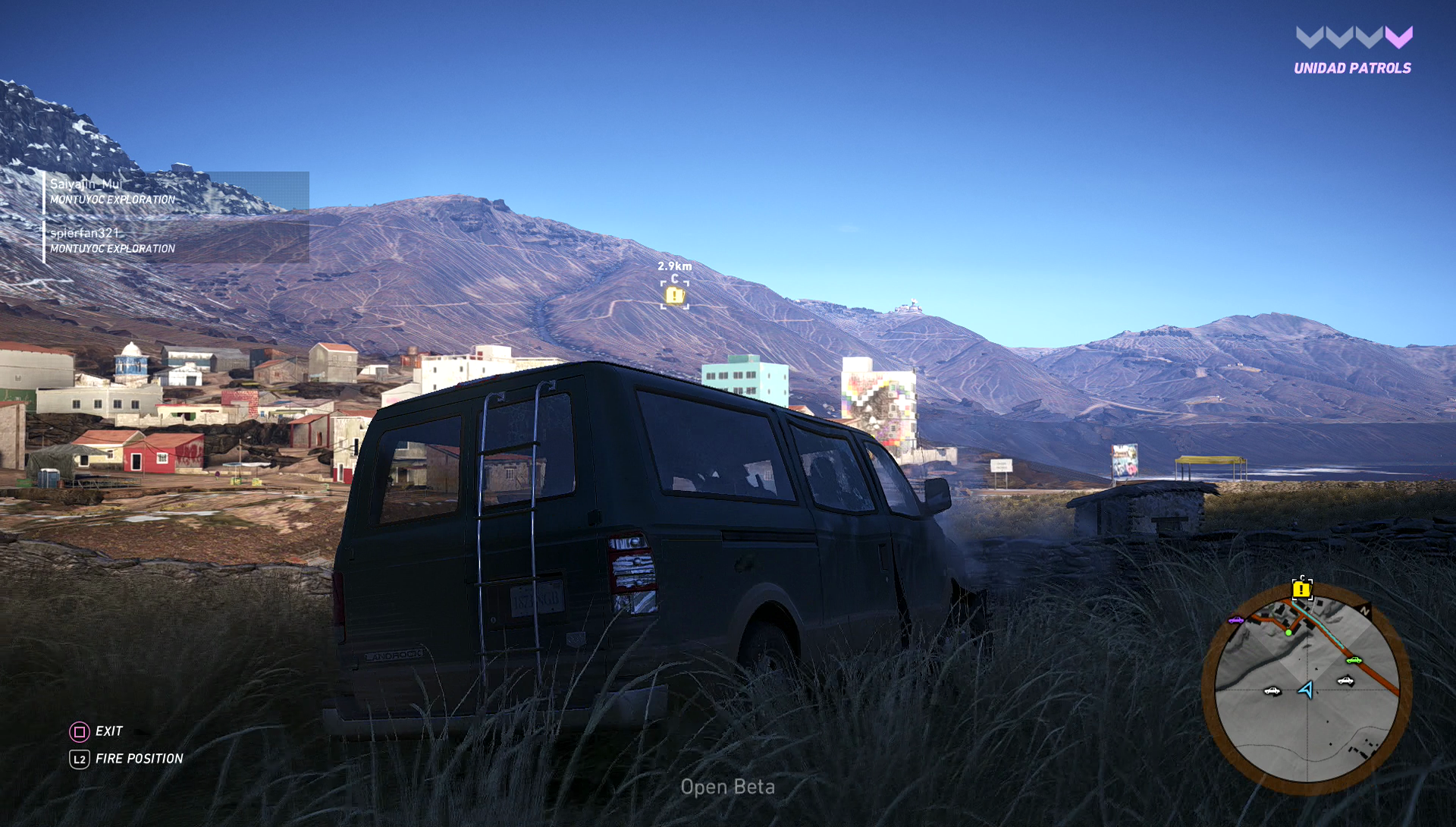 The other area of the beta was mountainous yet again, but it was also extremely vast and open, while also being cranked up in difficulty compared to the first area, one reason for this is simply because of all the helicopters patrolling everywhere. Playing on extreme in co-op with some friends and being spotted by an attack helicopter out in the open with no cover basically spells your death wish.

Wildlands also has plenty for you to do in its open world, just bringing up the in-game map as expected from an open world Ubisoft game it's absolutely cluttered with things to see and do, thankfully with no pesky towers to climb this time. 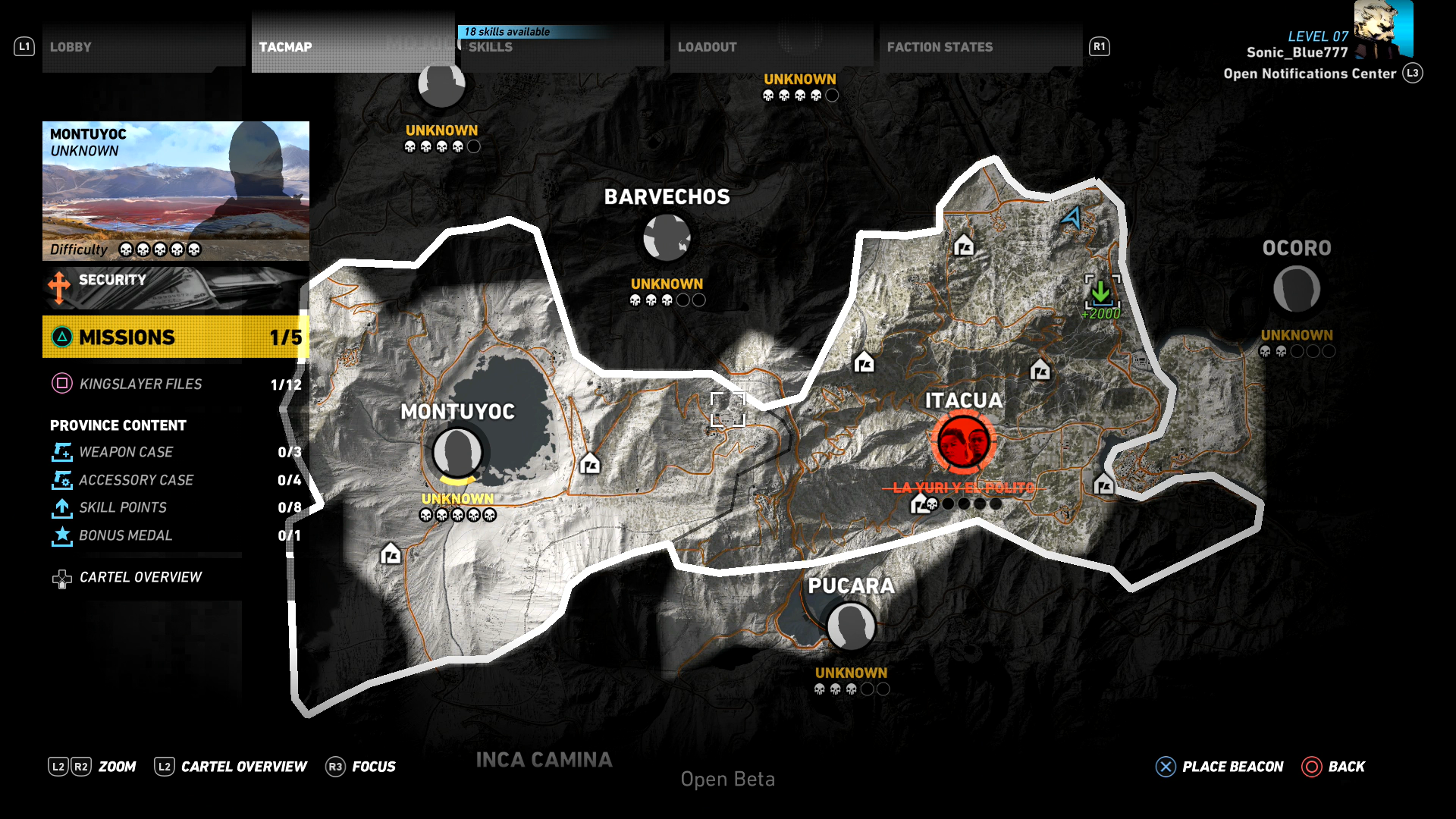 Everything you'd expect from collectibles such as audio logs to find around the environment, to a number of different side missions ranging from stealing cartel vehicles such as planes and helicopters, to timed events such as shutting down a radio signal by driving to each radio tower and shutting them down before the timer runs out.

Wildlands also features a very robust customization system, everything from your character's sex, ethnicity, hair style, the different tacticool outfits they can wear such as ghillie suits, to something as simple as jeans, a t-shirt, and a baseball cap. So of course I went ahead and created a female Big Boss with an American flag and bald eagle tattooed on her arm – I mean who wouldn't? 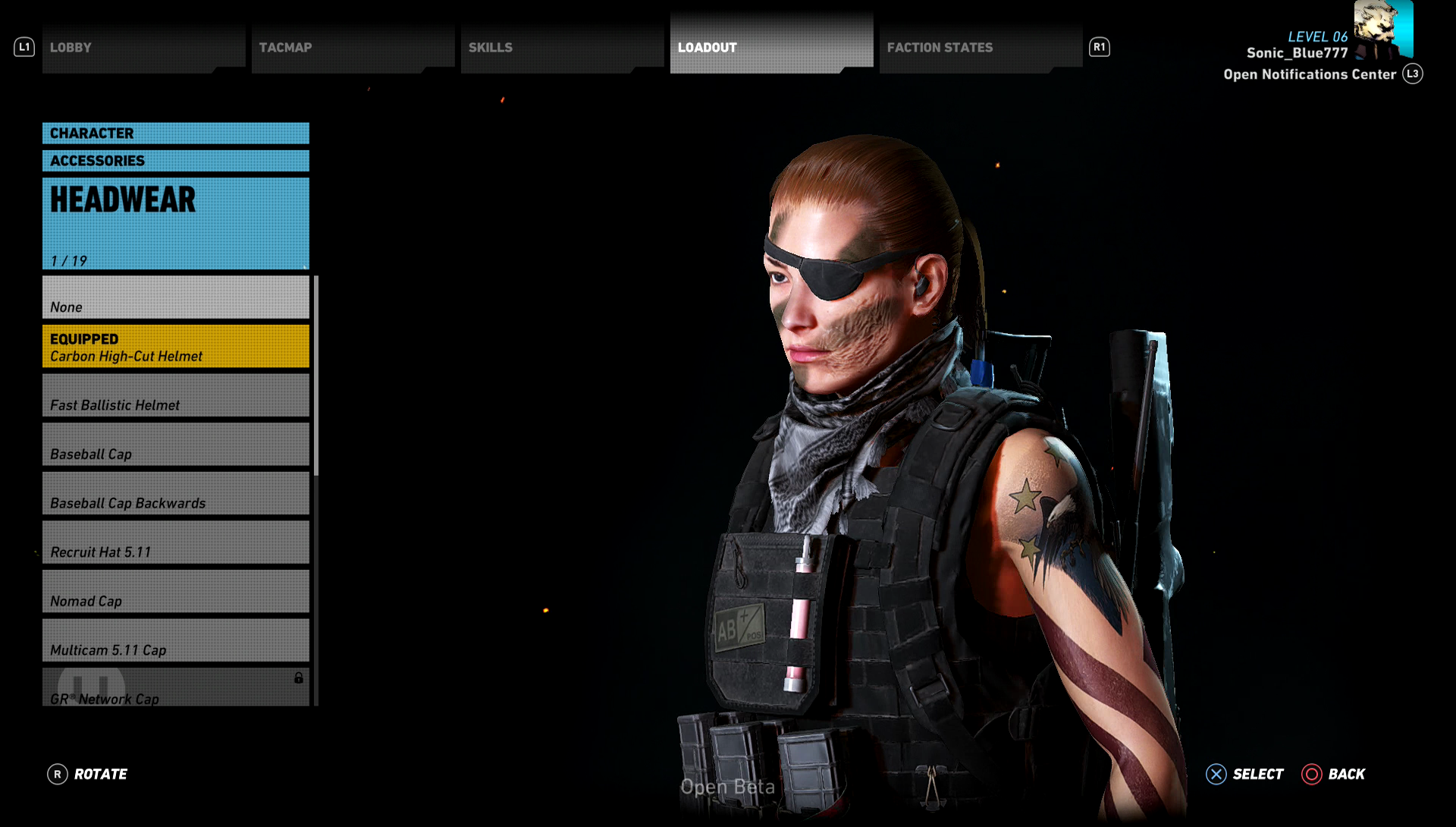 This depth of customization also applies to your weapons as well, very much reminding of me Phantom Pain and Guns of the Patriots when it comes to the insane customization of your weapons which I'll probably just end up mostly ignoring as I did in those mentioned games. 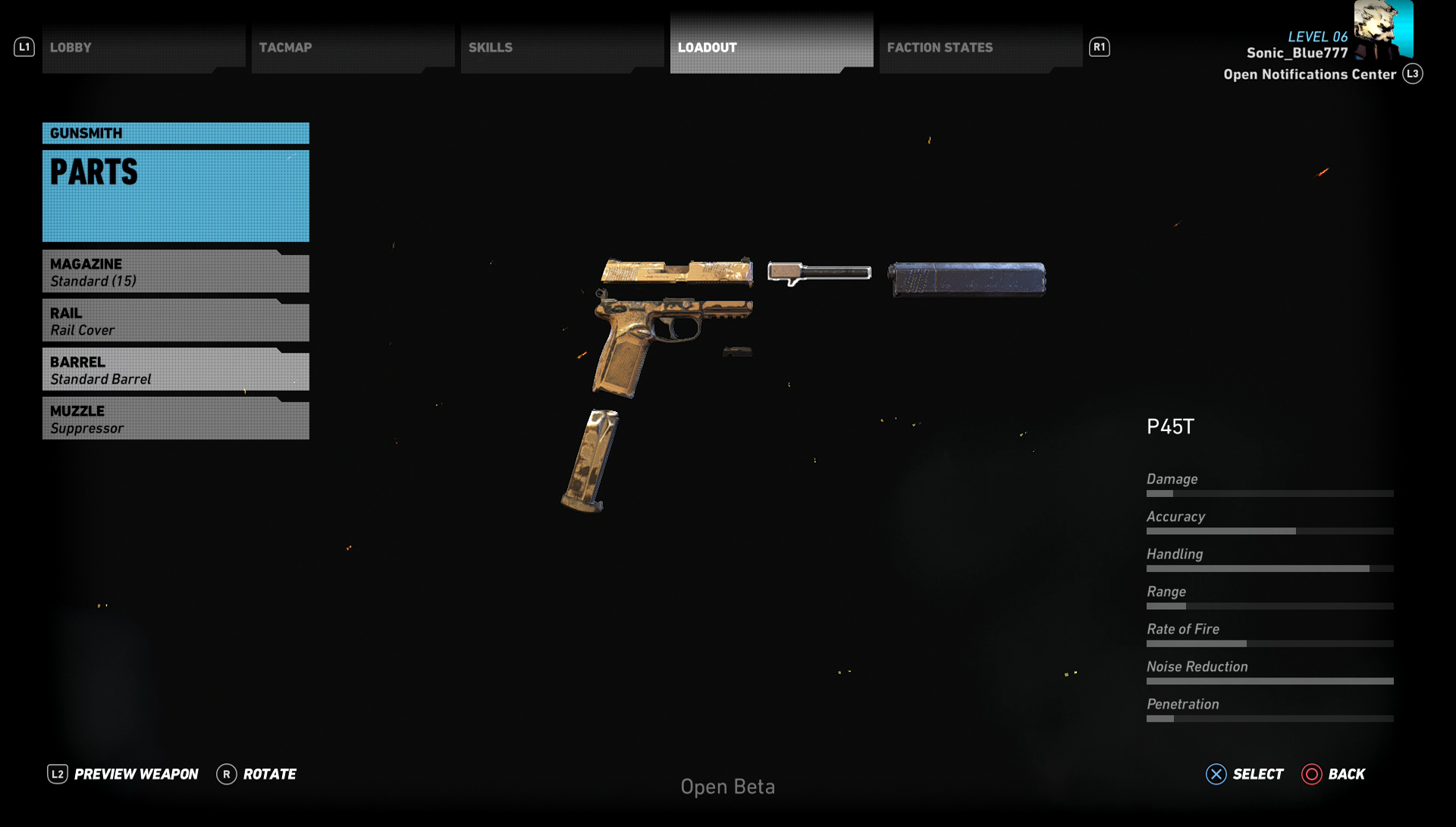 On the topic of Metal Gear though, the thing that was unexpected to me in Wildlands was the surprising focus towards stealth and espionage in the over all gameplay and story. You're sent into Bolivia by the US government not with some massive military, but only as a group of 4 soldiers with the task at hand of basically dealing with the cartel by aiding the rebels and dismantling cartel assists, all at the same time on official record you're not supposed to be there. I highly recommend if you do end up picking this game up to check out the audio logs, as it seems your true reasons for being there and doing these things is hinted at being much more nefarious and politically tied.

As I also mentioned the game is also surprisingly stealthy, if you're playing on the extreme difficulty, it really is the only approach you have for dealing with the cartel. But you've also got plenty of tools at your disposal to help with this. Drones, night vision, heat vision, long range sniper rifes, going prone, crouch walking, I was half expecting to hear a moo in the distance only for a giant bipedal tank to appear out of no where. 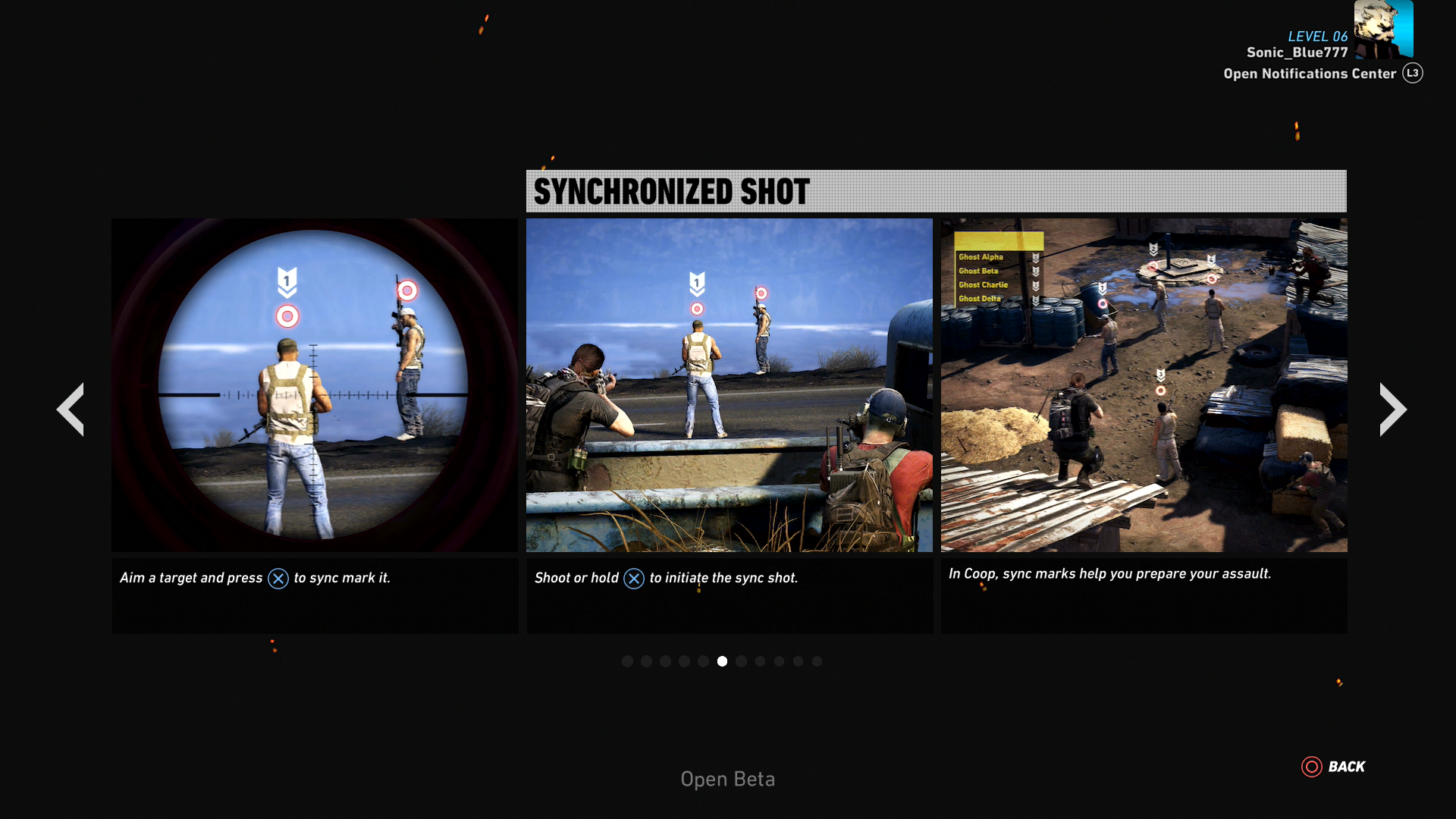 You can also pull off a nifty sync shot and take down multiple targets at once!

On top of that, the game will penalize you if you try to go all third person shooter action hero guns blazing and make a ton of noise, the cartel in Bolivia pretty much run the entire country at this point, including its military and if you make too much noise they will come for you and they're pretty tough to shake off at times in part because Wildlands has somewhat of a wanted system like in Rockstar's GTA franchise, the higher it gets the more trouble will come your way from the Bolivian millitary. 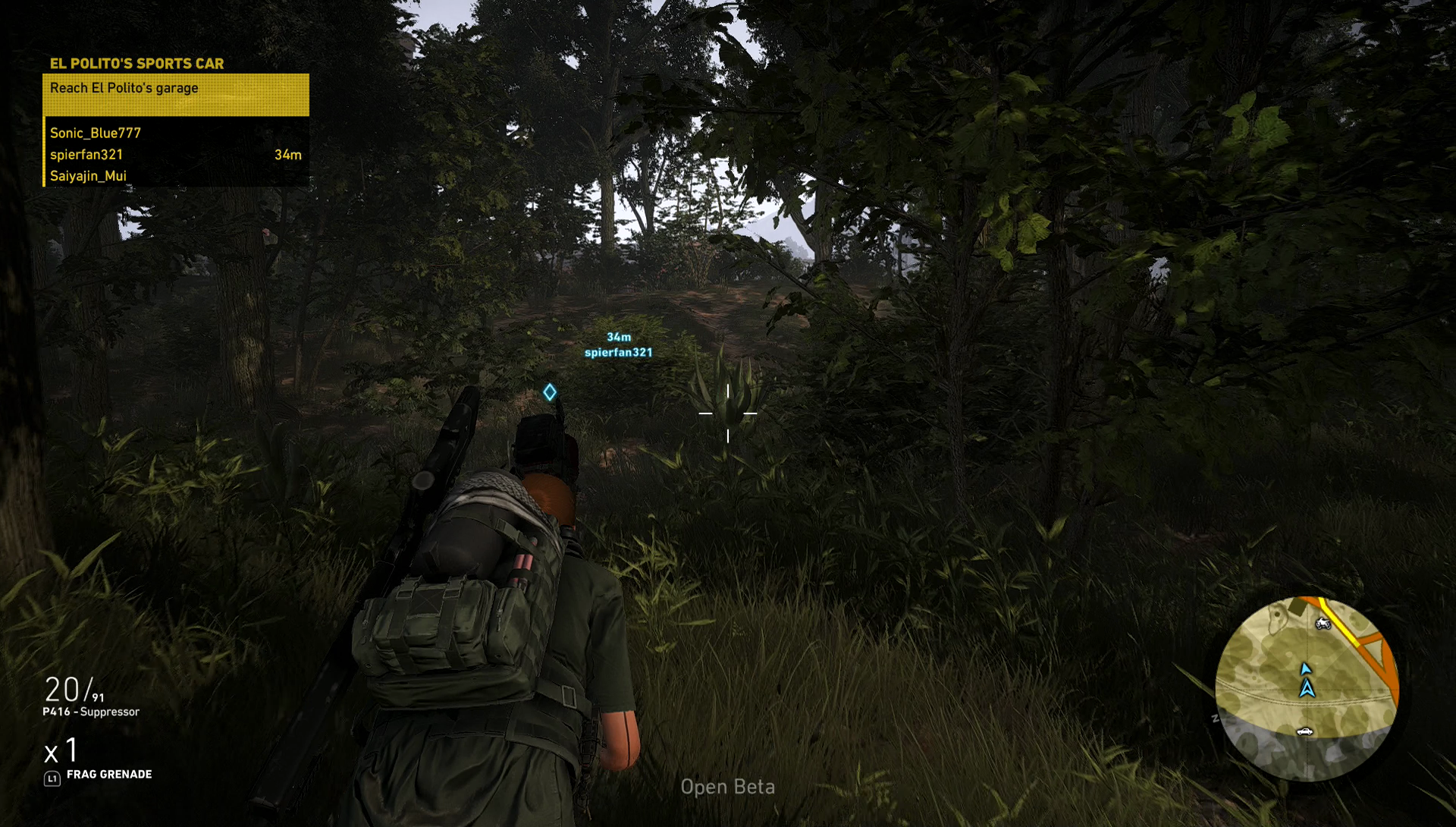 Best yet you can spend fun in the Bolivian sun doing all these things with up to three other friends... As long as your NAT types are good. – Once again sadly Ubisoft have gone with a peer to peer connection for it's multiplayer, so if someone unexpectedly leaves or disconnects, the game will have to sit for a moment and reflect on things while it assigns a new host.

The bad or in this case the stupid?

Stealth is a challenging mechanic to implement in video games, especially an open world game because the AI needs to be competent enough to actually force you to be stealthy to begin with. Sadly Wildlands doesn't fully achieve this as the AI at times is almost brain dead. I had plenty of moments during my weekend with the beta where the AI would all simply go through the same door I just shot a dozen or so of their comrades through, or as you've seen in that clip get completely stuck on objects all together, so hopefully by the full release and probably later patches these things get addressed. 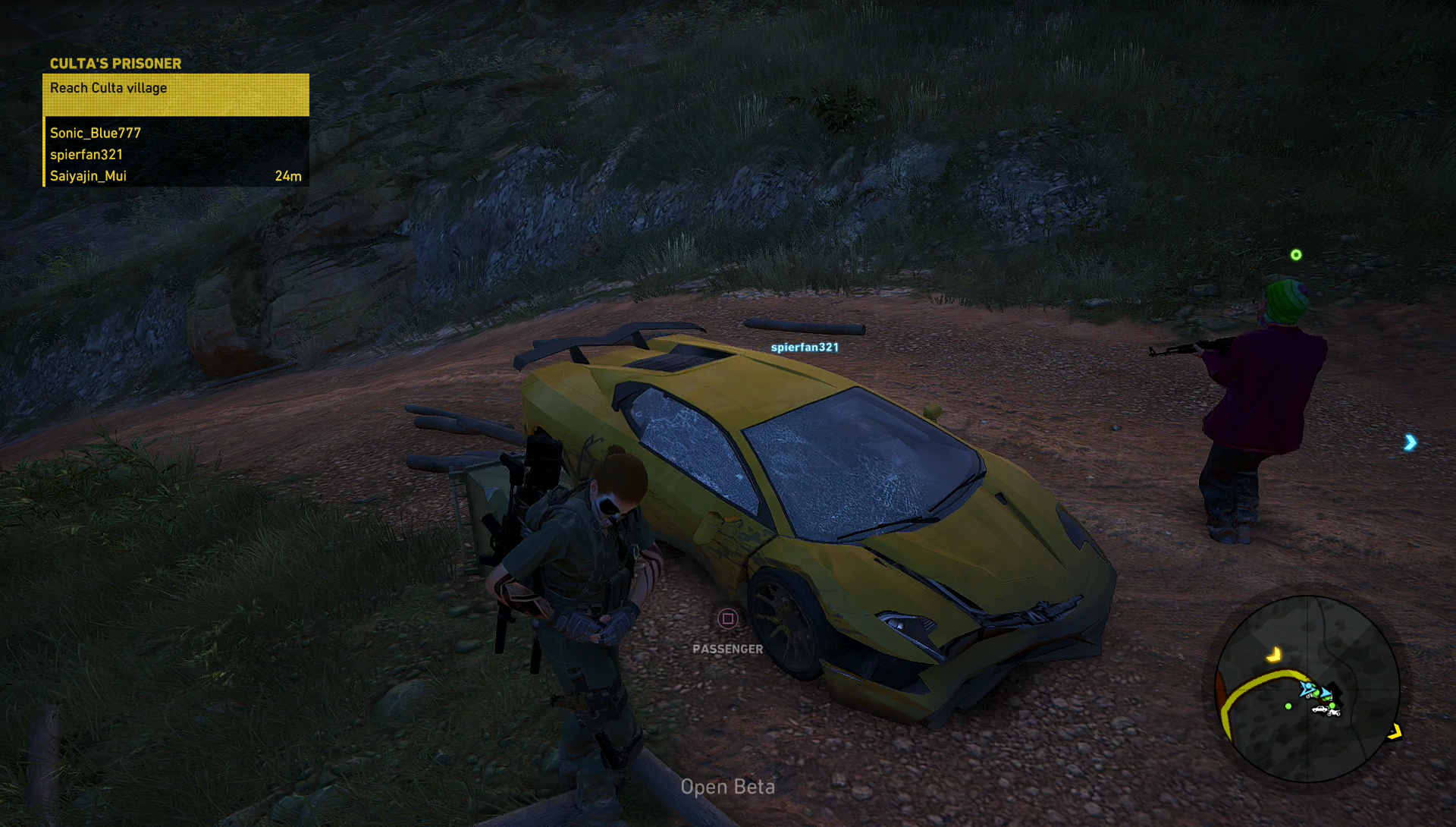 Next up the tone of the story and characters is a little all over the place, without spoiling anything too much, one moment you're being debriefed in a helicopter about the mission at hand and it's dead serious, the next my character was joking about how she found bloody condoms in a high end sports car we just randomly stole as a “fuck you” to some cartel leader, a few story beats leader and we're going through a building with an illegal organ theft operation.

My final thoughts, as expected

On a graphical note Wildlands for the most part ran fine during my weekend spent with it, aside from some minor clipping issues, minor glitches, and poor textures in areas. Aside from that stuff, the open world of Bolivia that Ubisoft Paris have crafted is vast, beautiful, and promises to be massive. 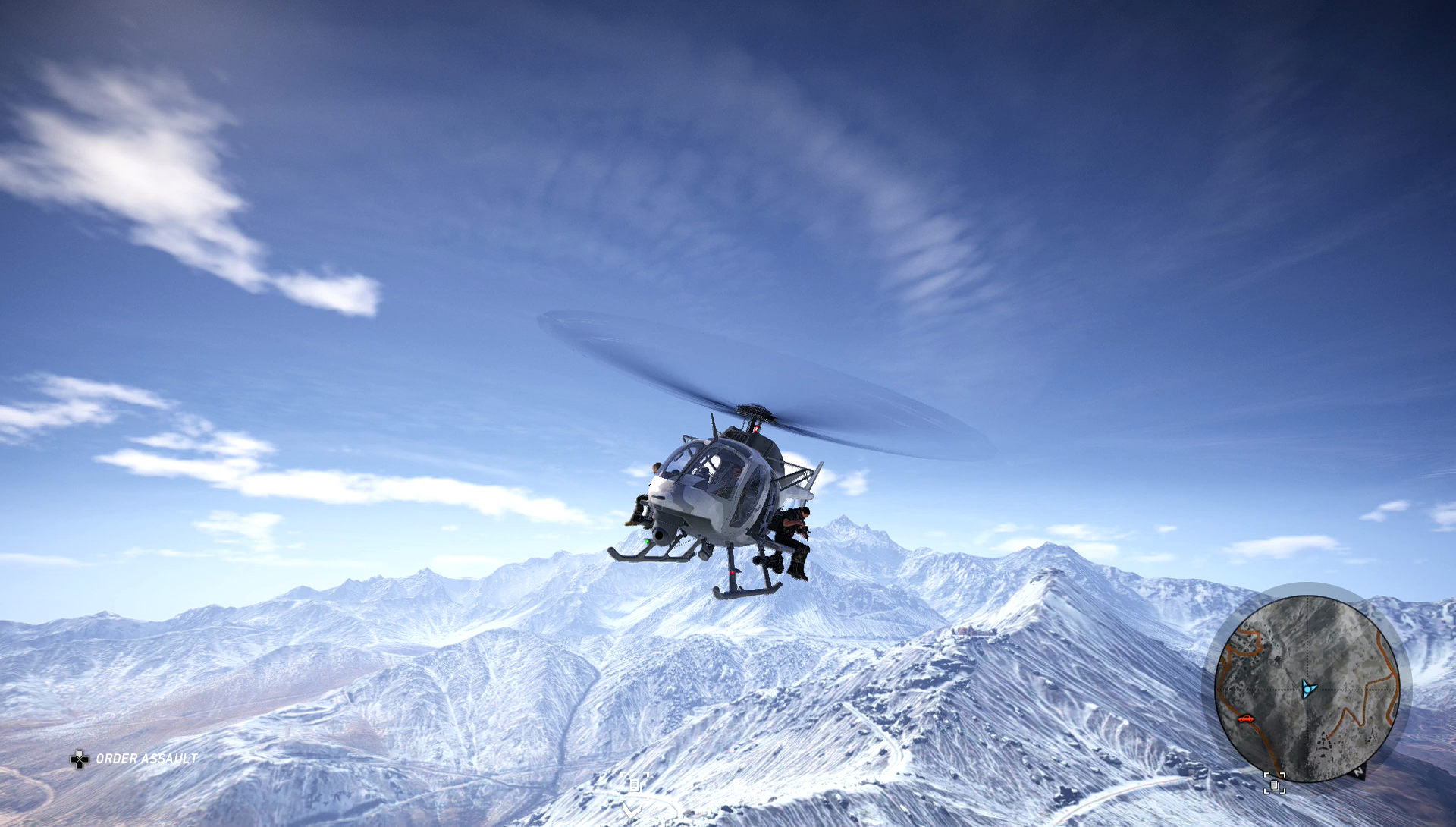 But I've gotta admit it's still a very tough sell for me, especially with other incredible looking open world games coming out such as Horizon Zero Dawn and The Legend of Zelda: Breath of The Wild. After 100% completing both regions offered in the beta for Wildlands in both single player and co-op multiplayer, I feel like I've honestly played the gist of what this game has to offer. I'll still probably end up getting it later on down the road when it's on sale, but let me know what you guys think if you've played the beta over the weekend or finished reading this and if you're interested. 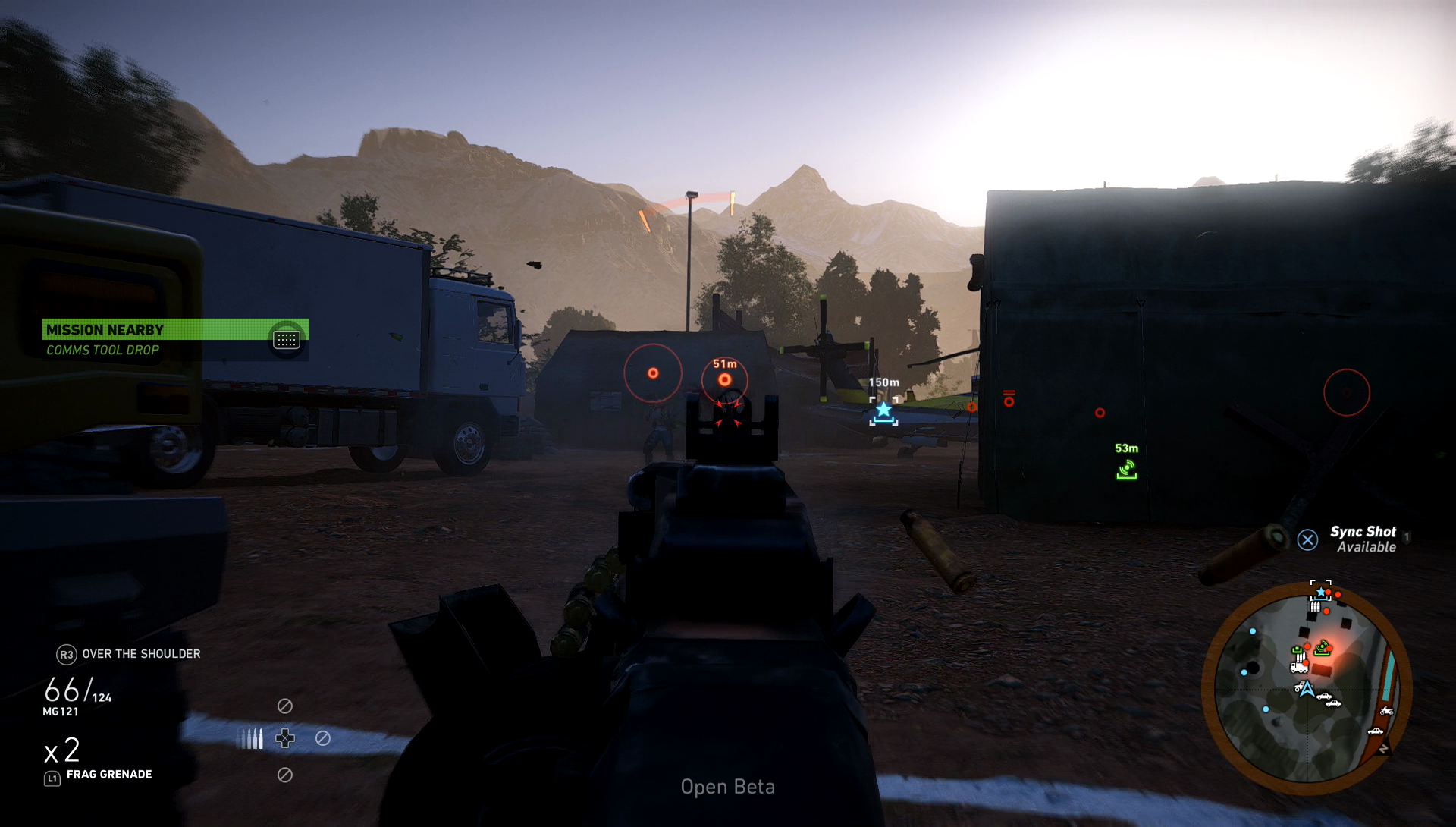 If you are interested in Wildlands, then check out the SICK DEALZ DOOD!