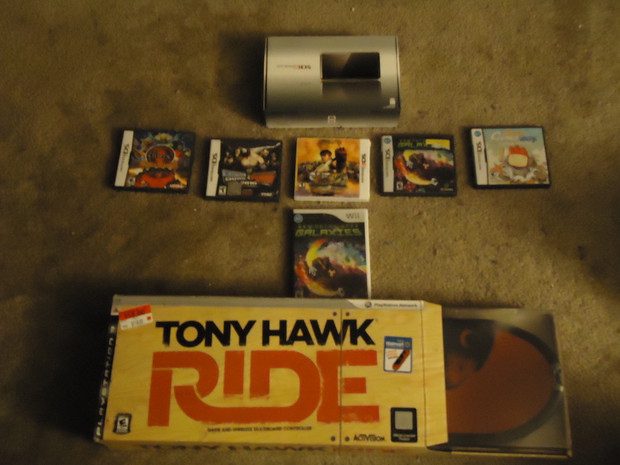 Okay, so maybe I'm getting ahead of myself with my blog title here, but after buying the first gen DS and first gen GBA, I can't help but feel paranoid that Nintendo will be making such an announcement now that I'm the proud owner of a cosmo black 3DS.

Yep, in celebration of my birthday last week, I decided to take advantage of the early price drop on the 3DS at Walmart. That's right, I am now a 3DS ambassador all at the low low price of $170. I also picked up Super Street Fighter IV 3D to play until my 20 free games are ready.

In addition to all that, while at Walmart I ran across a new copy of Tony Hawk Ride for the PS3 for only $15! I always planned on buying this game and despite the fact that I would have rather gotten it for the 360, at that price, I just couldn't pass it up. I can't wait to try it and see how terribad it really is. I love collecting stuff like this.

In that picture up there, you undoubtedly noticed 4 other DS games and Wii game I haven't talked about yet. The 4 DS games were a gift from a friend and they are:

Chaotic: Shadow Warriors - A pokemon-like game, it's actually pretty good which surprised me since I had never heard of the game or the anime it's based on.

WWE Smackdown vs Raw 2010 - Despite being a huge wrestling fan, I don't own any portable wrestling titles, until now. This is one of the better Smackdown titles on the DS and it really plays like a mini version of the console title. Not bad at all, especially considering my friend got it for free from GameStop since the case is damaged and they likely have 100 copies of the game in pristine condition.

Geometry Wars Galaxies - A portable version of one of my favorite XBLA games, getting this game on my birthday inspired me to order the Wii version from Amazon (only $10!) which just so happened to arrive in the mail today, just in time for this blog. They're both awesome titles and anyone who likes Geometry Wars should check them out, especially now that they're both as cheap as their XBLA counterparts.

Super Scribblenauts - The sequel to one of my all time favorite DS games. The weird thing is, my friend had no idea what this game was and just bought it for me because she knows I like weird and quirky things.

So yeah, between this and the two Fallout games I bought on Steam yesterday (3 GOTY and New Vegas) I have a pretty kick ass birthday haul here. It's time for me to open it all up and make it official!
Login to vote this up!