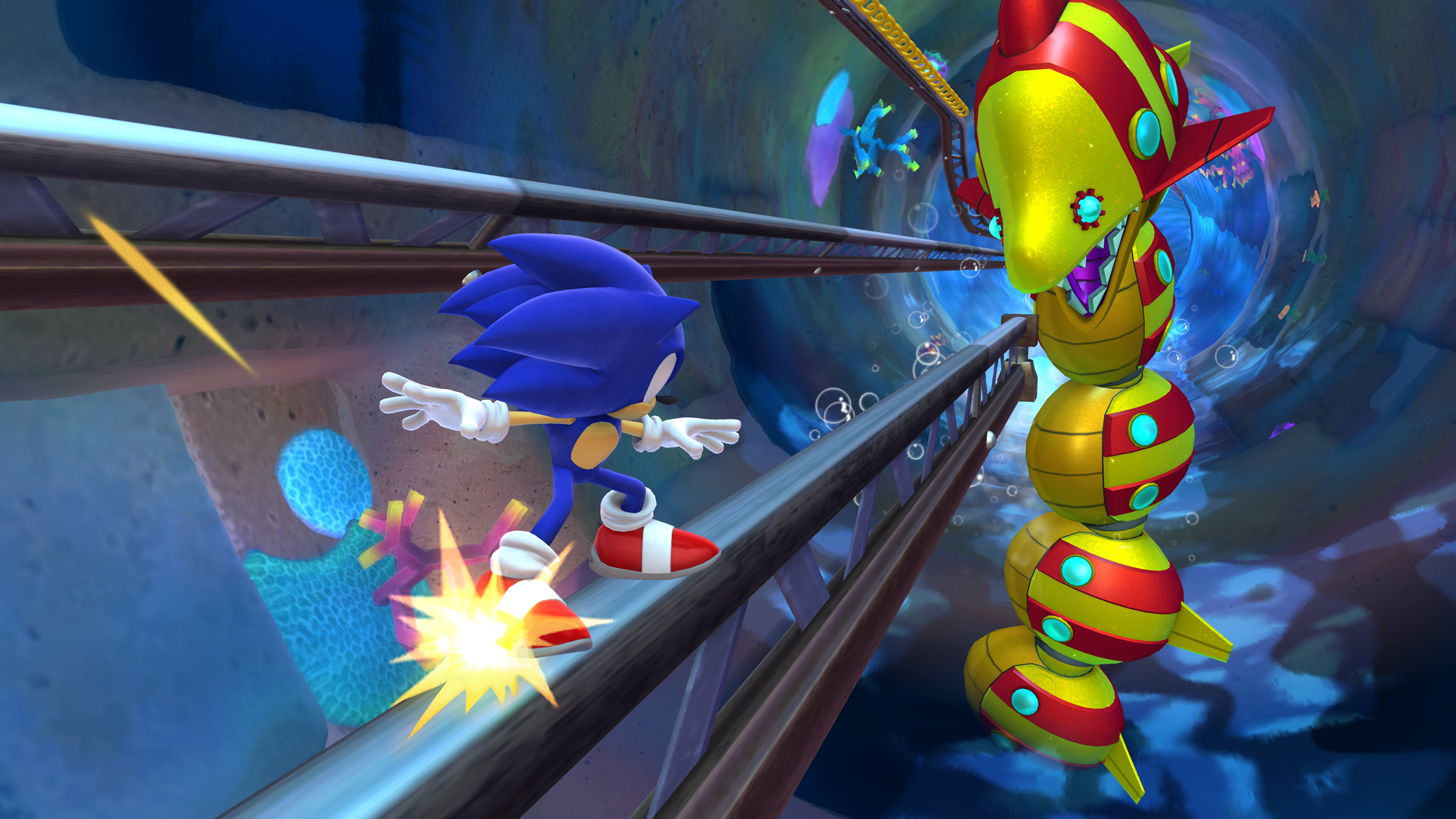 Let's be clear here: I hate Sonic Lost World. Sonic moves way too slowly and the "hold the trigger button to run" idea means the developers didn't have to try implementing good Sonic physics. The level designs are either uninspired Super Mario Galaxy knockoffs or braindead simple. The parkour system is awful. The story is bizarre and The Deadly Six are awful villains, so bad in fact that only Zavok ever comes back to compete in various Sonic spinoffs. The rest are no where to be found. I'm only talking about the Wii U version though. The largely forgotten 3DS release of Lost World was actually a half decent platformer I would recommend picking up some time.

That being said, not everything in Sonic Lost World is bad. Tropical Coast Zone 3, a water stage that takes place entirely on rails, is absolutely superb. Let's break down what exactly happens in this stage. It begins with Sonic riding the rail in loops before the player is quickly given control. Things begin from a behind the back perspective with Sonic moving forward and hopping between rails. All the while you're skating through a giant tunnel of water deep beneath the surface. Beautiful stuff.

As the stage progresses, the area becomes more industrial, with minecarts to jump and giant fans to avoid. At this point the camera moves to the side and the level is now a 2D section. This happens a few more times, with some hills and more loop-de-loops thrown in for good measure. Then you hit the end level capsule and clear the stage.

There are a few reasons this is my favorite Sonic level. Firstly, I'm influenced by how nice it was to discover it in a game I wasn't enjoying at all up to that point. While essentially an auto-runner stage, Tropical Coast Zone 3 is one of the only stages in the game where Sonic feels fast. One of the other few is Desert Ruins Zone 2, which is also a blast. I'm beginning to think Sonic Lost World would have been better off as an auto runner for mobile phones than a full fledged console release. Anyway, the point is Tropical Coast Zone 3 is actually fast which is great.

Secondly, it's so relaxing. The level isn't hard, but it is engaging. the loops, hills, and smooth camera transitions between sections are soothing to watch and play. And the music. The music! It's in the top tier of Sonic level music composition. Sea Bottom Segue, with its gentle piano, swelling chello, and smooth violin sections is a delight to listen to. I'm one of those gamers where music can make or break a game for me and Sea Bottom Segue is the kind of song that makes you stop whatever you're doing in the game and listen (well, you would if the stage it plays in wasn't on rails and constantly moving, but you know what I mean.) Take a listen yourself and then put it on your Youtube music playlist for when you're relaxing or doing some studying. You can thank me later.

I had a difficult time deciding on my favorite Sonic water stage as the series has so many great water stages to choose from. My clear runner ups are Ocean Palace Zone from Sonic Heroes and Metal Harbor from Sonic Adventure 2. Both boast brilliant level design and fantastic music, but something about the calming vibe of Tropical Coast Zone 3 puts it over the top for me. It healed my soul that had been angered by how horrid the rest of the game had been up until then. For those reasons Tropical Coast Zone 3 is my favorite Sonic water level ever.

Alright, I finished the positive portion of the BoB prompt, so if you don't want to hear any negativity towards water levels then pack your bags and head out right now. Go on. Beat it. Scram. For those like me who thrive on negativity and want to read on, let's talk about the absolute worst water level I've ever played in my entire life. 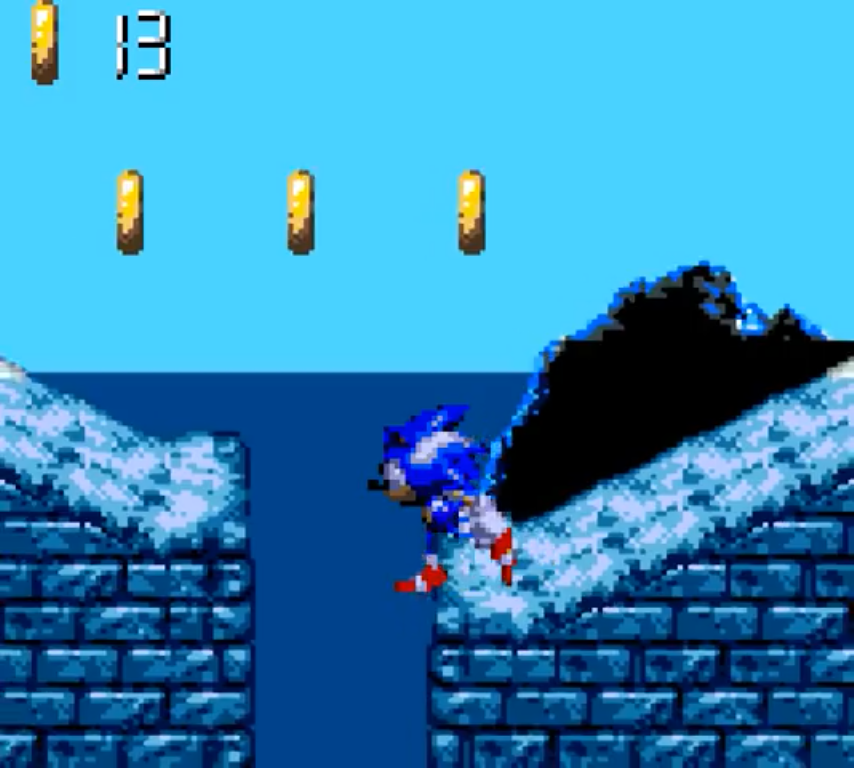 The Sonic water level I'm going to talk about here is from a Sonic game you possibly haven't heard of before and it certainly won't be a stage very many of you have played before. Sonic Blast (not to be confused with the more well known Sonic 3D Blast) is a 1996 Sega Game Gear game with psudo-3D graphics. Think Donkey Kong Country, but with Sonic and Knuckles. It's a slow moving and unremarkable platformer on a system that drains AA batteries at an alarming rate. Basically what I'm saying is if you're playing it on its original hardware you will discover that it's a profound waste of time to play and it's definitely not worth the 6 AA batteries worth of energy it takes to do so.

Blue Marine Zone Act 2 is the worst water level of all time and it's for one simple reason. Just look at it. 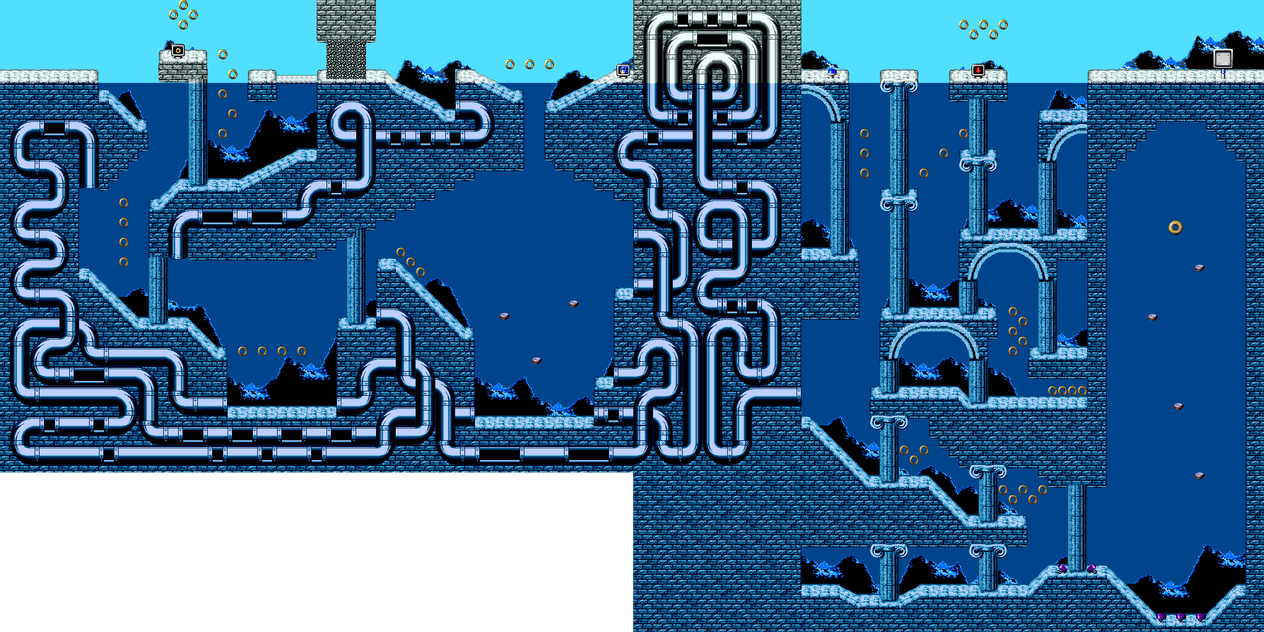 It's a complete disaster to navigate. It may look pretty easy to tell where you're going looking at an overview of the level, but trust me, on the Game Gear it's nearly impossible. With how small the Game Gear's screen is, you can only see a small sliver of the level at any given time (the picture at the beginning of this section shows you just how little of the level is on screen at one time). Since it's impossible to see where you're going you won't be able to tell if you're making forward progress. The pipes loop you around so frequentlly that it's easy to get disoriented. Oh, and did I metion that you move at the speed of molasses since you're underwater and you have to remember to keep getting air constantly, slowing you down even further?

Playing through it from beginning to end as a child was the most frustrating experience I have ever had in a platformer and still is to this day. Not even The Kid levels in Super Meatboy or the toughest levels in N++ have frustrated me nearly as much. If you don't believe me go play it yourself. You'll regret it, I promise you.

That wraps up the article. Thanks for reading and don't let me catch you whining about the Water Temple ever again. You don't know true suffering.