Boxman's farewell prompt to the band of bloggers deal asked a very good question. What makes a heroic character ... heroic?

I'll explain each of those points, via the closest thing to a videogame plot you have on live-action television: Power Rangers /  Super Sentai, Kamen Rider, and Garo. 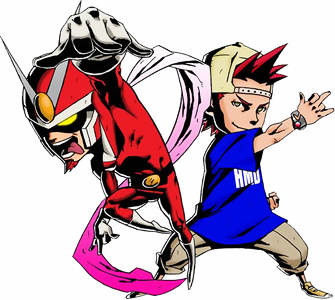 (Sorry Joe, you had to be cut for time.)

All are part of a genre called "Tokusatsu", and while I can't claim to remember what it means, I can tell you it involves a lot of rubber suits, explosions, and (recently, at least) CGI special effects. In a Tokusatsu show, the practical and digital effects are equally important to the story being told as the actors and characters, if not more so. While my focus is effectively on Japanese super heroes, it should be noted that "Kaiju" series like Ultraman or even Godzilla equally fall under the Tokusatsu banner. 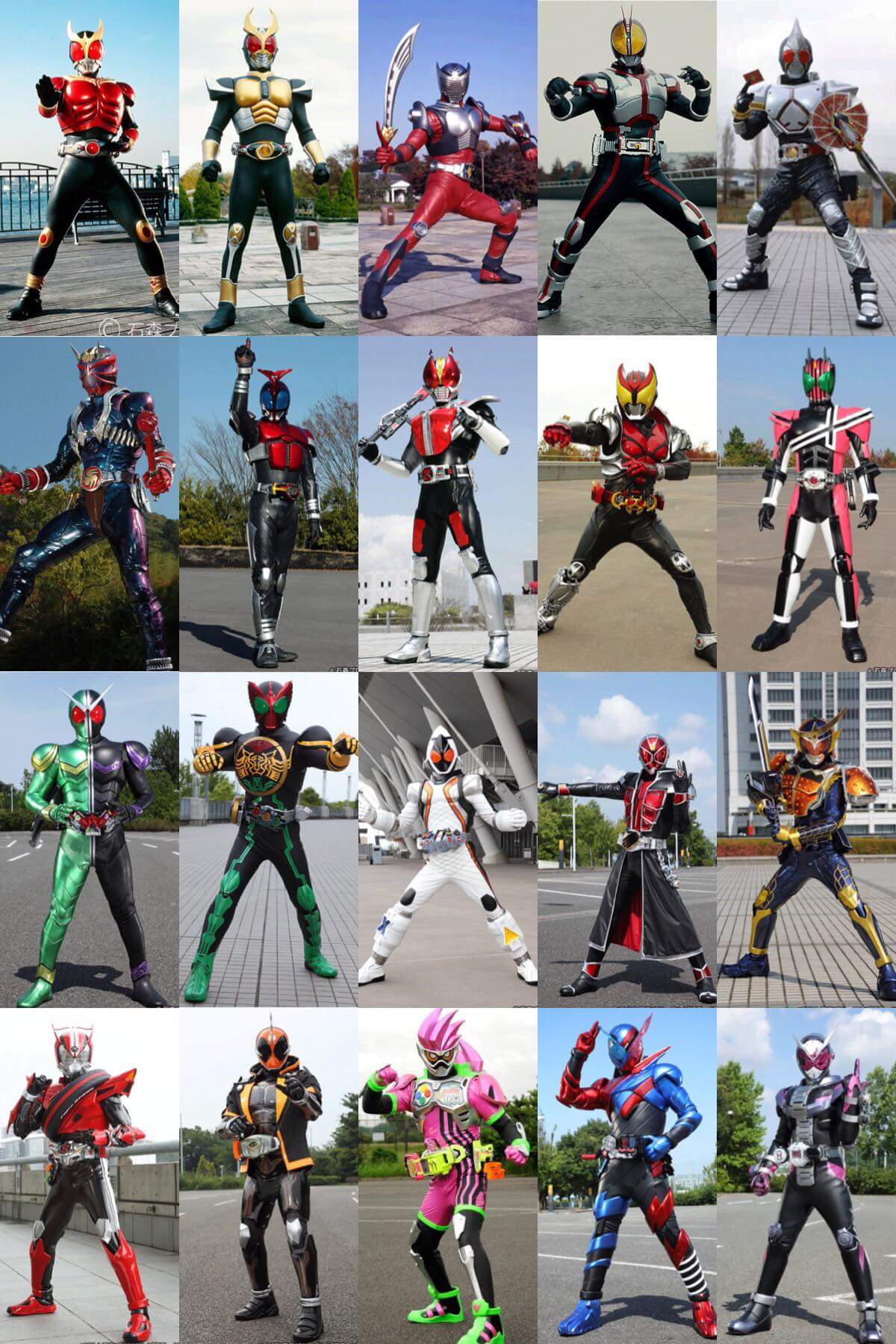 [Pictured: Every main Heisei-Era kamen rider from Kuuga to Zi-O, all rights reserved to Toei, Bandai, and their affiliates. Not pictured: Dozens of alternate forms, secondary riders, and antagonist riders. Also not pictured, the Showa-Era riders who began the 48-year legacy.]

No two riders are fully alike; their one shared trait is their pursuit of justice and refusal to do nothing in the face of evil, when doing nothing would be by far the easiest choice. Among their number are police officers, amateur detectives, doctors, vampires, wizards, and more. Each has their own power, operating under its own rules, distinct from their comrades in the meta-series.

There is, however, a common theme. Dating back to the original Kamen Rider, now known as Ichigo, the powers used to fight off evil often come from the same source used by the villains. For Ichigo and some other early Riders, that source was cyborg body-modification technology. For more modern Riders, it's more a "plot device of the year" sort of thing.

In the world of Kamen Rider, it is not power or ambition that makes one villainous, but the ends to which that power is used: to protect and heal, or to rule and destroy. Kamen Rider OOO (pronounced "Oh-z") is arguably the most blatant about this underlying theme, but threads of it run throughout most if not all Kamen Rider series to a greater or lesser degree.

There is also an aspect of wish fulfillment, inherent in the genre. Everyone on the planet has had one or many bad days. Most, I would imagine, have at one point wanted to be a better version of themselves in an instant. A version that is stronger, whether emotionally/psychologically or physically. Kamen Riders do just that, with a fancy pose and a recurring battle cry. 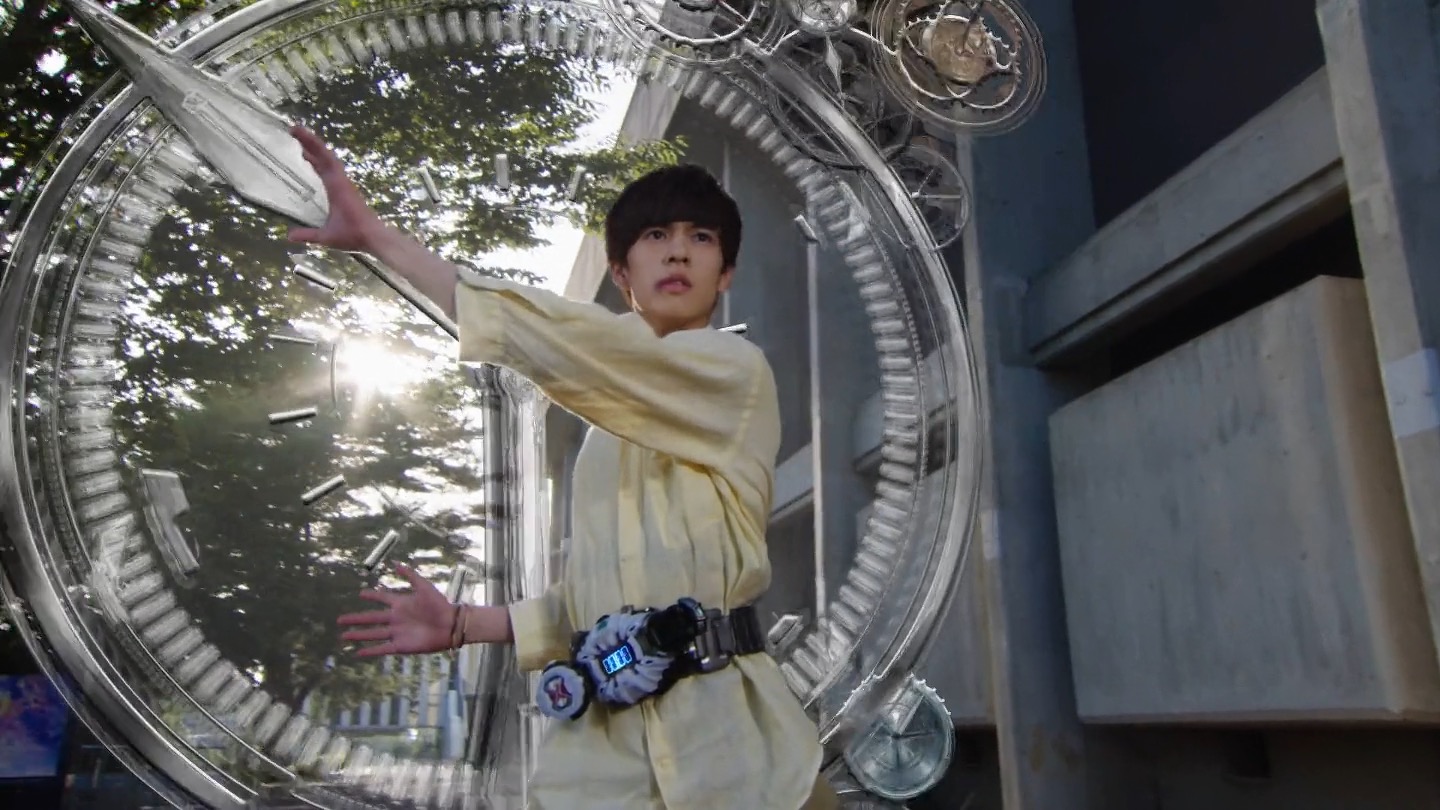 [Pictured: The first transformation of Kamen Rider Zi-O, Sougo Tokiwa. As you might guess by the CGI and pose, his series theme is time and time travel. All rights reserved to Toei, Bandai, Etc. once more.]

Although the circumstances differ, the same is sometimes true in the Super Sentai franchise, the source material for what western fans know as Power Rangers. The previous season before the contemporary Kishiryu Sentai Ryusoulger was relatively unique in having two hero teams, who opposed each other at every turn. "Kaitou Sentai Lupinranger VS Keisatsu Sentai Patoranger", better known to western fans as LupinRanger VS Patranger or just "LuPat". That season's theme was cops and robbers; a team of phantom thieves vs. a team of policemen, both pursuing the same artifacts but with different objectives. I won't say more, because the show is pretty good and deserves a watch. 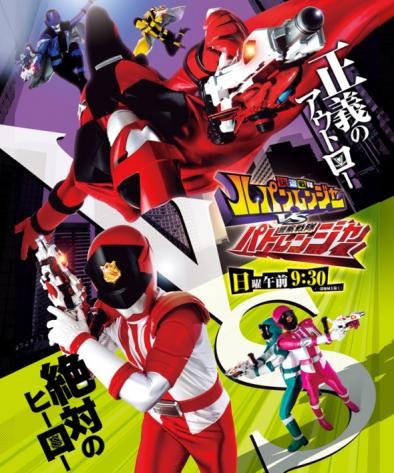 [Pictured: A promotional image for Lupinranger VS. Patranger. All rights reserved.]

Finally, we come to the darkest Tokusatsu meta-series I've seen. "Garo" is intended for adult audiences, and is not shy about showing it. Body horror, psychological horror, a bleak and somber tone, plus no taboo against nudity or sexual themes... And that's in the first episode of the first series. For the sake of potentially sensitive readers, I'm not going to link to the horror aspects of the meta-series. Instead let's enjoy some shiny stuff:

[The armor of Garo, the Golden Knight, as it appears when worn by Kouga Saijima in the first series.]

That is the armor of the Makai Knight, Garo. The mechanics of a Makai Knight are quite different from the average Rider or Ranger/Sentai; the armor itself is a living creature, a demonic being forged into a means of slaying other demonic beings. As such, in the original series, it's treated much like the time limit on an Ultraman fighting at giant size. The demonic armor can only be worn for 99.9 seconds, the actual amount of those seconds in real time varying by dramatic need. Some of the other series drop this mechanic entirely, for the sake of avoiding a repetitive plot line. Can't say I blame them, it's the sort of plot device that can get tedious fast.

Despite the massive tonal shift compared to Kamen Rider and Sentai, the core theme of the Garo meta-series is effectively the same; where there are monsters, there are heroes risking life and limb to stop them. Where the world is bleakest, there are always those striving to find or become a light in the darkness.

That much, at least, is less fictional than I once believed, and that is what a hero is in my eyes.

Hi, I'm CycloneJoker (at the moment, anyway). I usually go by Silva, but I don't care very much about how I'm addressed. Call me what you will.


My favorite game genres are RPGs, roguelikes (and/or roguelites) and the occasional visual novel, though I'll give games in most genres a fair chance.


I write and draw when I can, and constructive criticism of either is always welcome. Likewise, I'm always willing to provide it if it is requested.


If there's anything else you want to know, feel free to ask.