The Exciting Adventures of Kickstarter

7:12 PM on 05.01.2013 (server time)    0
I've found myself strangely intrigued by Kickstarter lately. Now I've known about it for a long time, but only really got involved when Dreamfall Chapters started accepting pledges. The plan was to give a bit of money to get the game I want funded. However I soon found myself trawling through the vast array of other projects. This is where I started getting strangely obsessed with the whole concept. What follows is the many exciting adventures I've had on Kickstarter. Huzzah! 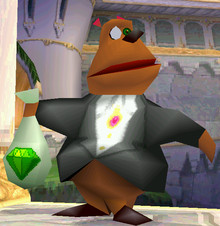 All that being said, Kickstarter certainly isn't a bad thing. It has potential to be abused, but at the same time has great uses. I'm certainly not upset at some of the projects funded by it. Who am I to argue with fans who actively want to give money to projects they genuinely love?
Login to vote this up!

HEY I'M CRACKERS AND I AM A WIZARD!

That pretty much sums it up, but if your still interested...

My name is Pearce, from the UK currently studying Film Studies at university. I like video games and think tea is just the bestest.