About a year ago, I wrote a blog post about the many versions of House of the Dead 1 that were currently available. Of course, while each version had their pros, they all suffered from various drawbacks, ranging from compatibility issues with modern hardware, to the cost needed to get something resembling an arcade-like experience at home. Granted, none of those approaches could be called terrible or unfun, but at the same time there was no definitive version of the game either.

So when Forever Entertainment announced out of nowhere that they were collaborating with SEGA to remake both House of the Dead 1 & 2, I was incredibly curious to see how these new versions would pan out would pan out. How on earth could a small, relatively inexperienced studio handle the task of remaking some of the most beloved light-gun games ever?

Well, the good news is that HOTD1 Remake ended up being a perfectly fine way of playing through the first game today. Its fairly cheap (compared to Sega Saturn copies of the game anyways), easily accessible, and it brings with it a host of new features to set it apart from all previously existing versions of the game. Purchasing the Switch version also means that you can play it anywhere, whether at home or on the go. When stacked up against the Windows 95 and Sega Saturn home ports of the game, Remake arguably dethrones them in terms of sheer value alone.

Unfortunately, Remake ended up introducing some new issues of its own, making the project feel like its so close and yet still so far from being a great...well, remake. 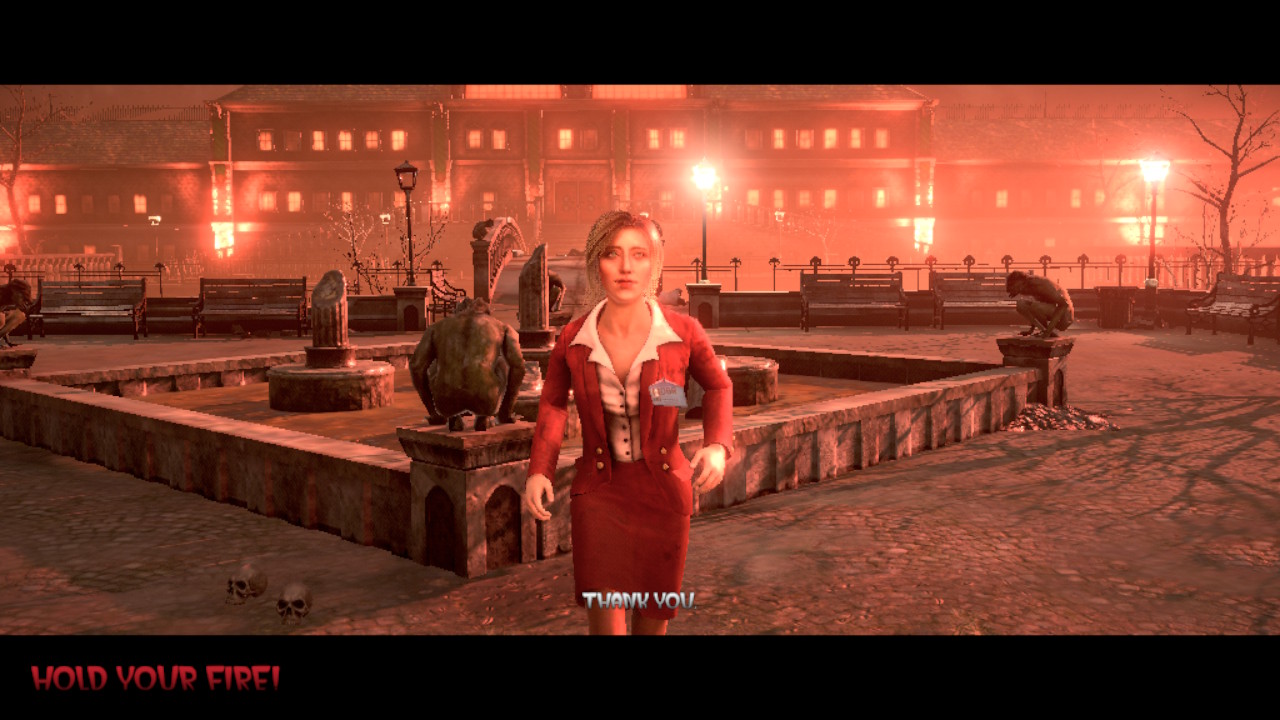 But without wanting to be negative out of the gate, I want to start by focusing on the good, and to the remake's credit there is plenty to like here. HOTD1's visuals have been massively overhauled, mostly in terms of the character models and environments, and there's a lot more props added to make the environments feel a bit more lively (no pun intended). This is great as all prior home releases of the game suffered from massively downgraded visuals when compared to the arcade original.

There's also plenty of neat bonuses added, ranging from software-side achievements, a model viewer to view all the creatures you've killed, and four unlockable weapons - albeit some are certainly more useful than others. The process of unlocking them can also be a bit annoying, as it involves saving all the scientists and then entering the hidden bonus room in one run, followed up by starting up another run and shooting a hidden chest in scattered throughout each of the four levels. It's not an unfair challenge though, as you can always return to the main menu and restart your run whenever a scientist dies, so you don't have to worry doing it flawlessly either.

And if you don't want to go through all that hassle, you can just enter a cheat code to immediately gain access all of them. Cheat codes will sometimes randomly appear on the top border of the loading screens, and entering them on the main menu will enable a notification letting you know they're active, in a manner somewhat similar to the Saturn version. 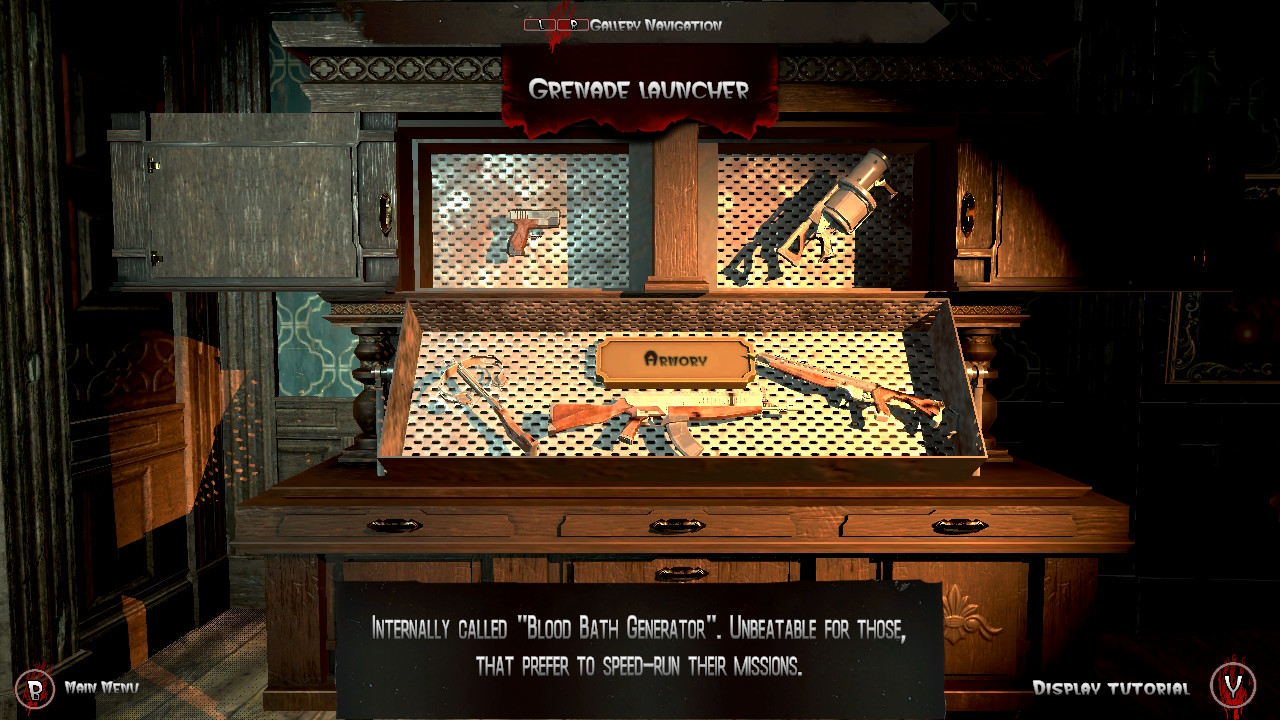 Other noteworthy features include multiple difficulty settings, a variation of the regular game called "Horde mode" - which ups the zombie count, a new scoring system which makes it easier to view the other two endings, a statistics page, and an overhauled leaderboard system, separating each tab by difficulty and game mode selected. Since HOTD1 is still a 30 minute game at its core, these additions do a fine job of extending the game's replay value.

Another great addition are the gyro controls, which while not quite on the same level as a light gun or a PS Move Wand, do come pretty close. Pressing the L button turns them on and off at any time, and you can press the Y button or click the Right stick to reset the cursor back to the center. The default sensitivity was far too finicky from my experience, but turning things down 3 notches and enabling stick aiming made for a pretty great experience, almost quite as good as something like Splatoon on the Wii U.

Finally, there's some slight QoL improvements added to make things more forgiving to potential newcomers. Lower difficulty settings give the player more hitpoints, and in the off chance players use all 10 of their continues, they can sacrifice 5000 points from their score in order to keep playing. 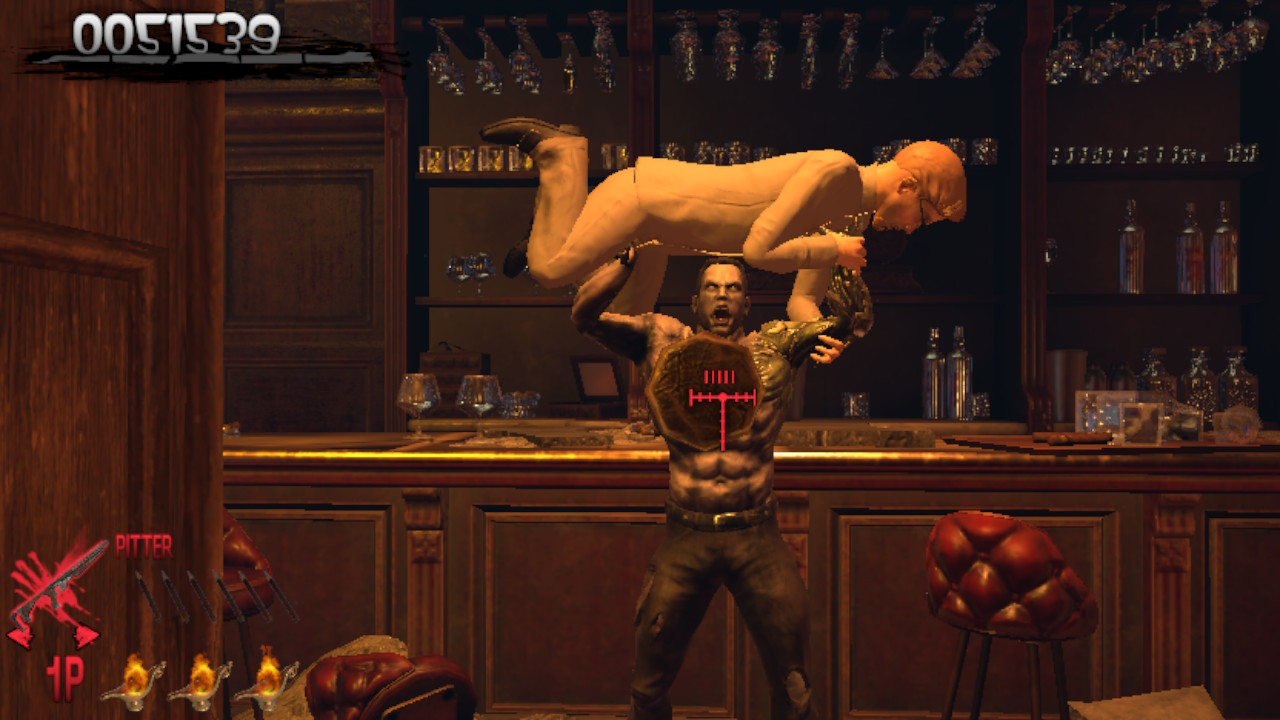 So far everything about this version probably sounds great, and you might be wondering at this point what could possibly be bad about the remake. Well, the first issue stems from the performance on Nintendo Switch. Loading times can be a bit long, usually one long load per level or when transitioning to the Gallery mode. This isn't as bad as the multiple loading transitions on the Sega Saturn version of the game, but still enough that it bears mentioning.

While on the topic of performance, the game doesn't run amazingly either. The graphics mode basically runs at 30fps with some drops here and there, and unfortunately when this mode is enabled there's a terrible overuse of bloom and lens flare in some of the levels.

Turning on performance mode disables the bloom and most of the lighting effects at the cost of looking a tad flatter, but credit where its due, it does play fairly smoothly, especially when played in portable mode. There are still moments where drops can occur though, especially on the game's opening cutscene, which is quite odd. 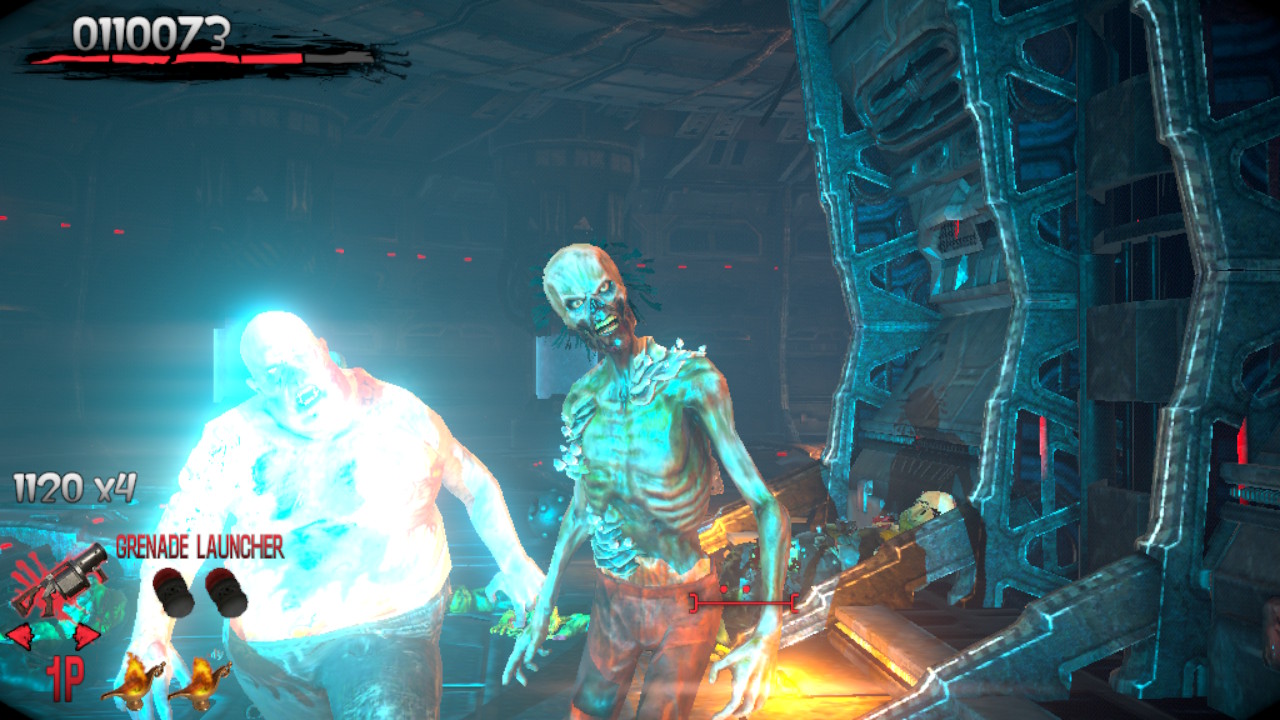 Perhaps more controversially are some of the artistic liberties taken with the remake. The soundtrack and voice acting has been completely redone, with the original performances and music tracks being inexplicably absent. The new music and performances still fit the game and there are times where you can hear some familiar notes in the new tracks, but it's still weird that they went through that effort when the original source material would've done just fine.

The art direction also can be a bit hit or miss. For the most part I'd say it's a faithful overhaul of the original game, and it feels like a step in the right direction compared to the studio's prior work on Panzer Dragoon Remake. But the game's color palette leans a bit too hard on the grey brown side of the spectrum, which coupled with the bloom effect can make the scientists a bit too hard to spot during the heat of the action sometimes, at least when playing in portable mode.

This feels in contrast to the original game where you could easily spot a scientist by their white lab coats which stand out from everything else in the environments. 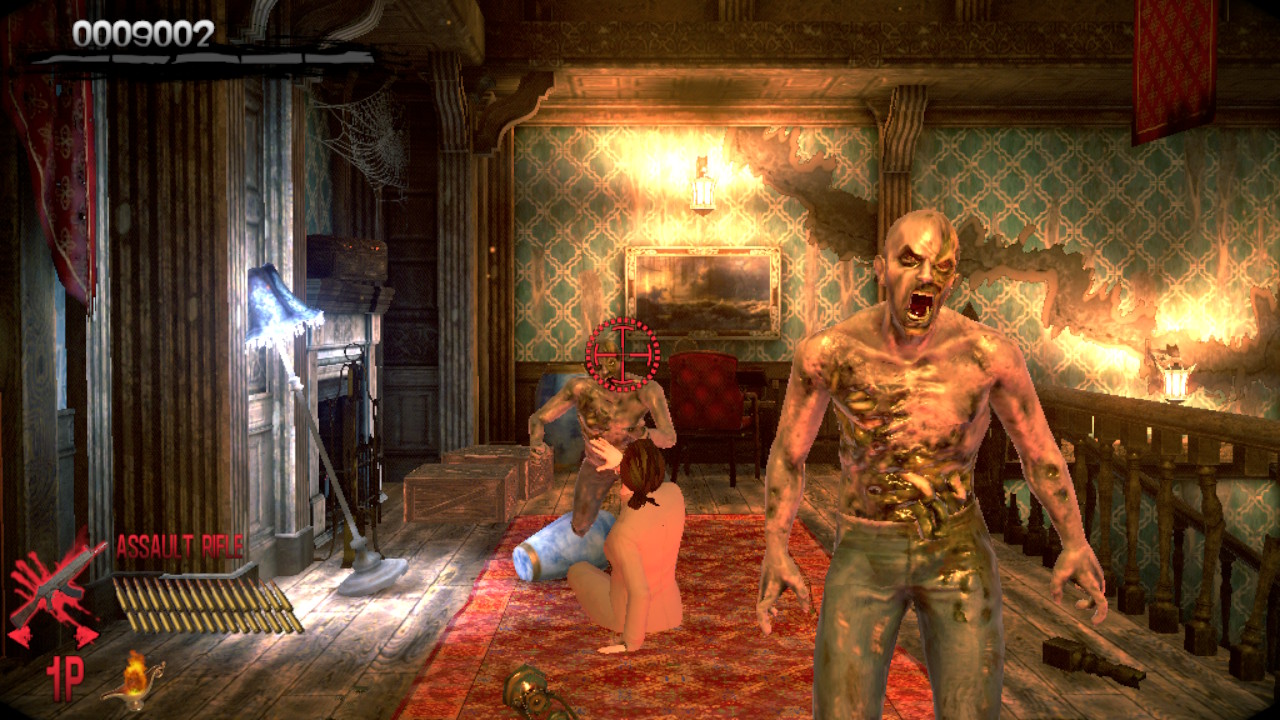 Lastly, and this could just be me, but I found that the game doesn't exactly play 1:1 to the arcade or Sega Saturn versions of the game. Certain boss animations and enemy patterns have been slightly tweaked, which was enough to trip me up somewhat. This is probably because the remake from was made from scratch without the original source code, with the devs trying to recreate the feel of the original game. To be fair, I was still able to clear multiple runs in the remake just fine and newcomers probably won't even notice, but I still feel like these alterations are just enough to make your first few runs feel ever so slightly off.

Beyond that I don't feel like I have much more to add, HOTD1 at its core is still an absolute blast to play, and the remake despite its flaws still makes for a perfectly fine way for newcomers or old-timers to revisit the franchise's first outing. It's just a shame that we couldn't just get a simple arcade conversion, similar to those made by Japanese developer M2 and their SEGA AGES re-releases on Switch.

That's not to put Forever Entertainment on blast, as I do feel like they are improving as a studio. But with the current issues in HOTD1 remake on Switch, the fact that the PS4 version is getting Move support in an update, and the fact that the PC version seems to require fanpatches in order to use modern lightgun solutions like the Gun4IR or the Sinden, it feels like they're still quite a ways off from being...