My Disappointing Trip to Dave & Buster's

Last night, my wife and I spent the evening at Dave & Buster's in Salt Lake City. It was our first trip to one of these places. I was excited to try it out. And we had 2 gifts cards worth $25 each, so most of the evening would be free! We did have some fun, but it was a disappointing experience on the whole. I'd like to recap my evening for you. If you'd like to just skip down to my thoughts on the games I played, feel free to do so. I'll start with dinner.

I guess I should explain what Dave & Buster's is, in case you're unaware. It's a modern, grown-up Chuck E. Cheese. It's a restaurant and bar on one end. The other is an arcade, with pretty much all new machines. You won't find any classic arcade cabinets here.

(note, any pictures in this blog are from google) 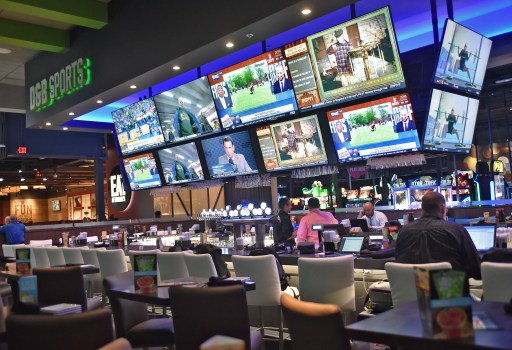 We decided to eat first. We went up to the counter right at the entryway and I indicated that we'd like to dine. They took my phone number and said we'd be sent a text when our table is ready. They gave a 5-10 minute waiting time. I immediately got a text indicated that I was in queue. We walked around for bit to look at the games, then we sat down on a bench near the hostess stand. The lady who took my phone number walked past us at least 5 times and didn't say anything. We never got a text message. There also seemed to be significant confusion at the welcome counter and hostess stand. After 30 minutes, my wife went up to the hostess stand and asked how much longer it would be. The hostess was like, "Your table has been ready for 20 minutes. Didn't you get a text message?" No. We did not. So she seated us. About 2 minutes later, I got the text message.

It took a few minutes for our waitress to come and take our order. After our order was placed, the waitress informed us that D&B has a "tab policy," which apparently means they have to hold on to one of your credit cards as collateral while you eat. So I had to let her hold on to one of my cards, which made me deeply uncomfortable. We were very hungry and had gift cards that needed to be used up, so we stayed. But I wouldn't eat here again because of this policy. I think it's appalling. I won't ever eat somewhere with such a policy again. Also of note, we weren't purchasing alcohol. 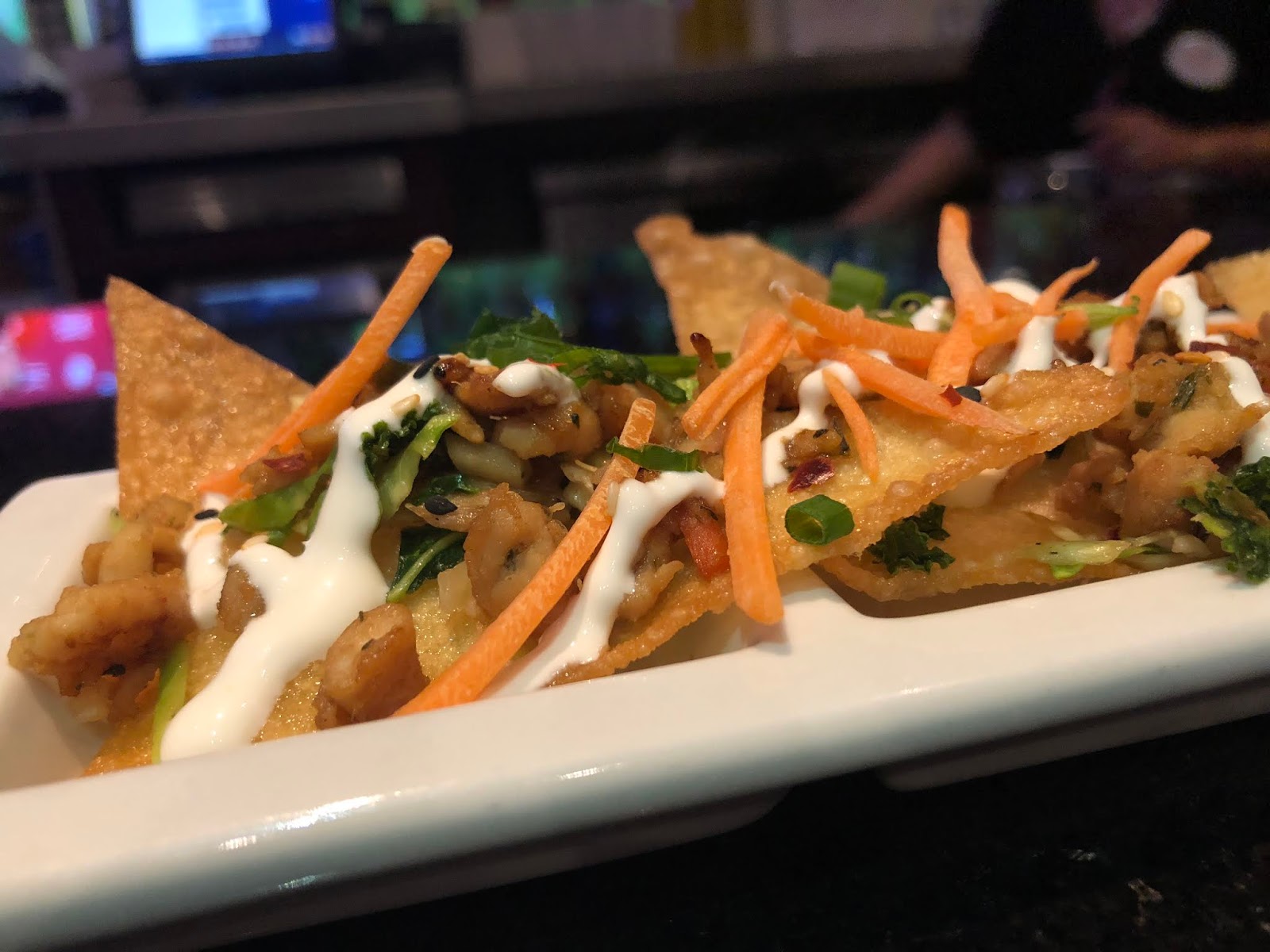 I wanted the chicken and waffle sliders.

After awhile, our food came out. We were not provided silverware or napkins. We started eating. When our waitress returned to check in with us, my wife asked for silverware. The waitress stopped and said in a very snarky manner: "Well the hostess is supposed to give those to you!" It's worth mentioning that we saw our waitress provide silverware and napkins to the two tables to our right. But here's the thing. I do not care who's job it is to give me a fork and a napkin. I don't care who is to blame. I just want a fork and a napkin! The waitress ran and grabbed a set for my wife. She told me she'd have to grab another set for me.

As far as the food goes, it was good, but not incredible. I liked the nachos, but there's not much to them (to be fair, they are an appetizer). The tots were decent. The chicken and waffle sliders were very messy to eat. Tasted pretty good, except they had a spicy mustard sauce on them. It was unnecessary. You're provided with syrup to dip the sandwich in. They don't need mustard and syrup. One or the other would do. If you want to provide people with both, fine. But put the syrup and mustard in little ramekins. Don't apply the mustard to the slider. It just didn't make any sense to me.

Our waitress pretty much disappeared for awhile. I never received a napkin or silverware (and the sliders are messy). Thankfully, some random busboy gave us moist towelettes, so that's something. Oh, and our waters were never re-filled.

On the whole, the service was terrible. I consider a failure to provide silverware and napkins to be a fundamental failing. Our meal came out to $24.65. I gave the waitress a $25 gift card. I left here a 35 cent tip. I feel kind of bad, because that's a horrific tip (arguably might as well have not given a tip at all). But the service was just so bad. We practically ran away. We were so happy to be done with that part of the experience. And thankfully, we got our credit card back (though I locked transactions on it and I think I'll leave it like that for a few days, I'm just that nervous about them holding onto my card).

So then we went to play games! I'll put some thoughts on the games I specifically remember playing. We didn't play any for extended periods of time, so I can't give like a full review on any of them.

D&B gives you a card that you play with (and they charge you $3 for it, which is dumb). But you just tap the card on the machine and you get to play. No dealing with quarters. Any games that provide tickets also put the tickets digitally on the card. Much easier to manage (and much less waste, of course). On the whole, I like that system a lot. 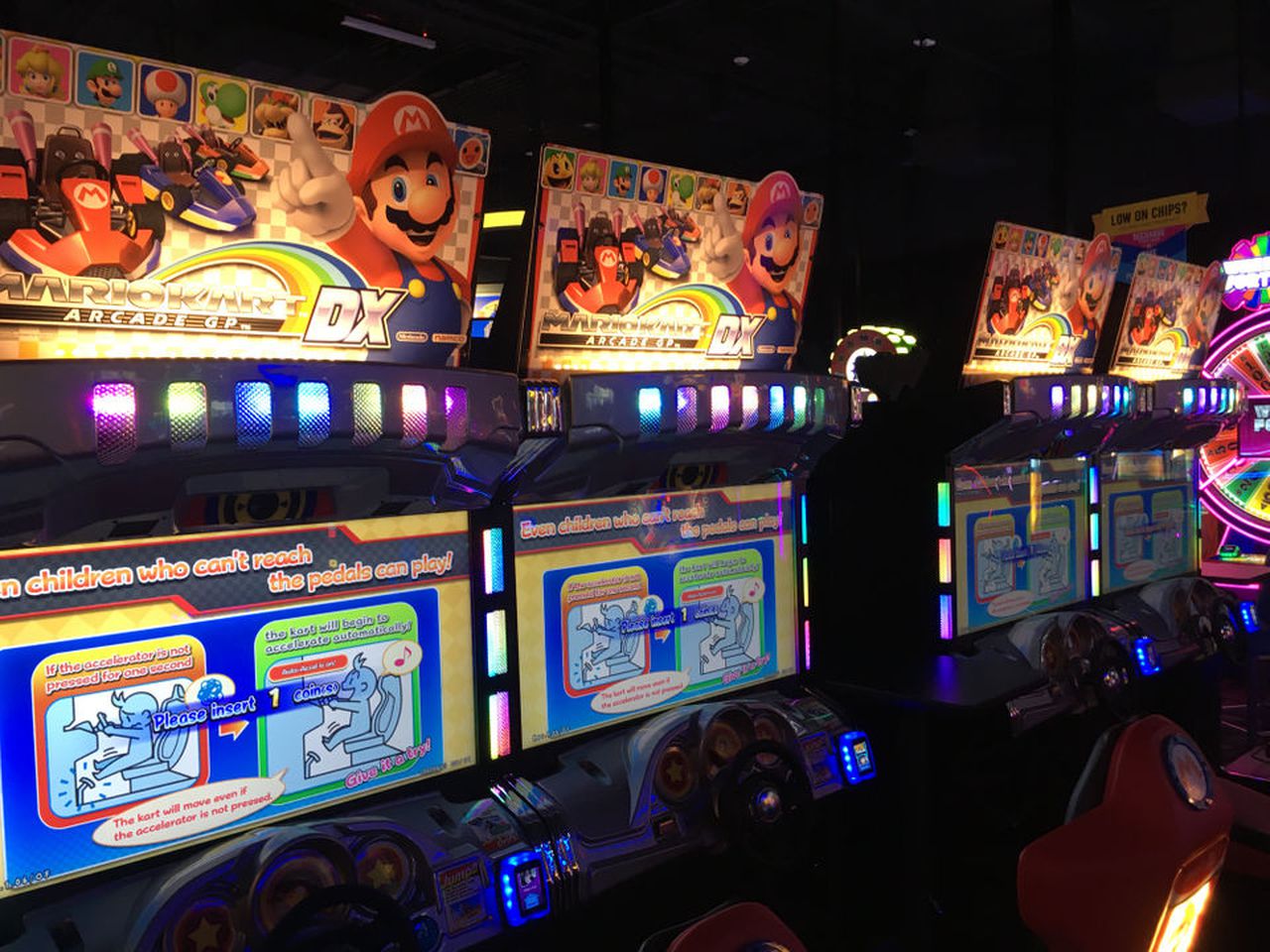 It's Mario Kart. We love Mario Kart. It's great. The thing I don't like about this is the randomization. Before the game starts, you are randomly assigned a Kart, an offensive item, a defensive item, and a powerup item. These are the only items you will have during your entire race. I got a banana, three blue-ish shells that act like green shells, and a spicy chili pepper powerup (which I think is basically a small speed boost? I really don't get how this one worked). And it was fun! Again, it's Mario Kart. What's not to like? 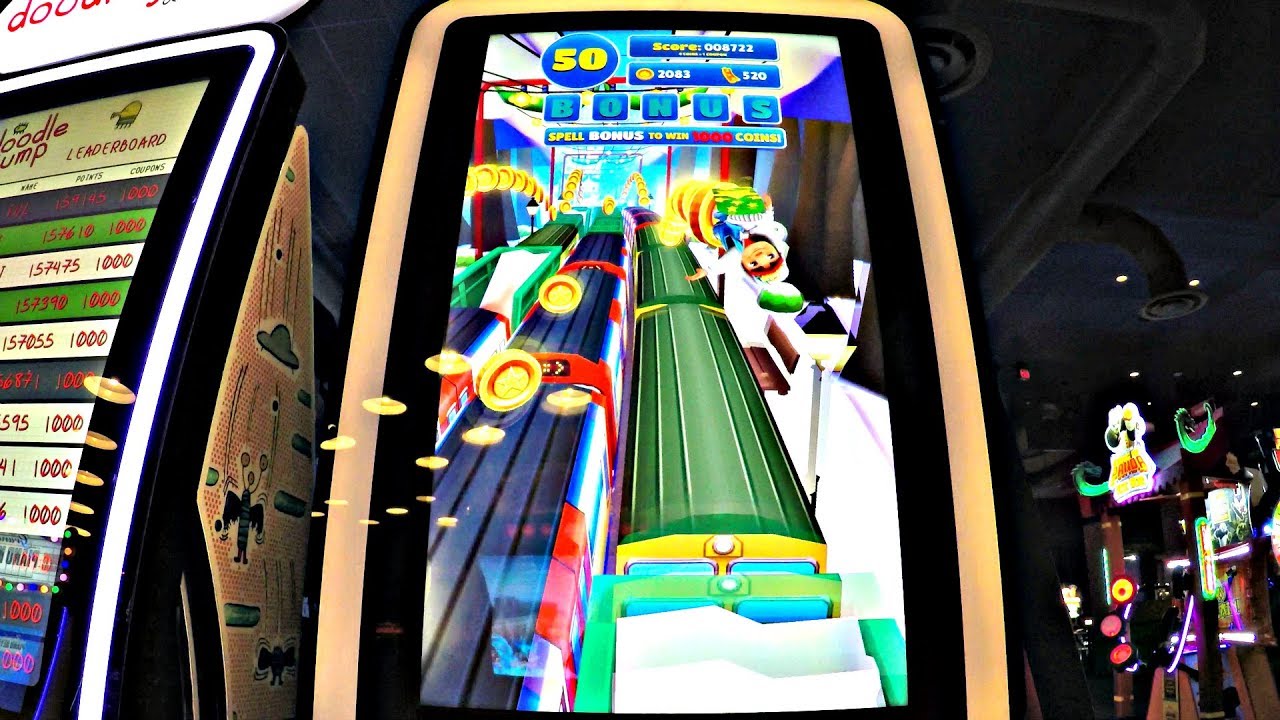 Several of the Arcade games available are really just mobile games slightly redesigned to play as an arcade machine. This is one.

Look, I have played dozens and dozens of hours of Subway Surfers on my phone over the years. I am really good at it (or at least, I used to be, I haven't played in a couple of years). I thought this would be a great way to earn some tickets. But no. It basically gives you a very limited time to collect 5 letters spelling BONUS. And it makes it hard to grab them by having the letters bounce up and down. If you fail to grab all 5, you essentially die and have to put in more credits to continue playing. You don't get to endlessly play this game, which is an endless runner. Does this sound as asinine to you as it does to me?

I get that you need turnover in an arcade. You can't have people dominating one machine on a single play for many minutes at a time. But the solution is simple here. If you've played the mobile game, you'll know that the game slowly speeds up over time. The arcade could work the same, just drastically ramp up the rate of acceleration. Have it get really fast, very quickly. Most people will fail fast if that happens. It's much better than just cutting your player off after like a minute and leaving them feeling cheated.

The main reason I wanted to come here was to play this game. I really like Halo.

Turns out, the gameplay of Halo doesn't translate well to an arcade rails shooter. At least, not how it was implemented here. The basic gameplay of Halo is weapons, grenades, and melee, right? Well, you can't melee (as far as I could tell). You occasionally get grenades, but they don't really work like grenades. You don't throw them. They don't have physics. They just do an immediate, large amount of damage on whatever enemy you're targeting.

You only get one gun at a time. You can't swap out weapons. You have no choice of weapon. We experienced Assault Rifle, Plasma Rifle, and Needler. They all feel basically the same here. They all have unlimited reloads (yes, you can reload a Plasma Rifle here, somehow). They all have large magazines, which is nice.

You fight Flood infection, carrier, and combat forms. This includes some of the "Pure Forms" from Halo 3. There was also a new form I don't believe ever appeared in the console games. It was large and has two massive tentacles that it melees you with. I was really excited to see a new enemy! But it wasn't fun to fight. It was just a huge damage sponge. It seemed that you could shoot off its tentacles, but I wasn't sure if you had to hit it in certain spots to do that? I couldn't figure out if the thing had any weak points at all. It was just dumb.

You fight covvies, of course. Grunts, including Suicide Grunts. Elites, Jackals, and even a pair of Hunters appeared. The Hunters were the most entertaining to fight. Jackals were kind of fun, too.

On the whole, I think there's a good idea in here. But it wasn't executed well. If it were me, the entire game would take place in turrets (whether stationary, or mounted on a moving vehicle). That would make so much more sense than the current game does. I'm sure that there are other ways this game could be made fun. I'm no game designer, much less an arcade game designer.

But this game was a bit of a let-down. 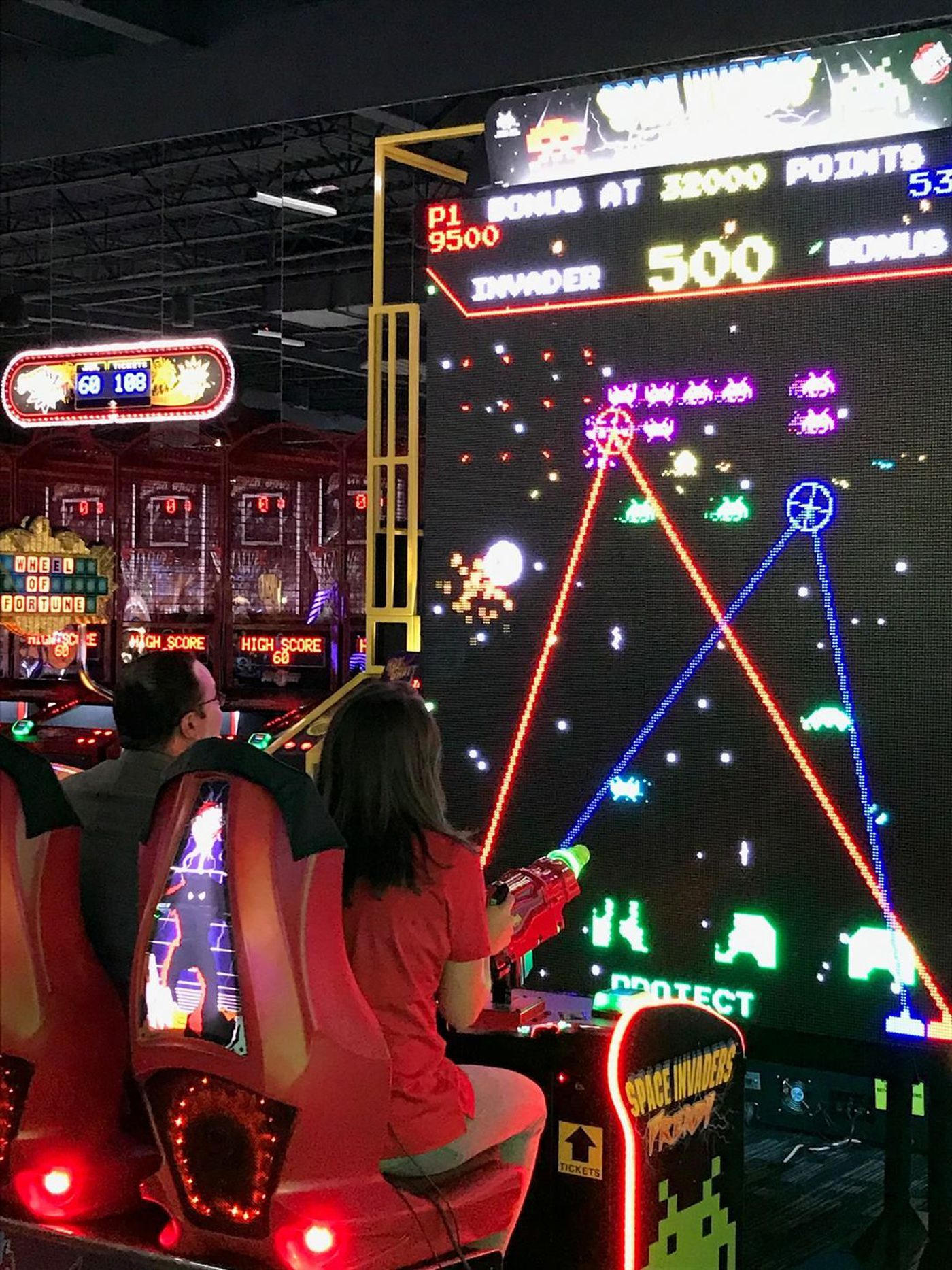 This was my favorite game that we played. It has a huge, beautiful screen. It's space Invaders (which is a marvelous game), but much more hectic. I didn't always understand what was happening on screen, but I enjoyed it. Lots of cool colors, sound effects, etc. We made it through 4 stages. I would be very happy to play this again. I would highly recommend giving this a shot. 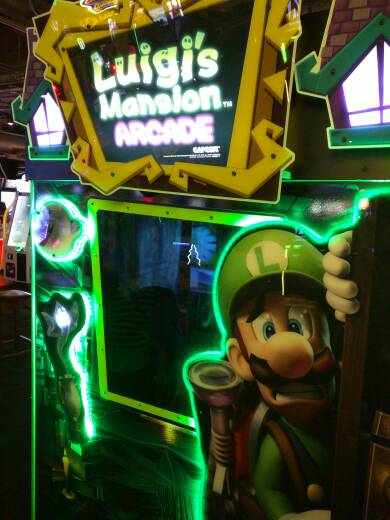 This game was good fun. It's an on rails shooter. But the gun you hold is the vacuum. it's very tactile, You can feel the ghosts getting sucked in. This just worked surprisingly well. I'd play it again. 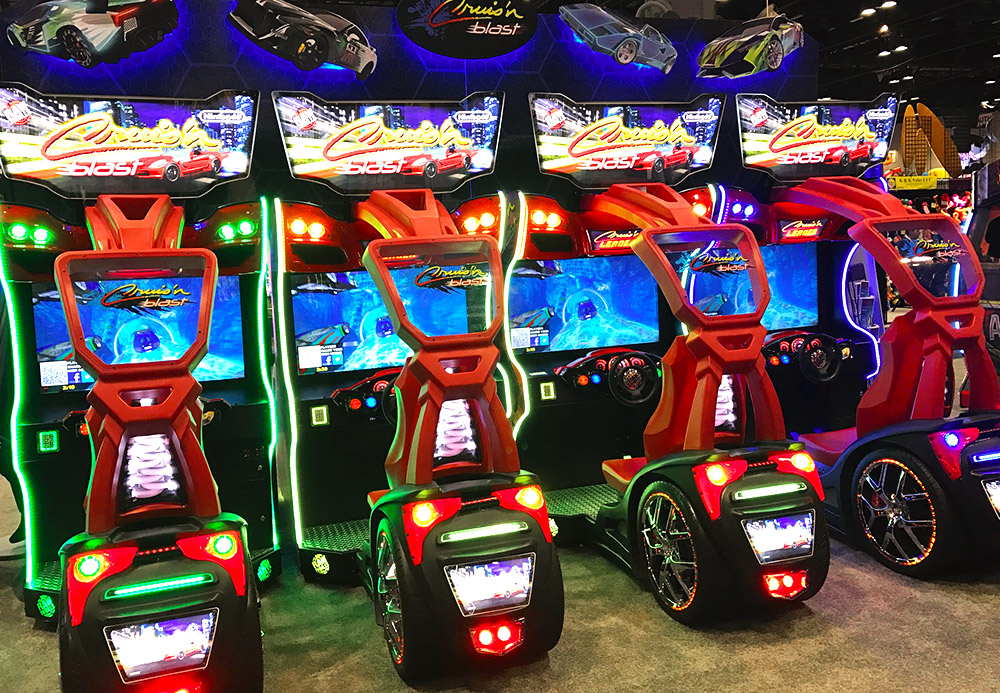 This was my second favorite game. This is just a really arcadey racing game. It has real world (or real world esque) cars, like Lamborghinis. I elected to drive a Hummer. It was just a really fun arcade racer. I would play it again. It would be really fun if you had 4 people in your party I think.

We played a few other things. Flappy Bird (which I suck at). A Spongebob Coin Dozer (that takes an absured amount of credits to play). Skee Ball, which is always a great time. I'd love to have a Skee Ball machine in my own home. We also played a virtual bowling game. You roll a ball like skee ball, and it rolls under the screen at the end of the machine. It then simulates hitting pins. I was very bad at this. My wife was astonishingly good. I got 23 points. She got 223. We played Connect 4, which I won. We played a Centipede game. There's probably a couple other games we played that I'm entirely forgetting and are therefore not worth mentioning!

Let me know if you have any questions about my trip that I can answer. Have you ever been to Dave & Buster's? How was your experience? Tell us below!