Hello and welcome to this week's discussion of The Orville! I'm sorry this one is is late. It was a busy weekend for me and our internet completely crapped out on Friday (which is when I normally watch the show via Hulu).

If you missed last week's, you can find it here. And here is our disclaimer:

We might as well start with the mustache. I love it. I absolutely love it. Bortus rocks the Burt Reynolds look. But now I want him to have a goatee as well. I hope this isn't the last we see of the stache! It was a dumb side plot, but it totally worked for me.

As far as the rest of the episode, I don't even know where to begin.

I'll say that I thoroughly enjoyed myself. This is probably my favorite episode of the series so far. It was very well written and directed. And it was masterfully acted. Penny Johnson Jerald as Dr. Claire Finn and Mark Jackson as Isaaac deserve so much credit for the success of this story. They knocked it out of the park. They're the best actors on the show right now, I think.

The episode is definitely reminiscent of a TNG episode titled "In Theory," in which Data dates a female member of the crew. It does not go well. As he is incapable of understanding emotion, he cannot feel for her and he cannot understand how she feels. He can only use logic and observation to try and make her happy. The girl is fairly naive and she is incapable of viewing Data as anything less than human. I'm sure this is partly due to his physical appearance.

Isaac, on the other hand, doesn't look anything like a human (other than his bipedal structure). Also, Claire is much older and wiser than the girl that dated Data. Claire knows that he can't feel things. But she finds herself feeling for him. He gives her time and attention. He is observant. He helps her and her family. These are all things she appreciates. And over time, she learns that she just really enjoys the time they spend together. So she asks him on a date.

They go to the Symphony. It was such a cool backdrop to have space behind the orchestra. But I was terribly confused at first. There's only a few hundred people on board the ship. How do they have a full orchestra? Thankfully, this was explained. They are the Union's orchestra. They travel around performing for the good people of the Fleet. That's really cool. I like that. And the orchestra was great. They play Singing in the Rain. It's lovely music.

Then Claire and Isaac go out to eat and we have what I found to be the biggest laugh-out-loud moment of the series so far, when Isaac flips the table.

The other hilarious segment was LaMarr and Malloy racing through the ship to tell everyone about the news of Isaac and Claire dating. So great.

I won't describe every beat of the episode. You've seen it. But I really love the rollercoaster of this episode. Early in the episode I thought, "They're gonna bone." But then I was like, "Nah, that's physically impossible." But boy did they show demonstrate how wrong I was. It was really interesting to see Isaac simulated as human. I don't know anything about how their simulation room works, but it's pretty robust it seems. 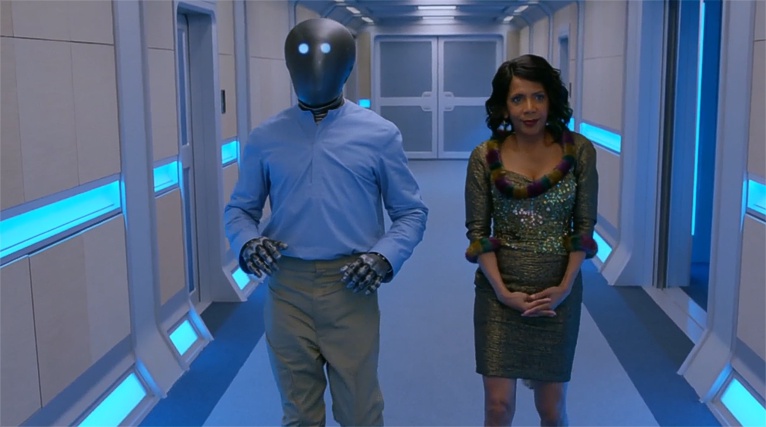 Ultimately, Isaac concludes that he operates more effectively with Claire. This is the best explanation for how a robot could love. It was a stroke of writing genius. The climactic scene of rain on the bridge was corny and delightful and beautiful. I would never have guessed that we'd see pouring rain on the bridge.

This episode was a chick-flick condensed into a 1 hour TV show and it worked in every way. It was some of the best romance I've seen on the small screen. This will absolutely be an episode I watch again in the future.

Oh, and I'm still waiting to learn basically anything about Lt. Keyali.

But what did you think? Share your thoughts with us below!