In Defense of The Incredible Hulk

I've decided to write a blog defending the 2008 film The Incredible Hulk (hereafter referred to as TIH). I consider it to be the most under-rated film of the Marvel Cinematic Universe. It is largely forgotten by the fans and Disney really doesn't recognize it. However, it is part of the canon. It also has a real chance of being the last Hulk film ever. Universal has the rights to make Hulk movies, but Disney owns the character. Fortunately, Disney is comfortable making him an integral part of other movies (see Thor Ragnarok). Given that this film is an important part of the MCU, I would like to highlight a few elements of the film that I really enjoy. Please feel free to discuss your thoughts on the film below.

The first minute of this film is a master-work of efficient story-telling. When this film was being made, the studio referred to is as a "requel." Essentially, It's a sequel to Ang Lee's Hulk film, if that movie were actually a good movie. They wanted to reboot hulk, but they didn't want to retell the origin story. So they made a montage sequence during the opening credits that tells you everything you need to know about the Hulk. You might also be interested in the alternate opening which was featured on the blu-ray release, just for fun.

Many people find the scores of marvel films to be serviceable at best, and for good reason. With the exception of the first Avengers film, most of the marvel movies have utterly forgettable music. I believe that TIH has the most successful score next to the Avengers. The above example is just one piece from the movie, but I think it demonstrates what I mean. I'd recommend giving the whole soundtrack a spin if you want some instrumental music to listen to. 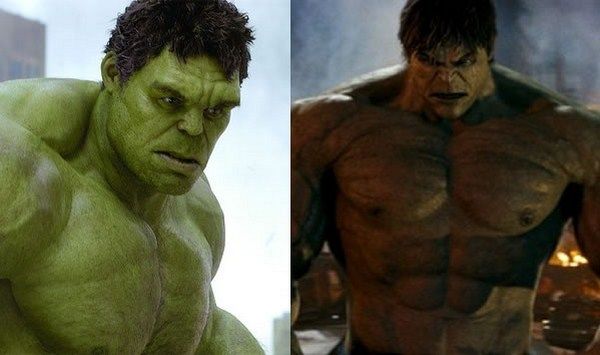 I am in the minority, I know. But I prefer the design of the Hulk's physical appearance in TIH (right) over the Avengers (left). In the Avengers film,  he's made a little bit shorter and his skin is smoother. He still looks great, but there's just not as much detail. I believe this was a conscious decision in order to make it easier, cheaper, and more efficient to animate him in post-production. I certainly understand this decision and don't begrudge it. But look at the detail in TIH. You can see muscle striations. You see veins pulsing. He is just very visceral whenever he appears on screen. He is a truly godlike force. The MCU films have had some phenomenal casting. This one is no exception. I can't think of a better choice for Thunderbolt Ross. I also adore Liv Tyler (though admittedly, she isn't given much to do in this film). Tim Roth is amazing. I also really enjoy Edward Norton. I think he makes a good Bruce Banner. He's not a large person. He's skinny. Scrawny. You would not look at him and think that he possesses world shattering power. They even comment on this in the movie, referring to him as an "unassuming man." I will also quickly mention that I think Mark Ruffalo has been fantastic in the later films. I don't have any problems with the change of actor (especially if Norton is as big an asshole as the rumors say).

This film is very well structured. It has three well defined acts, and each act ends in a fight between Blonsky (the villain) and the Hulk. The first encounter is filmed like a spin-off of Alien. Hulk is kept in shadows and steam. He takes people out one by one in a dark factory. At the end of the fight we get one really clear shot of his face, but we never see a full body shot. The second fight is very different. Blonsky has been given super soldier serum. The military is present in force and is very well prepared with teams, tactics, and weapons. They have a plan. It also takes place in an open field during broad daylight. We get to see Hulk in all his glory. The final fight (which I'll discuss further shortly) takes place at night with two Hulks. Each one of these fight scenes is very different from the other. And they each represent an escalation in the relationship between Blonsky and Hulk.

Directly related to the aforementioned structure is tension. Tension helps pace the film and keep us on our toes when we need to be. Bruce has a pulse meter on his wrist. It starts to beep as his heart rate increases. When his heart rate spikes beyond a certain point, he will transform. Consequentially, much of our time with Bruce is spent keeping his heart rate down. He is in grave danger of transforming at any moment and unleashing destruction. The beeping is very poignant to the audience. It communicates to us what state the character is in and we feel for him immediately. Bruce doesn't have to tell us what state he is in. The beeping tells all.

Every action movie has a final boss. The Abomination is a great one. He's the Hulk, but add intelligence, combat training, fighting instincts, and super soldier serum. On paper, the Hulk is no match. For the first two thirds of the fight, the Abomination has the upper hand. Fortunately, Hulk has practice. He's been the Hulk before. He also has one thing that Blonsky doesn't: love. Cliche, I know. But it works in the context of the film. His love for Betty is the most powerful motivation of all. When she is in danger, Hulk kicks into high gear. We are then introduced to two wonderful abilities that (to my knowledge) have not been shown in film since. He claps and unleashes a hurricane force wind, extinguishing a fire. Then he uses his trademark Hulk Smash, cracking the earth and knocking the Abomination off balance. Of course, the Abomination gets in some great hits of his own. He uses large cement blocks on chains as a flail to great effect. I would also like to highlight that Hulk uses objects in his environment as powerful weapons. He rips a car in half and uses each half as boxing gloves, for example. All around, this film shows what the Hulk is really capable of in combat. I don't feel that any of the other films have done this quite as well (though Ragnarok comes extremely close).

These are some of my thoughts on TIH. It's not a perfect film by any means, but I really enjoy it. What do you think? What do you like and dislike about the film? Do you feel it should remain forgotten, or does it deserve to to be spotlighted?

This blog was sort of a dry-run. I'm planning on writing a similar blog in the future for a film that will likely make you pull out the torches and pitchforks (or at least your best snide remarks). So look forward to that! Feel free to give me any feedback about this blog itself (structure, examples, arguments, etc.).