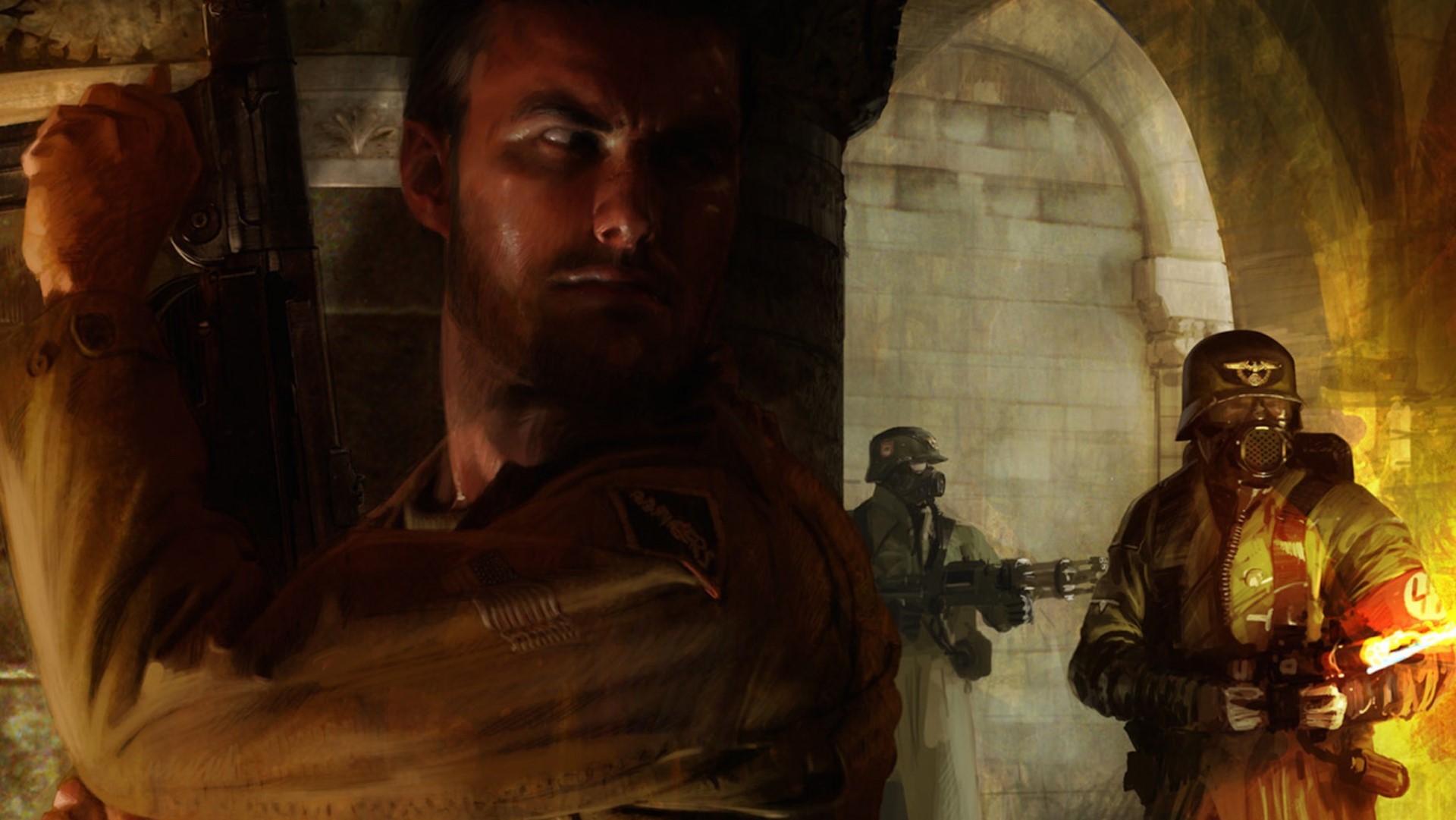 After the release of Spear of Destiny, the Wolfenstein series took a near-decade hiatus. Just as the name states, Return to Castle Wolfenstein is a return to this franchise but with all the bells and whistles of shooters at that time. What that means for this franchise is an evolutionary step for B.J. Blazkowicz, and one with more room for story, new gameplay mechanics, and identity. Here is my ranking of Return to Castle Wolfenstein. As always, you can find the rank itself at the bottom.

No one can deny the importance of Wolfenstein 3D, but I think it’s with this game where the series begins to find its own. Wolf 3D is great and all as a piece of innovation, but it isn’t the best game to play as it’s very simple in its mechanics and gets both repetitive and frustrating pretty fast. Return to Castle Wolfenstein, however, is an early 2000s shooter, and while it may be simple in today’s terms, it’s still leagues ahead of the last two games in terms of, well, just about everything. Simply put, Return to Castle Wolfenstein is the first game in the series to truly have a story, world, and identity; and while it may not have the importance of Wolfenstein 3D, it is in my opinion a better game.

Normally I would start with story or combat by this point, but I think the environments and levels are worth talking about first because this game actually has something recognizable. The previous two games have one-off maze levels with neon colored walls and occasional décor that I found frustrating, confusing, and even at times nauseating. This game actually has recognizable environments and connected levels that feels like a real place rather than a bunch of disjointed levels. The environments use realistic textures and colors to convey locations such as the castle, a town, underground catacombs, and more. The environments also feel more densely populated with environmental objects like décor and furniture, and a surprising amount of it is interactable. Levels have verticality and solid level design as each level flows well and don’t just feel like a series of boxy rooms. Secret rooms feel like actual secrets with secret environmental levers and doorways hiding these rooms rather than an interactable wall. Even with all of the new, though, some of the old can still be found here such as similar pickups, level stats at the end, and a whole lot of doors to open. In just about every way imaginable, the levels in this game are better from aesthetics to design while still calling back to the games of old. 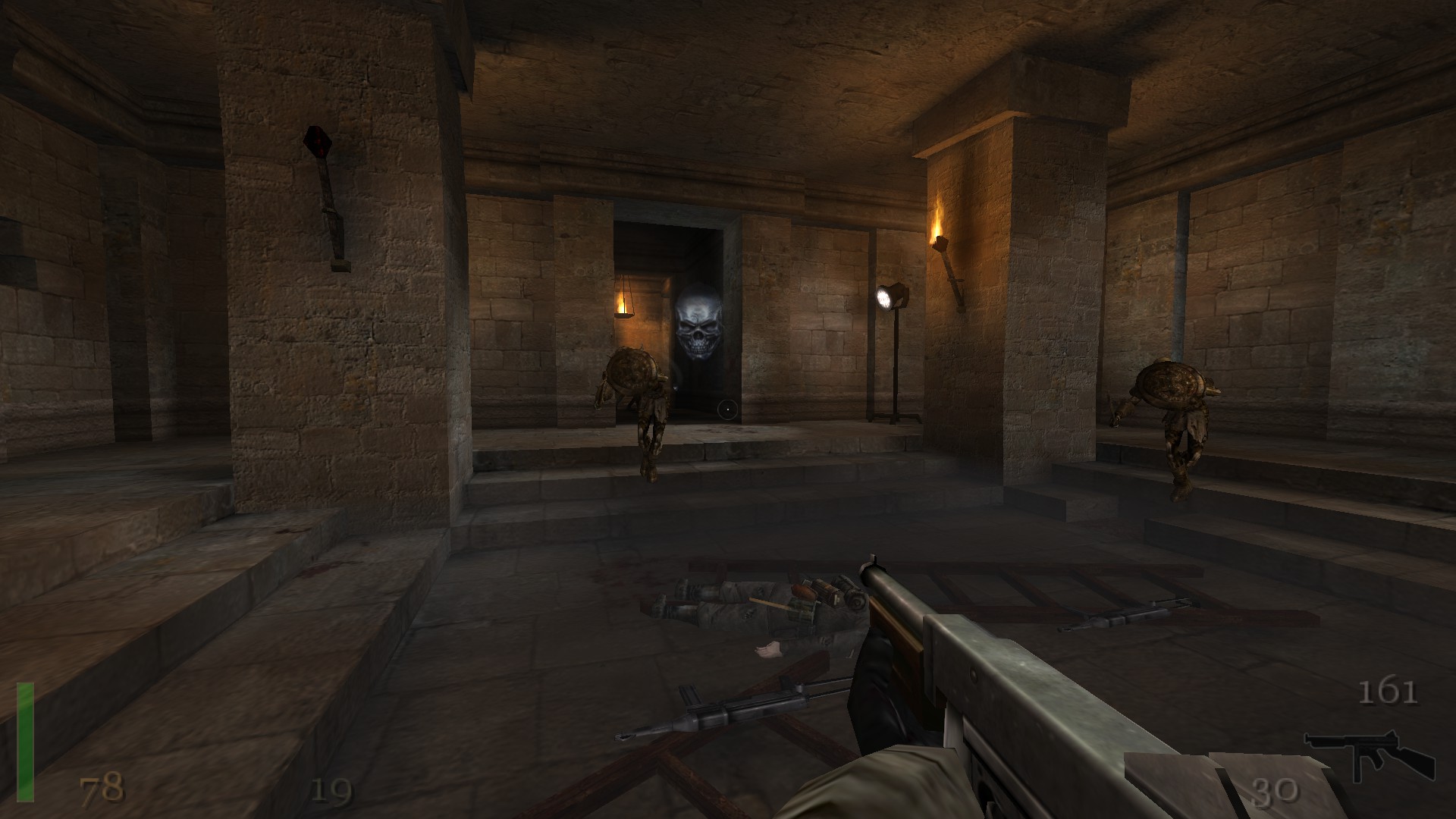 The catacombs give Indiana Jones vibes.

Complementing these environments is a story which, while basic, still is more than what the previous two games have to offer. The story follows B.J. Blazkowicz as he foils the plans of a Nazi paranormal and science divisions’ attempt of creating a supernatural army. There are some new story elements in this game like cutscenes and dialogue, but none of it particularly stands out. More than anything though, Return to Castle Wolfenstein has given the series an identity as an alternate-WW2 game with a bit of a darker undertone that explores a more fantastical side of the war such as scientific abominations and occult beliefs. Sure, one could argue that the previous two games also have these elements with the Spear of Destiny or zombie-like enemies, but I think this game really cements the series’ identity thanks to the story and environments.

Speaking of drastic changes, combat has also seen some major renovations. Gone are the retro shooter days of the weapon residing in the middle of the screen with only horizontal aiming, and in are the modern shooter days of an off-center weapon, reloading, 3D aiming, and so on. Weapons also have more definition, as the simple ‘machine gun’ or ‘pistol’ are instead replaced by a variety of WW2 weapons and throwables. These weapons range from the classics like the MP40 and Colt M1911 to some fictional weapons like a Tesla gun or a sniper rifle with an infrared scope. All the weapons here are either classic weapons seen in other WW2 shooters or a basic science fiction weapon like a gun that shoots lightning, but it’s certainly better than the older Wolfenstein games. There is also a decent variety of enemy types ranging from traditional soldiers to Frankenstein-esque creatures. Again, nothing that hasn’t been done in other games before, but for this series it’s new and fresh.

Beyond just new weapons and enemies, combat and gameplay as a whole has a variety of changes. Armor is now an available pickup, which helps. The game offers the option to lean, though you cannot shoot while leaning which sucks. There are quick saves, which would’ve been nice in the past two games, but I see this as a positive for this game rather than a negative for the last two. There are less boss fights and they are as equally boring as the last two games, but the bosses are a bit more fleshed out with some unique attacks (though they ultimately don’t compare to the sheer memorability of seeing Hitler in a mech suit). And ultimately, combat difficulty has more of a natural progression throughout the game with tougher enemies and better weapons showing up later on. Combat isn’t perfect as throwing grenades is abysmal, moving while aiming with a sniper scope is finnicky, and it would be nice to lean and shoot, but overall the combat in this game has major improvements over the last two. 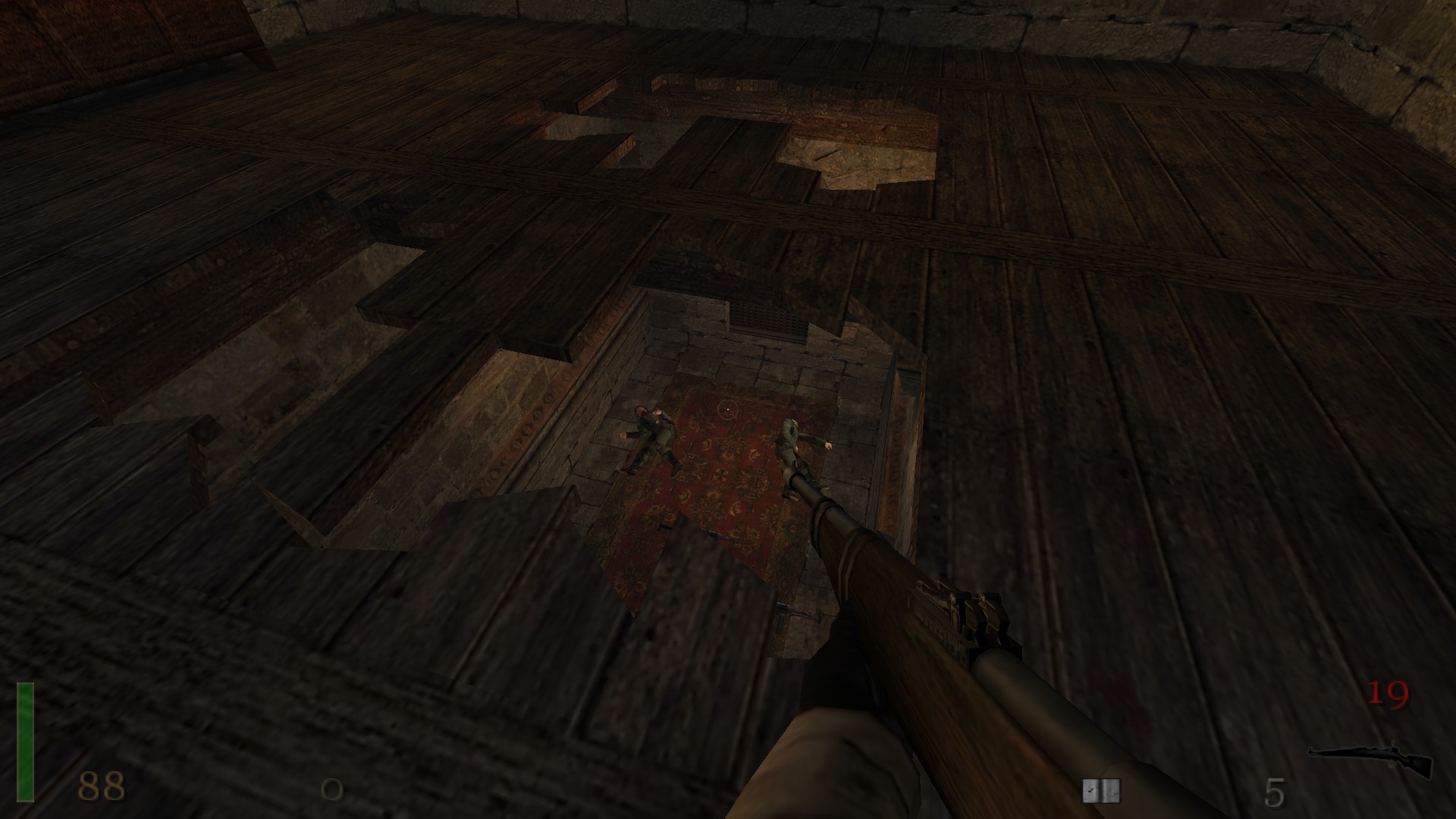 A vertical surprise attack. Sounds goofy, but it is something new for this series.

While the game as a whole is overall a lot better, where things fall apart is the stealth. While the last two games don’t have stealth, the two games before those do, and the whole ‘infiltration’ tone to this series makes stealth seem like the most sensible addition to this game. This game has more traditional shooter stealth unlike the original two games, but the stealth here just straight up sucks. There are a few silenced weapons as well as alarm boxes that can be destroyed, and it’s cool to be able to stealth kill through a few enemies, but it feels like the game forgot to implement all the other basic stealth elements like alert statuses or instantly alerted enemies without a radio. In other words, stealth is essentially impossible, which sucks because it would’ve been fun to dabble with it in this game. It also makes leaning pointless because leaning can only effectively be used in stealth, and stealth can effectively be used nowhere. Where this really sucks, though, is that there are one or two forced stealth levels. There is a neat part where you have to follow a specific track to not get spotted, but being forced to stealth in a game so inadequately equipped with stealth mechanics was quite miserable for me.

Even with bad stealth though, Return to Castle Wolfenstein is a standout game. While it may not be as much of an important or influential release as Wolfenstein 3D, I believe it is very influential in giving the series an identity. More than that, I enjoyed playing this game a lot more than any of the previous games, and for that reason I’m putting this game in the number one spot on my list.

P.S. I had trouble trying to get into a match for Wolfenstein: Enemy Territory, and I decided I’m going to skip Wolfenstein RPG, so the next game I’ll be covering is 2009’s Wolfenstein.