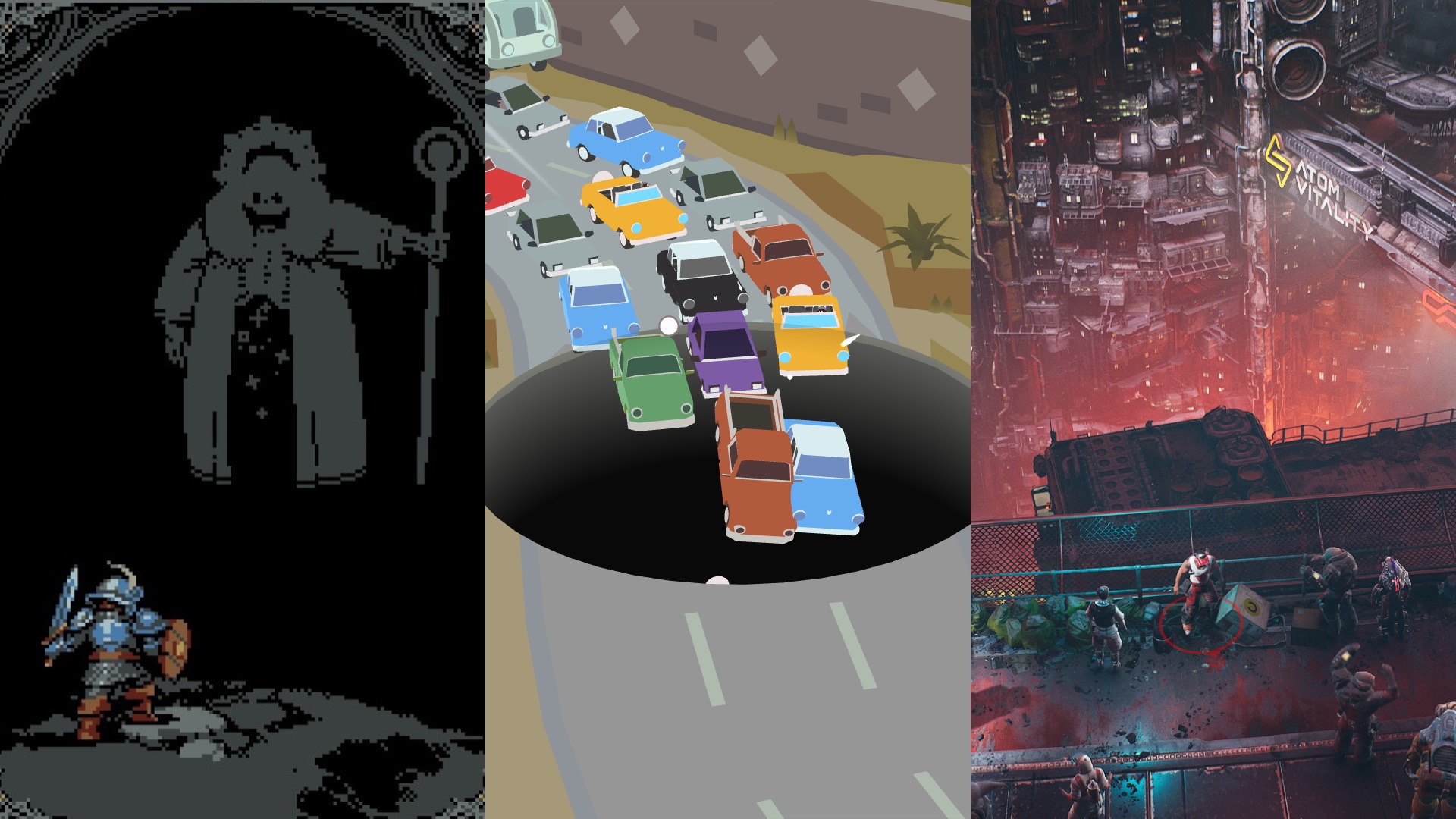 Loop Hero by Four Quarters is a unique game about a hero trying to save a world plunged into darkness.

Normally I would say the genre of the game in its description, but Loop Hero isn’t an easy game to describe with a single genre term. How the game works is the hero walks along a generated track. As the hero walks along, he kills enemies who drop cards ranging from enemy tile cards to place more enemies to environmental cards that provide stat boosts and resources, and more. Whenever the day meter fills up, more enemies spawn, and whenever the hero completes a loop, he can either leave with the resources he’s picked up or continue going, though the enemies get harder with each completed loop. Once enough cards are placed, a boss spawns, and beating the boss will advance the game to the next level. Outside of the game, resources can be spent on rebuilding a town, which in-turn will open up new gameplay mechanics, unlock new cards, and improve the hero.

Even my description of the game doesn’t do it justice, but that is one of the many things I love about this game. It’s unique and feels fresh, and the ways this game rethinks strategy is super cool. Where other games would put the strategy into the combat, a lot of the strategy of this game is with creating the right card deck and building up the level. While you are the hero, you are also the puppet master throwing obstacles in his way, and the game is about trying to throw enough obstacles in the way for more and better loot while not throwing too many obstacles in the way to the point of defeat.

The strategy of the game goes well beyond that though, as the cards have a lot more to them than what meets the eye. There are various card combinations to be found, like for example putting a village card (which offers a health boost when passing by it) next to a vampire spawn will turn the village into a ransacked village (which spawns ghouls), but after looping three times, it will turn the village into Count’s Land, which offers more health. There are so many card synergies and hidden effects, that I don’t even think all of them have been found yet. Terrain cards, which offer boosts to various stats, can play into entire different builds and strategies. As you hit harder levels, each enemy type adds on more modifiers rather than just a basic health and damage upgrade, and trying to build a deck around that is fascinating. I could go on and on about the strategy, but the main takeaway I want to offer is that this game offers something unlike anything you’ve played, and the ways this game layers on new obstacles and new ways around them is super cool.

Outside of the main game, resources earned within the game are spent on rebuilding a town. Each building is significant in what it has to offer, and I always found myself anticipating each building and what it would do for me. Whether it be new cards that could significantly change the strategy of the game or new mechanics to layer on such as an in-run leveling system, each building felt exciting. There is a point in the game where it does get grindy as the buildings get to be pretty expensive, but going back to previous levels and grinding is actually a lot of fun because each resource in this game requires a specific way of unlocking it, and I found myself building different decks for the different resources I needed. Orbs of Expansion, for example, have a chance of dropping when fighting four or more enemies in a single tile, so I built a deck that focused on weaker enemies and cards that would spawn more of them to maximize my chances of getting Orbs. On top of all this, the buildings are worth trying to unlock because of how significant they are, so at least the grind is worthwhile.

The most important unlock in my opinion are the class unlocks. There are three classes in the game: warrior, rogue, and necromancer. Each carry different equipment, focus on different stats, and fight in different ways. What’s neat about the character types beyond their differences, though, is how I built decks around them. Each character feels like a different way of playing, and experimenting with their playstyles highlighted how solid the other systems are in the game.

While I found a lot to love about this game, I also did find a few setbacks. The biggest issue I ran into was a lack of player agency, as I found not being able to control combat, potion use, and card order in my deck a bit frustrating. Also, I think the game could do a little bit more clarity like having a log of all tile combos, whether or not settlement placements matter, what certain symbols on the map mean, and overall better onboarding. As I played, I started to appreciate some of the game’s obscurity, but I also think more could’ve been done to better explain the game as I can see some of its complexity being a turn off for those who don’t put in the time.

Loop Hero is one of the most innovative, interesting, and fun games I’ve played in quite some time. The way it flips strategy on its head is an absolute blast, and I think it does an excellent job at making significant changes to the strategy and enemies as the game progresses. It does falter a bit with player agency, but most of the fun is in crafting the world rather than in fighting it. I highly recommend this game to anyone looking for a fresh indie experience or a unique take on strategy.

Donut County is a puzzle game about opening up a hole in the ground and swallowing everything in the level. As the hole consumes more and more of the area, it grows larger to consume larger objects. In between these levels, the game spends time with a small cast of characters stuck hundreds of feet below the Earth trying to find a way out.

Donut County is a great game for just chilling out and playing in one sitting, which I think makes it perfect for Game Pass (which is where I played it). At most, there are some pretty simple puzzles to solve and a weird boss fight at the end, but this game really is just about moving a hole around the level and swallowing everything, which I found fun and relaxing. On top of its relaxing gameplay is a great soundtrack and art style that lends well to its strange premise and even stranger cast of characters. Speaking of which, while I wasn’t particularly grabbed by its story, I did find the game’s cast of characters and their dialogue interesting and realistic in a way that few other games manage to capture.

I don’t really have a lot to talk about with this game, but that’s perfectly fine by me. I enjoyed this game as a little diversion from the other games I’m playing and the other things I’m doing in my life, and I would recommend this to someone looking for a one-sitting break from everything.

The Ascent by Neon Giant is a top-down cyberpunk shooter about a world where one of the mega-corporations goes belly-up, leaving people under its control to fend for themselves.

Initially, this game hit on all cylinders for me. The controls are tight, the combat is on cooldowns and unlimited ammo which eliminates the tedium of scavenging around for supplies, and this game handles leveling in a different and better way than a looter shooter by only having the character level dictate enemy difficulty rather than the character and the weapon. Where this game truly shines, however, is in its world, as I think this game manages to capture the density, verticality, and grunginess of a cyberpunk world better than most. This feeling translates well into its gameplay, as exploring this world is seamless and I enjoyed diving into every nook and cranny the hub cities had to offer.

As the hours rolled on, however, I found myself increasingly bored with the title. The combat, while tight, is rather basic, and I didn’t feel any of the various abilities to equip were anything unique despite the cyberpunk setting allowing for a lot of room for creativity. While I enjoyed not having to deal with the tedium of constantly switching around looter shooter weapons, I still found some of the negative aspects of looter shooters still there such as bullet spongy enemies. Leveling up is dull, as skill points are put into minor stat buffs. The missions became very mechanical, and I lost all interest in the story. Even navigating the city became boring, as the game asks for a lot of walking and the waypoint marker was fiddly for me. Finally, I ran into a fair amount of technical issues (I played on the Game Pass for PC version), and I even hit a point where I had to stop playing for awhile because the game was running at single-digit frames.

After putting some time into the game (I’m guessing around 6-8 hours), I decided to stop playing. Maybe the game gets more exciting later on, but I didn’t care enough to keep going. The Ascent has promise, and there are certain parts to the game that the developers nail, but I found myself bored with the game, and it didn’t take much for me to lose patience with its shortcomings. I’m sure there are those who will play and enjoy this game, but this game isn’t for me.