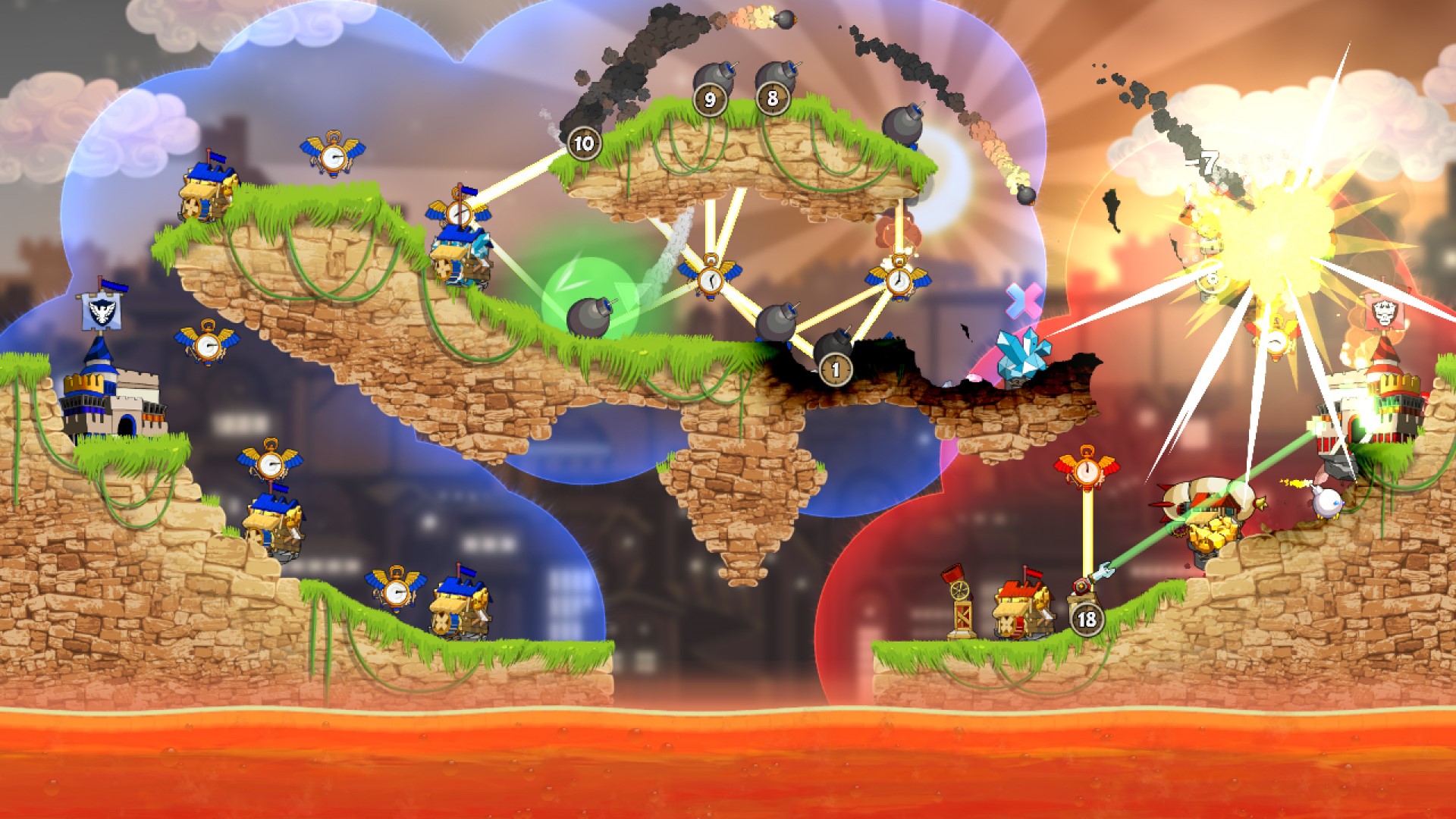 For me, artillery games are a very early childhood memory rooted in Flash. Launching cannon shots and chunking away at the terrain has been around for a surprisingly long time in video games, and Cannon Brawl takes that formula and changes it up by injecting real-time-strategy elements into the mix. All of it blends well and the game is fun when it all works together, but if the conditions aren’t right then the whole thing can fall apart.

How Cannon Brawl works is that two sides have castle, and the goal is to destroy the opponent’s castle whether that be through damage or making it fall through the ground. To do this, you fly an airship around the map and spawn various structures like weapons, shields, mines for money, and so on to take out enemy turrets and their castle. Where most other games of this nature are turn-based, however, this game runs at real-time, so all of it plays at a much faster pace.

The main part of this game is the Adventure mode, which is a twenty mission singleplayer campaign that essentially acts as a giant tutorial going through the functions of each new structure. I first started with this mode, and I had a blast with the game. Not only does the real-time nature of the game mean a faster pace, but each turret needs to be manually operated, which makes the experience hectic but in a fun way. Also, structures can only be built within a certain area that can only be expanded by building more structures or purchasing territorial floats, so the game is just as much about managing space as it is attacking enemies. On top of all this, the terrain is destructible, so all of that can change up the meta too. The basic structure of the game is a lot of fun as it takes the traditional artillery formula and makes it faster paced and more engaging. 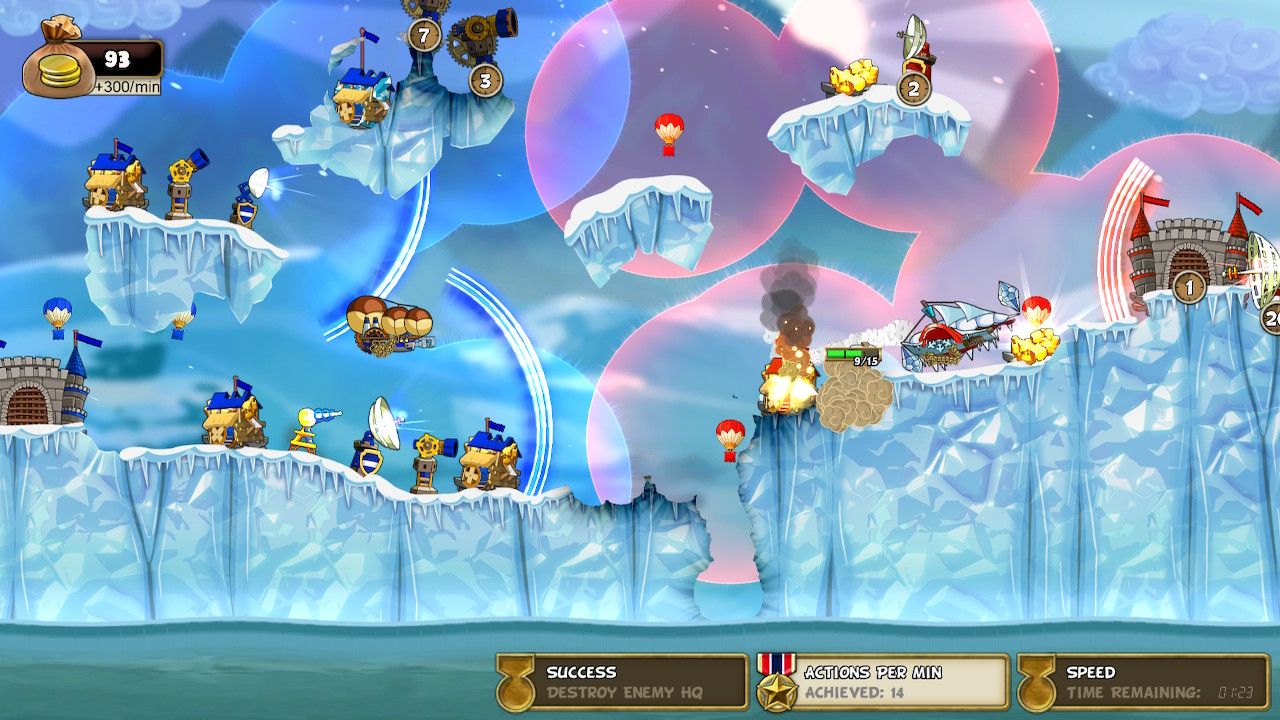 When this game is hitting on all cylinders, it can be a frantic but enjoyable game about managing cooldowns and causing as much destruction as humanly possible.

As I made my way through the campaign, I started learning about more of the structures. Some of the structures include multiple types of money generators, various weapons, a shield for blocking projectiles, a repair device to repair structures, drills and a terraforming cannon for destroying and rebuilding the terrain, multiple types of territorial floats for area expansion, and more. Not only do the weapons add variety, but a lot of them are balanced in a way that can be countered by other structures. The shield for example is good at blocking lasers and cannons, but bombs can walk through shields, and bombs can be stopped by digging a hole in the terrain with a laser or a drill, and so on. To add onto the different strategies are different characters with different abilities. One can slowly repair structures, one has faster cooldown times, one generates a shield for taking out projectiles, and more. The characters don’t feel like they drastically change the dynamic of the fight as much as the structures do, but they do add variety and can offer a little extra oomph to a fight that I found enjoyable without being too overpowered. Learning what goes good against what and trying to create a build that can counter enemies is a lot of fun in the early hours, but it does also lead to where I had the most issues with the game.

While the structures are fun at first, some of the structures later on in the game prove to be troublesome. For starters, as the new structure unlocks began to pile on, I found myself wanting more item slots. The game only allows five slots for structures, and I think adding one or two more would’ve been nice as I think that would allow for better strategy and counters to enemy structures. While I like most of the structures, one of the structures that they introduce nearly broke the experience for me, and it’s one that simply can’t be ignored because of its impact. The bank generates money and can be used to bribe enemy structures by sending money its way. Do enough bribing, and that structure is yours. It’s a neat mechanic to see in this game, but it’s one that can be easily spammed and broken. Structures that are being bribed can’t be countered bribed and will not lose its bribe money meter, and the only way to counter this move is by either destroying their bank or upgrading the structure to increase its bribe capacity. The level after this was introduced proved why this mechanic isn’t as great as it sounds, as the enemy just spammed banks and the level mostly consisted of bribes, which at best is boring. Fortunately, it was just the one level where it was used, but this mechanic can still be used by others and is enough of a game-changer type ability that I can see a fun game with friends devolving into bribing tedium and frustration.

The Adventure mode only consists of twenty main levels, but the fun doesn’t stop there. Each level has three medals to earn based on speed, completion, and actions done per minute, so there is always going back and snagging up all those for completion. There’s also a handful of puzzle levels to complete that are simple but fun levels about solving a combat puzzle rather than trying to win with strategy. Once the main levels are complete, a second campaign opens up that is essentially all of the same levels as the first campaign but with harder enemies and unrestricted structures. I personally completed the adventure mode, the puzzle levels, and a few of the second campaign levels and decided to end there because I was content with what I had played, but completionists and those who really get into it will find a good chunk of game to get out of the Adventure mode. 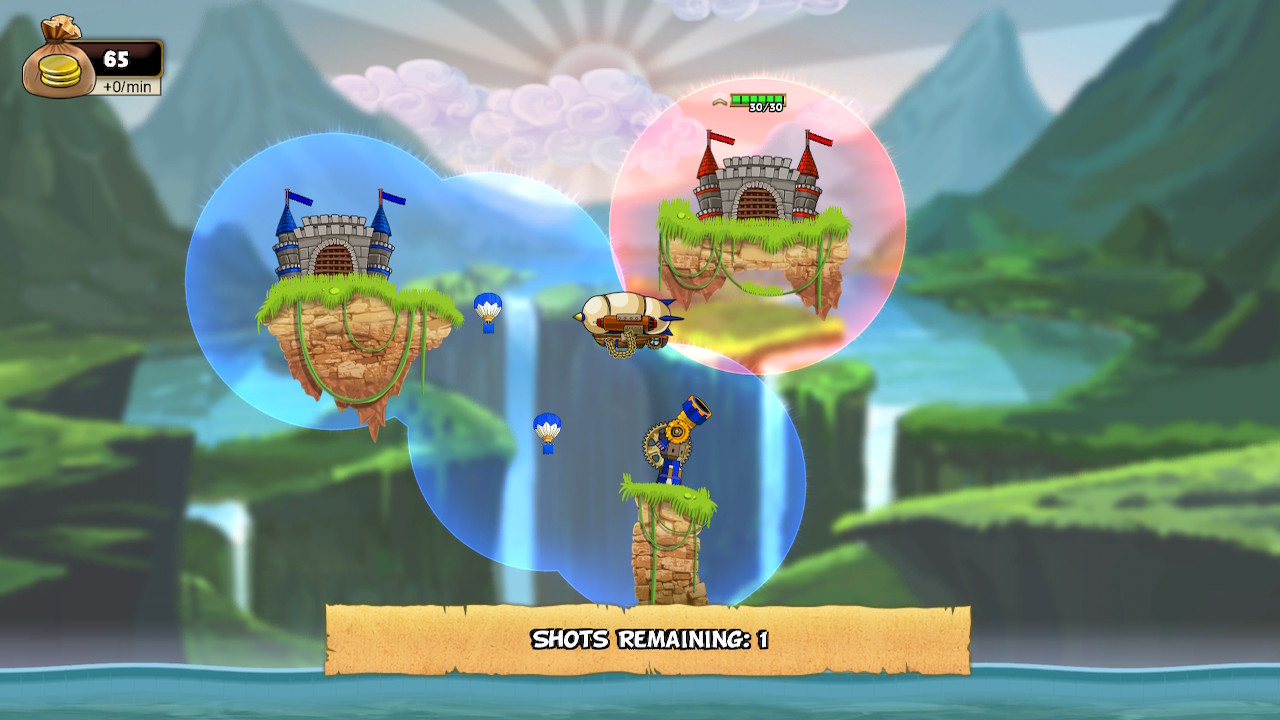 The puzzle levels aren’t anything crazy, but they are still pretty fun.

Outside of the Adventure mode, the other modes are all about battling it out with others. There is battle against AI, in which you get to choose a map from the Adventure mode (or a random map) and choose the AI difficulty, local multiplayer, online multiplayer, and wireless multiplayer. I only tried out battle against AI as I do not have Switch Online and I don’t have anyone else to play with in regards to wireless or local, but I’m going to take a guess that the experience that I had with AI is going to be about the same as the others but with real players. I have no complaints with the basic functionalities that are available with AI battles, and xp (which is a currency used for unlocking new characters and structures) can still be earned both here and in the Adventure mode, but I wish there was a little bit more customization for the AI battles. It would be fun to screw around with modifiers and whatnot, but what’s there is fine.

I think my biggest issue with these other modes is playing with others. I think it would be a lot of fun to play with friends, and this game feels right at home with Switch and the ability for another friend to play on a Joy-con, but I also think that other friend needs to be well-versed with the game. The controls are simple enough, but the strategies aren’t, and someone else going into this experience without knowing the functionalities and counters of the structures wouldn’t be fair against someone who does. Even if both players are new to the experience, I think it would be a case of the two not knowing what exactly to do or how it works and only being able to enjoy the game at surface level. None of the strategies are too complex, and I think at least some of it can be taught fast, but I also think there is enough of a stop-gap there to where I would rather recommend another game that’s easier for a new player to jump into.

In the end, Cannon Brawl is a fun game that takes a classic genre and adds an interesting twist to it, but I found myself enamored by it for only so long. I had a fun time making my way through the Adventure mode, and I think you can have a fun day or two with a friend who is equally invested into the experience, but I also think it isn’t the best for playing with others who don’t have an equal investment level and I don’t think this game will be your next multiplayer addiction. Still, I think its price of $10 on the Switch eShop is fair, and I would recommend the game to those looking for a small but interesting take on a strategy game.