My Experience with The Wind Waker: Part One

The Legend of Zelda is probably my favorite series in gaming. The gameplay, music, and sense of adventure featured in the series are some of the best in gaming. In the months leading up to every new release in the series, I am always hyped up and ready to embark on another adventure. I watch the E3 trailers and demos more times than I can count and more often than not pick up the game on day one. Yet, for years, there has been one entry that has eluded me: The Wind Waker.

I have played almost every console Zelda game, but Wind Waker somehow fell through the cracks and I did not play it until fall of 2013. I went into the game mostly blind, with little knowledge of the game and came out of the game with it as one of my favorite titles in the Zelda series.

In part one of this blog, I will briefly go into my history with the Zelda series and how I came to finally play The Wind Waker before giving some of my thoughts on the game, on its music most of all. In part two, I will go into some of my personal thoughts and emotions I experienced during and after playing The Wind Waker.

My History with the Zelda Series

I am too young to have played the first few Zelda games upon their initial release. My first home console as a kid was the Nintendo 64, which I loved to death. I played most of the major releases during the console’s lifecycle, yet, somehow, I didn’t know about the Zelda series until much later. I played Super Smash Bros. and had a blast playing with family and friends. My favorite character to play as was Link (and still is). Around 2004, a friend of mine told me about this great game he had bought at a consignment sale called Ocarina of Time. He talked about the vast worlds to explore and how much fun it was. I knew I had to play it, so I picked up a copy that fall, ten years ago. I fell in love with the immersive adventure, the challenging dungeons, and experienced a great sense of accomplishment after I defeated Ganondorf and saved Hyrule.

At the time, our then-current home video game system was the Playstation 2. I vaguely knew about the Gamecube, but had little experience with it outside of a few demo stations in stores. The controversy of the Zelda teaser and Wind Waker’s graphics completely passed me by. With the release of the Wii, the primary game that drew me in was Twilight Princess. I yearned for another gaming adventure like the one I had embarked on a few years before and waited patiently for the chance to play. Since then, I’ve picked up some of the previous games in the series and kept up with newer releases. I picked up Majora’s Mask and A Link to the Past at different points over the years and enjoyed both, but still only had vague knowledge of Wind Waker.

In May of 2012, I attended the Symphony of the Goddesses concert in Atlanta, Georgia, on one of the early stretches of the Zelda 25th Anniversary concert tour. I’ve loved music in video games for as long as I can remember, with Zelda music near the top. I can honestly say that that concert was one of the finest I have attended. Perhaps almost as good as the beautifully orchestrated music itself was the audience. You could tell that everyone in attendance loved the Zelda series and was thrilled to be there. I saw tons of people cosplaying in impressive costumes and collected dozens of StreetPass hits that day.

So, perhaps the first thing that drew me into Wind Waker was the music. Before the concert, I had listened to the Concert CD packed in with Skyward Sword many times and loved the orchestrations and medleys of such great music. The Wind Waker medley in particular was one of my favorites, as much of it sounded so epic, like an adventure just waiting for me.

Having never had a Gamecube, I wanted to check out some of the gems I had missed over the years. I knew that the system had a legion of fans and wanted to know what I was missing. So, using the backwards compatibility of the Wii, I picked up a memory card, controller, and copy of Wind Waker. Satiating my inner collector, I found a black label copy in great condition with all the inserts still inside. Less than an hour into the game, I realized the controller’s c-stick didn’t work and had to exchange it for one that worked. Finally, I was ready to embark on a Zelda adventure I had missed out on for so long. It met and surpassed my expectations and is now one of my favorite titles in the series.

Even from the startup screen, I knew I was in for a good time. I fell in love with the title screen’s music and often sat and let the title run its course just listening to the music. I loved the upbeat but subdued nature of the tune; it began simple, yet added further instrumentation to create a relaxed, yet stirring song. I loved how, as the tune progressed, more instruments are added, before culminating in the appearance of strings. The harmony was simple, yet held so much power, as if preparing you for the journey to come.

And, the song did. I loved how the title tune was incorporated into the latter half of the game with Medli and Makar’s tunes, with the Earth God’s Lyric incorporating the melody from the intro and the Wind God’s Aria incorporating the harmony. Medli’s Prayer, in particular, is one of my favorite pieces from the game, simply because of how peaceful and relaxing it is, especially when it first hit me that it was the intro theme. I would love to hear this theme played with an actual harp and backing vocals. 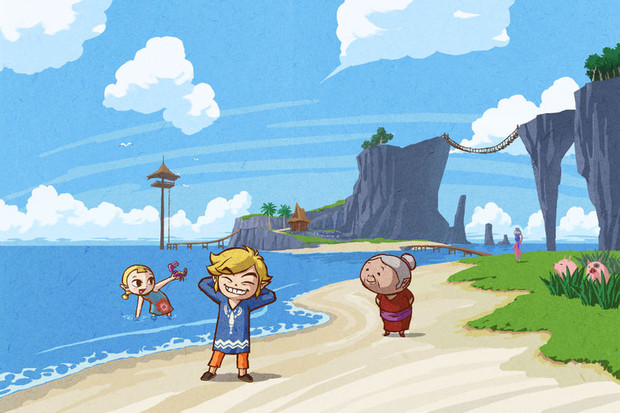 One of my favorite pieces in the game is the Outset Island theme. It perfectly sets the stage for a peaceful community and the carefree, happy childhood that Link enjoyed before the start of his adventure. With this theme playing, running around the small island was a happy occasion, as you were devoid of responsibility and could simply enjoy yourself. I also liked the nice touch of hearing a few lines of the Kokiri Forest theme from Ocarina of Time incorporated into the theme. With the sounds of the waves and the wild pigs running about, the music created a relaxed, beautiful moment. 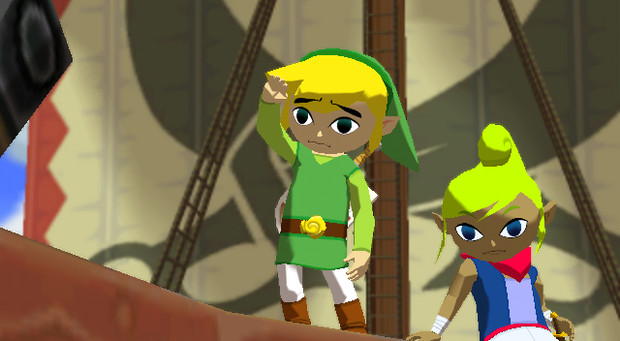 This, of course, couldn’t last.

With Aryll captured and Link dedicated to bringing her back, it was obvious that he had to leave. The Departure theme perfectly captures the emotion of the scene as Link leaves his home, the only place he has ever known, behind. It feels heroic, yet has a decidedly subdued and sad tone at times. Adventure and challenges will follow and Link still feels apprehensive about leaving. He knows that his grandmother will be alone, and watches her from the ship as it departs.

All of this culminates in the Ocean theme, announcing that the adventure has arrived in full swing. While some have complained about the size of the Great Ocean and the relative lack of sights in it, I really enjoyed exploring the ocean and often hummed the theme while traversing it. It was really fun discovering small outcroppings of rock or new islands to explore.

I had also heard plenty of complaints about the length of the Triforce shard quest, but it honestly didn’t bother me that much. With the way the game showers players with rupees, I had no problem paying Tingle.

On the subject of Wind Waker’s graphics, of which there has been so much debate over the years, I honestly have no complaints. I loved the cel-shaded graphics. The HD remaster was released almost at the same time as I picked up the Gamecube version and I didn’t think that it really needed it. Sure, the remaster looks great, but the cel-shaded graphics still hold up very well today. I loved all the little expressions Link made during the game and how subtle the emotions could be.