A Look at Video Game Ads of the Past: Atari & Friends

Typically, when I think of advertisements, I think of loud and intrusive commercials for things I don’t want, all vying for my attention. When watching a video online, I can’t wait to click to skip an ad to get to where I was going in the first place. When watching TV, the commercial break is a chance to get up and grab some snacks. When listening to the radio, there might be a good 10-15 minutes straight of often ridiculous commercials when all I want to do is listen to music.

However, when looking at advertisements of the past, I often go out of my way to find them; I find that I actually enjoy them. When flipping through old magazines or rewatching tapes of TV broadcasts, I sometimes go straight for the ads; there is just something about advertisements of the past that fascinate me, especially ads from my own childhood or ads with products I remembered and enjoyed. Ads from the past often have a characteristic style that makes it immediately clear which decade they came from. Lingo changes over time, so ads from the past that tried to cater to youth culture often sound silly or warmly endearing today. As a fan of both video games and history, I have often been interested in ads and merchandise relating to games from the past, of how classic games were marketed back in the day.

So, for my first series at Destructoid, I want to guide you through some ads from the past, particularly in the area of video games. Recently, I began sifting through old magazines and comics from the 2000’s, searching solely for ads I had remembered from the past. Continuing on from there, I went back further, looking for ads from the 90’s and into the 80’s. I had a blast looking at these ads and wanted to share these great pieces of history with the Destructoid community.

This series will showcase video game advertisements from the Atari 2600 through to the GameCube, giving readers a glimpse at how some classic and not-so-classic games from the past were advertised to kids in print materials. These ads were pulled from comics and magazines in my possession, ranging from the early 80’s to the mid 2000’s. In the process of putting this series together, I have already scanned well over two hundred video game ads, with many more still to go.

This series will be divided up by video game system and proceed as follows:

1. Game systems of the early to mid 80’s, including the Atari family of systems and the Intellivision. My collection of comics does not extend very far into this time period, so this section will be somewhat smaller than those to come.

2. NES. The number of ads I have for the NES outshines all others by a wide margin, so this section may be divided up into more than one entry, simply due to bulk. There will be ads for the system itself, the games, plus merchandise and peripherals. Whether you played the NES as a kid or have never experienced its games before, be prepared for some totally radical ads.

3. Sega’s systems over the years, mainly focusing on the Genesis/Mega Drive, though there will be a few ads for the Master System, Game Gear, Sega CD, and Dreamcast.

4. SNES. Some ads feature multiplatform games between the SNES and Genesis. With those ads, I will distribute them between this and the Sega entry.

5. The Game Boy, from the original through to the Game Boy Color. This series contains over a decade’s worth of great ads.

6. The original Playstation. I didn’t come across many ads for the system, so this might be the shortest segment. However, quality triumphs over quantity here, as some great games are featured.

7. The Nintendo 64, with ads, contests, and a select number of articles taken from issues of Nintendo Power and assorted other magazines. For fans who grew up with the system like I did, this will be an entry not to be missed.

8. This entry is dedicated entirely to Pokémon, featuring ads for the games, trading cards, movies, and a deluge of merchandise. This will range from the Pokémania of the late 90’s to the third generation of games.

9. The final entry on gaming will focus on GameCube and Game Boy Advance games.

10. Lastly, this final entry will feature ads not related to gaming, but ones I thought the community would enjoy. When going through twenty five years of print media, I came across plenty of interesting and nostalgia-inducing ads. This entry will show off ads for movies, toys, cartoons, breakfast cereals, and so much more. This will probably be divided into two segments, one from 1980-1995 and the second from 1996-2005. Readers looking for a nostalgia kick should tune in for the end!

A final note: I did my best to capture these ads in the best quality I could. However, some comics were in poor condition, resulting in some images that are fuzzy, smudged, or torn. Also, in some images, parts of a reverse page may be visible, but this won’t hinder readability. Finally, there are some double-page spreads, but I wasn’t able to capture the entire image, as I have a small scanner. So, double page spreads will be broken up into two images. Apologies in advance.

So, without further ado, let’s get this series started! When presenting these ads, I am only going to offer small bits of commentary, as I think these ads speak for themselves and there isn’t much that I can add to them. For optimal viewing, I recommend using the gallery function, something I haven’t properly utilized until now.

The first installment of this series focuses on systems and games from an early time in home gaming, when video games really started hitting the mainstream in pop culture, but were still viewed as toys. What I thought was most interesting about these ads was how little gameplay was shown in most; it is hard to show dots on a screen as a grand, epic adventure or a mission to save the Earth. Many of these ads feature bold artwork that tried to capture the experience of playing a game above the gameplay itself. There are bright, colorful images reminiscent of cartoons and bold, garish artwork appropriate for Sci-Fi and Fantasy artwork at the time. Accompanying the artwork are catchy slogans and short paragraphs summarizing the adventures awaiting the player, describing the crude graphics as something far greater. 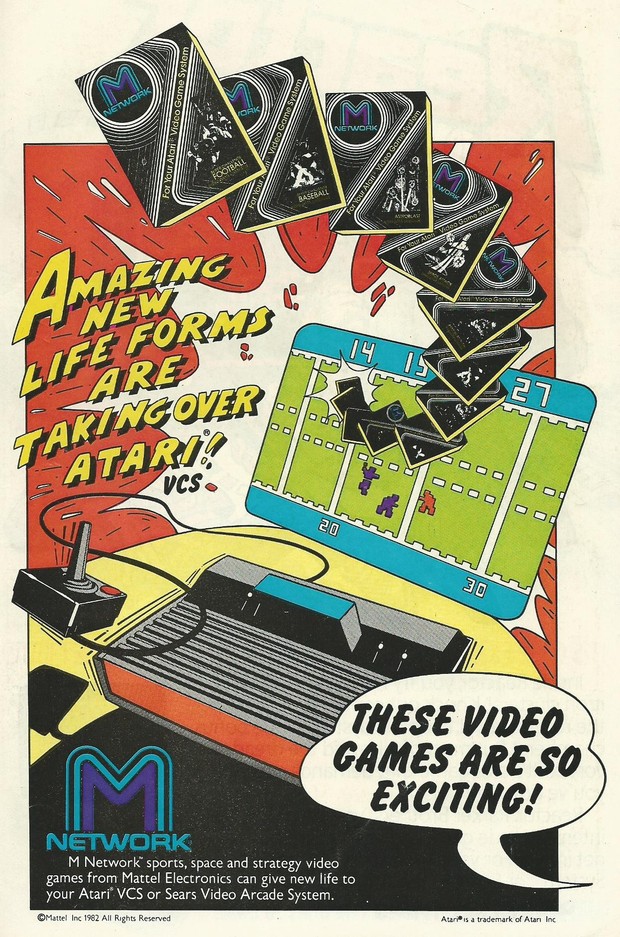 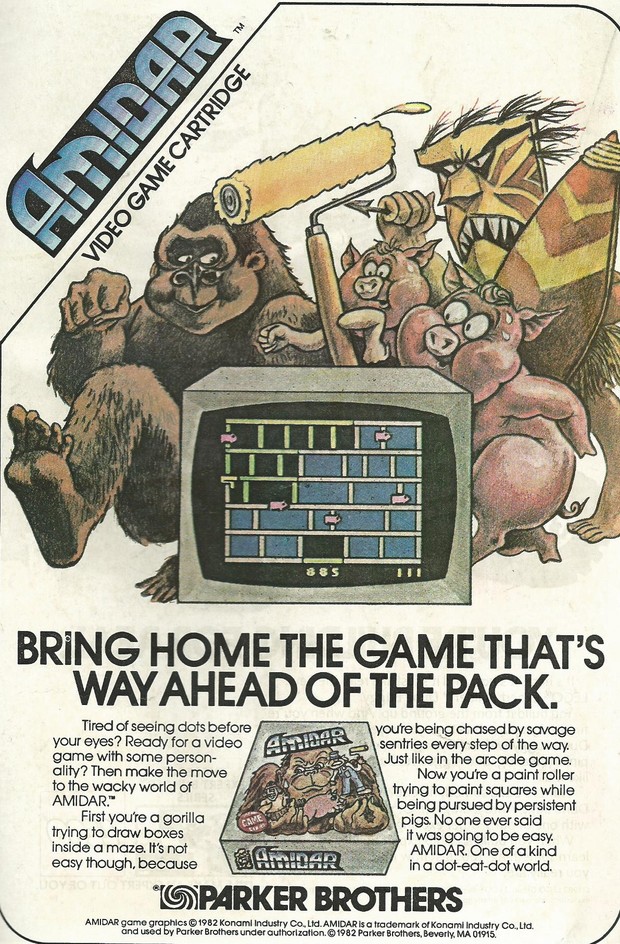 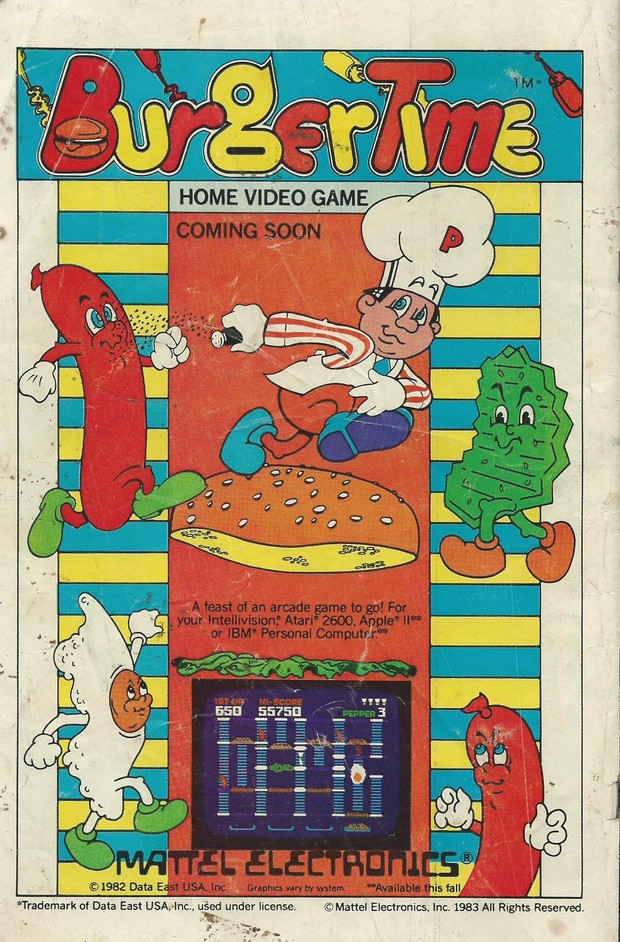 One of my favorite arcade games. Some very addicting gameplay. 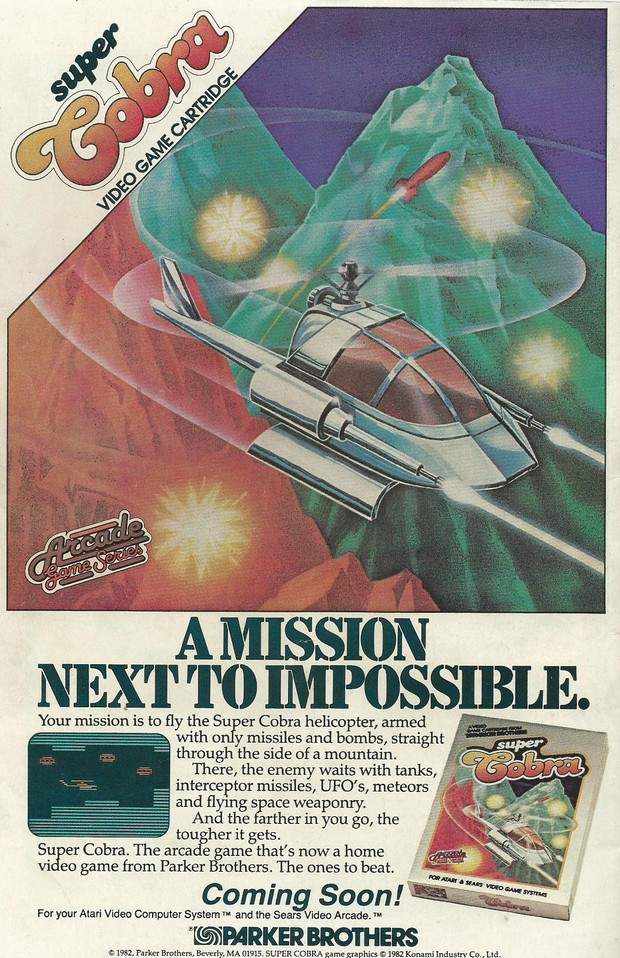 So, it isn't quite a Mission: Impossible? 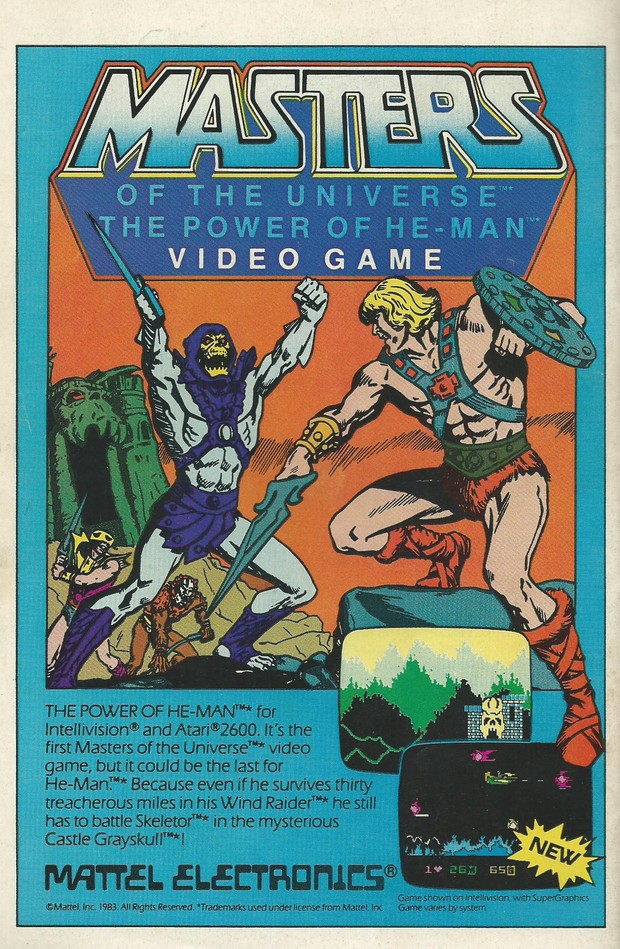 Now you have the power! 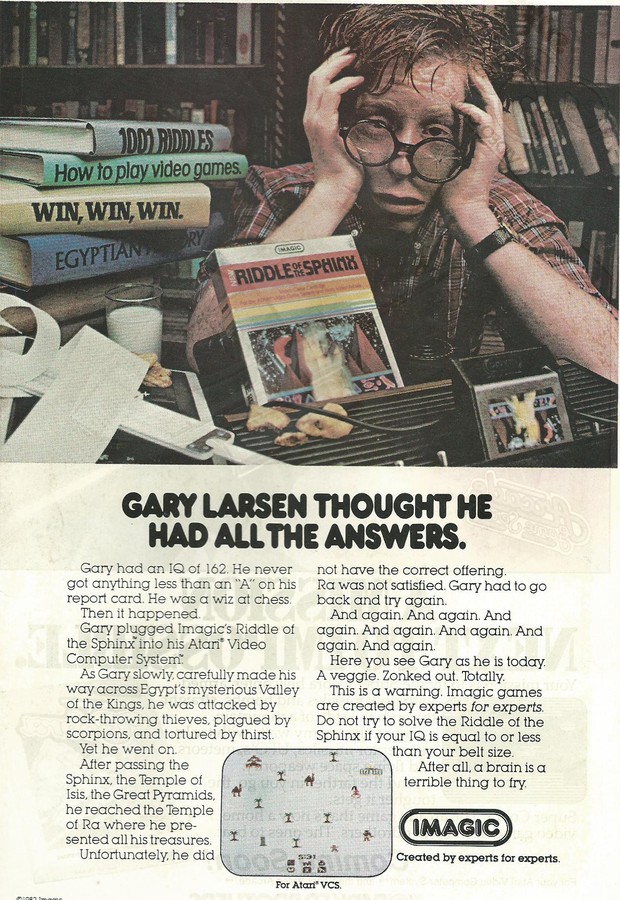 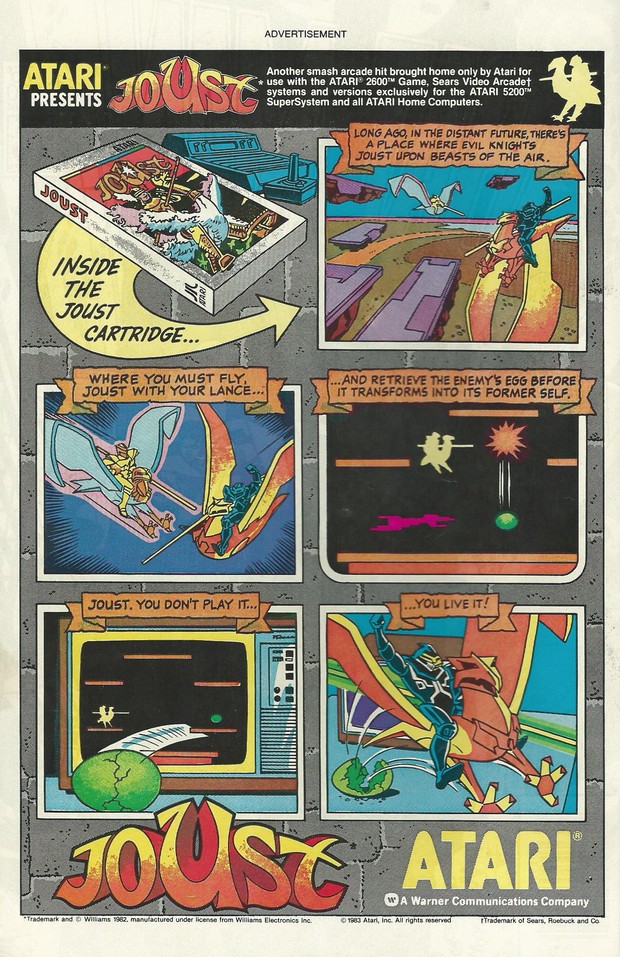 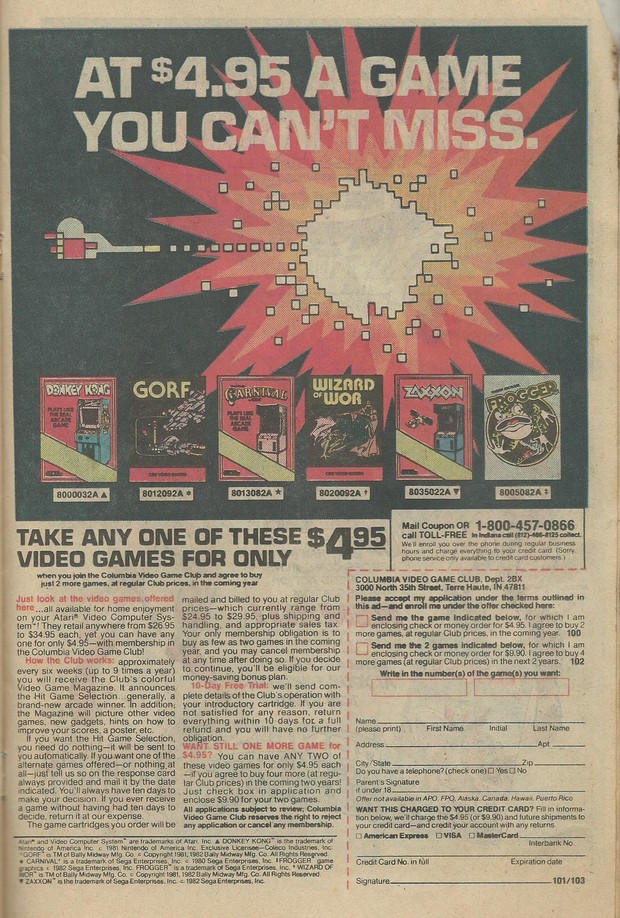 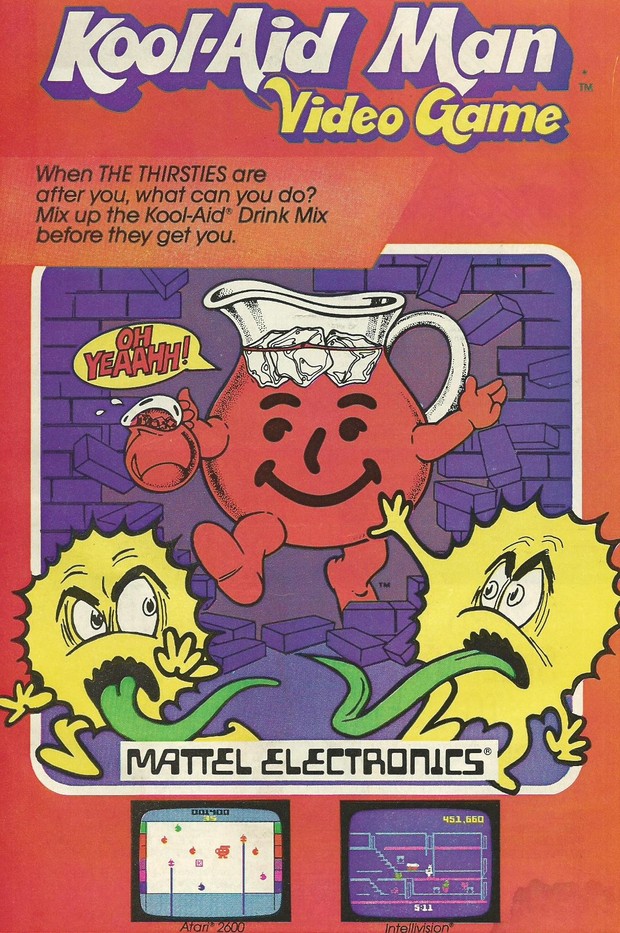 This is real. There actually was a Kool-Aid video game. Back then, everybody and their grandma could and did make video games. 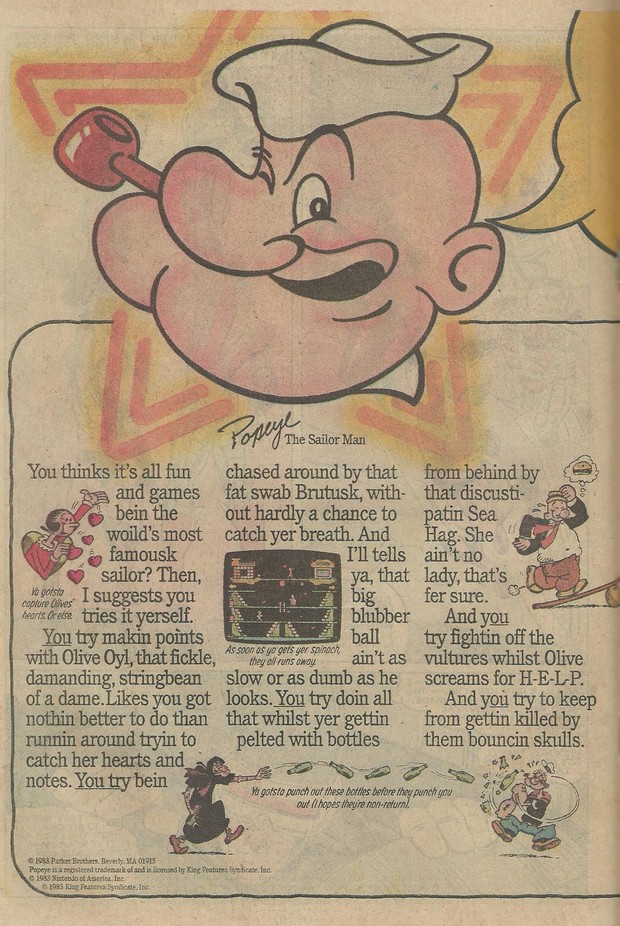 Part 1 of 2. Fun fact: this was one of the first games Shigeru Miyamoto designed. 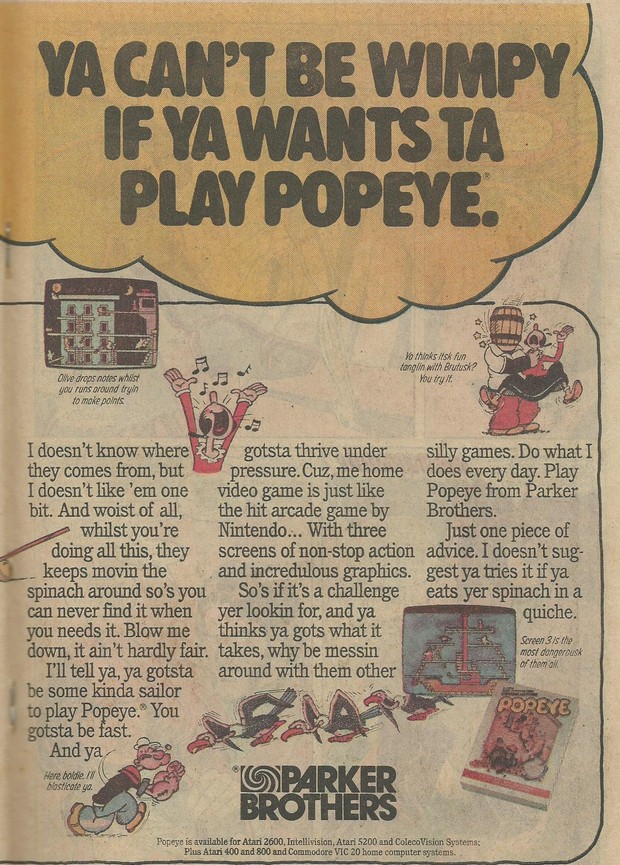 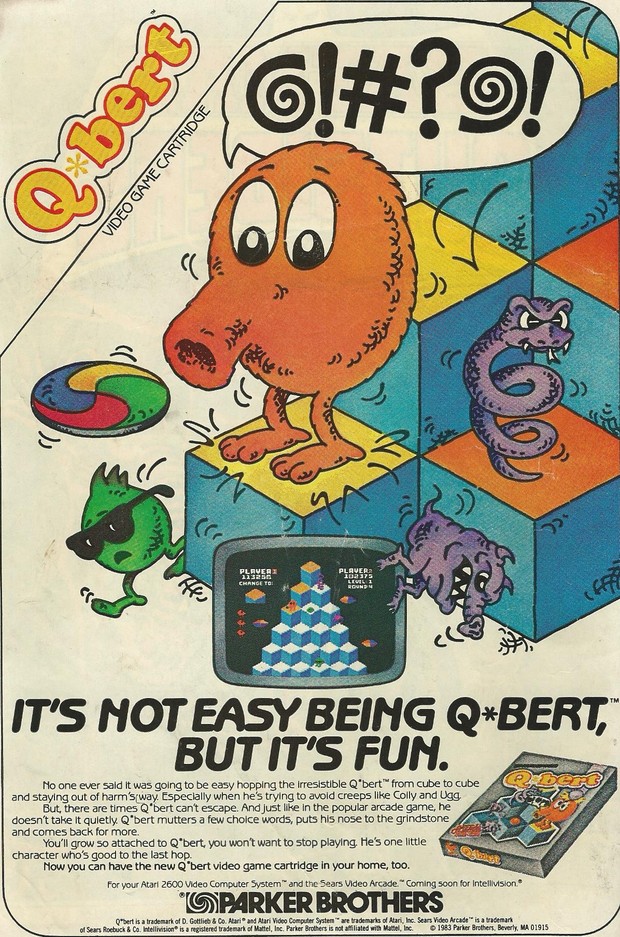 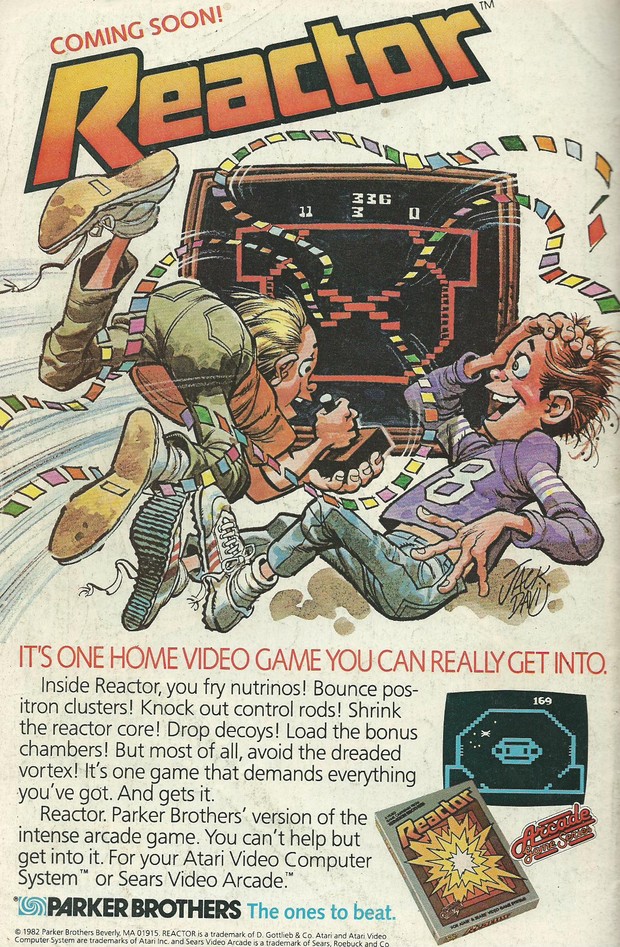 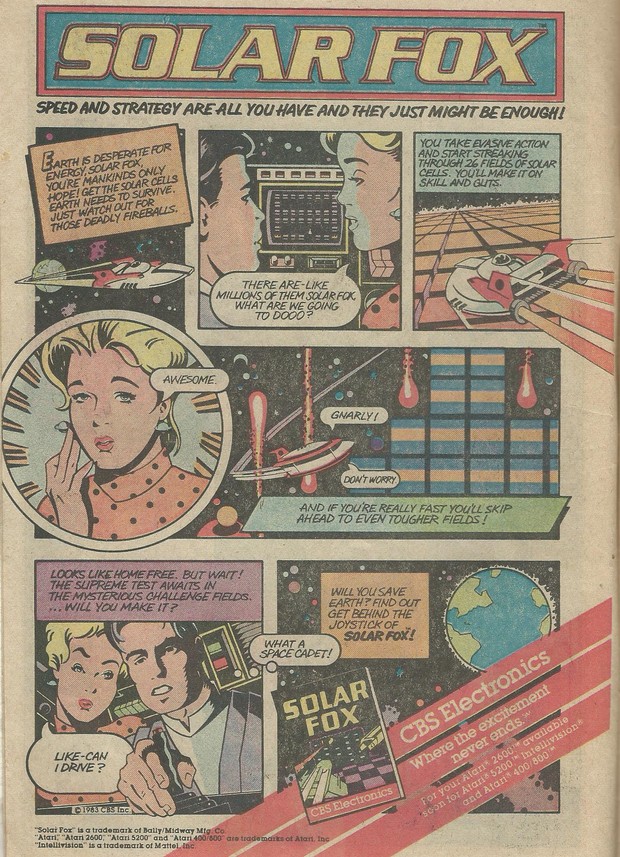 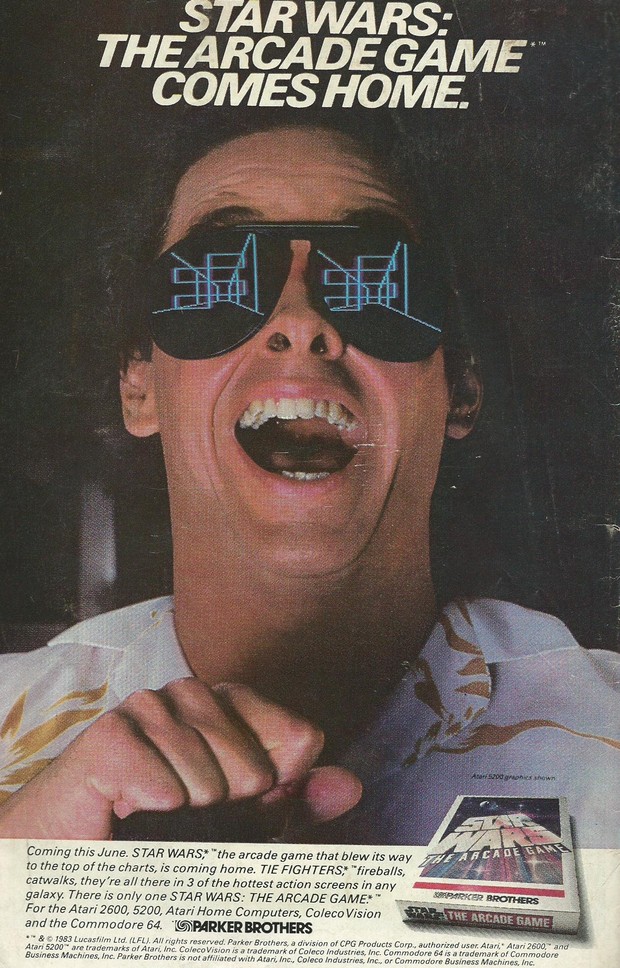 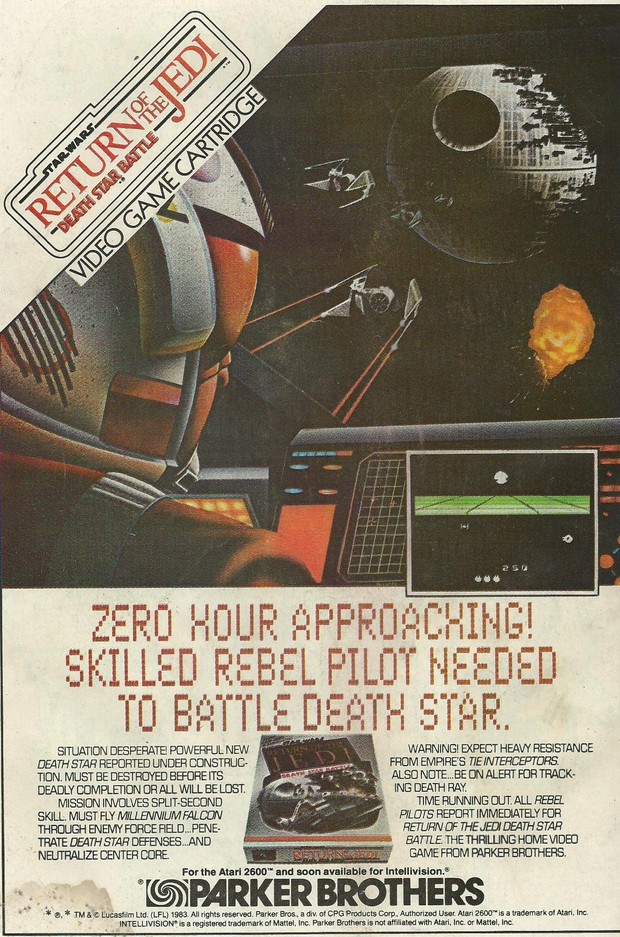 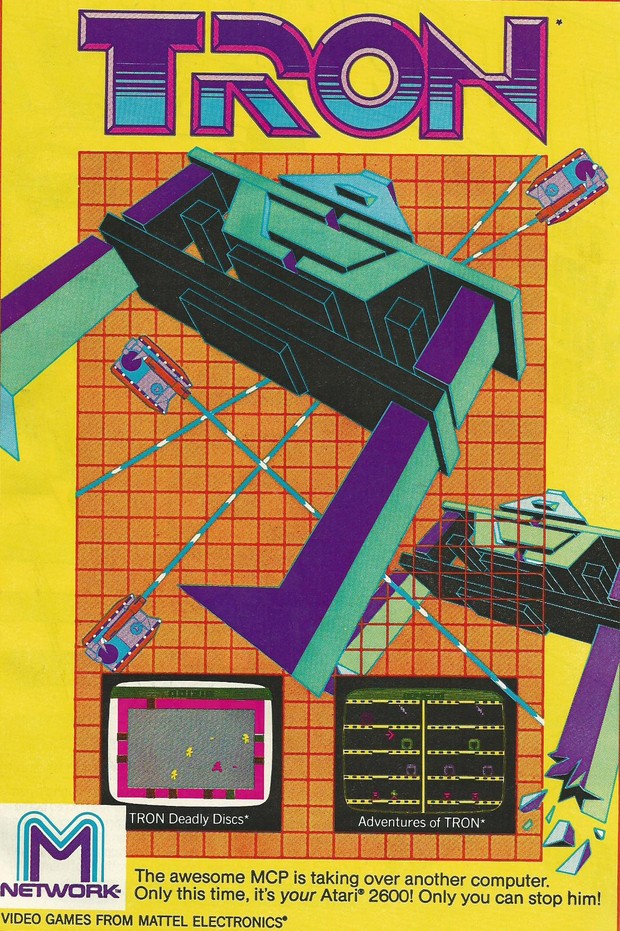 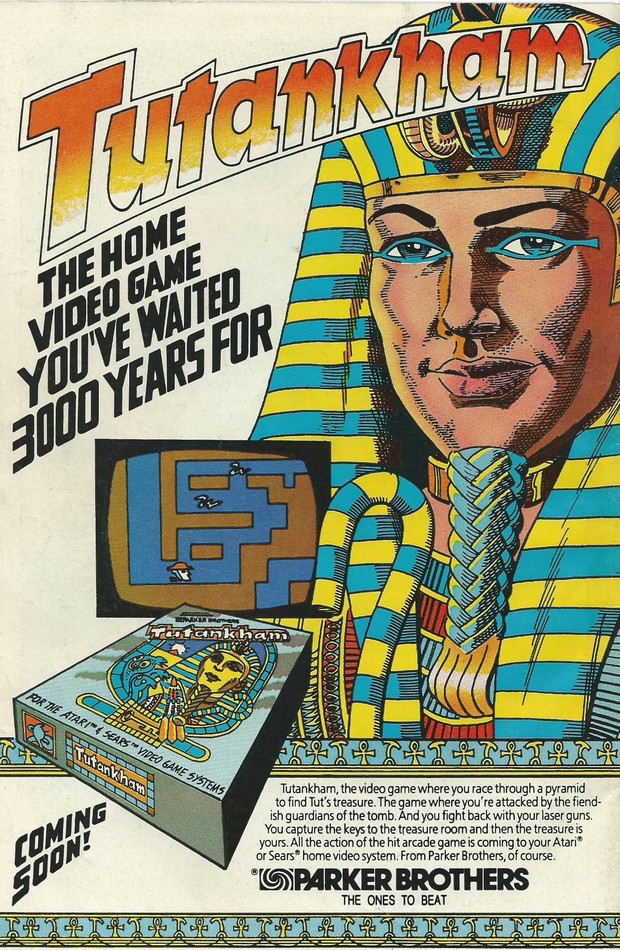 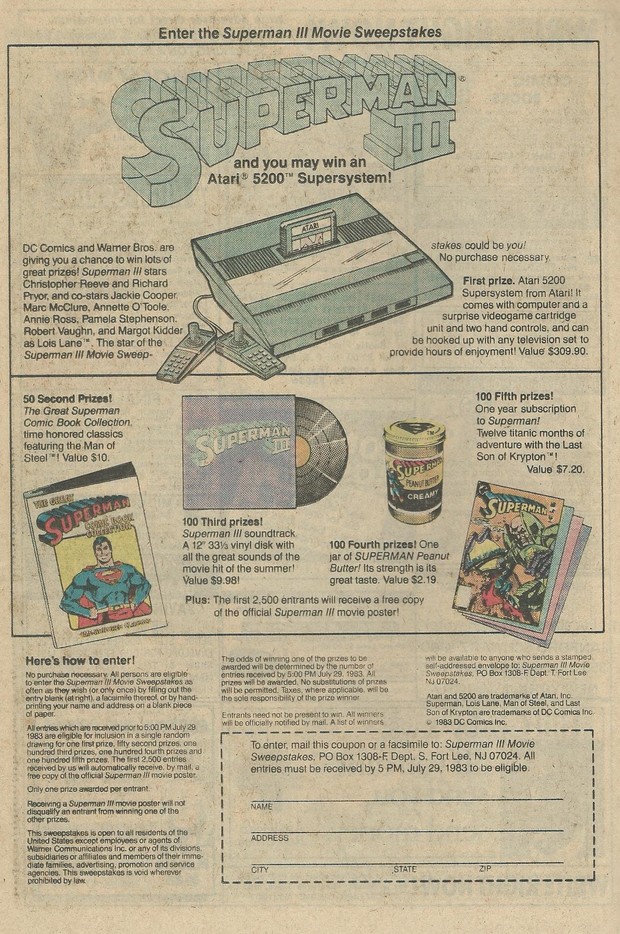 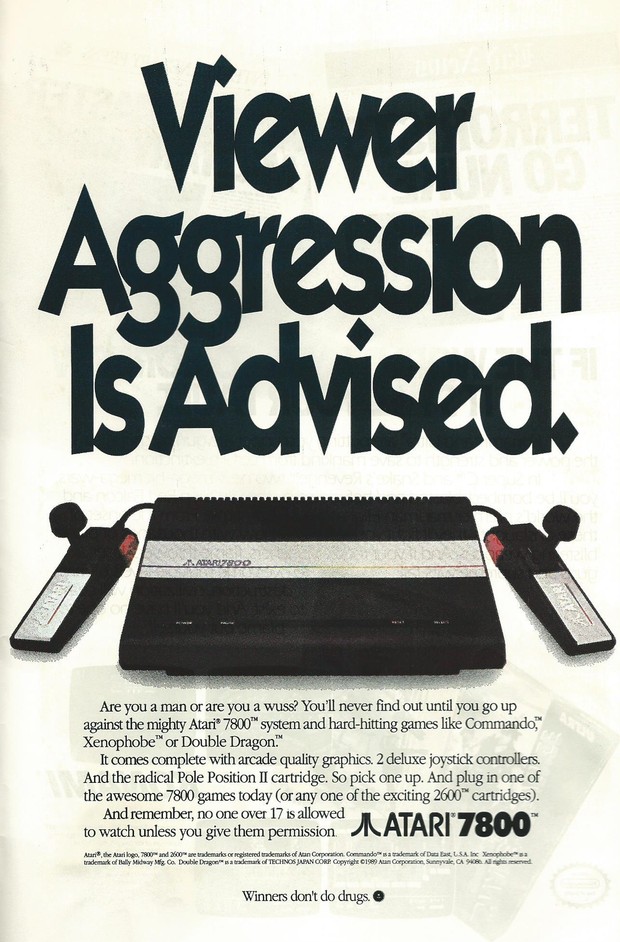 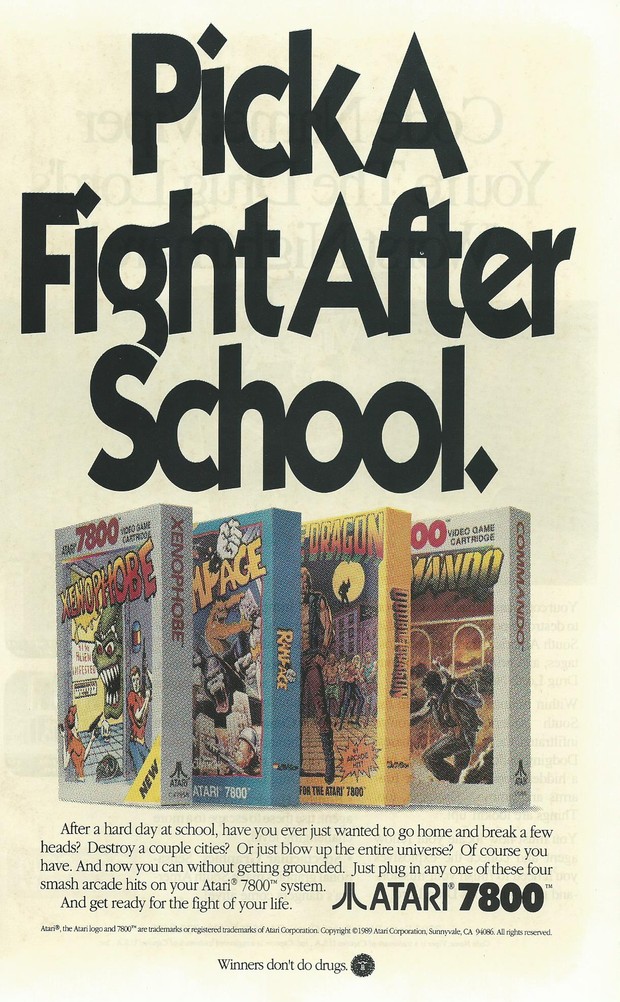 Remember, kids: violence is the answer. 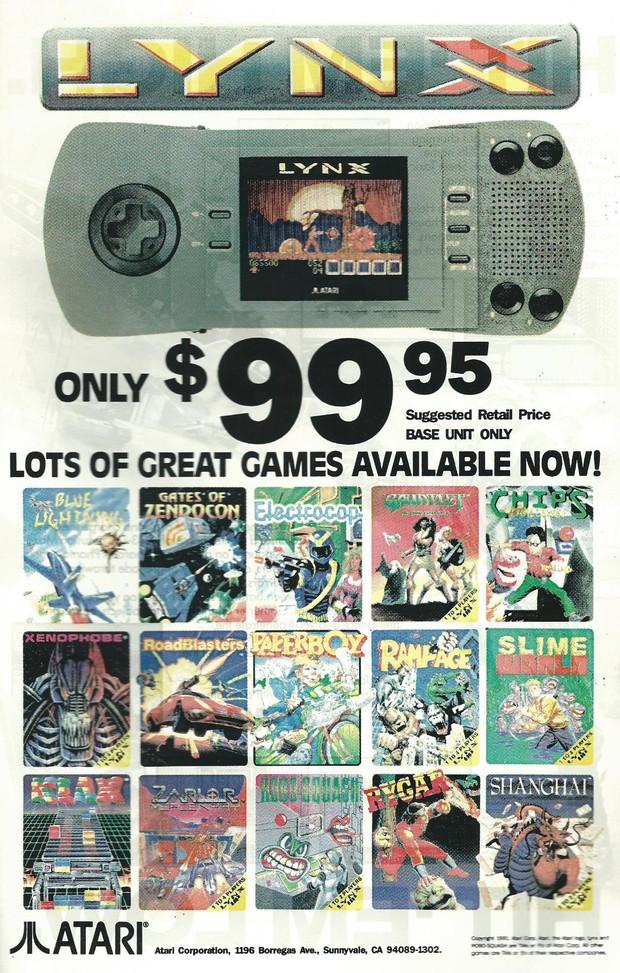 My money's on Electrocop. 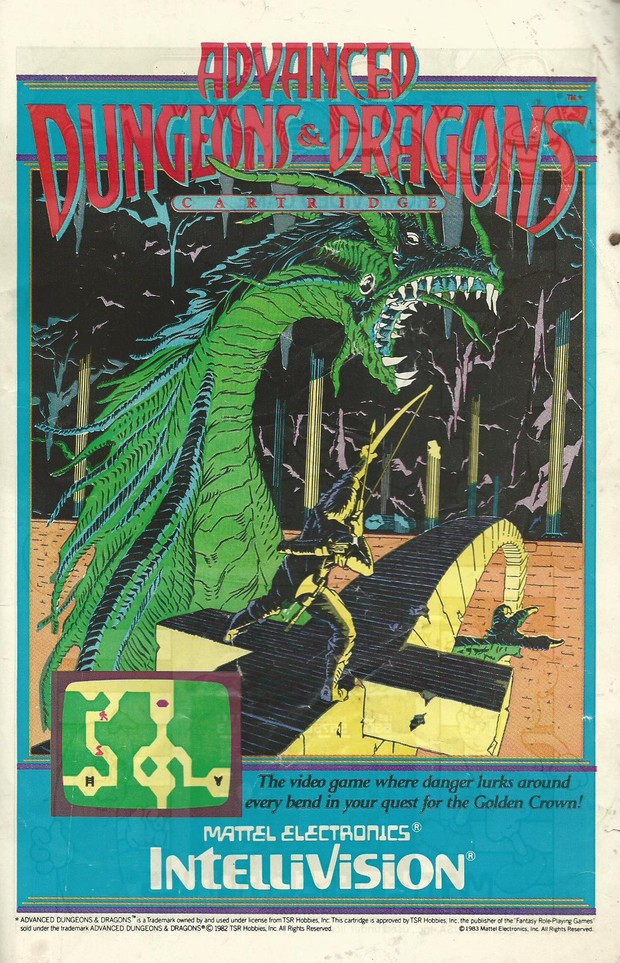 Some great artwork. I like the use of color. 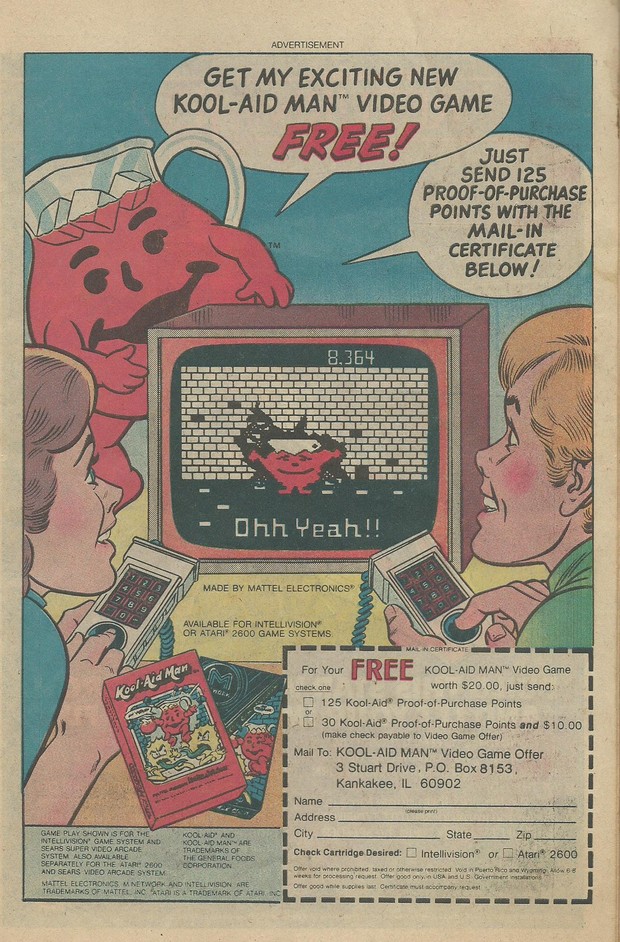 This was a real game. 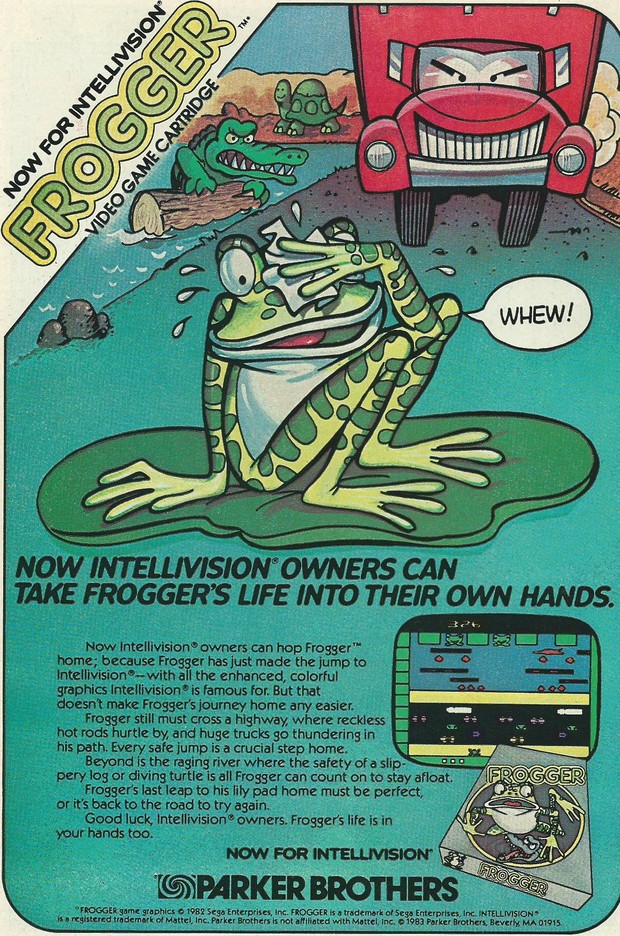 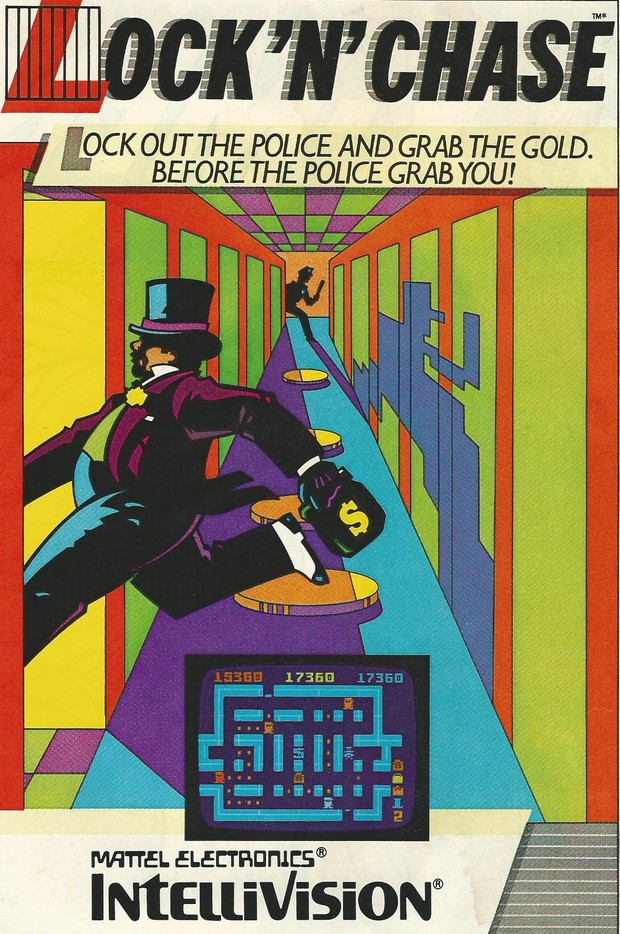 This is one of my favorite ads so far. I really like the use of colors and the perspective of the image. The transition from the policeman's realistic outline to a pixelated shadow is cool. Plus, that dude has a snazzy outfit. 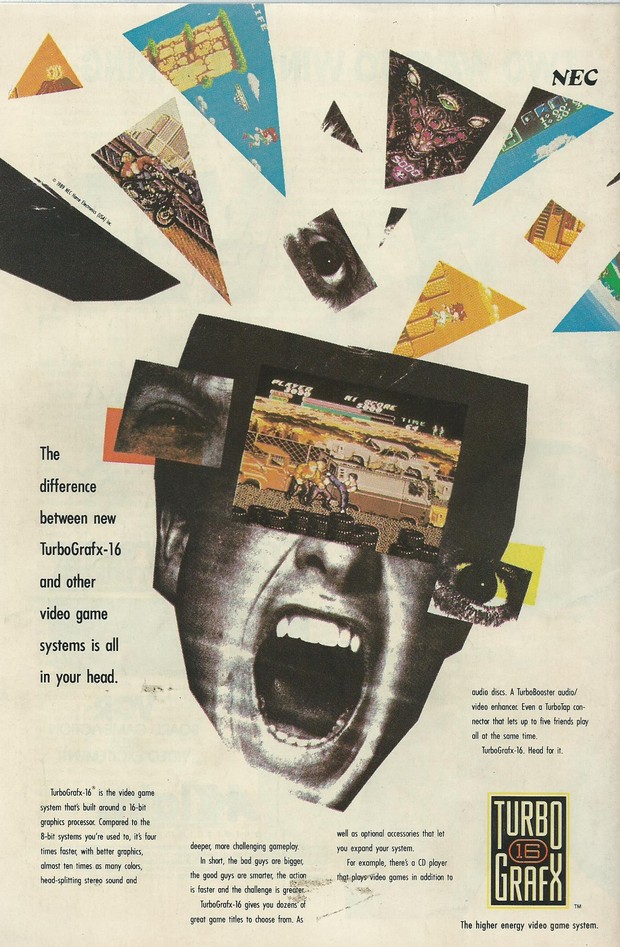