Griftlands Review: A Deckbuilder With a Story To Tell 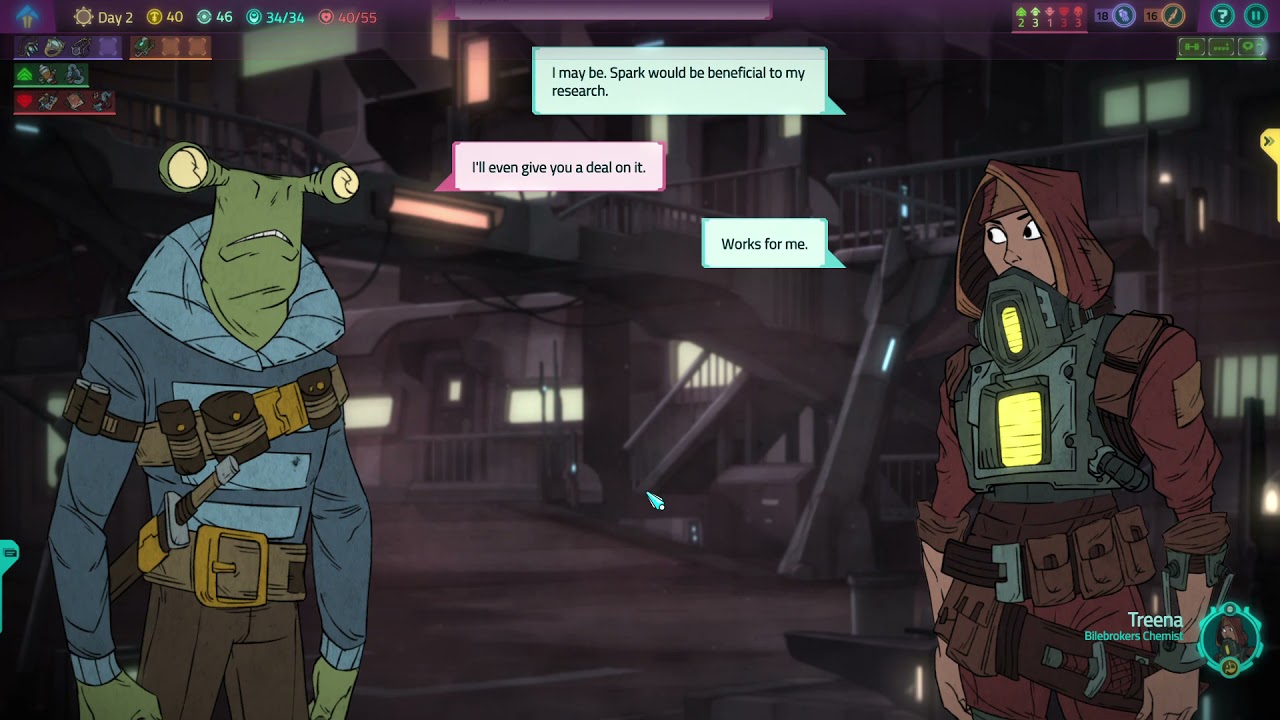 Griftlands is a roguelike deckbuilder game.  At this point, we’ve seen enough games of this variety to get the point.  However, Griftlands has a unique hook.  It has a story to tell, and the card battles are a vessel for almost any interaction you have in the game.  This divides into two types of conflict, Combat, where cards represent different attacks, and Negotiation, where cards represent the various arguments used.  Win an argument, and you may convince a local bodyguard to look the other way during a brawl.  Lose, and there could be diplomatic consequences that affect you for the rest of your run.  These innovations separate Griftlands from contemporaries of the genre and make it worth playing.

Set in a rugged sci-fi universe, this game features three characters looking to make their way in the unforgiving Griftlands.  Players can choose between Sal, a bounty hunter seeking revenge on an old rival, Rook, an old veteran caught in between feuding factions, and Smith, a trust fund-lowlife set on winning back his lost inheritance.  These stories are interesting enough on their own, and the ability to choose how I engage in conflict gives players a unique sense of agency seldom present in deck builders.  Each character is mechanically different as well.  Sal is a beginner’s character with a standard moveset, while Rook and Smith have more interesting possibilities in both battle and negotiation.  Rook relies on charging up his pistols in battle to do more damage, and his lucky coin in negotiation, in which cards will play differently depending on what side is facing up.  Smith has a unique health regeneration ability whenever he damages himself, and can drink during combat, using the empty bottles as weapons.

There are two ways to engage in Griftlands, Combat and Negotiation, with two separate decks you must manage.  Negotiation is unique in the sense that while there are standard damage and defense cards, you can also summon “arguments” which are separate from your core health pool, but can buff or debuff your character, or even attack your opponent's core argument. Arguements orbit your character during negotitation and can provide unique benefits

Combat features your more traditional deckbuilder fare, where cards represent different attacks, and you eliminate your enemy by whittling their health pool down to zero.  What Griftlands does to change this formula is once enemies lose enough health, they will “panic”, giving one the option to either spare or execute them.  Killing enemies grants you rewards in the form of new cards, but also holds consequences - commit too much murder and you will develop a reputation, and other characters will begin to hate you - hampering you with debuffs and making negotiation with them more difficult. 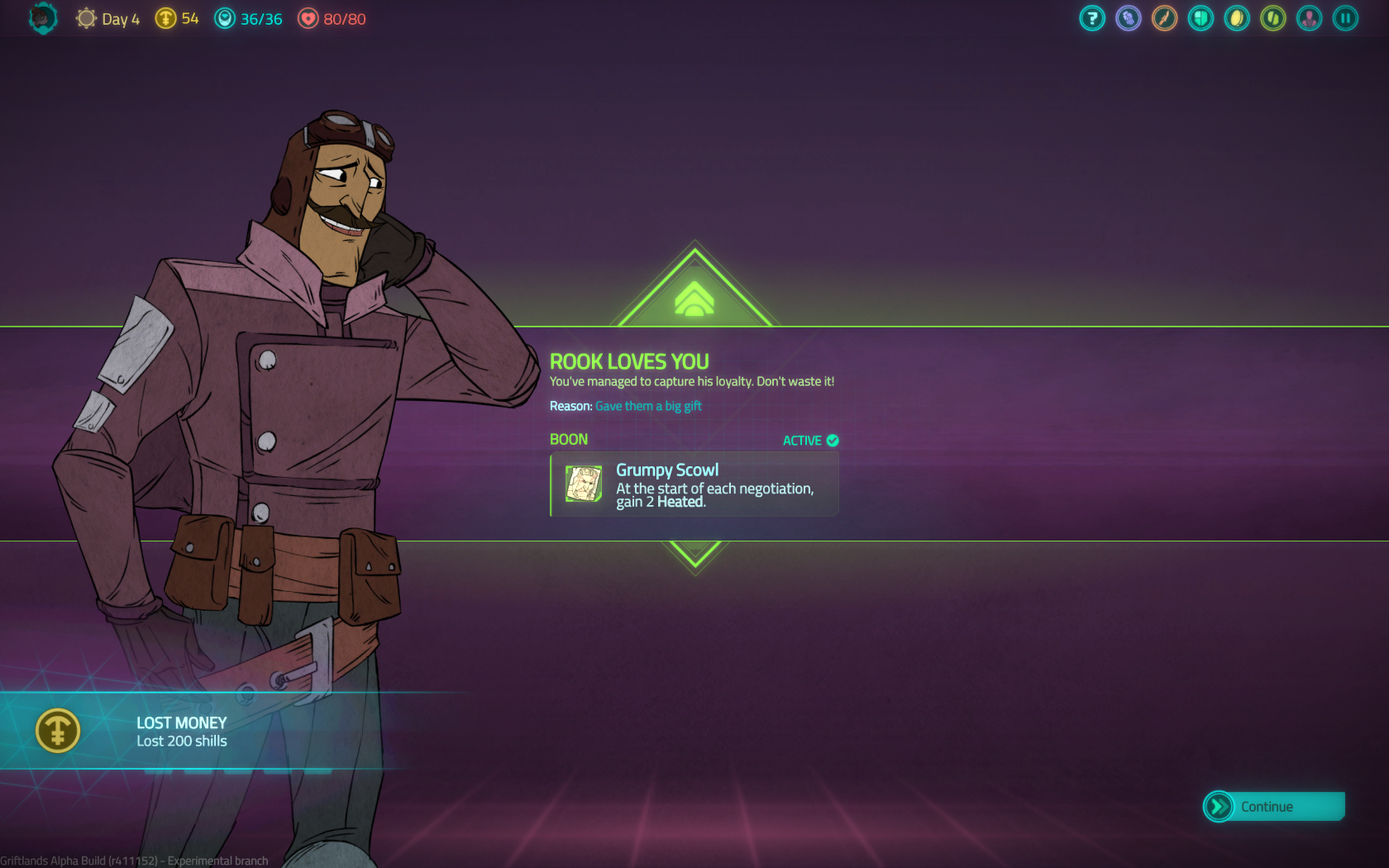 Each run is pretty lengthy - each topping out within two hours.  The story in each is interesting, and considering what you find in other roguelike deck builders, is far better than its contemporaries.  Uniquely, each character one interacts with has an opinion modifier that will grant you rewards and support when they like you.  A character who you have done favors for or bailed out of a tough situation may come to your aid in combat or back you up during a negotiation.  Give a character a reason to dislike or even hate you, and you might find yourself being hunted down by your newly formed rival.  Managing relationships is key to success in Griftlands, and it adds a fresh twist to the genre, giving players even more to strategize beyond what cards they wish to add in their deck. You can hire allies to aid you in battle, or convince them through negotiation

However, most card-based roguelikes have little narrative for a reason, and clicking through pages of dialogue gets a bit old in repeated attempts.  For the most part, each run has two main decision paths players can choose from, and once they have seen both, these dialogue sequences are mere time wasters that you are better off skipping.  Griftlands does offer a “Brawl” mode, which are abbreviated experiences cutting out most of the conversation, but doing this removes the relationship metagame that makes Griftlands unique.  Overall, each attempt simply took too long to make this as replayable as similar games in the genre.  I still enjoyed it, but there are downsides to the emphasis on story upon repeated attempts.

Griftlands has an interesting art style, with a gritty beauty that matches the rugged sci-fi world.  The detail in each of the character animations impressed me during each of the combat sequences, with Smith taking a large swig of his hooch whenever a drink card was played or Rook reloading his pistols whenever a card involving charge was used.  They aren’t revolutionary, but for most card games you really aren’t getting the same level of presentation that you have here.  There are flaws with the UI however, as certain information is sometimes unavailable to the player, like when your cards conceal an enemy’s health bar.  This is mainly a problem on the Switch, but still unacceptable when that information can be the difference between victory and restarting a run.

While Griftlands is not as replayable as most deckbuilders, it is worth experiencing if you have any interest in card-based roguelikes overall.  It may not keep you coming back after you’ve finished the three plotlines, but they are fleshed out enough that even a few runs of each will leave you feeling that your time spent was worthwhile.  In a genre flooded with copycats, Griftlands rises above with unique additions like relationship management and negotiations that keep the gameplay loop fresh.