The Story of "Walking in Circles" 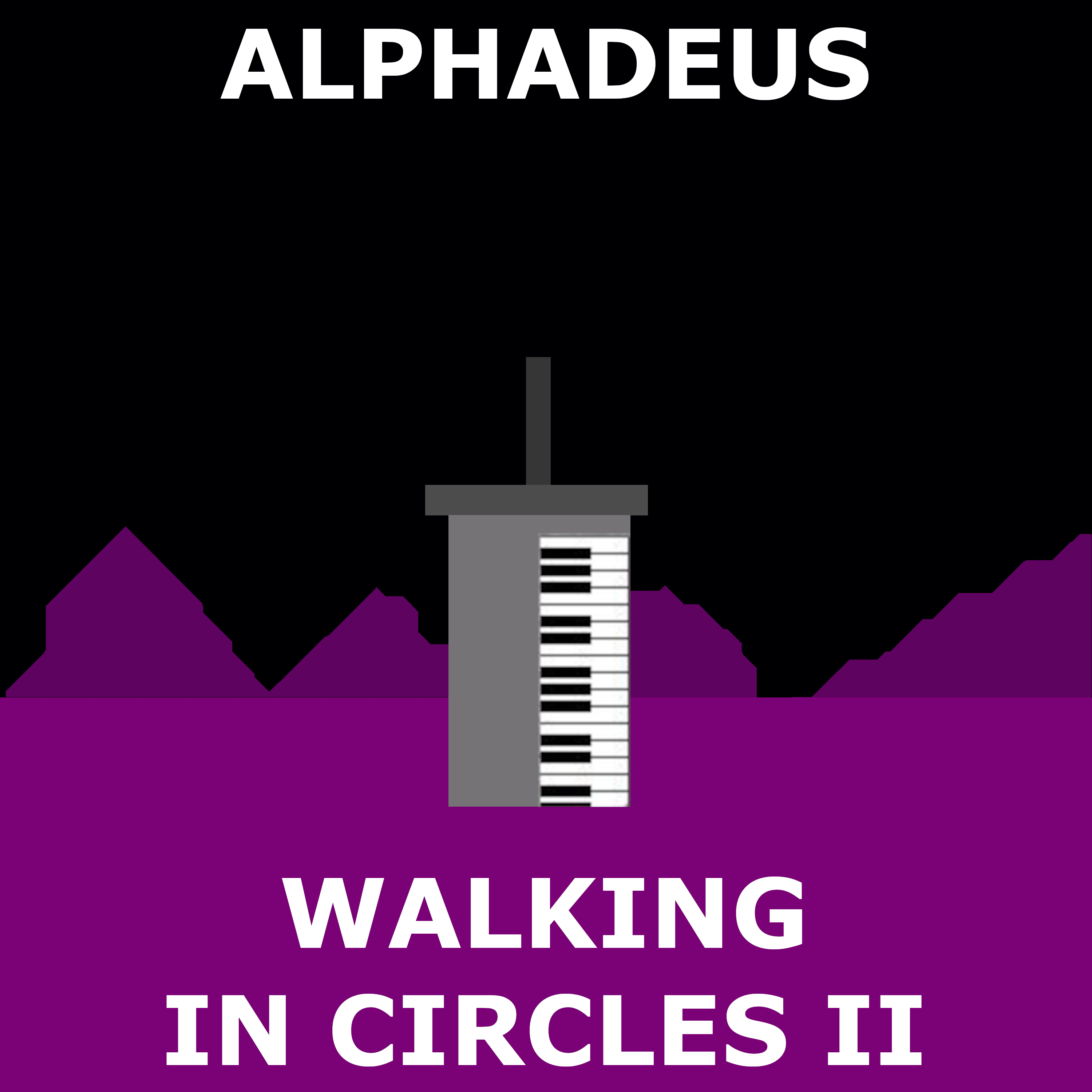 Hello. I'd like to share some details on the story of Walking in Circles, since I released a new album called "Walking in Circles II". Walking in Circles is a story idea I came up with back in around 2009 or 2010. It's about a man trying to find a purpose in his life. I am bad at telling stories, so I hope it's somewhat understandable. It was a very personal story for me, and was meant to be my first and last album at the time.

Alphadeus is trying to find his purpose in life. While he has a wonderful partner named Jonquil, he feels that he was meant to do something important. He builds a spaceship that operates on emotions. His plan is to search the universe for his purpose, relying on his emotions as his guide. He also wields a long "Synth Blade", a sword with piano keys along one edge, that could be played to enhance the weapon in battle.

This song represents the moments before entering the ship. He says goodbye to Jonquil, promising her that he would return a complete person, having fulfilled his purpose. It also represents the time of meditation and preparation that needs to be made for the journey.

Alphadeus begins his journey, taking off to the unknown universe. This song represents the anticipation of the adventures that await.

Alphadeus reaches outer space, and begins his journey. Along the way, he receives distress signals from nearby planets. He investigates and handles every hostile enemy threatening the different planets. He becomes known as a hero to the solar system.

While he did save many planets from disaster, he still feels that he hasn't found his true purpose. He believes he was meant for something greater. Thinking about his life so far, he feels a powerful emotion that sends the ship speeding through the universe. He wonders if his ship will guide him to his true purpose. The ship leaves his solar system and seemingly heads in a random direction. Eventually, the ship stops in the middle of nowhere.

Not paying attention to where his spaceship took him, Alphadeus is lost. This song represents the frustration and fear of being lost in an unknown area. He is unable to find his way back home. Upset, he slams his hands down, and the ship stops moving. He cannot control it in his current state of mind.

Alphadeus has an emotional breakdown. Worried that he will never make it home, and see his beloved Jonquil again. He feels sadness, then anger at his situation. A warning comes from the ship. Something is approaching.

Alphadeus' emotional outburst attracts a creature known as the Abstraction, Xuan. Xuan's body is like a liquid shadow that seems to be able to stretch as large as a planet. The fear Alphadeus feels allows him to regain control of the ship. He manages to escape the grasp of Xuan briefly, but loses control of the ship again, which allows Xuan to catch up and consume Alphadeus and his ship in shadow.

Alphadeus wakes up back on his home planet. Something seems different. Everyone is treating him like a god, worshipping him. He searches for Jonquil, but is unable to find her. He returns to his home, which has been replaced by a throne. The nearby people ask Alphadeus to sit in the throne to become the ruler of the planet. Alphadeus refuses, his purpose is not to rule others. Everything fades to black again.

When his vision returns, Alphadeus is chained to a post, unable to move. His sword is on the ground nearby, and in front of him is Xuan, the floating shadow being. Xuan tells Alphadeus that his strong emotions attracted him to his location in space. That they are now on his home planet, and Xuan was going to destroy it while Alphadeus could only watch.

2:41 of the song, Alphadeus summons the strength to destroy the chains, grab his sword, and battle Xuan. None of his attacks seem effective, as they only ever hit the shadow part of Xuan's body, and not his armored head. Not giving up, Alphadeus gets closer to striking the creature where he believes his weak point is. Eventually, Alphadeus slices through Xuan's head.

4:54 of the song, Xuan's body fades away slowly, revealing that Alphadeus had killed Jonquil. The shock of this event causes Alphadeus to lose consciousness, as he slowly hits the floor, the scenery fades away and reveals that Alphadeus is still on his ship. The whole thing was a nightmare created by Xuan to weaken and kill Alphadeus.

Alphadeus wakes up, but is dying. He uses the ship's communicator to send out a message in all directions, hoping to reach Jonquil. He also sends a message meant for anyone else that hears it. He realizes his purpose was to simply exist and do good things. After sending the messages, Alphadeus closes his eyes.

[Drifting Through My Imagination]

Alphadeus is on a raft in dark water. Eventually the raft reaches land, which consists of purple sand and mountains. Using his blade to prop himself up, he is able to stand, and walks towards a tower in the distance, leaving his sword behind. He does not have the energy to carry it, and eventually collapses before he could reach the tower. This is all his last dream, and he dies alone out in space.

This song represents the end of the story. Alphadeus is dead, Xuan goes on to find other living beings. Jonquil receives the message. It tells her about what happened, and he says goodbye.

This was the original Walking in Circles story. It was supposed to be my first and last album, but I kept going. I eventually repurposed the story to continue, that instead of dying, Alphadeus was saved by another being of pure light, that brought him to Asphodel Meadows, where the story would continue for another 3 albums. That story will most likely never get told.

But ultimately Alphadeus goes on to become complete in the other reality.

I apologize if it's depressing. I was in a very dark mindset at the time. I hope you at least enjoy the music :) Thank you for reading.