So the Holiday season has come and gone and with it a very successful Secret Santa. This was the 3rd annual Secret Santa that took place on this site and all 3 were put forth and effectively hosted by community members with me being the 3rd.

Firstly before we go on I would like to say thank you so much for participating this year. If I were being honest I was sort of worried that nobody would consider it. I don’t consider myself to be all that important, popular, or even noticeable. This is mostly because I find myself in the middle when it comes to a great deal of things a quintessential jack of all trades master of none. To see the response it garnered and the numbers we pulled was both a surprise and a blessing. What I thought would originally be maybe 5 people turned out to be 20.

20 people who more than likely only know each other because they frequent Destructoid decided to share some holiday cheer and trade gifts. I can say with absolute certainty, of all the places I’ve been to online I have never seen anything like this.

So Once again thank you all greatly for your participation and should we still be here come this December I would gladly host it again. I wish you all the best and now without further due a few words from some of our Santas.

I'll start with myself: My Gift came from WesLikesTacos which was both salt and sanctuary and an amazing godzilla print which I will frame and hang once I get back home and hang it on my wall, right next to my Keyblades. If you didn't know I love Godzilla and collect related merch such as figures, VHS tapes, DVD's, etc. So when I got the print I was incredibly pleased to ad this to my collection. My recipiant was Nanashi who I gifted a copy of DoA (PS4). I decided on DoA because I felt it had the highest potential value as a gift.

Next up is AdmiralAckbong who gifted some lego dimensions box sets, and by the looks of it this helped Gmana greatly (I feel you man). 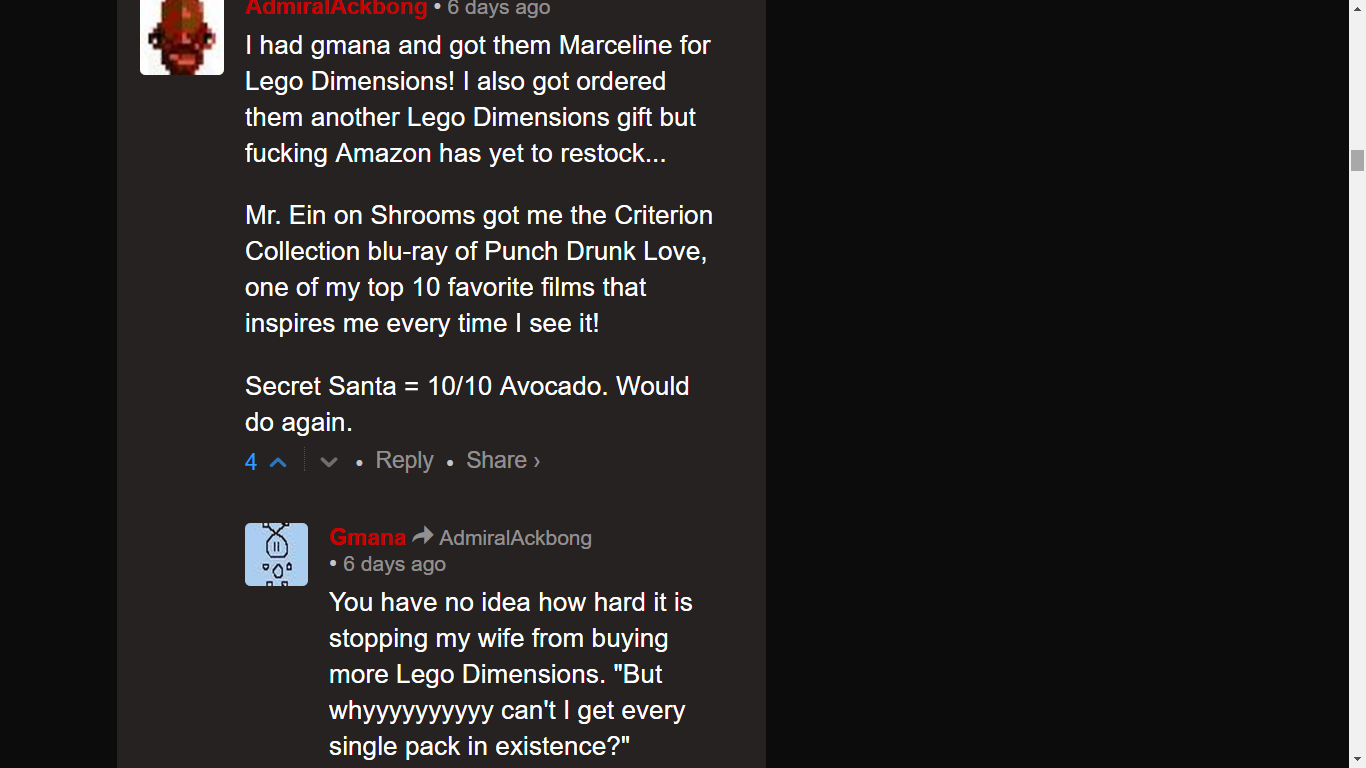 Next in we have Inquisitive Ravenclaw who had TheBlondeBass 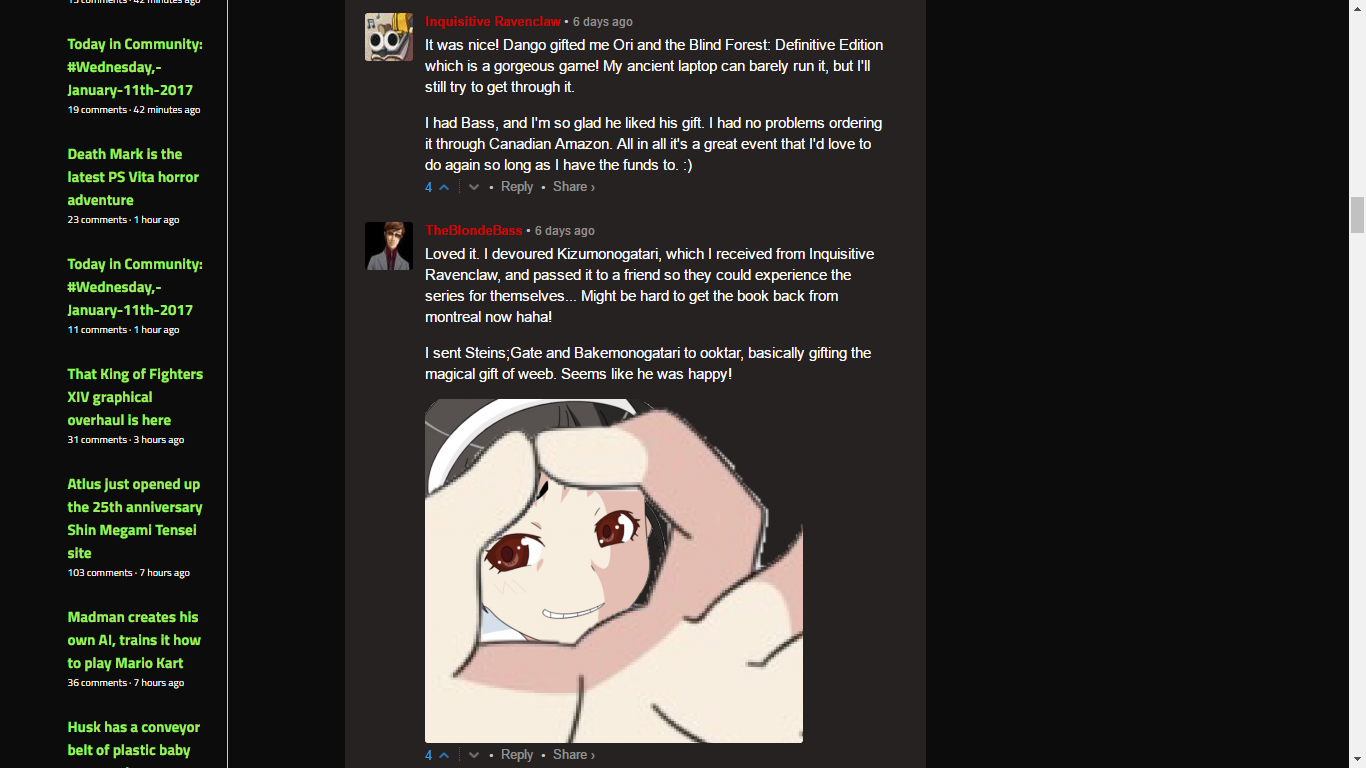 As I mentioned before wes was my Secret Santa and I can't thank him enough for the gifts. His Secret Santa was Deadmoon who sent a rather Sexy Sweater. I have a similar story for another gift exchange I participated in, but that story is for another time. 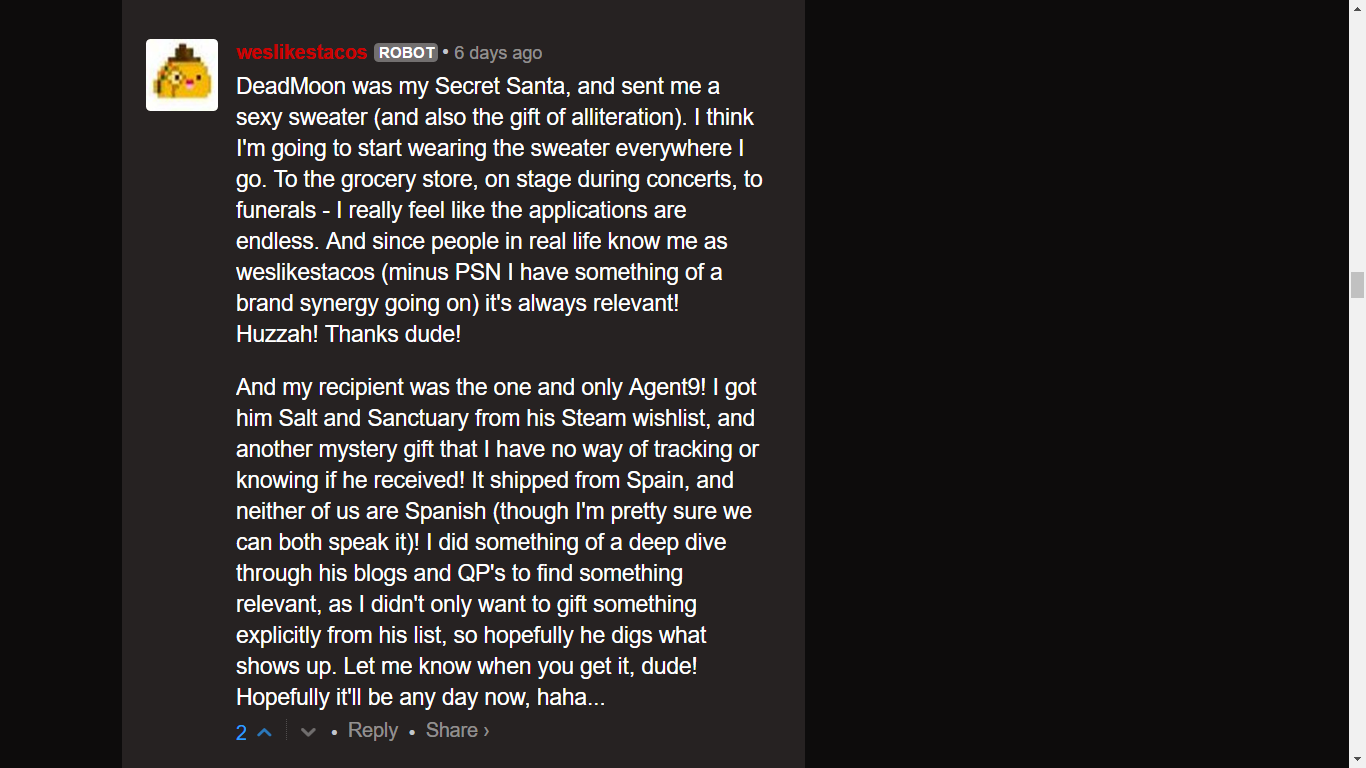 Here we have Robosquid who is stocked up on dice and conveniantly has a place to store them. 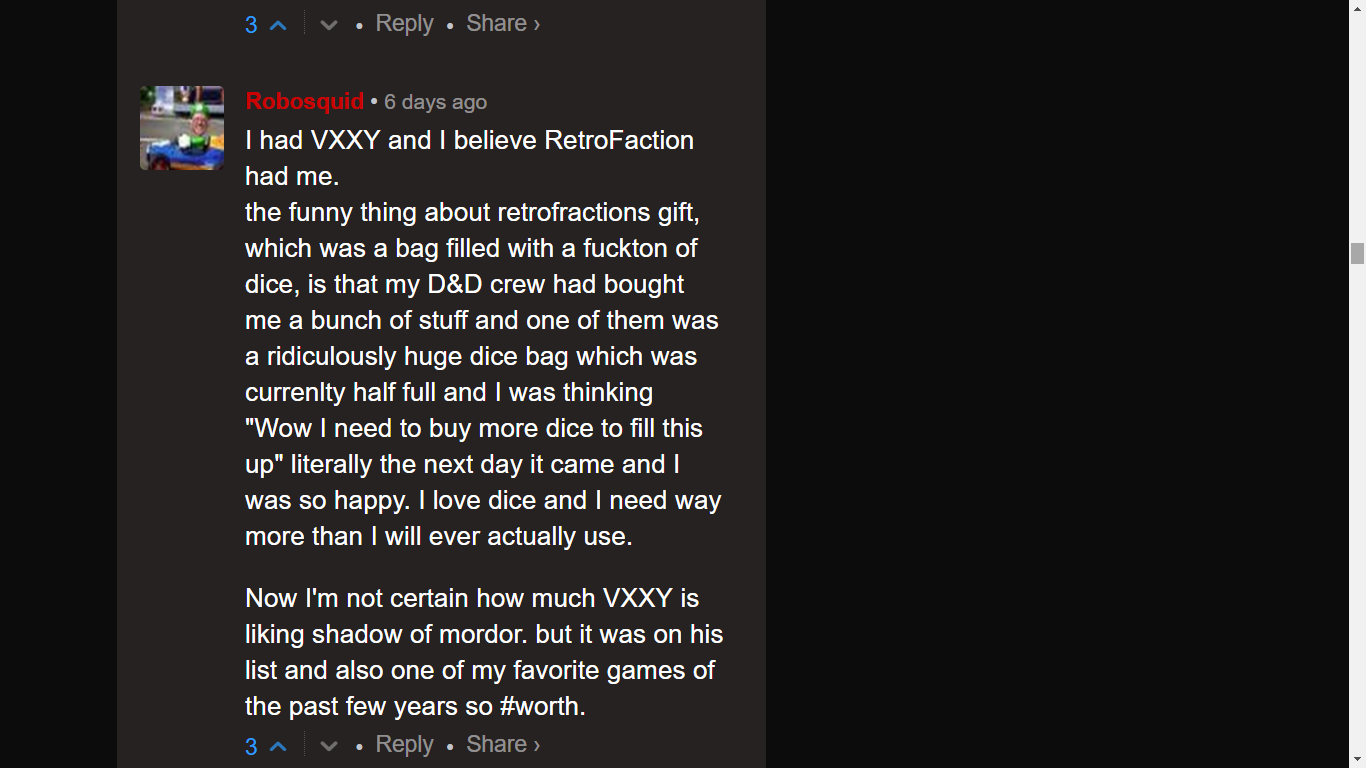 Indie Games and music, a perfect paring indeed. Something to note though, I was not aware that there was an album called Snarky Puppy: Ground Up. It sounds like an Occams band. I may have to check some of these out myself. 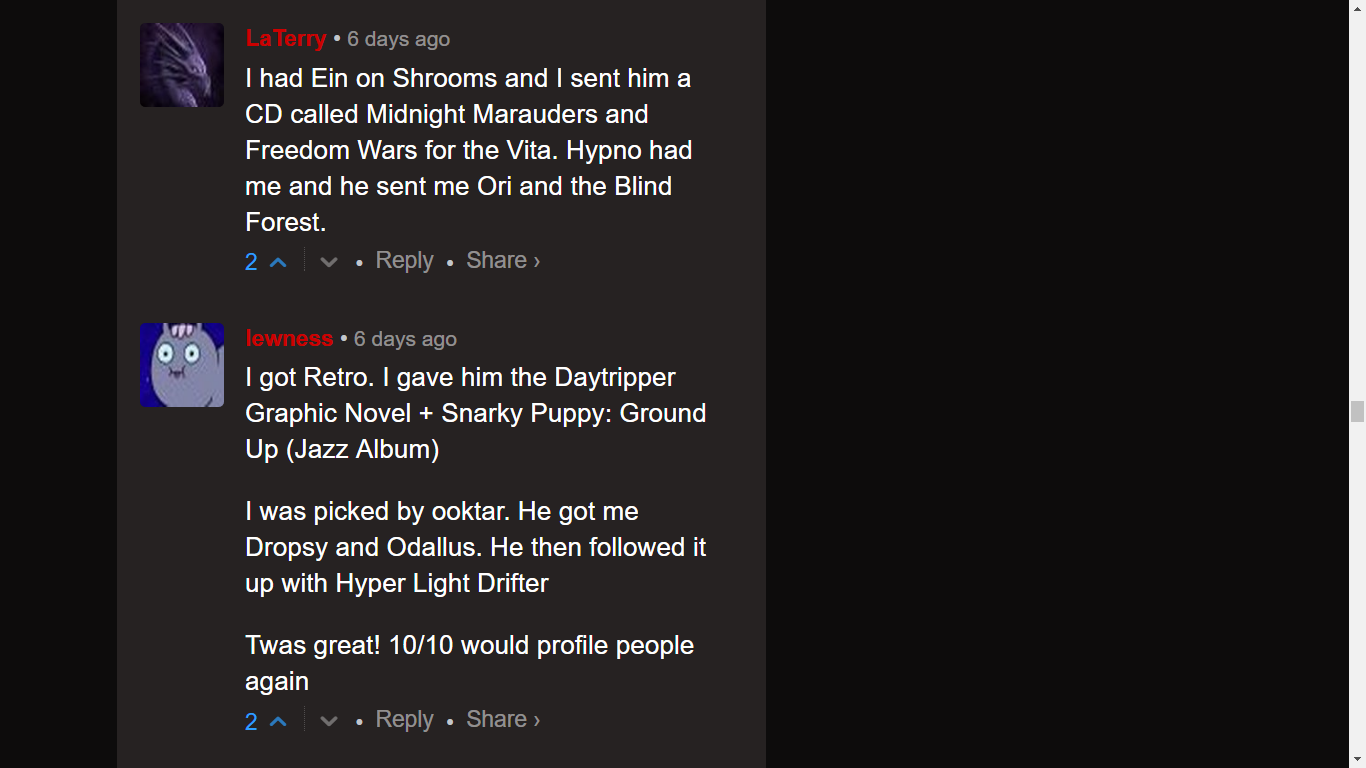 Dead Moon gift is one made with great skill and care, it's sender however is still a mystery. 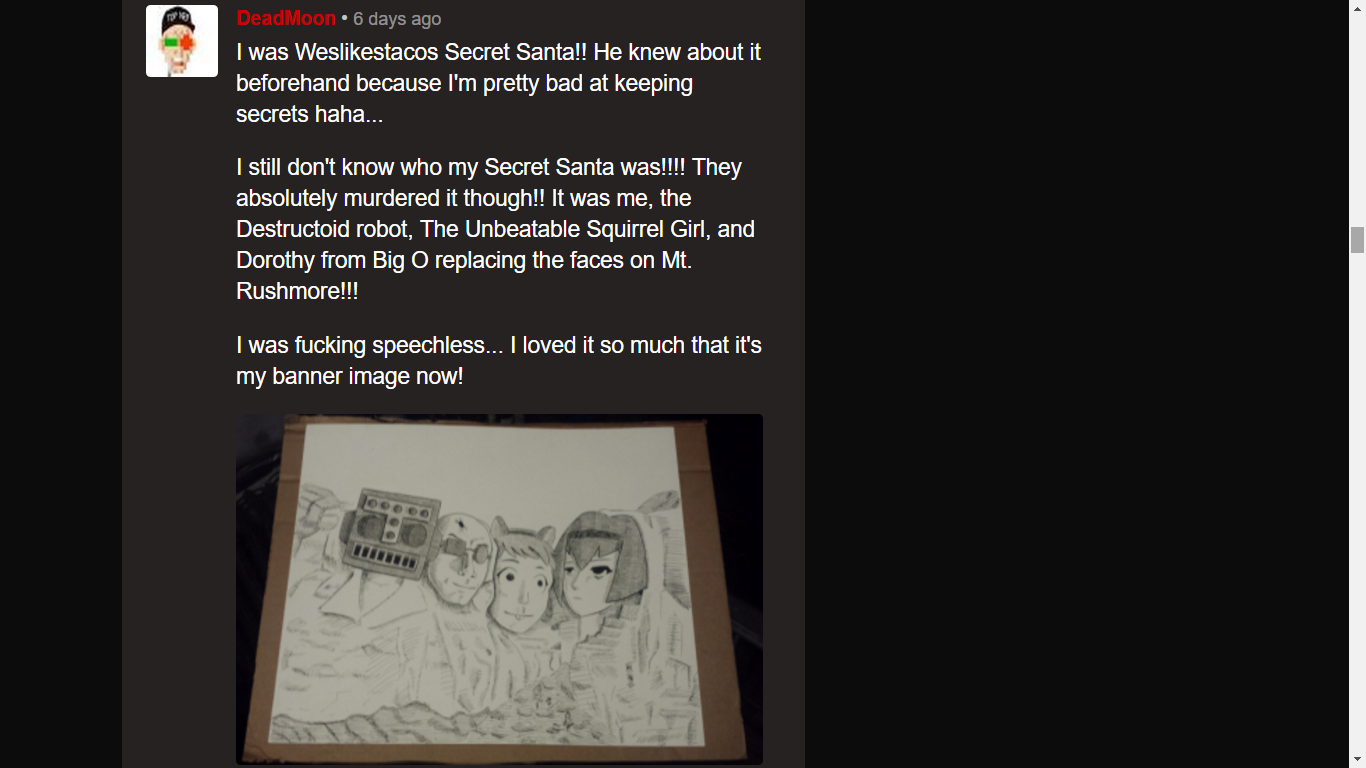 Despite some difficulties ShadeOfLight managed to get his gift out to Fuzunga. I agree that Tax should be included on the price and you are correct it's a psychological move on the part of the stores. 9 is better than 10 even if it's 9.96 (at least in most peoples minds). 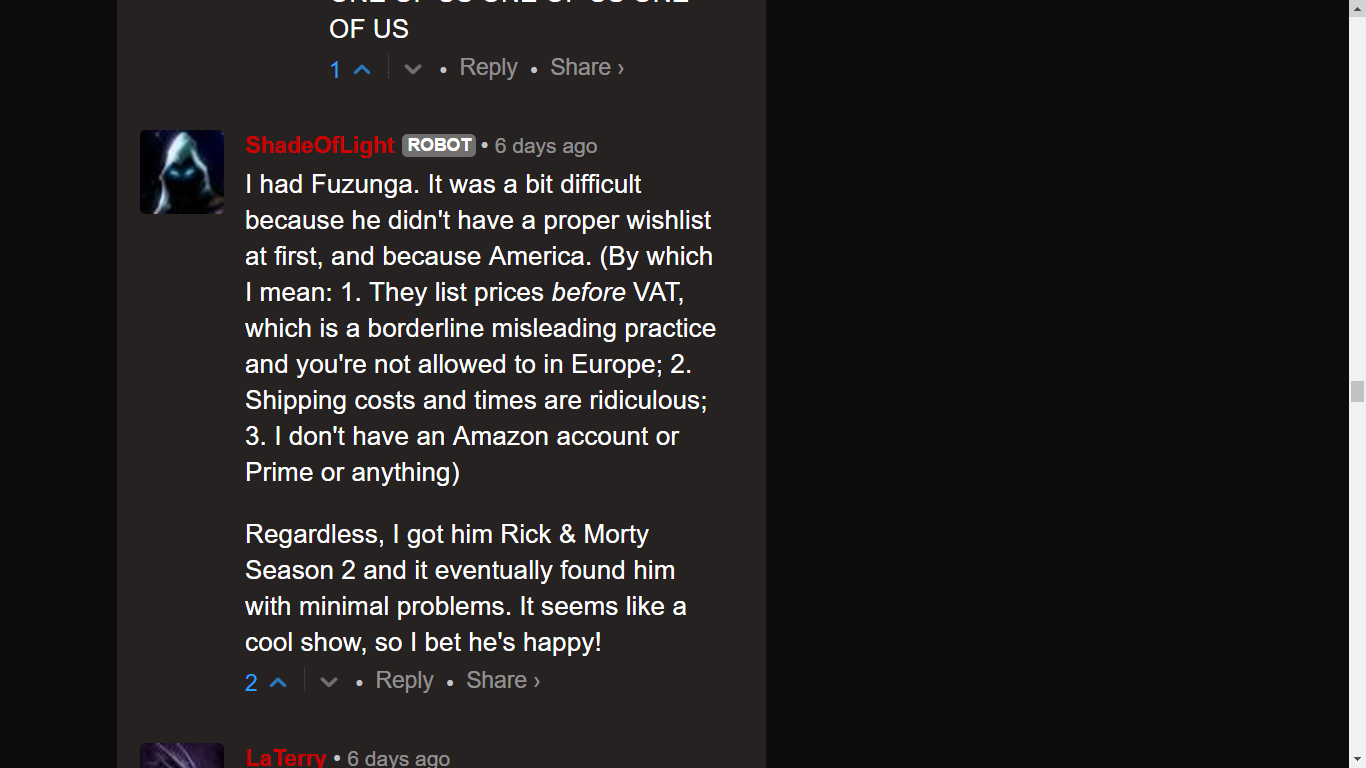 Gmana is fairly new, but it already feels like they're an old friend. He shares a bit about what he gave and got bellow. 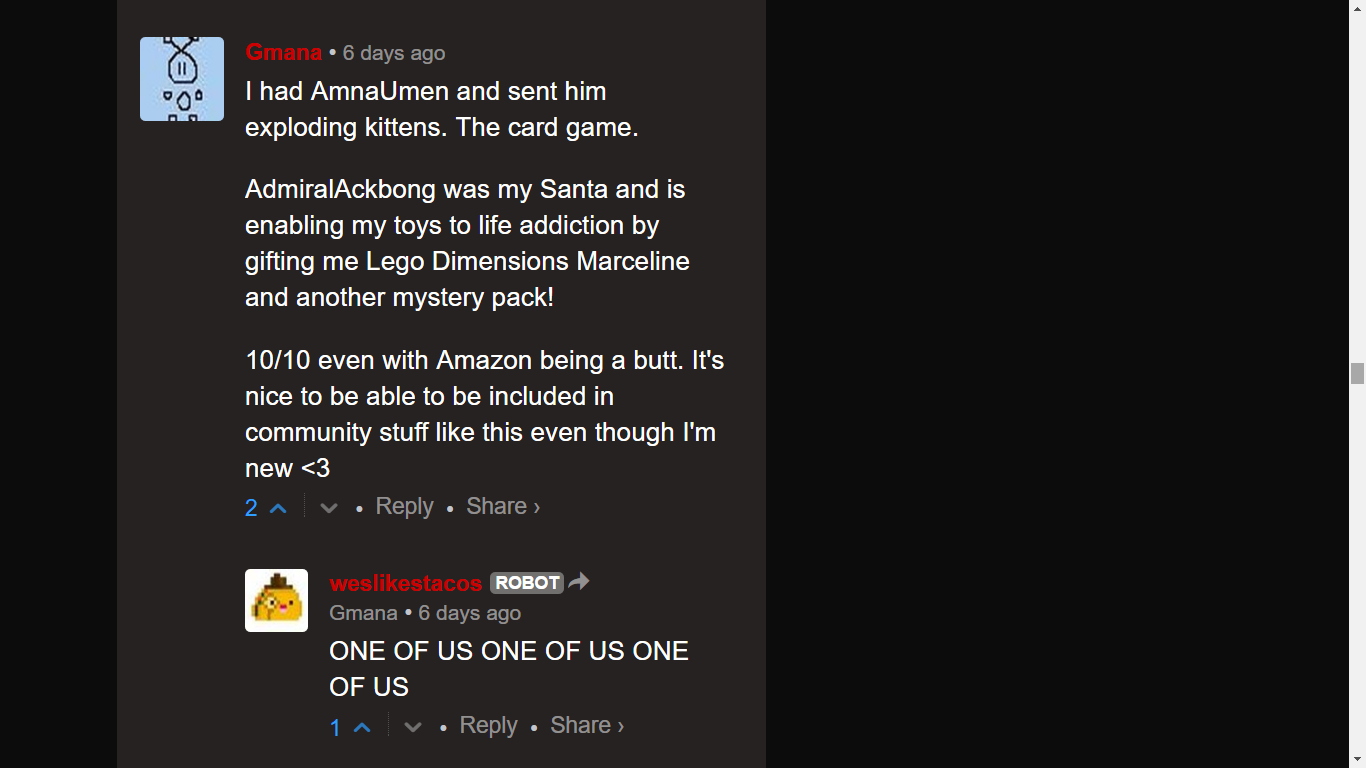 There we're more but at this time these were the responses I got, So I would like to again say thank you to everyone, including those who didn't drop a line this time around. We did have reveals in QP but a little formal recognition doesn't hurt either. You guys are great for making this a thing for the third year running.