7:52 AM on 03.13.2008 (server time)    0
Well it certainly has been a long time since we've had one of these kind of blogs!
Lately it's been Turning Point rigs, Brawl posts, Nameless Ted sucks, the usual as of late. I also realize the Hulk trailer has probably been posted 3 or 4 times already, but I can't be concerned with such things. I've been waiting too long!

Of course I wouldn't just bombard the cblogs with spam that's been posted over and over again, that's why I decided to stop being so lazy and just post these already. I have some others too, like an Arrested Development movie, but I'm afraid I'm one of the only five people in this world that doesn't like the show. First, what you guys have probably already
seen today : The Incredible Hulk


While I have been hearing about this movie for along time, one thing I don't understand is how a YOUNG Cory Fieldman is playing in this movie! Was there some sort of time warp from the mid 80's I wasn't aware of? Does this have anything to do with Doc Brown? Would
he frown upon this? You decide Destructoid. Here's the trailer : Lost Boys : The Tribe

Personally, to me it just seems like another (Buffy styled) teenage vampire movie, which can be good, except when it relies on sex, cheap scare tactics, and of course over the top gore. That's all good and fun, but don't forget the story!

Can someone please tell me how they hired Cory Fieldman from the 80's?

Forgive me Destructoid! I didn't mean to trick you into a false sense of security, with you relaxing and waiting for a Smurfs trailer. I know how *badly* you guys wanted a trailer for
this awesomest movie of 2009, but sadly you'll have to wait. Here we have a first look at the new Smurfs film which has only been given a 2009 release date. Would you guys pay 10 bucks to see this? I never liked the Smurfs anyways. A little blue people society is creepy, especially with only ONE smurfette running around. She's got to be working double time huh?

There's also some footage of "the making of The Smurfs" you can catch here if you're intrested. Stills are below! 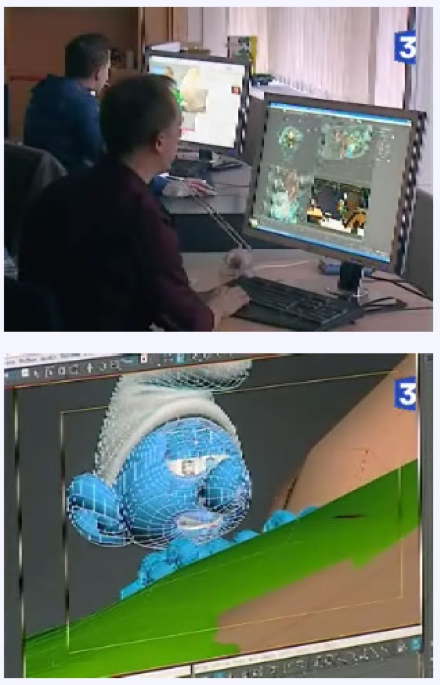 Snail trails all over your face.