Cult of the Lamb Review: In Sheep's Clothing 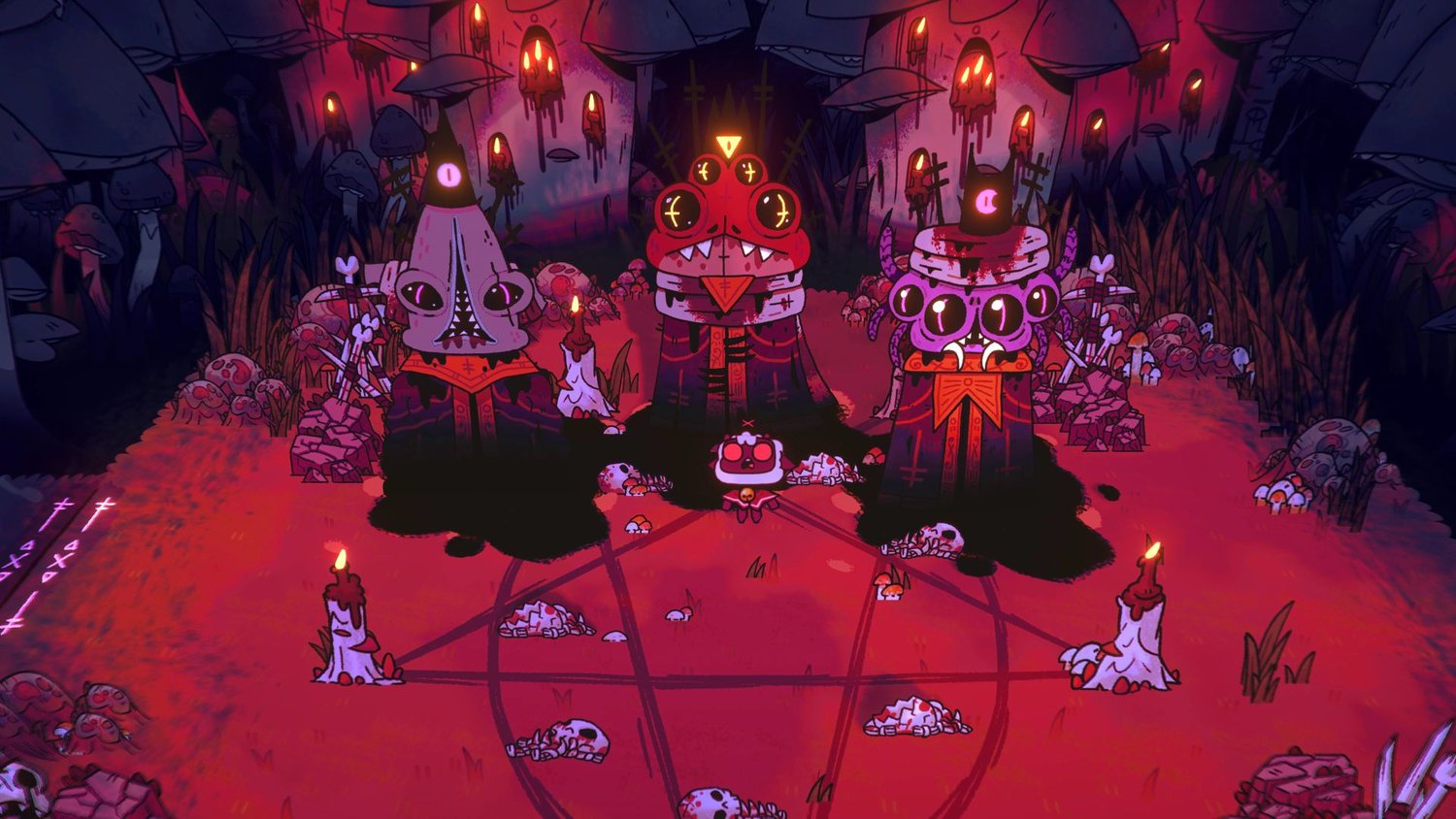 At first glance, Cult of the Lamb looks inviting, with cute, cuddly anamorphic characters, a cartoonish visual style, and an (initially) whimsical soundtrack.  After peeling back a layer, the game’s darker details are unveiled, where ritual sacrifice, cannibalism, and religious indoctrination are common themes.  With the game’s playful presentation, these sinister subjects are more palatable, but the stark juxtaposition between the cutesy art style and dark tone, reflects the very design of the game.  On one hand, the Cult of the Lamb  is a light, town building simulator, with morbid twists.  You can recruit fuzzy critters to live within your cult, build them housing, cook them meals, and design your upstart village as you please.  On another hand, the other half of Cult of the Lamb functions as a roguelite, with dungeon crawling, and slaughtering heretics.  Despite the apparent clash of these two genres, it works.  I found both gameplay loops engaging, and while it lacks the depth of other titles that solely focus on one genre, Cult of the Lamb offers enough for fans of their genre to enjoy.

Ritual feasts can keep your flock fed, and maintain their loyalty

You could either describe Cult of the Lamb as a townbuilder with roguelite elements or a roguelite with townbuilder elements and be accurate.  The primary objective in Cult of the Lamb is to build a newly founded cult, so that in due time your followers are numerous to take down rival heretical bishops that act as the game’s antagonists.  While managing your cult, players must manage resources wisely, so that their followers remain faithful and obedient.  Fail to build suitable sleeping quarters, provide enough food for your followers, or clean living space, and your flock may fall ill, die, or even actively rebel against your rule.  There is a nice sense of progression, where as the cult grows larger, more and more building unlock for construction to better manage your followers.  Your flock may have humble beginnings, but with enough effort you can build prisoner stocks to house apostates, summoning circles to transform followers into demons that aid you on crusades, or missionaries that allow you to send followers on quests to bring back resources for your cult.  There is also a surprising amount of decorative features to customize to one’s heart’s content.  For all the options however, keeping one’s cult faithful is relatively simple.  There are dozens of available rituals to perform, but since my cult was so easily kept in check, the options felt superfluous.  I would have liked to feel more challenged in holding my cult together, rather than the rather easy experience encountered on default difficulties.

Building your cult from within is necessary, but you must also spread your faith through the sword.  Crusades are short dungeon runs, with relatively simple branching paths that lead to a final boss.  Have a couple of successful runs, and you will get a chance to defeat one of the heretical bishops that rule over each individual region.  The combat is not complex, with players having a melee and limited ranged attack that varies from run to run, but it can be challenging with the amount of visual clutter often on screen.  The only complaint I can levy here is that the weapons seem particularly unbalanced.  Certain weapons, like hammers and axes, feel insanely powerful, and most runs were absolutely trivial when I was assigned them.  Others, like daggers, are an annoyance to use, offering low damage and miniscule range.  Considering that players are assigned these weapons randomly to start each run, there should have been a better effort in making sure that each weapon felt great to use.  Instead, I groaned whenever I was forced to start with an objectively bad hand. 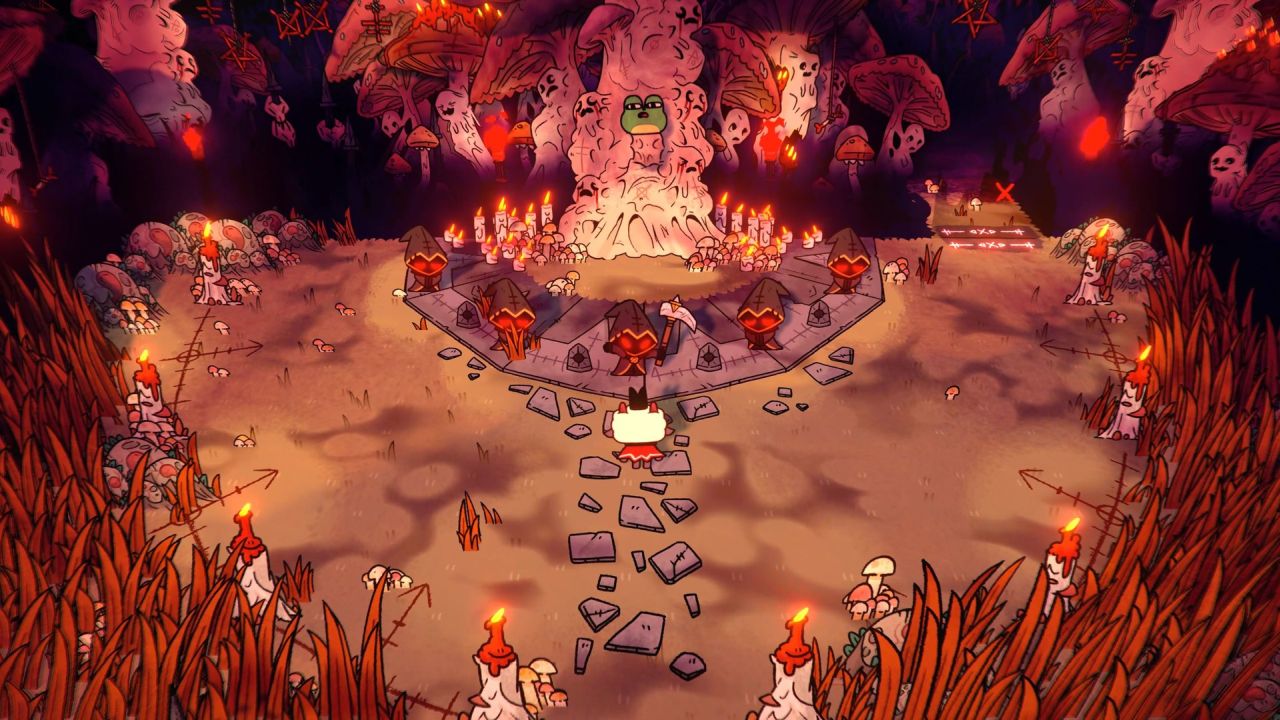 Each region is hauntingly beautiful

The art direction deserves a shout, as it perfectly encapsulates the combination of the eerie and cuddly, in a blend that is unlike what I've seen from any other game this year.  There are various cult follower designs that you can customize to your liking, and the design team nailed the character design of the various NPCs and antagonists that you will come across over the course of the game.  Overall, Cult of the Lamb does a fantastic job in establishing a distinctly dark world, with fascinating creature designs, creative decorative options, and a wonderfully strange soundtrack to tie the entire package together.

While Cult of the Lamb doesn’t nail everything in its blend between two genres, it is a pretty good effort on both fronts, to the point that most of its misses can be ignored.  If you have a passing interest in either town building games or roguelites, you will find something to latch onto.  Once Cult of the Lamb gets its hooks in you, it’s hard to pull away.