There is no doubt that the first Tomb Raider is an absolutely iconic game. Not only was it a pioneering title at the start of the 3D era, but it also introduced the iconic character of Lara Croft, one of gaming's most famous leading ladies.

However, like many trailblazing games of that era, time wasn't kind to it, and I found playing it today to be excruciatingly stiff and boring. This iconic game is best left in museums along with the artifacts Lara casually raids. 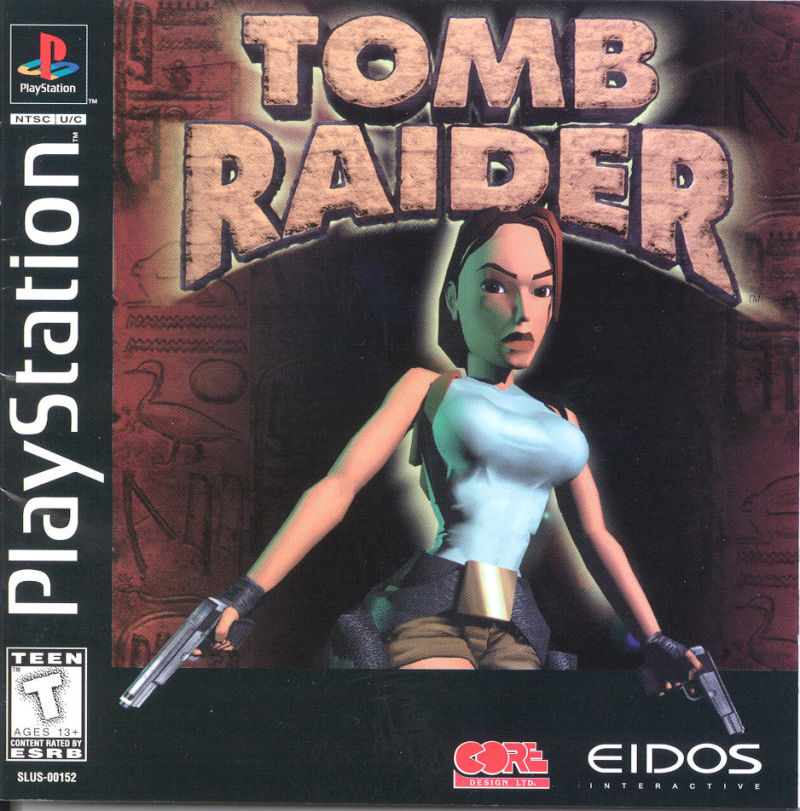 "There's this little trinket. An age-old artifact of mystical power buried in the unfound tomb of Qualapec"

Typical to games of the era, there is little to the game's story other than introducing the setting. Lara Croft is a wealthy English adventurer that enjoys nothing more than a hobbyist, and potentially destructive, archeological adventures. Not too dissimilar to a certain Indian Jones, but with more sass, shorter shorts, and a prominent bust.

Other than that, there is a vague story about powerful artifacts that you are trying to find before a certain unethical rival, and a lot of action scenes detailing how much of an action hero Lara is. These scenes do a good job at showcasing both Lara's character, and her many, err assets. 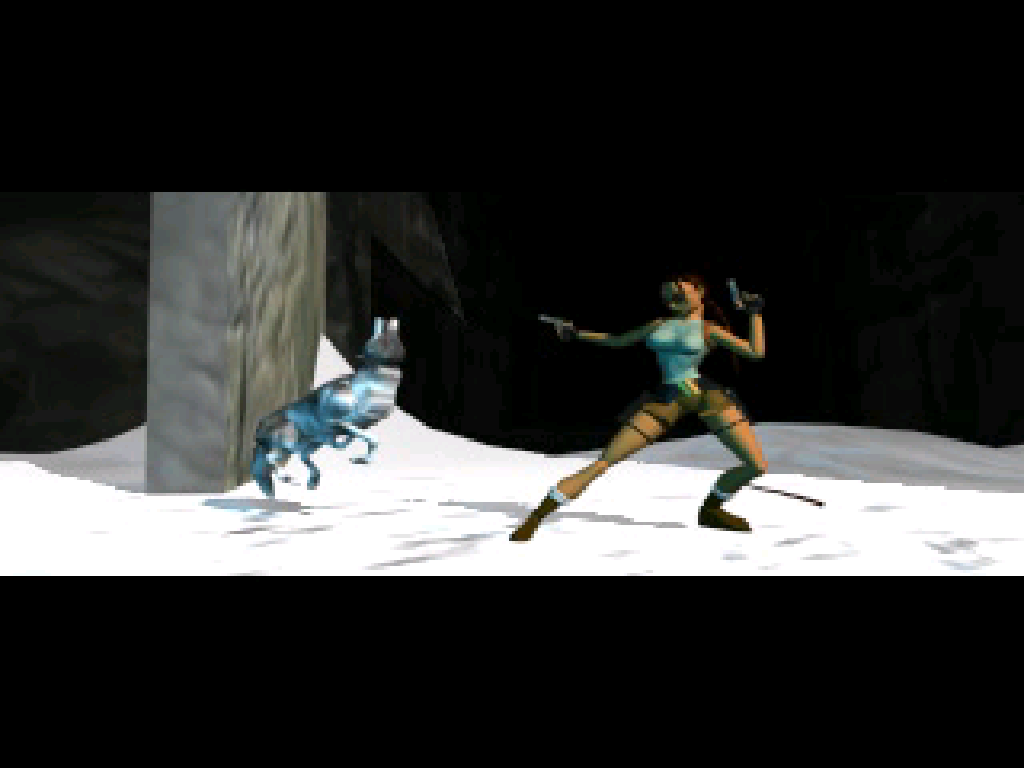 Thinking about it, Lara is a dick to animals

In-game, I feel that the team did their best with the technology of the time in creating unique tombs and place to discover, but they are not particularly impressive today. For comparison, many games featuring ancient ruins on the SNES crafted better worlds with 2D drawings and sprites.

"I'm sorry. I only play for sport"

Without much of a story, a game like this one depends entirely on its gameplay. In theory, exploring tombs, jumping around to avoid dangers and cross massive chasms, and fighting monsters with dual guns should be a fun experience, and I don't doubt that it once was. However, 3D gameplay has advanced drastically since that time, and I think the many flaws of this game can no longer be tolerated.

To put it simply, Lara's movements are stiff at best and cadaveric most of the time. Without analog controls, you are forced to use some of the more obtuse tank controls in a 3D game. However, unlike with slower-paced titles like Resident Evil, you are expected to be fast and precise with your movements here.

This becomes obvious with the jumping system, where distances, jumping arcs, and timings need to be perfect for Lara to grab a ledge with no level of adjustments made by the game. Otherwise, the idiot hits the wall, or the ledge, or the roof and gives off that annoying grunt sound. A sound you are expected to hear over and over again.

Of course, the nightmare doesn't stop with that. No, you must also contend with a poor camera and an even poorer fighting system. Get this scenario. You are in a square pool of water and a stupid bear is in the room. In order to fight the bear, you need to emerge from the pool at the opposite ledge and shoot at it. However, thanks to the bear's flawless tracking accuracy and speed and Lara's slow emerging speed, you are immediately mauled by the bear as you get out of the water. 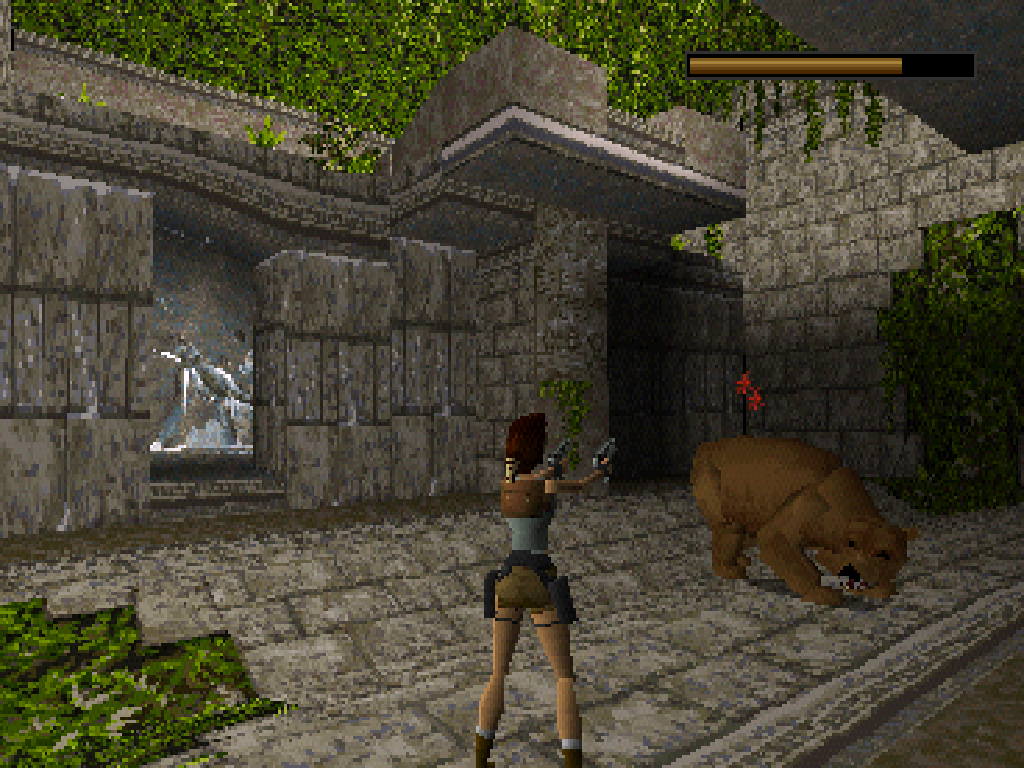 To be fair to her, some of those animals deserve it

At least the swimming mechanics are fine. This is the first game I played where the water mechanics are better than the ones on land.

As one of the first 3D games in the market, Tomb Raider is both impressive and lackluster. It's impressive from a historical point of view, but is extremely barren and poorly designed even to the standards of the time. At least when it comes to the environment, since Lara's character model is pretty decent.

On the other hand, the CGI cut-scenes are really solid, with good scene direction, character acting work, and decent graphics. They are not along with the best on the PS1 but showcase the title's pioneering work in that direction. 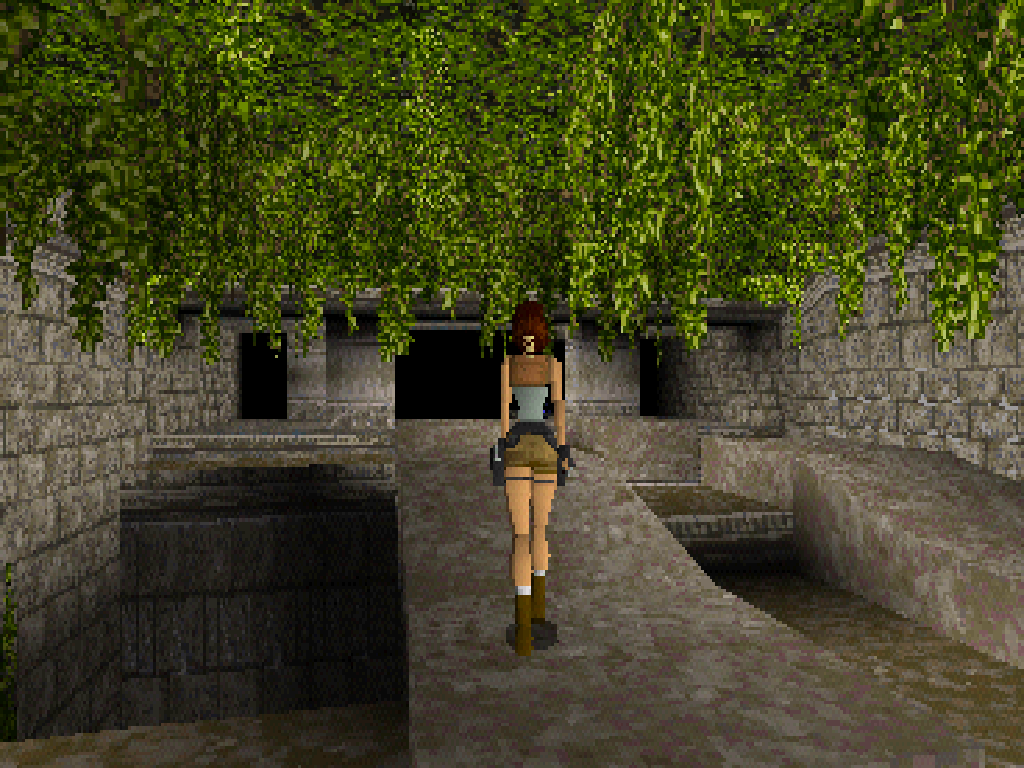 The game looks groundbreaking, for the time

Musically, the game is silent most of the time but plays some great music when the situation calls for it. Normally, that should happen more often as you advance through the stage, but thanks to the stiff gameplay, only silence would greet Lara's grunts of failure.

A special mention should be given to Lara's voice though, which is ironically haughty (besides those grunts) and builds the character even more so than the words themselves.

As I prefaced this review at the beginning, there is no doubting this game's iconic legacy, and after a long while, I remember my uncle mastered the game's stiff controls and was able to have Lara move semi-fluidly for a moment. That is until he screamed with rage at an unexpected camera shift that had her tumbling to her doom.

This is just a game that didn't age well, and consequently is no longer fun to play. 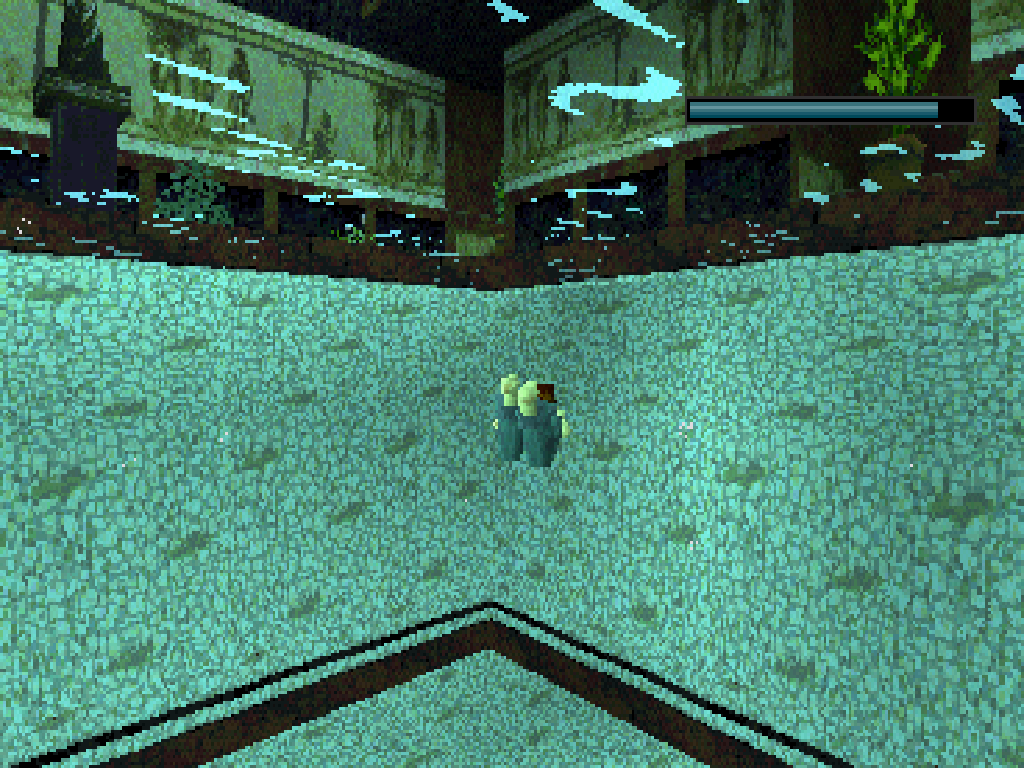 1- Make sure to play the tutorial level in Lara's Mansion to learn the controls.
2- Pull out your weapons and randomly shoot whenever you go into a new area.
3- Press "Circle" for a 180 degree.
4- Jump and hit the grab button always. 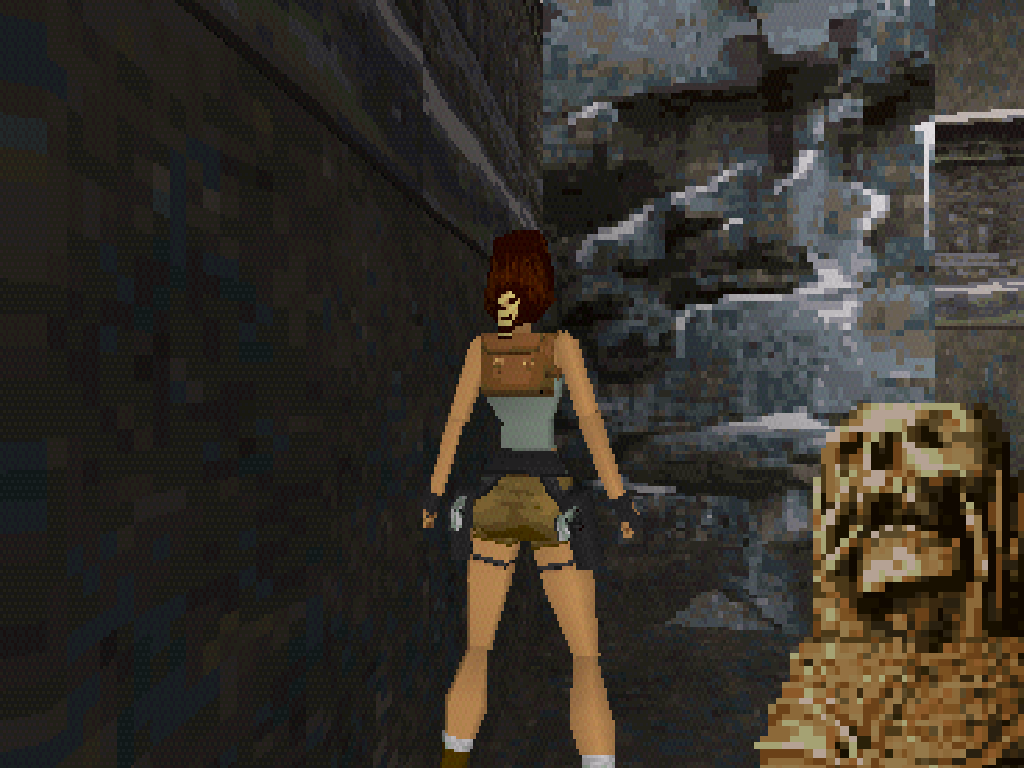 How I felt playing the game 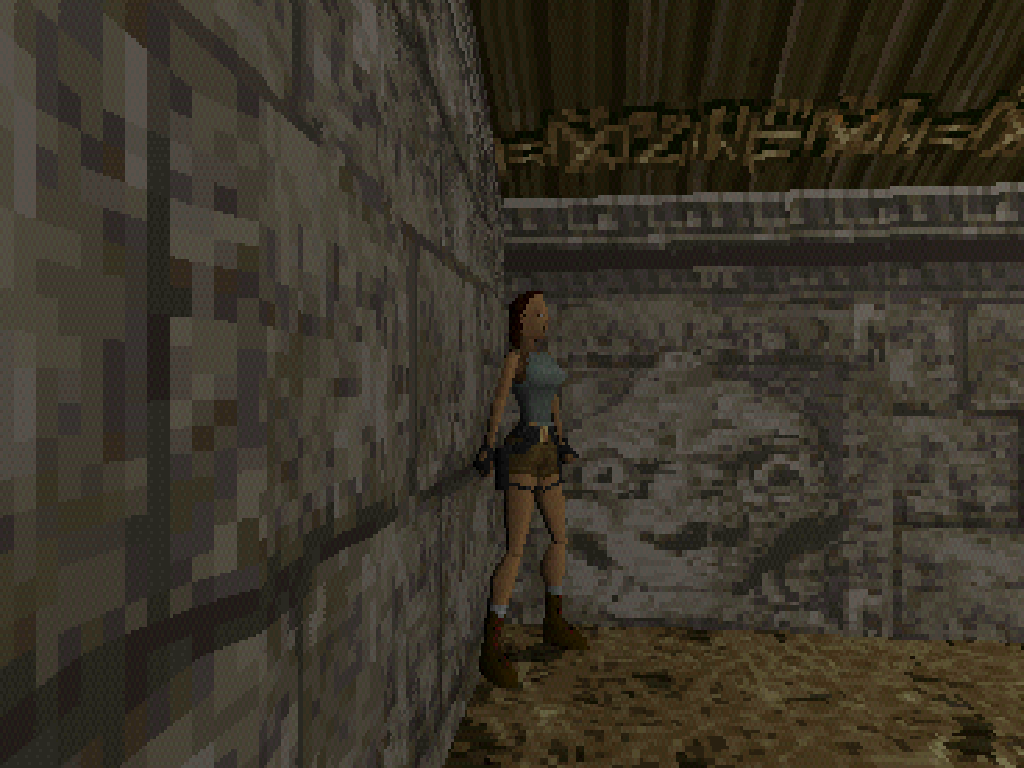 I half expected the first Tomb Raider to age like milk, as has happened with many of its 3D peers. So, in a way, this game did meet my expectations.

What I am now afraid of, given the rapid release of the second and third Tomb Raider games, is that no extensive improvements were made to this franchise. Oh well, if the next two games in the franchise, which I should review, recycled much from the first game, then I will probably recycle much from this review as well.