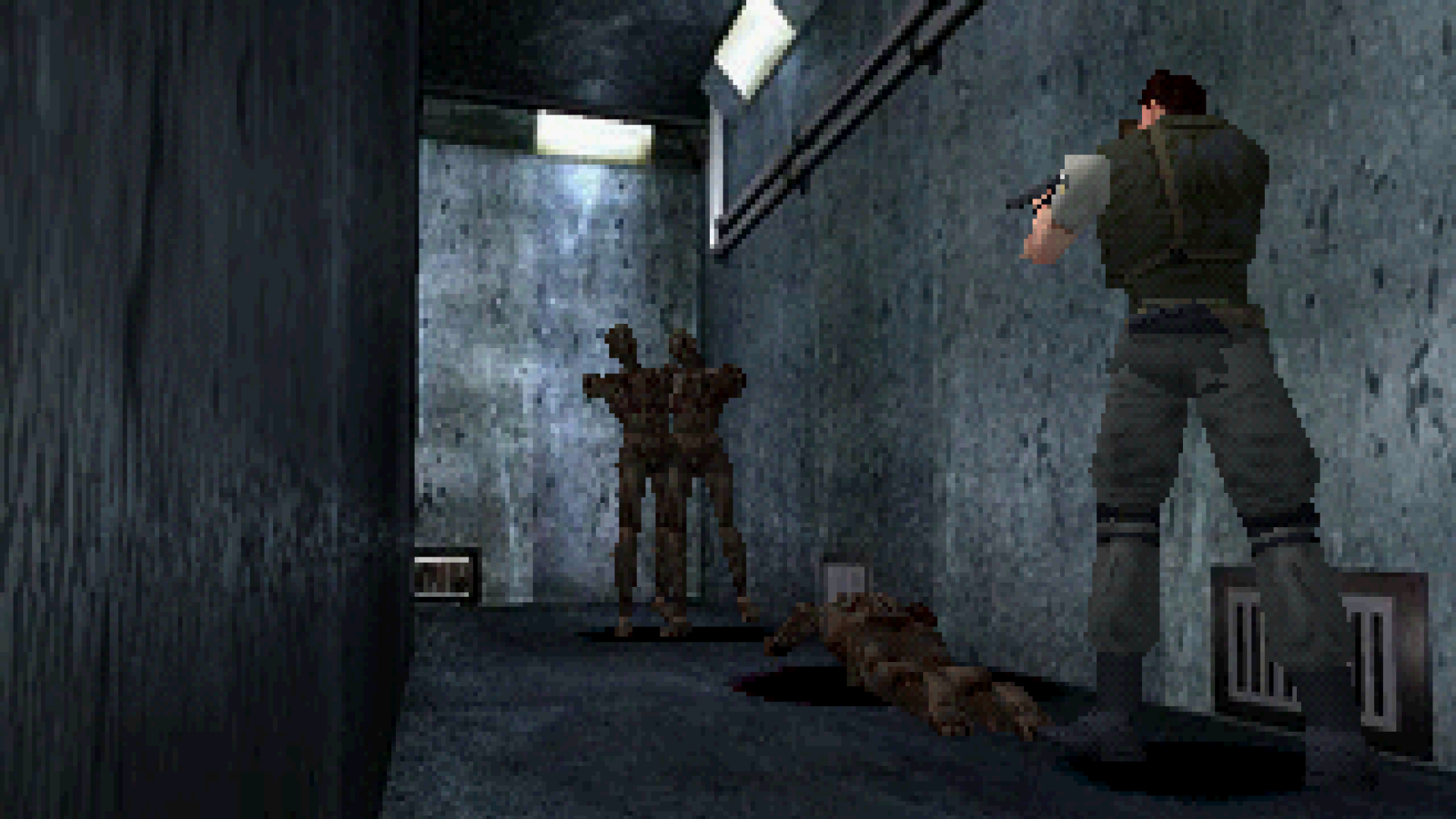 I was originally planning on just playing Resident Evil: HD Remaster and letting that be the sole representation of the first game, but I discovered that there are enough changes between this version and the original to warrant another playthrough, so here we are. As always, you can find the rank itself here or at the bottom of this blog.

It’s time to head back to the mansion that started it all. Instead of modern control schemes and character models who can emote, however, we instead find ourselves back in time. Some parts of the mansion are different, some parts are the same, but it is still the mansion through-and-through. One thing worth noting is that I initially tried to use ink ribbons for saves, but frustrations with my initial lack of adaptability to the different controls and the fact that I already essentially played through this game resulted in me using external saves instead. So with that said, let’s re-enter the world of survival horror.

Just like the last playthrough, I started with Chris, and it didn’t take all that long for me to find my stride. Well, find my stride in regards to what to do anyways. Since this game predates thumbsticks, I had to use the traditional control scheme in which d-pad up and down moves the character and d-pad left and right rotates them. Also, as far as I’m aware, this game doesn’t have auto aiming or running, which meant holding a button to run and having to line up shots though the game is pretty generous in regards to aim. Since I’ve never really played a game like this before (other than, of course, the last game), it took a lot of time for me to adjust. I don’t think this is a flaw of the game as it’s simply just a sign of the times, but I also think the modern control scheme in HD Remaster is leagues better even with its imperfections.

Controls are by no means the only change here. The mansion itself, while mostly recognizable, has some significant changes as well. Sections of the map like the graveyard and underground tunnel underneath the main staircase are gone, there are some layout changes here-and-there, some item and zombie placements are different, some storage boxes and typewriters have shifted around a bit, and the game overall seems to have less puzzles. I had some small issues with the mansion and puzzle changes compared to HD Remaster such as items being harder to see and some storage box and layout changes leading to more backtracking, but overall this version wasn’t missing anything or was really all that bad in any way. Rather, I think this version’s mansion is fine, whereas I think HD Remaster’s version is better, which is a running theme throughout this game. At the very least, the changes are similar enough to easily navigate while different enough to feel fresh. 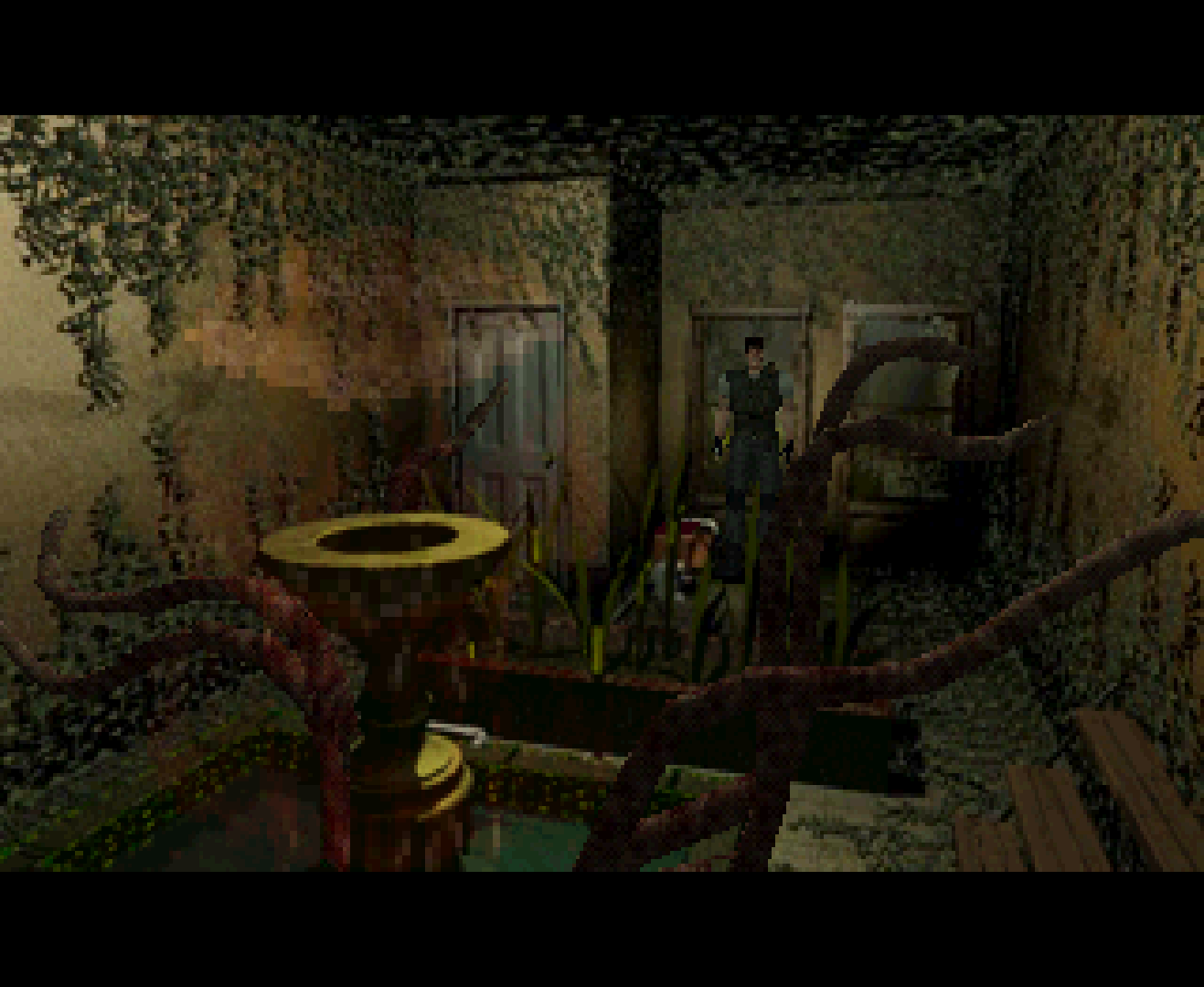 The plant room is the same, but that can’t be said for everywhere.

Zombies still roam the halls of the mansion just like its more recent brethren, but combat does see some more significant changes. For starters, zombies do not turn into crimson heads, which is a win in my book. In this game, zombies are actually much more predictable in regards to killing them. You shoot them, they go down, they come back up, you shoot them again, they drop, and that’s that. Once you see them bleed, it’s over regardless of whether or not their head pops. As a result, combat dynamics are different as weapons shift from a survival tool to a room-clearing device and empty hallways that stay empty means running around with much more comfort. I enjoyed this zombie consistency at first as I was struggling enough with controls as-is, but over time I found it less enjoyable as predictability also means less dread and horror when I know full well just how safe I am at any given time.

How zombies act isn’t the only change with combat in this game. Defensive items are gone, which would’ve been particularly helpful for me with my controls struggle. Zombies sometimes spit, which I don’t remember being the case with HD Remaster but I could be misremembering. Since there are no crimson heads, there’s also no burning, which is fine by me. I found fighting hunters in this game to be far worse, though I also found chimeras to be a bit easier, so it somewhat balances out. Finally, I found fighting tyrant on the helipad more frustrating because of all the camera angle changes and corners I got caught on. Just like the mansion, combat as a whole isn’t bad here, but it is better elsewhere.

One thing that is rather poor when judging this game on its own is some of the story elements. More specifically, the voice acting and writing. A lot of the documents (and thus, the backstory) are the same here, but the dialogue and voice acting is different and a lot worse. I found it amusingly bad, and the story of Chris and Jill are even shorter here than the other game, so it didn’t bother me all that much, but it is still worth mentioning nonetheless. What’s also worth mentioning are some of the cheesy 90s elements I found amusing in a good way, such as the FMV segments at the beginning and end of the game. Story overall plays second fiddle to the rest of the game, but I think the disparity between this and HD Remaster is larger compared to combat and the mansion. 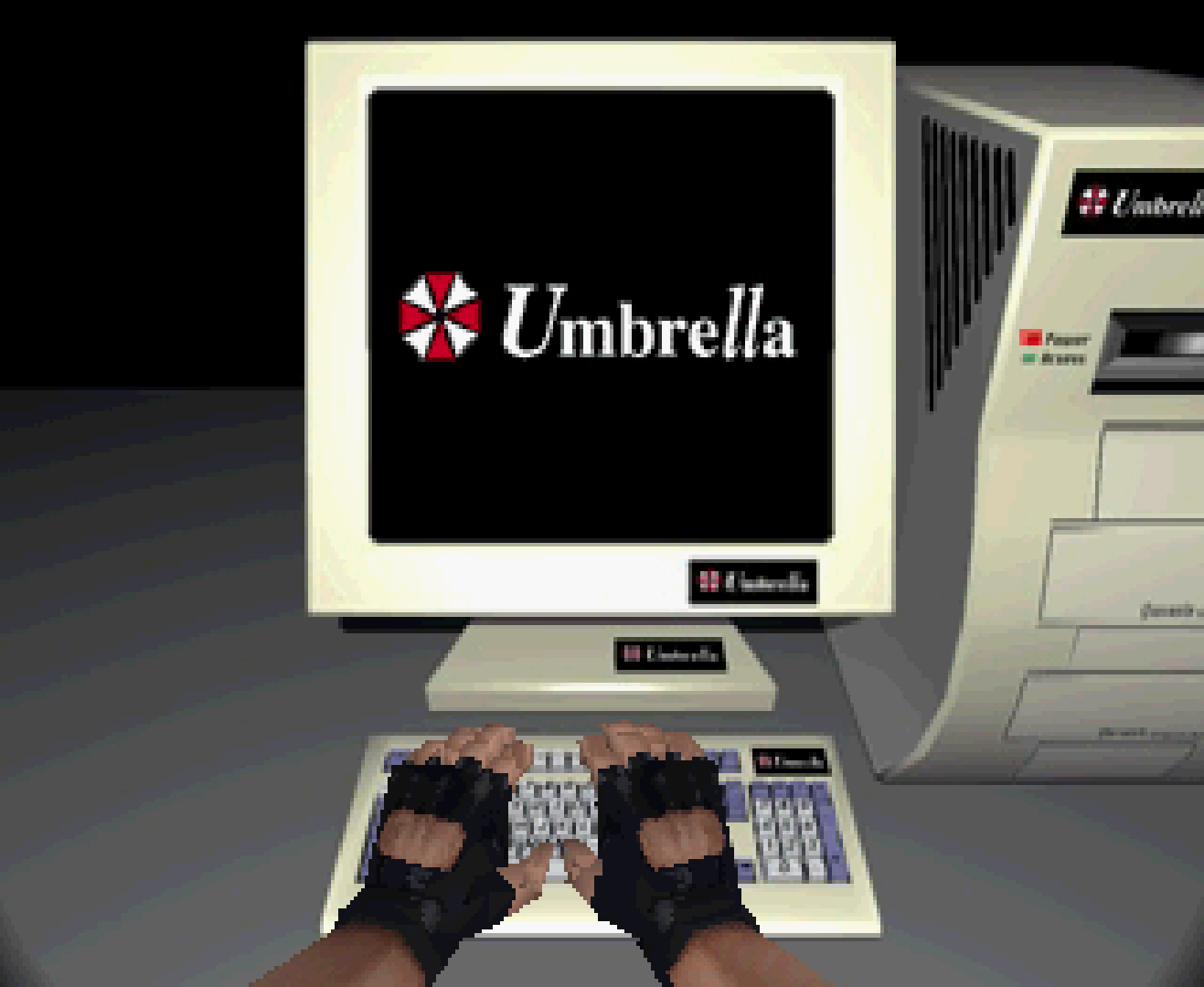 Watching Chris type on this keyboard makes up for any character development shortcomings.

When it comes to the horror aspect, I said the last game nailed by having each element of the game contribute to the horror. Rather than just rely on jump scares (though a few small ones can be found), the game instead filled me with dread and anxiety. The dread of running out of ammo, the dread of losing progress because of limited ink ribbon saves, the dread of a stormy mansion with a more sinister side to it, and so on. With this game, it just didn’t quite live up to it. Part of it was my fault for not using ink ribbon saves, but the predictability of combat and reduced atmosphere of the mansion certainly didn’t help. The game does have a few small but neat jump scares using enemies and camera angles, but they are cheap thrills compared to what HD Remaster does with its horror.

While this game mostly plays well given its age, it also has elements that have aged like a fine milk. The most frustrating one for me were the slight delays not seen in HD Remaster. Changing camera angles has a slight pause, menus are a bit slow, and there are loading screen animations for more areas like staircases. The one other complaint I have that is somewhat within this regard is that the map doesn’t include 100% completion for each room, which would’ve been nice considering the lesser visibility of items but ultimately didn’t hinder things too badly.

After the Chris Run, I of course played as Jill, and it’s in the character differences where there is the most similarity between this version and the newer one. All the changes I can think of between the two characters are the same. One thing I noticed with Jill’s run this time around is that different grenade types have the same damage for all enemies rather than certain enemies being weaker to different grenade types, but it didn’t really bother me all that much. By the time I hit Jill’s run, however, I fully found my groove with the controls and with the game to the point where I essentially one-shotted the whole thing, which I think is neat as it shows how long or short these games can be depending on how well you know them. 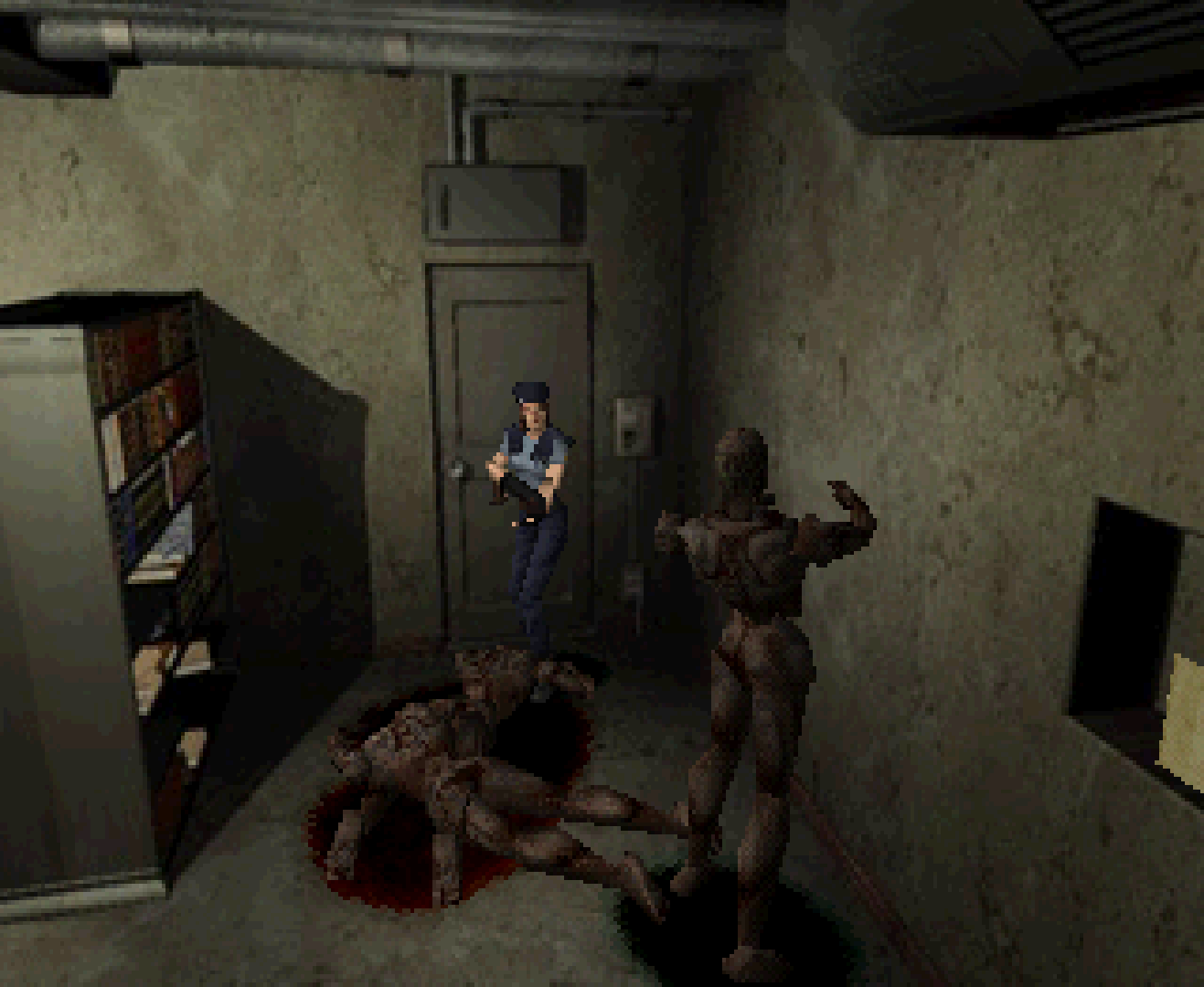 In the end, the original Resident Evil is still a great game even with over two decades on its belt. It still has that addicting game loop of progressing through the mansion, and it still kept me glued to the screen just like HD Remaster did. This game, however, does feel like a less refined version of its more modern counterpart, as just about everything from story to combat to even its horror just doesn’t quite stack up to the heights of the remake. Because of that, I am ranking this game below Resident Evil: HD Remaster in the number two spot, and I think it will be within the top half of the list by Resident Evil: Village.