As a writing exercise, I'm trying to stick to around 500 word length reviews. Feedback on the writing would be nice. 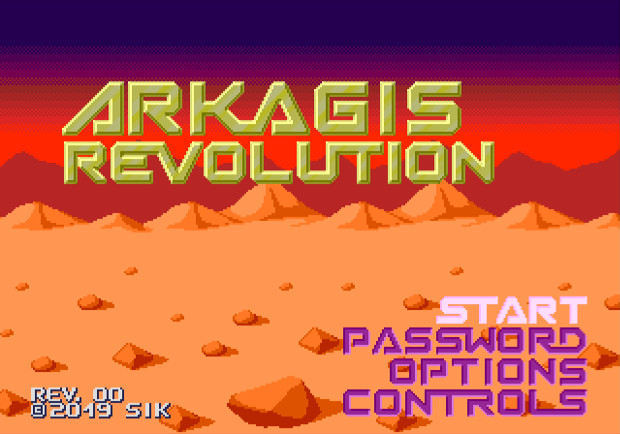 Arkagis Revolution (trailer video) is a Megadrive game from 2020 (says the Evercade menu, the title screen above says 2019) by Broke Studio and published by Mega Cat Studios, and for this review, I played it on Evercade VS and the Mega Cat Studios Collection 2. AR is a top-down shooter where the player's ship moves in mazes and caves towards a goal while shooting down enemy ships and turrets.

The unusual and highly ambitious part is that the world rotates around the player on the screen rather than the player's sprite turns. Think of the second level in Contra III/Super Probotector (Konami, 1992) on SNES or Seek & Destroy (Vision Software/Mindscape/Safari Software, 1993, 1996), and you have a good idea of what I'm talking about. A and C buttons rotate the ship, and B is used to shoot.

On SNES, this wouldn't be special, but this is on Megadrive. It's noticeably less fancy than the "mode 7" on SNES. There's not much detail outside of identical walls in the level, and these are all laid in 90 degree angles. The narrow view of the playing field might also be caused by this. 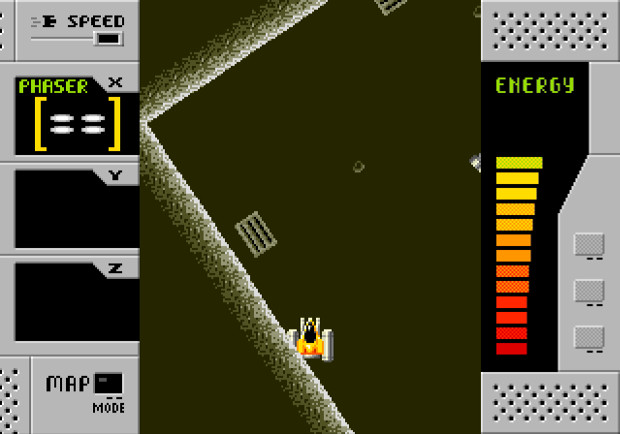 This also means that the player gets easily lost. Given how few identifying features there are in the levels, I had to frequently look at the map to even see which direction I was facing, since there was no compass outside the map view.

A good part of the dialogue is voiceacted and the sound effects tell when you've been hit or you've hit something, but the music is not very impressive. It feels repetitive, and half an hour after finishing the game, I remember nothing of it.

The plot doesn't affect the gameplay -- United Space Colonies say they're liberating your homeworld Mars from dictatorship, but in reality want to take over it. That's what the game's intro says anyway. Every now and then there's some non-interactive dialogue between the player and some other cast members, but the characterizations are thinner than paper. Then again, this is not why to play this game.

Finally, the game is rather short. The regular enemies and levels pose little threat on the medium difficulty, and the few bosses are about the same: keep shooting while reversing and turning, leading the boss in a circle. The final boss marked the first and only time I died in my first attempt at the game. Maybe relating to this brevity there is a speedrun option, which will keep track of the playtime.

On the harder difficulties (normal is 3/5) the game becomes noticeably more challenging, which is the way I would recommend playing it. On the hardest I actually couldn't beat the first boss on my first go.

In conclusion, Arkagis Revolution has an impressive graphics engine, but it carries the game only so far. The level design is bland, there's not much enemy variety and the game affords only a small viewport and few differences between rooms. I wouldn't have wanted to pay the full price for a Megadrive cartridge, but on an Evercade bundled with other games, it's good enough for a playthrough.

EDIT: Added the name of the developer (Broke Studio)