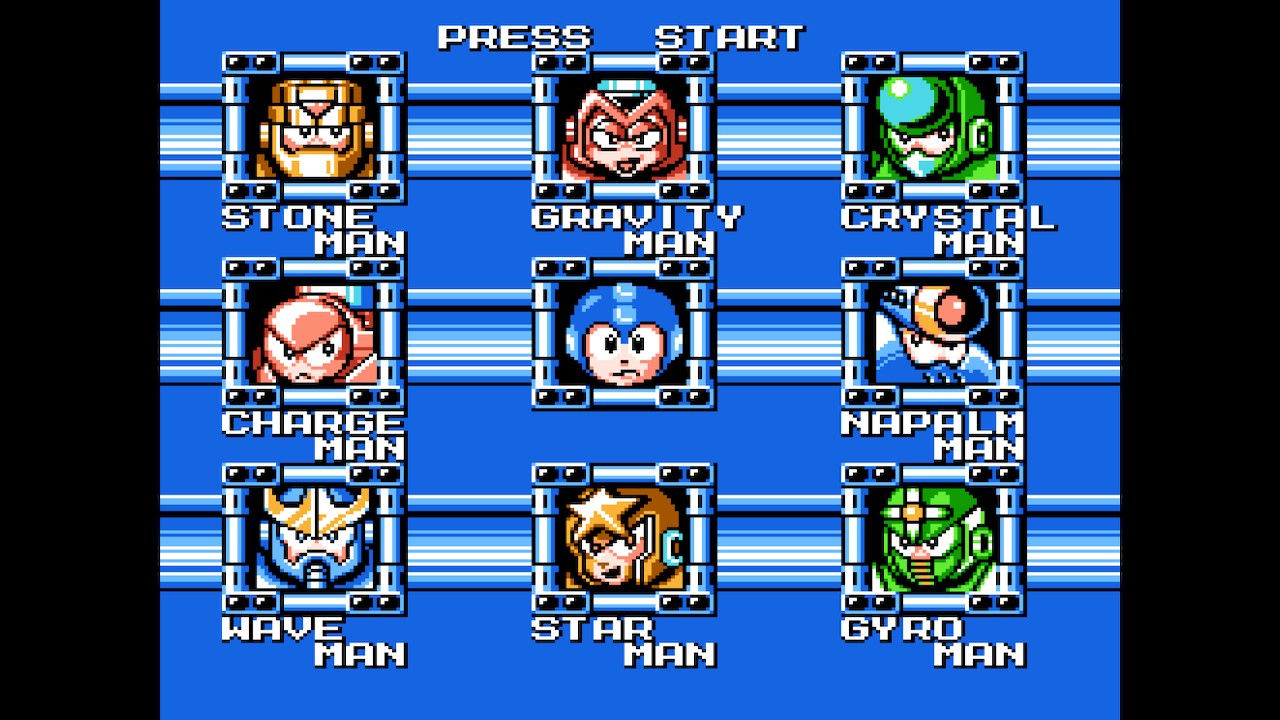 At this stage, the SNES was picking up steam, but the NES still kept an audience. As Capcom worked on the first SNES Mega Man game, they also were still making games for the NES. In fact, according to Keiji Inafune, the famous designer who started having more of an influence on the series at this time, the NES games were used to train and test upcoming talent within the company.

Mega Man 5 was a direct continuation of the last game, but with bigger stages, better graphics, more complex music, and a bigger Charge Shot. As such, all my complaints about Mega Man 4 still ring true in this game, but it's generally much better across the board that some of its design flaws are mostly excused.

If anything, it's clear from this game that Capcom just figured out how to maximize every ounce of power the NES had. Or, to be more precise, they were building cartridges that maximized what could be done with the NES (but not to the extent Konami did). The game is graphically brilliant with a soundtrack that is amazingly multi-layered. Sure, the weapon charge system still messes up the sound and some visuals, but to a lesser extent than before.

Another aspect that the game continues from the last is the increased involvement of the story. Featuring an evil turn from the enigmatic Proto Man, Mega Man must try and save the kidnapped Dr. Light and figure out the intentions of his "brother". The US advertisement latched into this plot more violently than the Japanese ads did, imploring you to "help Mega Man turn Proto Man into spare parts". Goddamn, why so violent? 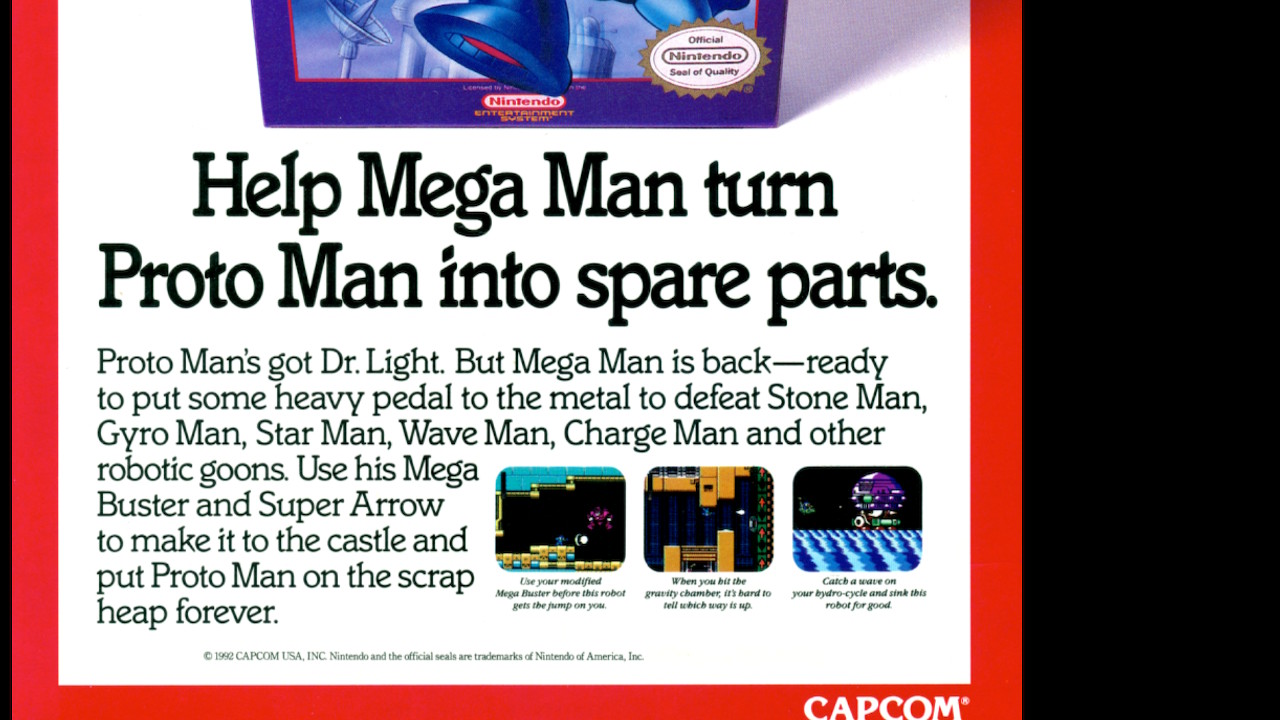 So let's check how easy it is for Mega Man to put some "heavy pedal to the metal" and defeat all of his new foes:

The first thing to note with this game is that the team still didn't figure out how to balance the game to accommodate the Charge Shot. It still is your most powerful tool, which encourages you to do all of your movement maneuvers while holding down the shoot button to charge. In fact, if anything, the Charge Shot is actually bigger in size now, and consequently more powerful. Now, the boss weapons are almost useless.

Thankfully, this reduction in difficulty is at least counteracted by a more interesting level design in this game. Nearly half the stages have a unique obstacle that is thematically appropriate. From the gravity flipping mechanics of Gravity Man's stage (which will become a staple of the series) to the zero-gravity areas of Star Man's stage, there are a number of new and interesting stage hazards to overcome. 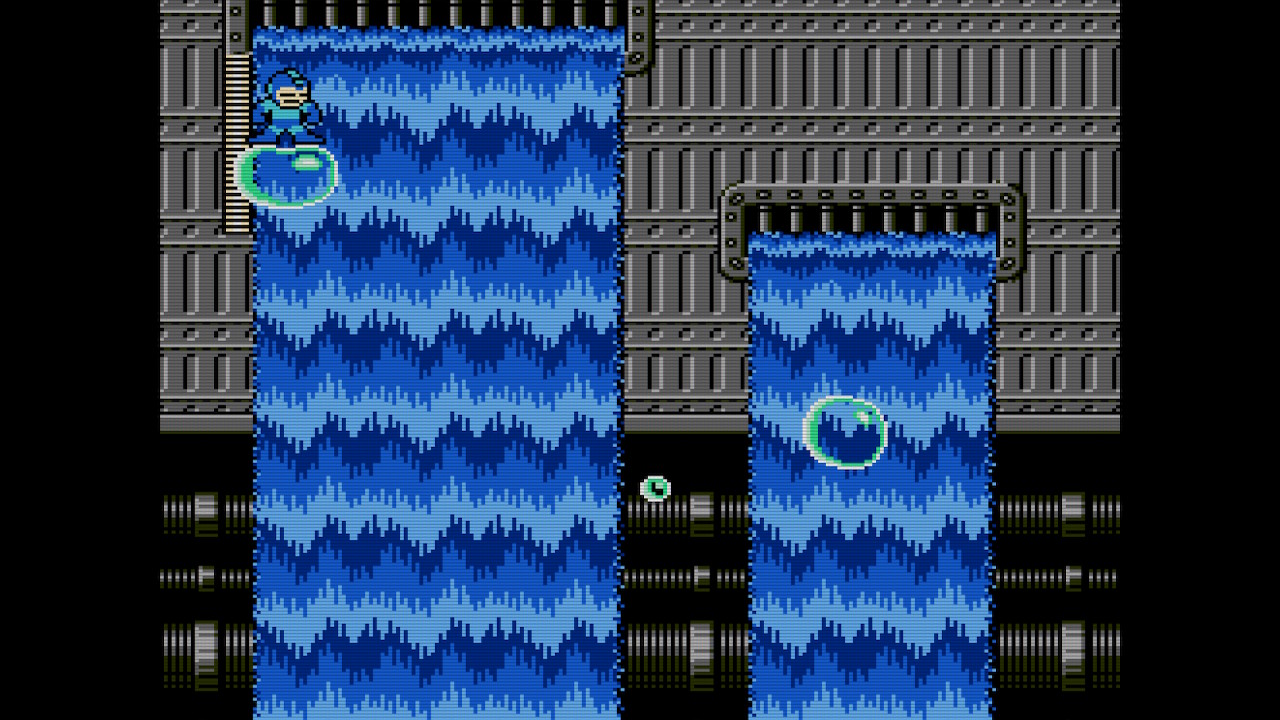 Fans of the game will remember Wave Man's stage the most since it also introduced the franchise's first vehicular auto-scroll section with a nice jet-ski ride through the waves. Yet, even before it, there are interesting water-based obstacles, such as the trusty current mechanic, and the new bubble platforms section.

Generally, all stages flow really well, with appropriate length and challenge that compensates for the thumb cramps. Especially with how much the background graphics advanced in variety and detail from the last game. From the jungle backdrops of Napalm Man's stages to the neon colorings of Crystal Man's, it is the best-looking Mega Man game yet. 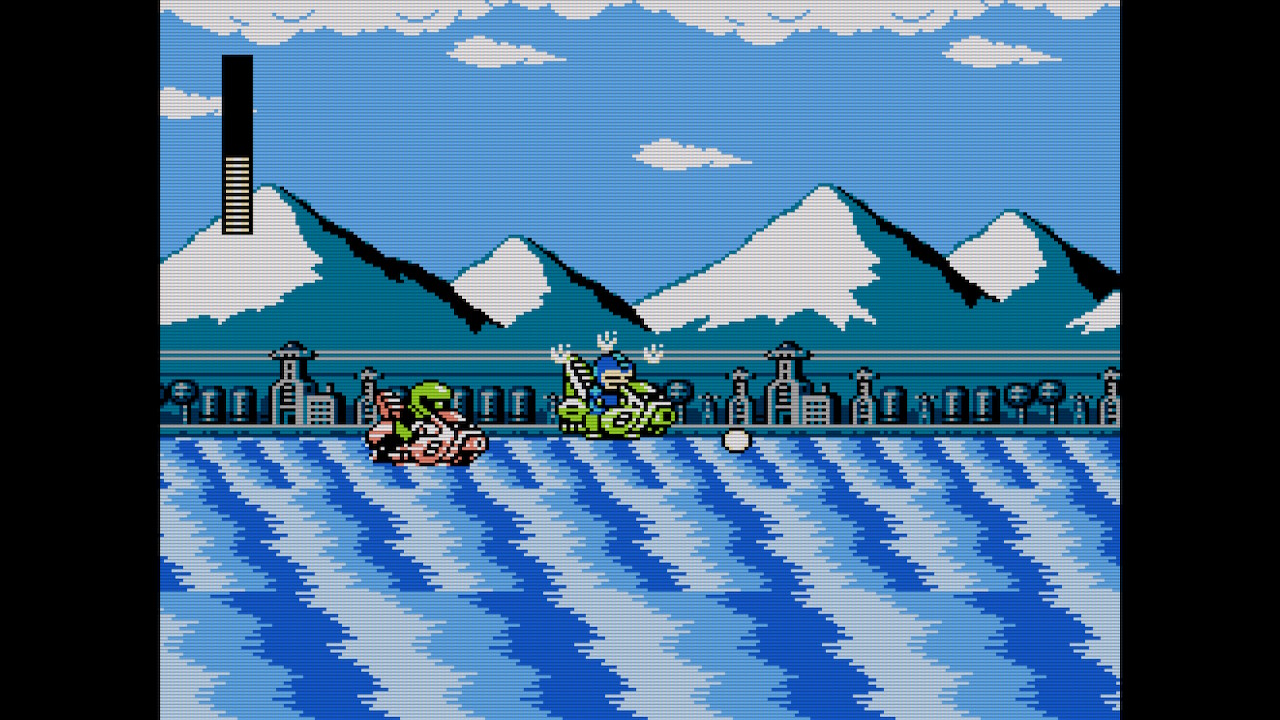 It all comes to a head with an expertly constructed set of castles that combine various elements of the eight Robot Masters stages into a cohesively interesting and challenging set of levels. 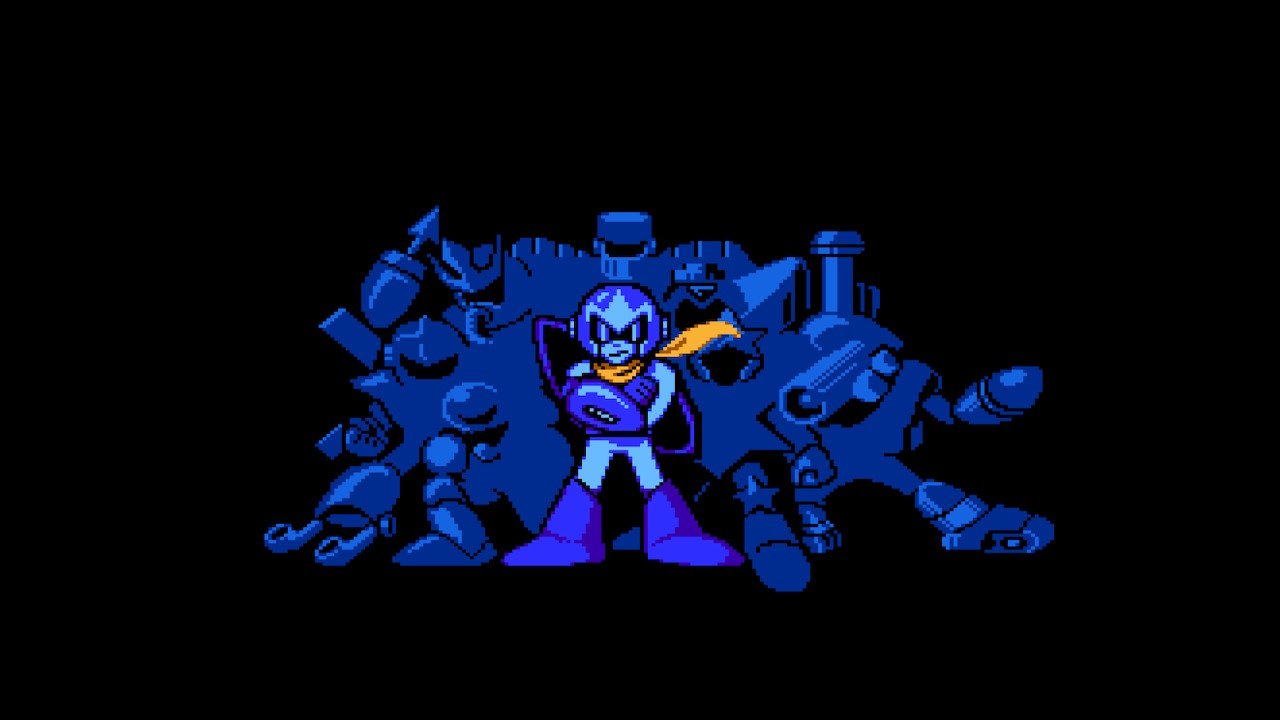 Simply put, the Charge Shot reduces the utility of the boss weapons to such a degree that some bosses are easier to defeat with the Charge Shot than with their own weakness. That's mostly due to the awkward angles of weapons such as the Napalm Bomb and the Power Stone, or the risk application of the Charge Kick, but it's never good to dilute one of the franchise's signature aspects.

Still, this doesn't mean the fights are trivial at all. The bosses are still a challenge and a highlight of the game, even if they feel a bit easier than the last two games. Especially when you consider their limited patterns and generous tells. It's less of a challenge, but they haven't looked or animated as good as they do here. With a more complex sprite design, the bosses embody their theme to a high degree.

For example, Charge Man is shaped like a steam train engine, and you can see him vibrating when charging at you, and then when he ejects coals from his chimney. Naturally, his stage is set atop a moving train. The other bosses all have their own animation quirks, and these do actually make the battles easier since they help you identify patterns and react to them. 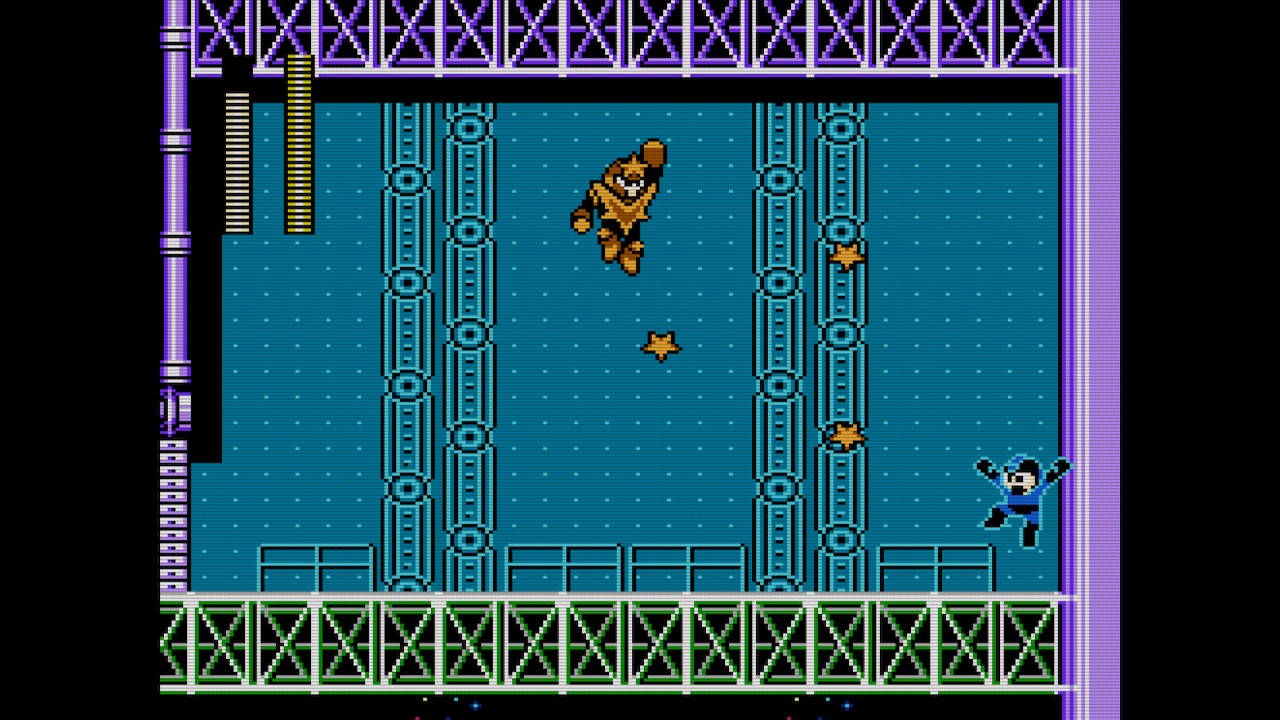 An interesting part of the Castle bosses is that they are divided into two parts. The bosses in Proto Man's castle are designed more like suped-up Robot Masters, while those in Wily's castle are the usual large sprite bosses that have unique gimmicks or puzzle elements to them. One annoyance in these fights, which was also present in some of the previous games is when the Castle bosses share the same weakness. It forces you to grind for energy pellets since you don't recover weapon energy when you die (this could potentially block you from beating a boss unless you have enough health tanks).

After the relatively subpar soundtrack of Mega Man 4, its not difficult to offer a better soundtrack in the next game, which is certainly the case here. Yet, there is more to this soundtrack than simply being better than the last, for better or worse. Mari Yamaguchi came up with more technically complex tracks than have been heard in the series before. Some of these tracks, which we will explore below, worked really well. However, just a little less than half of them are maybe too complex. As such, the instrumentation and the melody suffer thanks to the limited range of the NES sound as well as the sound effect interruptions (especially with the ever-annoying charging sound). 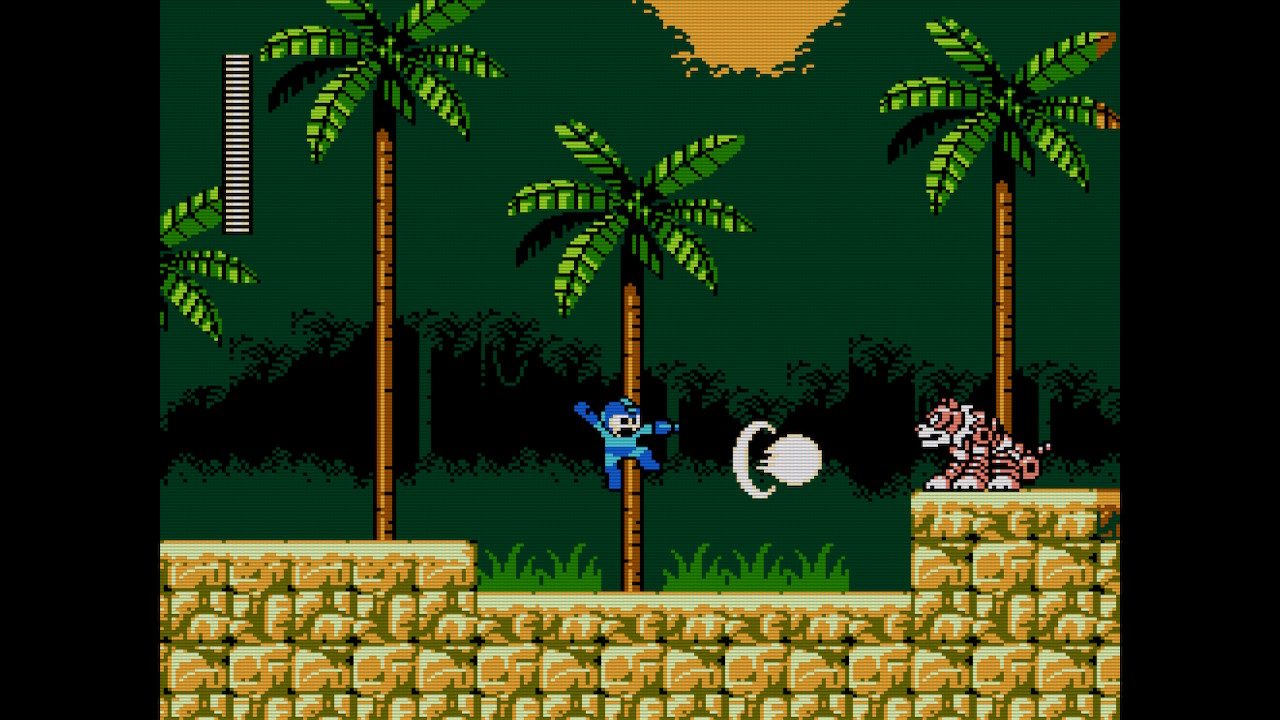 When you enter Napalm Man's stage, you will immediately realize the inspiration of the name and the character's when you look at the Vietnam-inspired tropical background. If that doesn't grab your attention, then this track surely will. It starts with a 70's electronic queue that wouldn't feel out of place in the tracks made by pioneering bands such as Tangerine Dreams for movies like Sorcerer. Then the heroic melody starts, and it drives you forward until another electronic section changes the melody. In the second part, the heroism is a little more desperate, which I guess fits the theme of the level, giving the track a more complex range that is obvious throughout. It's worth noting that this track has a great remix in Super Smash Bros. Ultimate.

For the second game in a row, Wily's castle is the second castle you go to. However, for the first time in the franchise so far, both castles have a single theme each. That's fine when the tracks are as good and complex as this one. It starts with a typically determined intro until it goes into the dramatic melody, which is accompanied by the same determined beat. This dramatic melody reminds me of the one in Mega Man 3, but this one is accompanied by a slightly more upbeat countermelody that both differentiated this track and does wonders for it. Several fast arpeggios accentuate the drama in the melody, but my favorite part is the back and forth at the 40 seconds mark, which just sticks the track into my memory.

As with many tracks in this game, it begins with a high-energy intro that doesn't loop back. What is surprising here is that the track actually goes into an even higher energy melody as its base. This melody is more dramatic than triumphant, with a sharp backing arpeggio that gives it a menacing edge. In the second part, with the absence of the countermelody, it turns more triumphant and heroic. It's a track with some complexities but is simple enough that it isn't hampered by the NES's sound limitations.

According to Keiji Inafune, the team at Capcom was satisfied with not adding any new mechanics to the game and instead chose to go bigger and more complex with the overall game design. That's perfectly encapsulated by the changes to the Charge Shot, which is now bigger and more visually impressive than before. 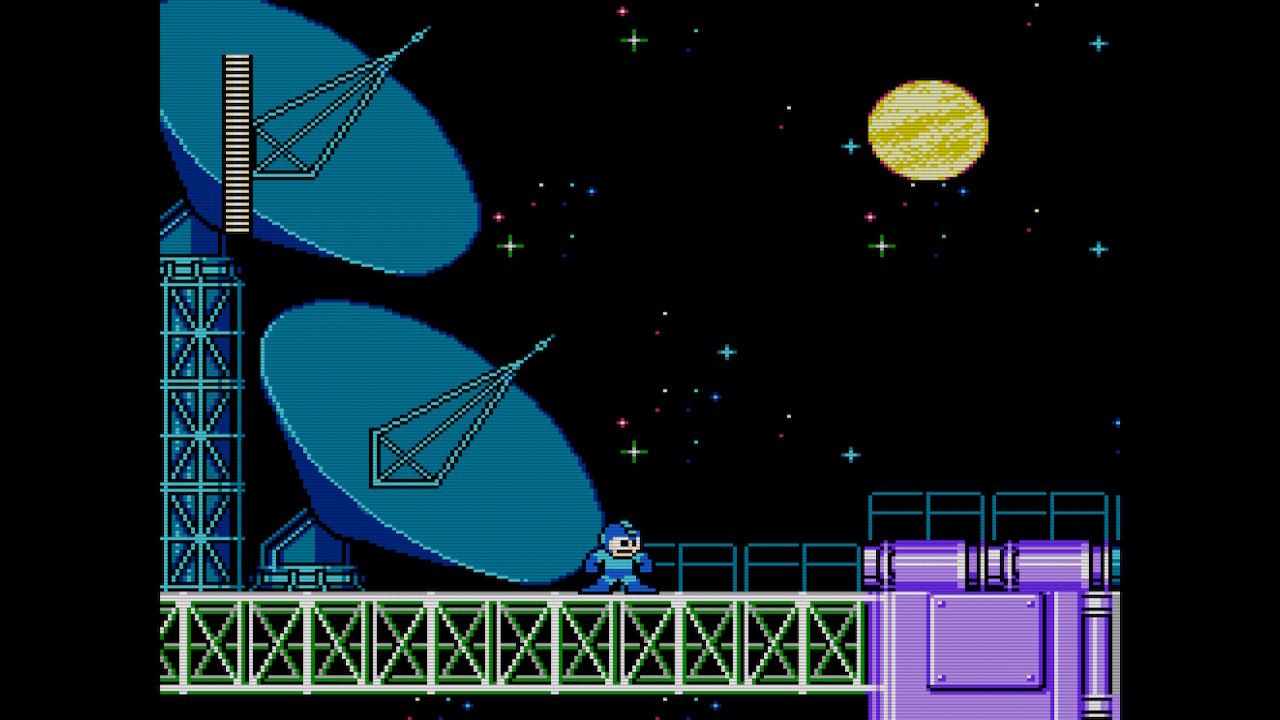 So, with this approach, this game improves on Mega Man 4 in almost every way, but still retains some of the major shortcomings of that game. I still think that the Charge Shot is yet to be implemented correctly in this game, and as such the full range of improvements that were made are less impressive as a result.

Of course, that's only in relation to the best games in the series, since Mega Man 5 is still superior in visuals, sound, and mechanics to many if not all of the games in its genre at the time. Even some of those that were released in the early days of the SNES. 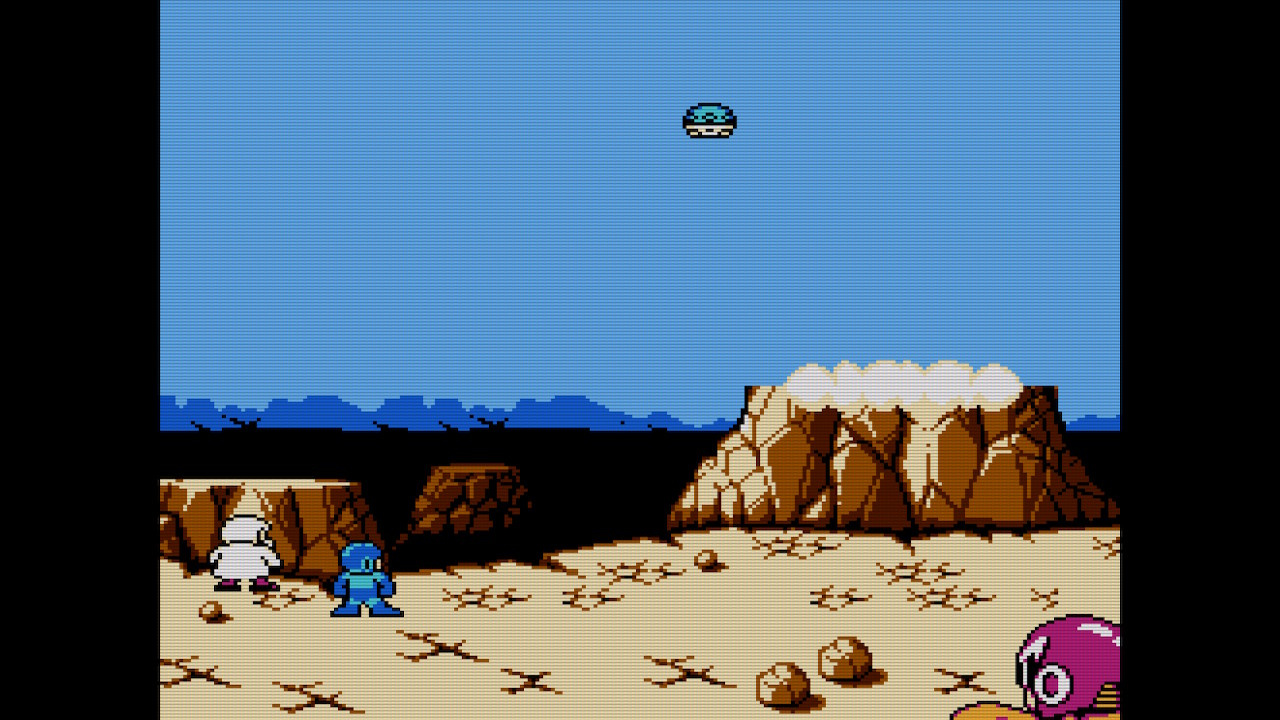 Rankings: Despite all of its qualities, I don't think Mega Man 5 deserves a spot above the expertly balanced Mega Man 3 and the revolutionary Mega Man 2. It does manage, however, to be more recommended than the first Mega Man game.